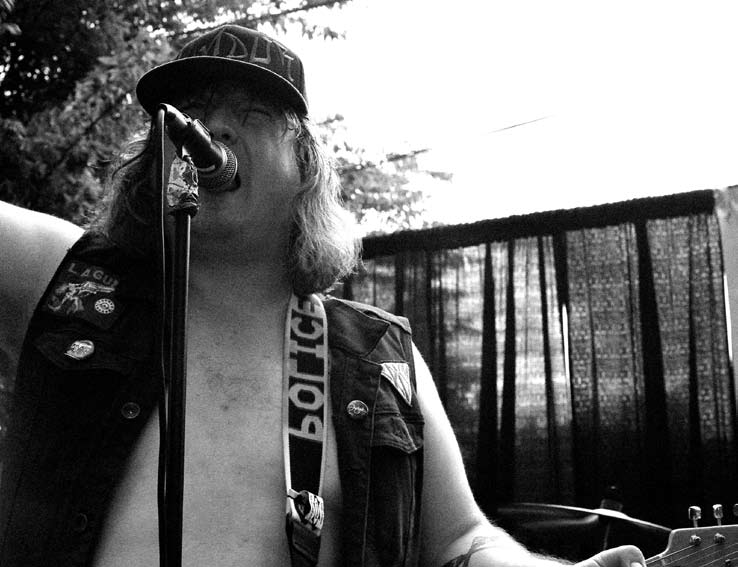 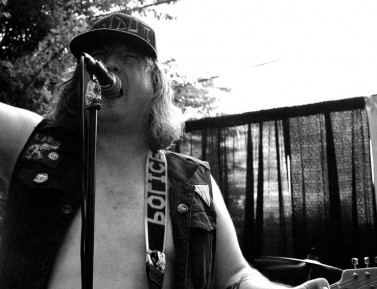 Note to self that I still like rock’n’roll music.

This year’s Gonerfest featured the most thoughtful lineup in recent memory, in that it represented the current musical taste of Goner Eric and Zac (from here on out referred to as “Zeric” or “Erac”) to a tee, I think. Pretty much an even mix of Killed by Death punk; Kiwi indie pop (but from Australia… lots of Australians present); powerpop; garage-pop/psych; and loosey goosey rock’n’roll, Memphis-style and King Louie-style. And as always, good times  and great food.

This year’s eats scorecard went something like:
Payne’s bbq visit: 1 / Cozy Corner: 0
Taqueria La Guadalupana: 1 / Gus’ Fried Chicken (same street): 0
Soul Fish visit: 1 / Ellen’s Soul Food: 0 (Unfortunately. Ellen’s moves around a lot for some reason; and if I lived in Memphis, I would want to know what was going on with them all the time. Best pork chop, cornbread pancakes, etc.)

The Eddie Money of powerpop, Paul Collins  (L.A.), rocked the gazebo just outside the Goner record  store to start things off. I wondered if Paul Collins really is Paul Collins or just some middle-aged working man-type guy who said “Hey I kinda sound like him!” Whoever he is, I support his efforts to revive ‘his’ solo, Nerves and Paul Collins’ Beat tunes over the past several years. After just a little time to shop and eat and recover from the long drive, it was time to head over to the Hi- Tone for Ross Johnson’s Like Flies on Sherbert/Alex Chilton tribute with members of ‘70s Memphis punk band the Clitz; plus a surprise guest appearance of the one and only Mssr.  Jeffrey Evans (Gibson Bros., ‘68 Comeback). Every thing, every song sounded fantastic. Chilton would’ve hated it, which Ross (Panther Burns, drummer who played and sang on Like Flies [1979]) was quick to point  out. Next, Orlando slop punk kings Golden Pelicans were “captivating ” as the Gonerfest Eleven program promised, spewing champagne from their mouths all over the stage. So Cow were a pleasant surprise as I’d previously ignored them completely. Rough Galway, Ireland, punk-pop but in the Northern Irish tradition (Protex, Rudi) mixed with, dare I say, Crimpshrine. Ausmuteants were excellent synth punk who get extra  points for blubbering Three 6 Mafia lyrics in their Australian accents  between songs. I knew Radioactivity from Denton, Texas were going to be good because they’re led by Jeff Burke of Marked Men (who I liked) and the Reds (who stank)—a really excellent writer of hooky, buzzsaw punk-pop. Now they just need to gain some weight if they really want to rule. Never been a Grifters (Memphis) fan on record and never caught them  opening for Pavement in da ‘90s, but I did appreciate how they ended  the night with bad/weird vibes. But really more for you Sebadoh fans and completists of all things Chopper Girl-related. I missed the after-party with Trampoline Team (Tulane University) and Overnight Lows (Jackson, Mississippi) because I was tired, but I’m reporting that it did happen and am apologizing to both. 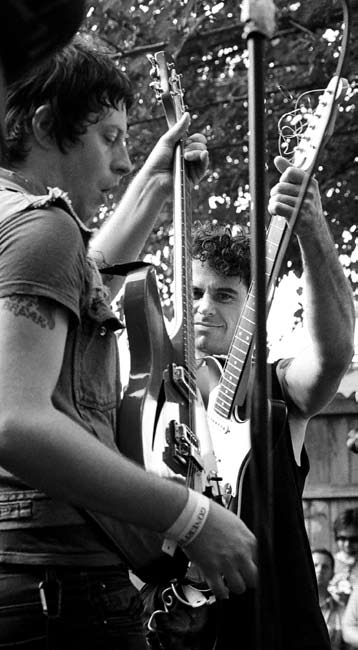 Uptown rulers Die Rotzz haven’t played Gonerfest in a very long time and I think they surprised a lot of people with their intense performance, catchy thug punk workouts, their jokes, and Irma Thomas covers. Same goes for Dutch  Masters who probably dissolved around 2004—a side project bar band with Eric Oblivian, Uptown N.O. nice guy Talbot Adams (Darkest Hours, Black-and-Whites, Jenny Jeans), Scott Rogers (Oxford’s Neckbones and Jenny Jeans, Memphis’ Cool Jerks). Another nice touch to the lineup was the short lived, mid ‘80s Medway-beat/ garage-pop power trio the Len Bright Combo, featuring a former Milkshakes rhythm section (Thee Headcoats’ drummer Bruce Brand!) with old bird Wreckless Eric’s impenetrable accent and songwriting. A really impressive, driving, frenetic set that made me want to seek out their two LPs. The night ended very early in the morning with a packed after-party at the Buccaneer with Giorgio Murderer, Heavy Lids (New Orleans) and Life Stinks (San Francisco). Don’t remember much other than Andy Rotzz wearing a stocking cap with a red fabric ball on top, big rubber dildos floating around the room, and the packed dance floor on the brink of caving in.

Son of Vom, a Vom (not Von) cover band was highly entertaining. Joe  Pestilence (Superdestroyers, the Spits, Clickems) traveled a long way to be a part of it. Vom were the pre-Angry Samoans exploito-punk band from L.A. with rock critic Richard Meltzer on vocals (Von were wicked black metal like none other, from San Francisco). The Stevens, one of several Aussie bands, get the prize for the most authentic  sounding—perfect Oz/New Zealand jangle pop/psych of the ‘80s (like the Chills, the Clean, Doublehappys) by small boys. A real highlight followed: Terry & Louie revisiting their work with fallen brothers the Exploding Hearts (pictured). I’d go as far as to say I liked some of these live versions with Julien and Aaron (Missing Monuments) better than  the original recordings. Their Bram Tchaikovsky/pub rock/tough mod- pop side came through more so than  the pop-punkier feel of their records.  I missed most of Weather Warlock because I wanted to go interview Memphis rap pioneer DJ Zirk. But I got a good dose of Quintron’s latest invention: a weather-reactive analog synth’s hypnotic drone. A 20-minute heavy doom jam followed, with Mr. Q and Chad Booth (Gary Wrong Group, Wizzard Slleeve, Kajun SS) on BC Rich Warlock guitars!

Reportedly all babies and children in attendance hated it.

Nots (Memphis all-girl gyrl band) were fun as usual, lots of screaming. More bad vibes with The Rebel (Ben Wallers of Country  Teasers [UK]), who was sadly not on acid this time but still good/interesting minimal  tiny keyboard+samples+guitar nastiness. ‘70s fanzine rock/proto- punk legends the Gizmos were who

I was excited about. I even made sure to skip a couple bands as band overload was steadily setting in. Most of the original ‘76-77 lineup— Eddie Flowers (Crawlspace), Ted Niemic, Kenne Highland (O. Rex, Afrika Korps), Rich Coffee (Yard Trauma)—who recorded a set of three tasty EPs of teenage snot and sperm on their own Gulcher Records out of Bloomington (Indiana), rocked out like goofy kids and exceeded  expectations with all their first wave hits (“Muff Divin’”, “Amerika First”, “Human Garbage Disposal”, “Kiss of the Rat”, “That’s Cool [I Respect You More]”, “Pumpin’ to Playboy”, “Gizmos World Tour”). Craig Bell of Rocket from the Tombs filled in on bass for extra BOOM!

After-party at the Buccaneer:  Manateees (Memphis), Golden Pelicans again, and the nuts  Lumpy & the Dumpers (Indiana somewhere). Another crowded, drunken mess that I half-remember.Some friends ‘got in trouble’ for blowing a little plastic whistle over and over. Sadly I missed the King Brothers’ (Japan) closing ceremony performance, Sunday back at the gazebo, because C-Boy and I were having spinach and artichoke dip with Terry “Gimme What You Got for a Pork Chop” Turner, better known as Freakmaster. No regrets.