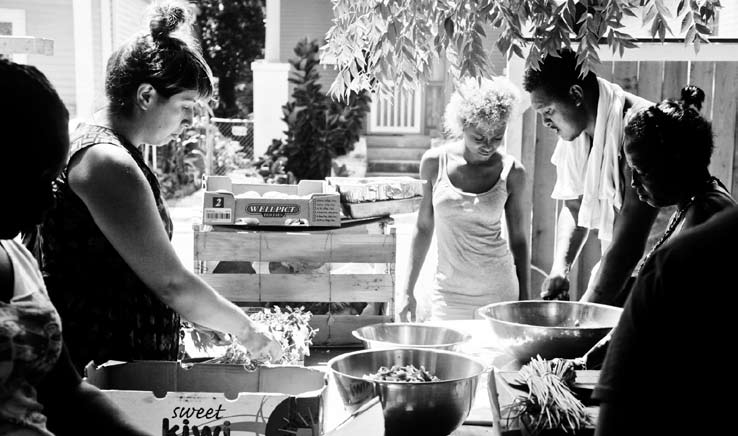 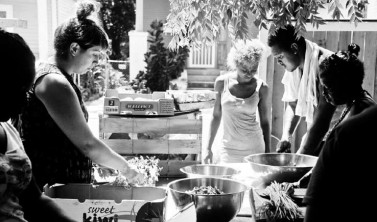 When did Community Kitchen start here in New Orleans and why did you choose to call it something other  than Food Not Bombs?

Nico: New Orleans Community Kitchen started in its current form in January 2012 with a few friends and me cooking in my house and serving a free meal around Central City and the CBD. Our first radical catering events were a march against police brutality and the May Day march in 2012. When inviting folks to get involved organizing and cooking, I gave it the working name “Community Kitchen” just so we could have a generic but neutral name to refer to the project. My hope was that as the project became more collectivized, a new, original name would emerge, but so far we’ve just stuck with the simple name and it works well… In our group, I pushed for us not to call ourselves Food Not Bombs because I was tired of the rampant FNB model that seems to fail nine times out of ten. When I say fail, I mean long-term failure through poor organizing, burnout and reproducing the stereotypical container that is most FNB projects that I have witnessed around America. Don’t get me wrong—there exist great, sustainable FNB projects; New Orleans had one before hurricane Katrina. But I envisioned a project that had no walls until the group created them; and by having an original name, I felt we could create our own vision instead of feeling like we were just another typical FNB. Familiarity, although comforting, isn’t usually pushing the boundaries.

Food should be available to everyone, and I don’t mean a can of corn and a package of baby formula at the neighborhood food bank. Good, nourishing, clean, unprocessed food is a luxurious privilege in our society and we are all raised to believe that the only way to healthy nourishment is wealth, hard work and walking the line. This is a lie…

How many  volunteers help make CK happen every week and about  how many  folks do you serve?

The base group that makes Community Kitchen happen is one produce runner, three cooks and three servers. The produce runner goes out at 9 a.m. and gathers food from a couple grocery stores and a few wholesale produce distributors, all within one mile of each other. Cooking starts at 10 a.m. We found that more than four people in the kitchen slows down the process of planning and making the meal—too many cooks in the kitchen. Serving happens at 3 p.m. and starts in the park next to City Hall and the Main Branch public library. We serve anywhere between 30 to 75 people in the park and then head to a couple other places with whatever food we have left, usually in Central City and in the Warehouse District.

Which populations do you serve  and what is your relationship with those  communities like?

We serve a variety of populations: houseless folks, transients, travelers, punks, hippies, musicians, gamblers, day laborers, unemployed, folks who are struggling to pay the bills, folks who love spending all day in the library, folks who live in the parks and under the bridges… these are a few of the populations I’ve gotten to know while serving. Our relationship with these communities, from my perspective, is not necessarily close or wholly supportive, but nurturing and non-judgmental. We serve many folks who interact with social services and religious charity institutions and I’ve learnedhow abusive these services can be towards the folks that seek help, so by nature of being a non- religious and anti-imperialist institution, Community Kitchen becomes a place where folks from almost any background feel comfortable and loved. I don’t say this because I just idealize it, I say this because we’ve been told this by the folks we serve. You stop and think when someone says to you, “Thank you for treating me like a human.”

Sharing  food is obviously an altruistic gesture, but what are the larger  political implications of what you are doing?

I think we hope the larger political implications of our work are a noticeable shift in the way food is controlled and access is restricted. Food should be available to everyone, and I don’t mean a can of corn and a package of baby formula at the neighborhood food bank. Good, nourishing, clean, unprocessed food is a luxurious privilege in our society and we are all raised to believe that the only way to access the key to healthy nourishment is through wealth, hard work and walking the line. This is a lie, a meme that keeps us controlled and feeling hopeless. Community Kitchen is an attempt to navigate ourselves through this mess we live in. Many of the volunteers and organizers for Community Kitchen are 20 to 30 year- old white transplants with excess leisure time and access to so much privilege, most notably the ability to live outside of the prison industrial complex and easily access cheap housing and food. I don’t know if  our work is necessarily effecting radical change directly, but my place as a privileged white person, like many of the other Community Kitchen folks, gives me the ability to transfer the excess of our industrial food system to those who don’t have easy access to it. It is a kind of  solidarity work; and whereas we all struggle, we can at least struggle together and make this world a little less brutal.

What is the state  of food access in New Orleans?

We are like so many other urban areas in the developed world: the city is completely lopsided in affordable grocery stores with produce, uptown having at least half a dozen and downtown having a lone Save- A-Lot for the entire population. Most folks with access to vehicles drive many miles to Wal-Mart. From what information I’ve gathered, the houseless population that access food through shelters receive a basic menu of beans, rice and cheap meat. At Community Kitchen servings, we hear complaints that the shelters don’t ever serve green salads, fresh vegetables or dishes that have variety or taste, for that matter. Many transient and houseless folks scavenge food in dumpsters, the waste of premature expiration dates and capitalism’s basic condition of (and addiction to) excess. Unfortunately, the managers of supermarkets battle the dumpster divers by dumping bleach on food waste or keeping the lockdown intact with inaccessible trash compactors or cops. Futhermore, clean soil in which to plant seeds for edible gardens is practically non-existent. The recommended solution is to bring in clean soil and create compost; and although access to cheap land is available, it is becoming more difficult to access, as government bureaucracy is tightening. 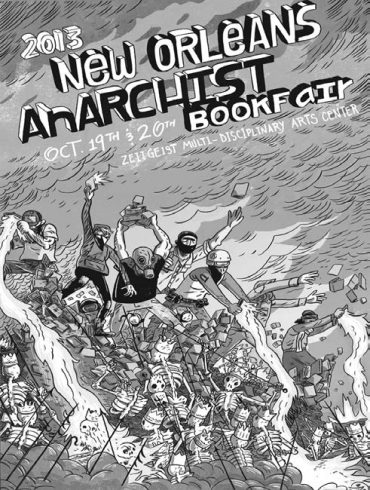 Aside from serving food in Duncan  Square  every Tuesday, you have provided food for various local events over the last couple years. Which events have you supported in this way and why was it important to you to do so?

We have provided food catering support to a number of radical events such as street marches, workshops, conferences and meetings. We have provided meals and snacks for the Crecent City Childcare Collective, Fourth World Movement’s Street Library, 7th Ward Boys and Girls Garden, Anarchist People of Color Conference, Queerspiracy and Endless Gaycation, anarchist studies conference, street medic training and hurricane Isaac relief, as well as planning for future events such as Bike!Bike! 2013 and the Anarchist Bookfair. It is important to provide food catering for social justice groups because we all know how important good food is in the revolution! Having a meal or snacks at an event can be what keeps it intact, especially all-day or multi-day conferences, by fueling the participants and organizers. By offering this service, Community Kitchen helps take some of the burden of food gathering and prep off the event organizers. We do it every week, so we’re good at it! It’s also important to us that we don’t become just a “service” that does all the work. We are entirely volunteer-run and we love getting new people involved in the kitchen. When folks ask us for help making food for an event, we ask that they help find new volunteers and stay connected with us through the whole organizing process. We want to be a part of an event and not just the caterers of it.

Community Kitchen  is not a non- profit, is that right? How do you operate without grants?

We are not a non-profit, and we don’t plan on becoming one. When we serve on the street and people ask who we are [or] what group we’re with, it’s really great to say, “We’re a bunch of neighbors and friends who cook together.” I think we’ve become an institution of sorts in New Orleans, but one that is entirely human-based and based on mutual aid. We budget creatively and, just as we have privileged access to food connections, transportation, housing and the legal system, we also have connections in the non-profit world and receive support from that world to make some of our work easier. We have not yet received any grants, and we would be picky if we were to apply for one, as we don’t want to compromise our political ideals or build unnecessary walls… Right now we survive financially by soliciting as many in-kind donations as possible (food, supplies, etc.). We also hold fundraisers, such as the wildly popular Community Kitchen benefit music shows, as well as an event called the Commie Kitsch Speakeasy, where we serve a themed three-course meal in a special setting and have homemade everything, including drinks, decorations and desserts. I’m constantly amazed at our community of friends and supporters who turn out in great numbers to support the cause. I’m really happy so many folks see this as important work and I think the community support keeps us going as organizers.

For more info on the New Orleans Community Kitchen, check out commiekitsch.org