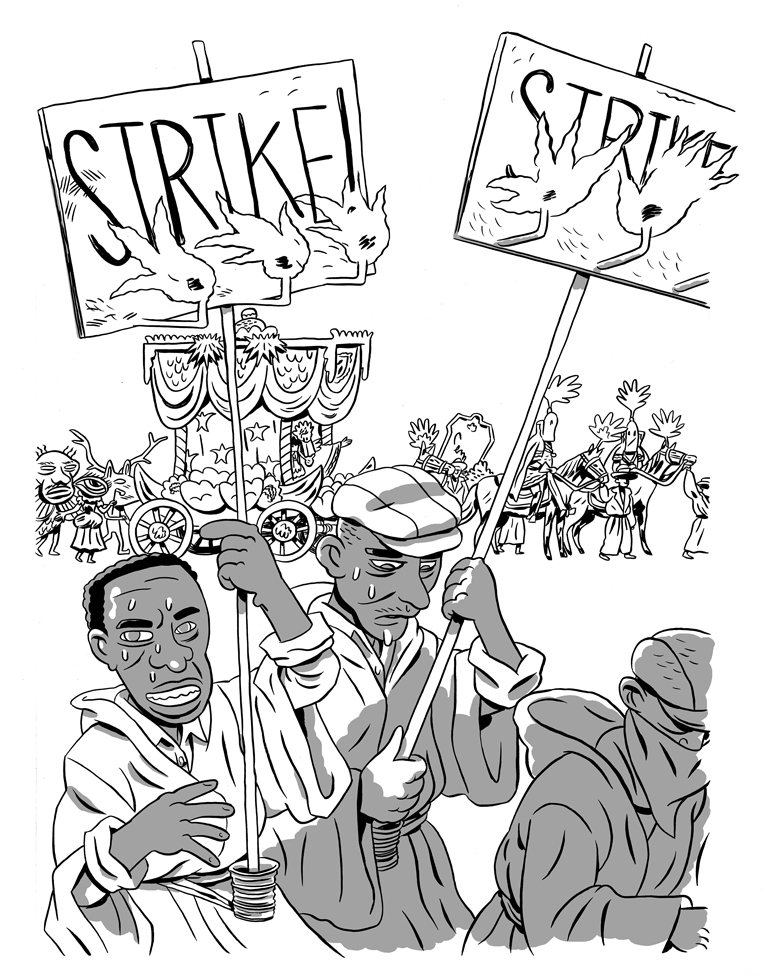 On Lundi Gras evening in 1946, the kings of the Krewes of Comus, Proteus, and Momus met to discuss an urgent matter. The previous night, the flambeau carriers did not show up at the start of the Knights of Momus parade route. They were on strike for higher wages. The richest, most politically powerful men in New Orleans were quite literally left in the dark.

Before safe battery-powered electric lighting and widespread overhead street lights, the dazzling parades of New Orleans’ famed Carnival tradition were lit by flambeaux. At the time of the strike, flambeau carriers—Black men who marched alongside Mardi Gras parade floats while holding aloft iron poles topped with kerosene lanterns—were paid $2 per parade (equivalent today to $25). The average parade route was (and still is) about five miles from start to finish.

A flambeau carrier strike meant that the evening parades could not proceed. The glittering fairies and colorful flowers of Carnival would be eclipsed in darkness. If they forged ahead regardless, there would be no grand, spectacularly lit pageantry for the throngs of residents and tourists—the few parades that did were nearly concealed in darkness.

The Three Kings had a few options: cancel the parades, throw together a last-ditch plan, or, as a last resort, raise wages. The night before, the Krewe of Momus rolled in darkness and was eventually canceled. A citywide cancellation of night parades was not a viable option. That night, The Krewe of Hermes also rolled in near darkness. The panic was not simply over the absence of strong men to carry torches, but Black men. Flambeaux were not just elaborate kerosene lanterns. Black men were flambeaux and flambeaux were Black men.

In one last effort to secure such labor, the Krewe captains issued several calls in the Times-Picayune to Black veterans, newly returned from the fires of World War II to “come forward as volunteers in order that the resumption of the Carnival festivities after a lapse of five years not be marred and that the thousands of visitors and servicemen and women here to enjoy the gaieties not be disappointed.” According to several oral histories taken by historian J. Mark Souther in 2006, veterans recalled their anger. Why would Black veterans, whose families couldn’t even find space to watch the parades, volunteer to dance for white crowds?

In desperation, the Krewe of Proteus hired white scabs to march with small wooden torches after the appeal to Black veterans failed. Though the torches were functional, this was a far cry from the drama of the dancing flambeau carriers. This temporary plan would not do, either. The kings begrudgingly offered a wage increase to $2.50. This was a citywide informal agreement, set by the “carnival cartel,” a term coined by historian Reid Mitchell. The strikers scoffed at $2.50 and refused to march. It was an insult. After scraping through Carnival season with dark streets and white workers, the cartel relented. Five dollars it was, but flambeau carriers did not take up their torches again until the next year.

This is all evidence that flambeau carriers in 1946 understood this was a job. They understood that they were doing this to support their families and make bill payments. They were clear on who was paying them and why. Flambeau carrying is an unequivocal side hustle. Every penny counts, even during Carnival season.

“CREATURES OF SOME HAPPY HELL”

The earliest recorded appearance of flambeaux was in 1857 at the Mistick Krewe of Comus parade. Two floats rolled at night, lit by flambeaux. The first flambeau carriers were enslaved Black men. After Emancipation, Black men continued to bear the gargantuan, cross-like apparatuses. Although dancing was not originally intended as part of the job, flambeau carriers found that dancing with the torches impressed audiences, who would throw pennies into the street as a reward.

Yet some krewes believed those pennies were undeserved. The “old guard” of Comus, Momus, and Proteus were enraged at the flambeau carriers’ hustle. As late as 1970, the leadership of Comus suggested that carriers wear signs around their necks with their float assignments and proposed that the New Orleans Police Department keep the carriers in single file line beside the floats to prohibit the sideshow dancing.

Why would Black veterans, whose families couldn’t even find space to watch the parades, volunteer to dance for white crowds?

Mardi Gras celebrations propped up Jim Crow in ways that went far beyond signs on doors. In the history of New Orleans Carnival celebrations, up until the legal unraveling of racial segregation (and arguably far after), the flambeaux were really the only “sanctioned” and protected way for Black people to cross the metaphysical race line of Mardi Gras. Black families who dared attend parades in the French Quarter or St. Charles Avenue would suddenly find themselves cornered by police dogs. The unofficial Mardi Gras color was white. To the entire world, the fabulous parades of Carnival, synonymous with New Orleans’ Mardi Gras, were enjoyed by whites only.

It was not until 1991 when Councilwoman Dorothy Mae Taylor brought this issue into the public spotlight. Mayor Sidney Barthelemy approved an ordinance mandating racially integrated Krewes. After the passing of the ordinance, the Knights of Momus and Krewes of Comus and Proteus refused to parade. To this day, Momus and Comus only hold private balls.

Also in 1991, a Carnival guidebook referred to flambeau carriers as “strutting boys,” while historian Robert Tallant described “the white-clad Negroes, weary but happy, dancing and strutting under the heavy weights of the old-fashioned standards… making them look like creatures of some happy hell.” White spectators threw coins on the ground for their so-called “creatures”—a reward for dancing with enormous, flaming iron poles.

Despite the memoirs of predominantly white historians, the carriers were neither “boys” nor “happy.” While much journalism over the past five years (and especially since the Glambeaux debacle of 2014) obsesses over the question, “Are flambeaux racist, or a time-honored tradition?”, it still remains that racism and tradition aren’t mutually exclusive terms, especially in New Orleans. Instead, the question should be, “What insight and inspiration can be gained from a story of collective labor action over 70 years ago that brought New Orleans’ white patriarchy to its knees?”

In an interview with Tulane’s WTUL Radio, Jennifer Turner of Community Book Center recounted her memories of flambeau carriers and the strike: “They were carrying their crosses with the kerosene, and it would drip. They’d pay them virtually nothing, but it was a supplement to their income. They were hardworking individuals. That was a hard job. They have a caste system here. Caste and class! …I can’t remember exactly when, but I know this much: the flambeaux carriers went on strike. That was the year they didn’t have any lights for the floats. We all came out to see… not see that. They got paid when they showed they were serious about not parading. They let them go a whole year without any flambeau carriers.” 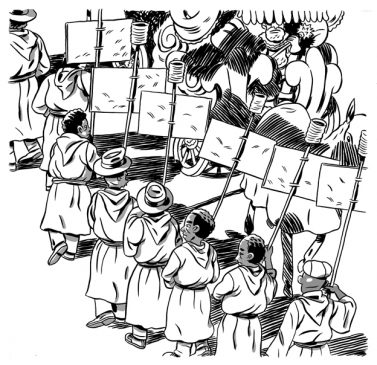 So few people who live and work in New Orleans actually ride atop floats. Those who work ungodly hours day and night in restaurant kitchens preparing New Orleans’ famous cuisine can’t actually afford the food they cook (let alone a market rate apartment). The holders of exclusive tickets bestowed for glamorous balls dance away their one-night affairs, upholding the mutually engendering exchange of appalling sums of money and social capital. The hours of work of artists, security guards, sanitation workers, cooks, servers, and delivery drivers are also part of this exchange.

Working at a Mardi Gras parade isn’t community service. It’s not “patriotic,” as the post-World War II ads would have people believe. It’s not something you do out of the goodness of your own heart to improve the living conditions of vulnerable communities. Being paid for your physical labor in smiles is an embarrassing and exploitive idea. Most of the tasks that don’t include sitting on a float with plumbing, heat, cold booze and snacks are bonafide wage labor.

Let’s look backward down Canal Street to 1946, and give a nod to a tiny minority of courageous souls who realized a strategic advantage and seized it. A humble few can wield some serious power—enough to shut down one of the greatest shows on earth.