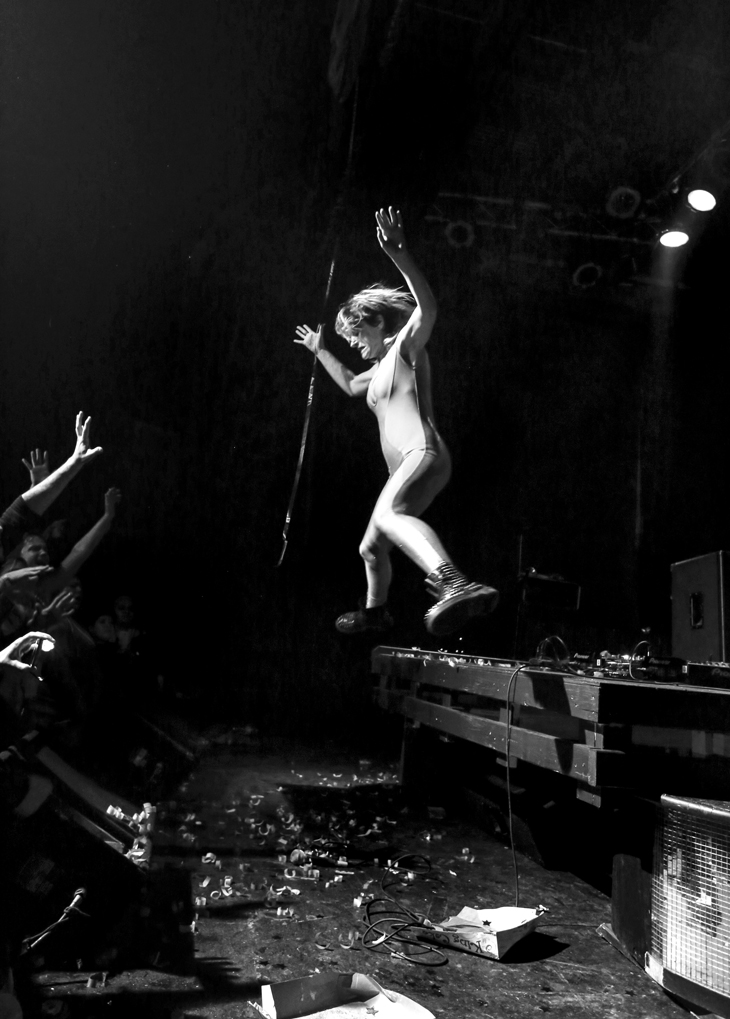 Since 2000, Peaches has been making her own unique brand of bawdy electropop. With joyously unrestrained stage shows replete with sexually explicit choreography and elaborate costumes—think a suit made of boobs with Barbie doll heads for nipples and backup dancers dressed as giant, gaping vaginas—the 50-year-old performance art veteran has earned her reputation as a transgressive cult icon. Not one to shy away from experimentation, the upcoming Peaches show at Music Box Village is slated as a first-and-only performance featuring over 20 New Orleans artists, including Sean Yseult (White Zombie, Star & Dagger), Tif Lamson of Givers, Delish Da Goddess, and dancers led by Chanice Holmes of Dancing Grounds. I caught up with Peaches to talk about Iggy Pop’s car and her upcoming New Orleans performance.

Your Music Box performance has been described to me as a special, one-time only event. How’d you decide to do this show here?
I have a unique relationship with New Orleans. My first show there was in Quintron and Miss Pussycat’s basement, the Spellcaster. And I have a relationship with the One Eyed Jacks people. I’ve been the gong master for the 9th Ward Marching Band after Katrina. I played the Halloween show with Quintron. I showed my movie [Peaches Does Herself] in New Orleans, which I haven’t shown in so many places in America. I just seem to be welcome there and it seems like a perfect fit.

When was that first Spellcaster show?
2001.

Oh, wow. So the early Peaches days.
Really early. I didn’t know what was going on.

Do you remember the show at all?
It was amazing. Ernie [K-Doe’s] wife [Antoinette] was still alive, and she was working the bar. Miss Pussycat was part of this go-go dancing scene and there were a lot of girls there that were just ready to be my backup dancers. It seemed like the Peaches party had started even before I got there. They were just ready and up for it.

All your shows are very performative, but will this upcoming New Orleans show fall in line with the more theatrical performance art you’ve done?
I think so. Usually I don’t have a lot of musicians on stage. I’m going to be working with 20 other musicians and dancers from New Orleans to create my songs in a different context, with different instruments and styles. It’s going to be experimental, for sure. It won’t be your typical Peaches show. I mean, no show of Peaches is typical, but this will definitely be different and amazing. Lots of guests and surprises that I can’t tell you about. I’ve been touring this album [Rub] for two years, so this will be my last show on this tour, my way of sending off the album in another direction.

What do you think are the optimal conditions for a Peaches show?
Just be open. Be ready to be open and have fun. It’s really just as simple as that. 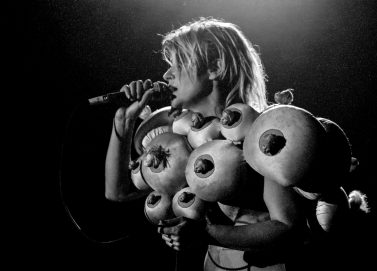 I think so? I’m more familiar with his video work than his sculpture.
Ah, see I’m more familiar with the sculpture. Like that saloon scene where it looks like a Disney walk-through, but it’s people getting screwed up the ass. It’s so messy, but completely thought out. His work is about showing the body in a really dirty but real way, but also a super fantastic, fun way—but also it’s scary and dangerous.

One of your videos reminded me of him.
Which one?

It works. I also wanted to ask you, in terms of pop music, do you think it’s fair to say you’re something of an anomaly?
Sure. I don’t even think I’m pop music. No one’s ever invited me to a pop award show. Pop music to me is monetary, a certain group of people, a big business. If a song is catchy and that’s pop, then great; but in general, being pop music is not really my goal.

I guess when I think pop music I think of a sound. It doesn’t necessarily relate to the commercial viability of the music.
Well, that’s good then. My songs are sing-along-able and stuff.

At this point in your career, you’ve been around for quite a while. Do you feel like you have peers?
I have peers. I have friends. Yes, of course, people that have been around a long time and are still doing their thing and still loving it. I would say Quintron and Miss Pussycat are some of my peers.

What I was thinking is that a lot of artists drop off or burn out, and you seem to have found a way around that.
Yes! I like that. Thank you.

Well, how did you do that?
I just kept going, even if people told me I was a one-trick pony or I was just weird. I would make one album and tour for two years, then do it again. I used to just be thought of as weird and not super respected, but people liked it and thought it was fun. Now, people think I’m important. So I guess if you stay around long enough, you’re “important.”

You think that’s the key?
No. I knew that already. I knew I was important. It just takes some people longer to figure it out.

So after this special engagement in New Orleans, coming off of this two-year tour, what’s next?
I don’t know. Got any suggestions?

I don’t know. I think you’ll figure it out.
Okay. Thanks. Good.

I mean, you have a lot more experience than me. I don’t think I can offer much advice.
Yeah, I’m sure I’ll figure it out. 2020 will by my 20th anniversary. I started to build my archive, so maybe I’ll do something to celebrate that. Not sure what that will look like, but we’ll see… Maybe something like an exhibition or a living lecture performance. Maybe something that can travel but it’s not every night, freaking out all the time.

How much longer do you want to do that for?
I don’t know. Look at Iggy Pop. He’s making me keep do it.

Have you ever talked to him about this?
I think that’s just his thing. That’s what he does.

He’s 70 now. I read a recent interview where he talked about buying a dad car.
He used to have two Rolls Royces.

We can talk more if you want.
Nah. You can make up a bunch of stuff, but just make it good! You’re good at that, right?