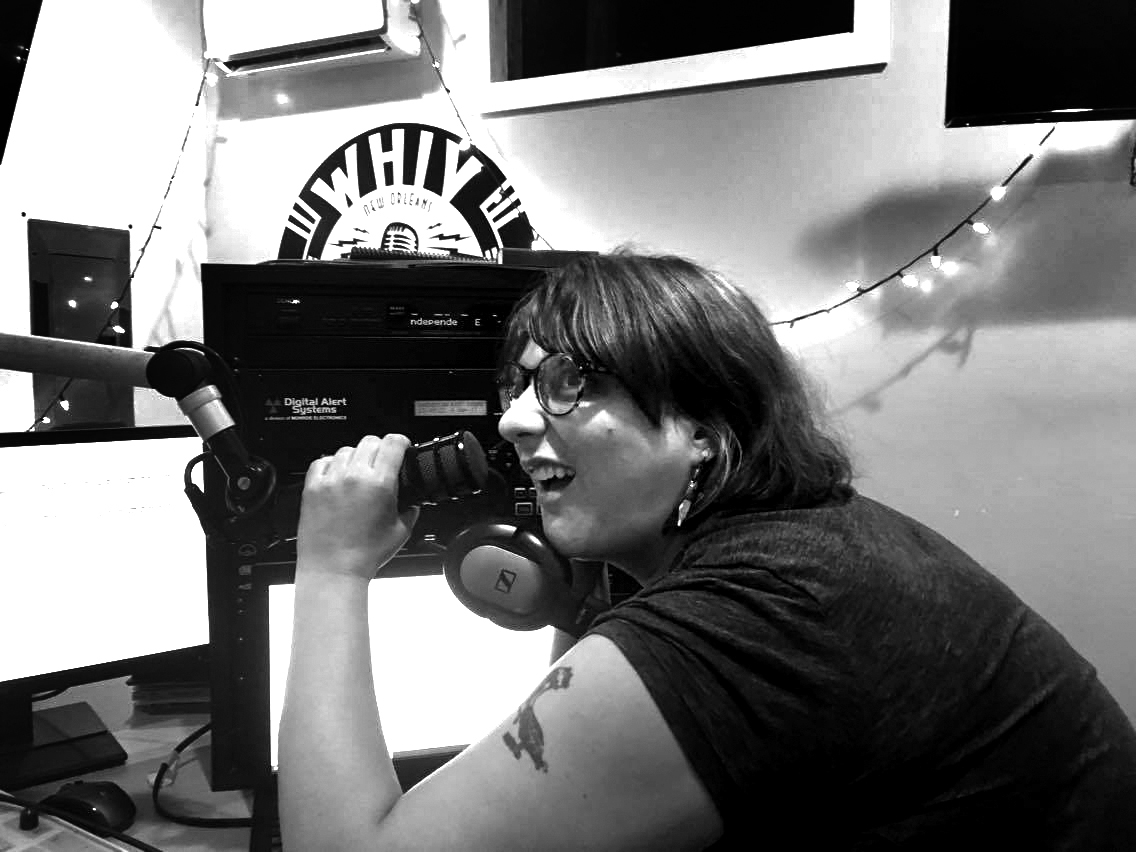 For the September 6th episode of ANTIGRAVITY RADIO (hosted by Ben Miotke and Brandon Lattimore), we were pleased to feature Sarah Mason, member of local band Black Abba and owner/operator of the Space Taker Sounds (formerly Pelican Pow Wow) record label. Sarah’s playlist was an awesome mix of artists she works with, like Nag and Buck Biloxi, as well as influences like Can and E.S.G. Here’s a quick “best of” from the show.

So, both Can and E.S.G. are influences of yours?
Yeah! Can really blew my mind the first time I heard [them]. And then E.S.G.—I grew up in New York City and all those girls had New York accents, and they were talking about throwing flowers in a garbage chute and kicking people with their J.C. Penney boots. What’s not to like about that? How could you not get riled up?

Why the change from Pelican Pow Wow to Space Taker Sounds?
It was kind of a gradual decision. At the second Pelican Pow Wow Pow Wow that I did, I got a little bit of flak on Facebook. I’d been running the label for two years and finally I put up enough signs around town that somebody noticed and said something about it like, “Hey. Don’t you think this is appropriative? What are you doing?” And, at the time, I kind of took an angry approach and was like “You know. Your whole discussion of appropriativeness is based on this neoliberal ideology of Western values and it’s intrinsically capitalistic and here are all the reasons I disagree with you.” And then I thought about it… and I thought about it some more… When you are faced with people actively appropriating Mardi Gras Indian culture and second line culture in New Orleans who are transplants—which I am—it’s a little bit grotesque, like, “Oh wait! I am definitely on the wrong side of this argument and I need to recognize what I’ve done wrong and I still want to put out records.” So I decided to change the name because I couldn’t really defend the “Pelican Pow Wow” thing anymore… [But] I have a big tattoo of it on my arm! I haven’t decided what to do about that. I think I’m just gonna keep it because it’s a part of my history, but it’s a little embarrassing to walk around with it now and then… that’s another thing, I run a record label and I want to represent the bands I’m putting out. I feel really passionately about punk music and having a conversation about whether or not the name of the label is right or wrong is just not what this is about. And if people have a problem with it and it’s a realistic and valid problem then I’d rather change it and start fresh.
Did the roster have anything to say about the name change? Like, were they all for it? And how did that stem relationships with new artists?
I think the artists that were most affected were the two that came out on Space Taker that had agreed to put out records on Pelican Pow Wow, which is this sort of established label. And then I was like “Oh, hey. By the way, it’s coming out on this label nobody’s ever heard of. Sorry.” But they were very good about it. Nobody was upset. Nobody was offended. I think the older roster understood why I was doing it and nobody’s really given me a hard time about it.

“Space Taker Sounds.” Would you mind elaborating on the name?
Space Taker Sounds: sounds that take up space. So it’s a physical media company, right? Like all these songs are going to be available on Bandcamp and Spotify but the reason I am doing a record label is because I value the physical medium of a record… The world is on the brink of utter meltdown, but you hear stories about people having a dance party, listening to records that came out in Algeria in the ‘60s or French yé-yé. And the fact that those objects can exist outside of any of the horrible things that happen in the world is kind of special. So while digital media really preserves a lot of stuff, I think the idea of having records that take up space and sound preserved in that way is pretty valuable and important.

So, running a punk label releasing physical media in 2017: seems like a bold move.
By “bold” do you mean “fiscally stupid?”

People are like “Punk? I already know about that.” Like, “Records? I don’t collect those.”
Yes. I get both of those assertions but there’s lots of new music still happening. People are still in bands. People are still making music. They’re still creating things and it still deserves attention. And, if you go to certain festivals, it’s all bands that were popular 30 years ago, 20 years ago. Even at good independent festivals a lot of the times, a lot of the bands headlining are bands that are older, have been around, and maybe done reunion stuff. I don’t think there’s anything wrong with that but I think it’s really important to sort of focus on what’s happening now and what new creative things are going on. You know, what the youth are doing.

ANTIGRAVITY RADIO airs 10 p.m. to midnight every Wednesday on WHIV-LP 102.3 FM in New Orleans, and streaming at whivfm.org