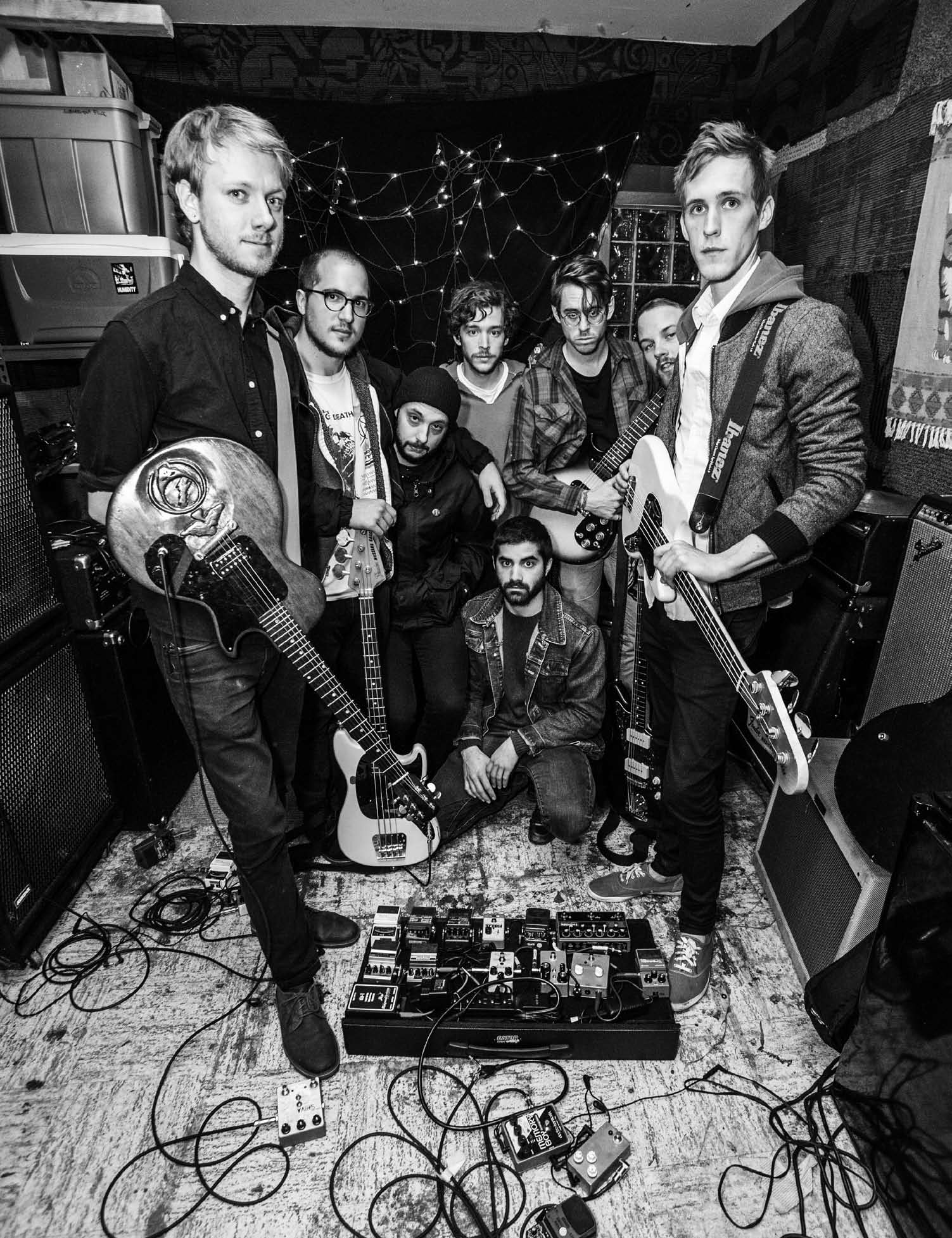 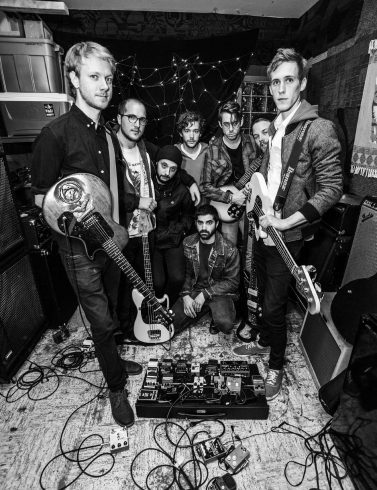 THIS BUS RUNS ON ICED COFFEE tour? What inspired that name?

JDH: Some of us like iced coffee. Jordan Odom: Jasper drinks enough iced coffee for all the people that don’t.

Where did you go?

Natural Blonde, What was Heat Dust’s best performance on tour?

JK: Definitely Tallahassee because… well, we named one of the riffs that comes at the end of their songs the “meat-riff” because there were these meat-bros that were really into it. When they hit the meat-riff, the jock meat-bros went crazy and started moshing super hard, but there was only two of them so everyone else was like “what?” It was definitely a positive thing.

JK: I mean like metal heads. Clayton Hunt: Influenced by the metal genre.

JK: I saw those motherfuckers coming back from the store with some snacks. Slim Jims and shit.

JO: I think that was the best performance overall though. There was so much energy. I mean, I was feeling it.

CH: Did they have a good show?

JDH: The San Antonio show was pretty exclusive. [laughter] There was only one other person in the crowd besides us and we were all drunk and dancing around. He took pictures with all the band members.

CS: They sounded great every night, but even the nights when there was no one there like Birmingham and San Antonio, Natural Blonde sounded amazing just for us.

JK: We try to play better when there’s no one there. 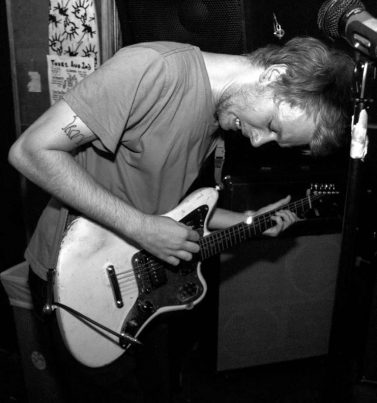 JDH: In Atlanta, they all sounded especially good which was really cool because there were like a bunch of punks, but they were vibing out really hard to it.

JK: I mean it was like a metal show.

JDH: Yeah. There were a lot of heavy bands on that bill.

JO: Some of the heaviest shit I have ever heard.

Natural Blonde, what do you think inspires Heat Dust? Musically, spiritually… whatever.

JO: From my perspective, I’d say each other.

JK: —and they also consume each other.

JO: There’s this one song that Jasper and Clayton start with no tempo, so they just look at each other to find it and you can tell that they’re all in it together.

Heat Dust, what would you say inspires Natural Blonde?

JDH: I do know that Jesse’s spirit animal is Kate Bush.

Tell me about the portable coffee machine you found on tour.

JO: Well, the coffee machine we found blew out the fuses in the van so we couldn’t charge anything, so we pull up to the gas station and all these honky-tonk motherfuckers get Subway…

JK: I didn’t get Subway!

CH: He almost got Subway but he didn’t because he didn’t like the guy’s hair.

JO: Anyways, I was digging around the gas station for pliers, bought some, and we fixed it!

JO: Yeah, I had to buy a $9 pair of pliers because I thought I left my multitool at home. I found my multitool in my guitar case later and wanted to die.

JDH: I think a really nice moment was on the way to Atlanta, we stopped at the Cheaha State Park in Alabama.

CH: That was the literal and figurative high point of the trip. That was the highest point in Alabama, I think. We chilled on top of the mountain.

JO: That was definitely one of my favorite parts. Clayton and I went up there by ourselves at first and just sat there. It was so nice. We had been in a van with each other and rock’n’roll music and all this stuff; and to just go sit up there with literally no sound—I was so happy.

Is there any music that you can’t listen to for a while after tour?

JO: We had a pretty good understanding throughout the tour.

CS: It was never too blown out where everyone’s going crazy.

JO: I think it kind of did the opposite and inspired me to listen to more metal and black metal because I never really listen to it.

CS: Yeah, there was a little bit of every type—never too much.

JO: The only issue was that there wasn’t enough room to dance.

JK: Maybe this is an inappropriate time to bring this up, but we did award each other some awards. The kingship awards. 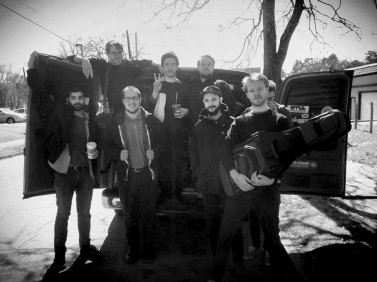 Okay… Let’s go over the rankings.

JDH: So every person has a king, a medal, and a ribbon.

CH: Chris is the King of the Iron Cobra with the Weed Medal and Chill Ribbon. Sean is Joke King with iPod Medal and Best Dressed Ribbon. Jasper is Dad King with Snack Ribbon and Van Lord Medal.

JDH: Well it is my name.

CH: Jordan is Stage King with Cutting In Line Medal…

JO: That’s so fucked up.

CH: But followed by a Kindness Ribbon. JO: I mean I did cut a huge line the other day.

CH: Matt Cronin is Smoke King with a Morning Chiller Medal and a Coffee Ribbon. Clayton (me) is Centaur King…

JO: Seriously, when he’s playing he looks exactly like a centaur.

CH: With a Booking Medal and a Jingle Ribbon.

JK: Someone will say something then he’ll sing it back and everybody starts harmonizing. It’s a really good thing.

CH: Okay, we have two more. Winston is the Party Enhancement King with a Tummy Courage Medal—

JO: He was sick the first half—

CH: —And a Documentarian Ribbon because he had the good Instagram. And finally, Jesse is the Energy King with Health and Fitness Medal with Skateboard Ribbon.

The Scariest moment on tour?

JK: The scariest moment on tour was Winston almost dying because his stomach was freaking out. He was sweating and shaking. I think he had a fever.

CH: I think that was the first night? JO: Yeah, it was the very first night of tour. About 45 minutes before we started playing, I looked over and he was sitting at a table shaking. I asked him if he was alright and he was just like “nooo.”

JK: But that was fine because they had free arcade-style Mortal Kombat and we were killing it. I figured out Liu Kang ’s secret move and was just nailing it.

JO: But yeah… that’s why Winston got Tummy Courage, because he was sick the first leg of the tour.

CH: And because he ate junk. Like the next day he ate a hot dog from the gas station.

JK: Winston looks like a very healthy man, but he eats garbage.

JK: I just found out there’s an acronym for that; it’s called S.A.D. for “Standard American Diet”.

CS: I go for like a Larabar and a Slim Jim.

JO: I only eat healthy shit if it’s deep fried. 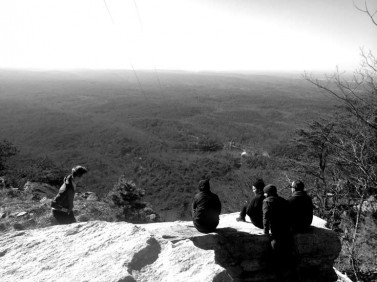 JDH: Winston flew too close to the sun. I would have to say that my scariest moment because I don’t really care about Winston, was when we were on the mountain. I’m really scared of heights and faced it. I looked over the edge and stayed there for a while.

JO: Clayton and I watched the first episode of House of Cards and that was pretty scary. We were in the van plugged in with a headphone splitter and the van was kind of quiet. Then Clayton and I started screaming.

JD: Well they have a 7” coming out with two new songs—slow burners kind of… groove jams.

JO: Who recorded it?

When’s the ETA on that?

JO: I would say in the next 26 years. JDH: The mix should be done this week.

JO: In the next two months ideally. Thats the ideal.

JK: When’s the next time Mercury’s in retrograde?

JK: Is it really? Oh my god that makes so much sense now! [laughs]

CH: The most appropriate reaction to astrology. [laughs] Oh my god that’s so applicable to me right now. [laughter]

JO: They’re about to start working on a new full length that I am super stoked to hear.

JK: Their new songs are the bomb. JO: They are so good and some of them are from the new demo they just released; they’re gonna be on the full length, right?

JK: It’s a demonstration or is it like a demolition?

JO: When I first looked at it I thought they misspelled Devo and that they do a Devo cover on it.

CH: What are those little monkeys that  hang out in the Mangroves, you know, the saltwater swamps? That’s their target demographic: salt swamp monkeys.

JK: There was that one hippie girl really feeling us in Tallahassee.

CH: And all the Lafayette hippies loved y’all. 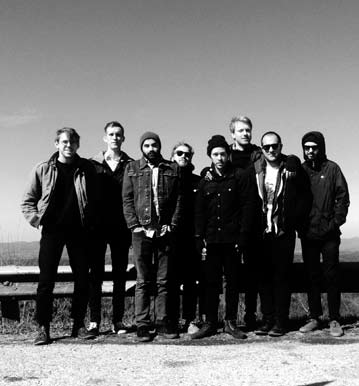 CS: I would say people that do yoga and listen to My Bloody Valentine.

JO: People that do yoga though not yogalates.

JK: People who wish that Phish put out a My Bloody Valentine cover record.

JDH: I can’t say I would listen to that.

Whoa, I think I might fit into your demographic. Natural Blonde, who falls into the Heat Dust demographic?

JO: I can answer that. Dudes that spent  a year trying to find themselves and growing their hair out to their knees and then at the beginning of the year they shave their heads and say “fuck it.”

JO: Dudes in a broad term. Any individual that rebelled for a year, grew their hair out and then was like “this is silly.”

JK: I think also anyone that skateboards would like Heat Dust. Unless you’re like a YoFresh skateboarder.

JDH: That answer makes a whole lot of sense because when we first got together it was skate video music.

JK: If you skateboard and you watch skate videos from the ‘90s and then you hear Heat Dust you’re instantly like “Duuude, this reminds me of that Marc Johnson part from the 411 video.”

CH: Would you say we’re venturing away from the Dinosaur Jr. thing?

JK: There was actually someone at one of the shows who said “Man, you guys used to sound like Dinosaur Jr. What happened to y’all?” [laughter]

Heat Dust, what are some  “recommend if you like” bands for Natural Blonde?

JDH: Then y’all have that post-acid house who dat.

Natural Blonde,  are there any other  “Recommend if you like” bands for Heat Dust besides Dinosaur Jr.?

JK: I would say Gang of Four and My Disco.

JO: Also there’s some True Widow-ish stuff in there, but it’s cool because it’s faster.

Do you think you’ll tour together again?

JO: Maybe some of us have to grow up before.

JD: It should be noted that some of the people in the two bands have been friends a lot longer than we’ve lived in New Orleans. That’s why touring together makes so much sense.

CH: It’s kind of like a warm blanket… like taking a bubbling milk bath with Bart Simpson.

JO: You know the feeling when it’s really nice outside and you go to the park then you realize you have work in a few hours? It’s the exact opposite of that feeling.

Natural Blonde is opening for Typhoon and Angel Olsen at One Eyed Jacks on March 15th. Heat Dust’s next show is TBD. For more info check out naturalblondemusic.bandcamp.com and heatdust.bandcamp.com