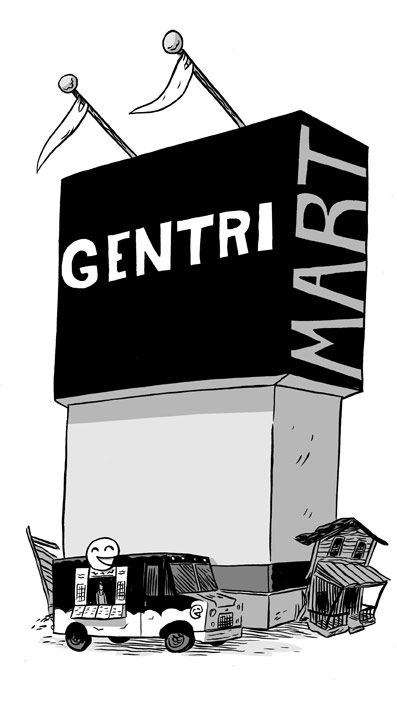 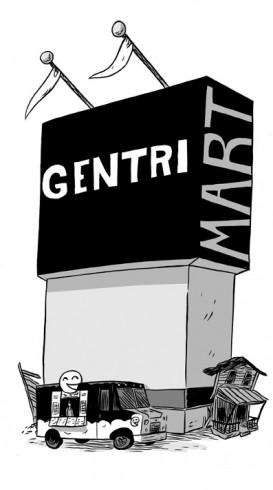 Lately there’s been a bunch of hype about reforming and rewriting New Orleans’ laws regulating food trucks. In February, City Council President Stacy Head twice proposed major deregulatory changes to the city’s ordinances, while across social media creeps a hydra-like ivy of overlapping petitions and events, all advocating a loosening of local laws. Where is all this pressure for food truck deregulation originating, and what drives it? Why should anyone care?

Let’s start at the local level: “Neighborland is pleased to introduce The New Orleans Food Truck Coalition, our city’s freshly-minted food truck and mobile vending advocate. Over the past couple of weeks, we’ve helped this diverse and open group of mobile vendors, customers, and community members organize themselves.”

Neighborland is a post-Katrina lobbying business that provides its services to commercial developers (for instance) who want the appearance of community support for their efforts to change neighborhood zoning laws. They’re young, new-to-town know-it-all entrepreneurs, thick strands in a dense knot of post-Katrina hipster-capitalist and “urbanist” reformers who masquerade as grassroots, claiming to channel the voice of the community on behalf of whatever venture they’re promoting.

One of the New Orleans Food Truck Coalition’s founders and most outspoken members is Alex del Castillo, who in an online profile described himself as “talented enough to believe I can help turn some of the worst aspects of NOLA around.” Interviewed last year by NOLA Defender, del Castillo said, “It’s embarrassing to hear people brag about the food truck scenes in place like Austin and Portland, while New Orleans is still a hostile environment.” He made a similar complaint in an article at NOLA.com: “San Francisco has a thriving food truck scene… we have nothing.”

What about those New Orleanians who, since time immemorial, have shown up in trucks towing barbecue grills to sell food at second lines and outside brass band venues? Are those people “nothing?”  I think some of them serve great food, and they seem to have survived for years under the current food truck laws. But then, maybe those barbecue men aren’t the right kind of food trucks, or perhaps not the right kind of food truck operators.

These food trucks provide a way for high-tech newcomers to avoid having to deal with or even speak to New Orleanians; they’re another layer of twee West Coast culture superimposed atop what’s left of our city, to make it more comfortable for well-off “young creatives.” Just as lower-middle-class tourist visitors to New Orleans line up around Canal Street for the reassuring familiarity of IHOP or McDonalds, our city’s status-conscious upper-class arrivistes can now line up for reassuringly artisanal quinoa claptrap served by reassuringly privileged people with reassuringly kewl tattoos.

With food trucks, anywhere can become a Yelp-worthy White Zone within minutes. Blitzkrieg cultural imperialism allows previously under-Instagrammed areas of our city to fulfill their potential as playgrounds for the rich without the headaches of investment or community engagement. Never mind having a Starbucks on every corner—when your favorite high-concept boutique eateries can chase you around on wheels, you can go absolutely anywhere and still get the same $12 bacon and wheatgrass smoothie. 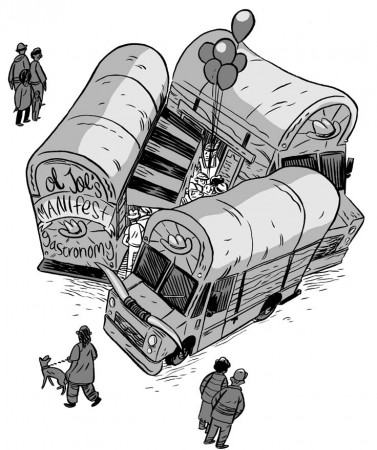 Food trucks make it possible to have pop-up events in poor neighborhoods without benefiting or even interacting with the neighborhood. See for instance the recent “Night Market,” which descended, unheralded and uninvited, upon a less gentrified stretch of St. Claude Avenue. Neighborland and the new, white-controlled St. Claude Main Street organization (funded by “a collaboration of 13 leading national and regional foundations and six of the nation’s largest banks”) seized a grassy lot, strung up lights, established bike valet parking, and then in came the food trucks. What fun! Of course, the food trucks left behind their trash in the lot where the “Night Market” took place… but who cares, right? Poor people are used to trash.

Food trucks are progress. They aren’t restaurants, they’re better. Just as stylish 20-somethings who don’t smile or make eye contact are replacing outdated old Yats and working-class black folks in the Upper Ninth Ward, food trucks are coming to replace our obsolete brick-and-mortar bistros. Sitting down while eating is so old-person, so 20th century. Those quaint notions of hospitality—our city’s traditions of service and warmth, in which guests at a restaurant linger, laugh, drink and talk in an atmosphere of coziness—all of that is outmoded. It takes too long and creates an inefficient, unprofitable sense of place and belonging. Everything must be compact, portable, modular, atomized. Food trucks are Youtube clips on an iPhone, while a restaurant is a jazz performance on Frenchmen…. and I think we all know which of those is on the upswing.

Lizzy Caston came here in 2009 from Portland, Oregon, where she’d been a lead advocate for Portland’s mobile food vendors. Upon arrival, she founded the New Orleans Food Truck Coalition’s sponsoring website, nolafoodtrucks.com. In an interview with the site Eater about reforming New Orleans’ food truck laws, she cuts to the creamy capitalist center of the sundae: “The ordinances just need to change. But here’s the thing you have to understand. Food? That’s like the cherry. Food trucks are really about economic development and urban vibrancy.”

Vibrancy—big buzzword within hipster capitalism. Hipster capitalism eternally seeks to co-opt or imitate youth culture as a means to get young people more excited about commerce, gussying up the worship of Mammon for generation whatever. Flash mobs become “pop-up” markets. Potlucks become “speakeasies” centered around the purchase of food and drink. DIY becomes Kickstarter… all must be commodified.

Beyond using the trappings and signifiers of subculture—e.g. graffiti as décor—hipster capitalism also brands itself as underdog or revolutionary, employing the language and techniques of social justice movements. New Orleans food truck advocates, like any hipster-capitalist undertaking, aggressively seek to enlist you in their urgent, righteous struggle. Arise, ye Facebookers, and sign this internet petition! For freedom! For liberty! For justice! For food trucks!

On the subject of justice, let’s get to know perhaps the biggest power behind New Orleans food truck advocacy, and one of the most frequent partners of the New Orleans Food Truck Coalition: the so-called Institute for Justice.

The Institute for Justice was begun with seed money from the infamous Koch brothers, who continue to fund it, along with the Walton siblings who control Wal-Mart. It’s a coalition of lawyers and PR professionals providing free legal advice and representation for conservative legal causes all over the country, “both in the courts of law and in the court of public opinion.” Once best-known for their attacks on affirmative action (which they call “reverse discrimination”), the Institute has more recently become prominent as high-profile litigators in favor of “school choice,” aka vouchers and charter schools. They’ve got multiple tentacles wrapped around Louisiana: the Institute’s founder became president of the “national school choice leader” Alliance for School Choice, which a few months ago filed suit “to intervene in the recent lawsuits challenging the newly-expanded statewide Louisiana school voucher program.”  Yes, how dare anyone challenge Bobby Jindal’s giveaway of taxpayer education funds to fringe religious freaks!

The Institute for Justice is very hot to strike down our laws governing food trucks. To that end, the Institute came to New Orleans in July 2012 to hold “Let the Food Trucks Roll,” a food truck advocacy “symposium and rally” in conjunction with (among others) the New Orleans Food Truck Coalition, Neighborland and the Southern Food and Beverage Museum.

“Keep Food Legal” and the Southern Food and Beverage Museum

I never gave a fuck about the Southern Food and Beverage Museum one way or another, but come to find out its founder, Liz Williams, serves on the board of the anti-regulatory lobbying group Keep Food Legal, another major far-right force for food truck advocacy. At the museum’s 2012 Food and Law Legal Education Seminar (not to be confused with the symposium six weeks earlier), a long lineup of out-of-town speakers again addressed the need to tear down our city’s food truck laws. The lineup included Keep Food Legal executive director Baylen Linnekin, a Rush-Limbaugh-like figure who tries to gain publicity by (for instance) encouraging the eating of shark-fin soup.

Looking at the board and staff of the Keep Food Legal group, the major thread tying most of them together is Reason Magazine, the most frequent publisher of Linnekin and other KFL members’ screeds against governmental food-safety regulations. Nick Gillespie, the editor of  Reason, sits on Keep Food Legal’s board. Reason is the mouthpiece of another far-right think-tank, the Milton Friedman-endorsed Reason Foundation, whose particular mania is privatization: the corporate, for-profit takeover of services once provided by government. Of course, Reason is Koch-funded as well and even has one of the Koch brothers as a trustee.

Although Keep Food Legal attempts to put a more fun face on their lobbying efforts than the climate-change-denying wingnuttery of the Reason Foundation, its initiatives include “Opt Out of School Lunch,” which advocates that school lunch programs be discontinued—”Stop fighting for the USDA and the federal government to provide better food,” their website says. 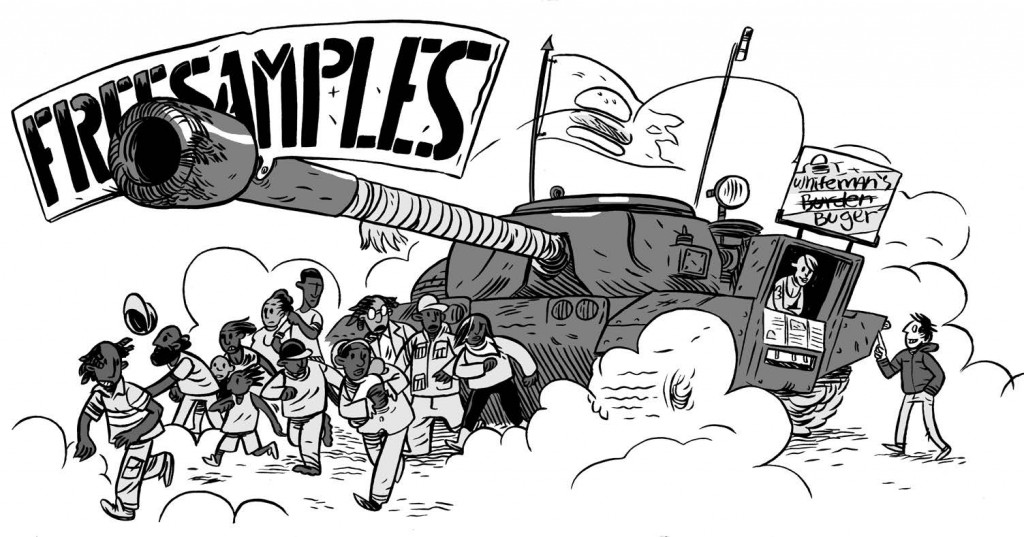 Keep Food Legal, Reason Foundation, The Institute for Justice: these are the Koch-funded anti-regulatory madmen that the New Orleans Food Truck Coalition is in bed with: rich dudes who want to shut down school lunch programs, wingnuts tied to the Cato Institute and ALEC. In fact, at that 2012 Beverage Museum seminar, Linnekin’s presentation not only criticized the “discriminatory regulations” food trucks face but, ALEC-like, provided “a framework within which to consider model food truck regulations.” These are the people who want to rewrite New Orleans’ laws, and this is where the momentum to do so originates.

Why Do the Mega-Corporations Care?

Cutsie-poo gourmet food trucks like those seen on the NOFTC website aren’t run by big corporations. Most aren’t even real businesses, just a trendy, expensive hobby. Why should rewriting our food truck laws matter to the mega-corporations and right-wing billionaires who fund these lobbying groups? What’s in it for the one percent?

An August 2012 article in AdWeek lays it out. Subtitled “How a hot local trend became a marketing vehicle for national chains,” Greg Beato’s piece announces big restaurant chains— including Sizzler, Taco Bell, Chick Fil-A and Jack in the Box—have begun rolling out their own food trucks.

At Sizzler, they’re talking about making a food truck part of the plan for any new franchisee. According to Sizzler’s head of Non-Traditional Business Development, “We would have a plan put together showing exactly what you can do with a truck… We’d have a team that would go out to help the new owner get up to speed, just like you’d do with a restaurant.”

Los Angeles was the birthplace of food truck regulation reform and is where most of these new corporate food trucks have begun operation. As with food truck regulation reform, however, SoCal’s only the starting point for a big, nationwide push. This is the deregulated corporate future: hundreds of chain-restaurant junk food trucks peddling toxic, mass-advertised garbage wherever a crowd gathers. Who could compete with that? In San Francisco last year there were already legislative efforts to allow food trucks to park on school campuses. What a deliciously profitable way to let kids “opt out of school lunch!”

This type of shit is the aim and end-game of the food truck movement, and this will be the result of reforming New Orleans’ food truck laws, regardless of our freshly-minted local food truck hobbyists’ specific political awarenesses or motivations. What NOFTC and their far-right backers are pushing is bad for New Orleans—and anyone who tells you different is just trying to sell you something.