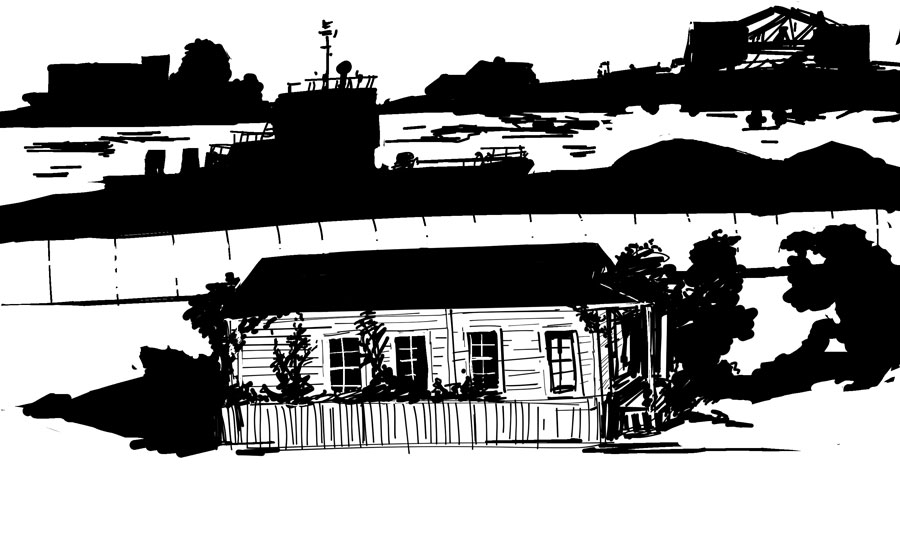 In the early evening of March 30, residents of the Ninth Ward trickled into the St. Mary of the Angels Church, greeting each other warmly as they slid into the pews. They came for the Army Corps of Engineers’ public hearing on the replacement of the Industrial Canal lock, an initial step in the congressionally-mandated “community mitigation plan” required of the Corps before any construction can begin. As friends and neighbors talked and laughed, they gave little indication that they were preparing for battle. But no sooner had Ricky Boyett, the public affairs chief of the Corps’ New Orleans District, stepped up to the podium than the geniality of the atmosphere quickly dissipated. In spite of Boyett’s initial attempts to win over the crowd with humor, the audience wasn’t laughing. As the meeting wore on, one thing became increasingly clear: If the Corps wanted to move forward on the project, they had better be prepared for a fight.

The Industrial Canal sits at a critical juncture between Lake Pontchartrain, the Mississippi River, and the Gulf Intracoastal Waterway, a system of inland waterways stretching from Florida to Texas, built to accommodate large transport barges which fared poorly in open water. The current Industrial Canal lock was built in 1923, and the Corps has been advocating for its replacement since shortly after the completion of the Gulf Intracoastal Waterway in 1949. The Corps’ proposal is to replace the existing lock with a shallow draft lock—900 feet long, 100 feet wide, and 22 feet deep—located on the canal between Tonti Street and Johnson Street. The project would require $953 million (courtesy of the federal Inland Waterways Trust Fund) and 13 years of serious construction, which means dredging the river, substantial noise and air pollution, diverting all St. Claude traffic to a temporary bridge, and possible short-term relocation of residential properties. While the Corps has recognized that the project would undeniably have a profound impact on the lives of Ninth Ward residents on both sides of the bridge, they hoped to convey at the public hearing that the economic benefits would more than make up for the costs.

However, the neighbors and community members were gathered at St. Mary’s to register their opposition, not to hear a cost-benefit analysis. Though the Corps came in with a plan to spend the first half of the hearing presenting the details of the project and devote the second half to community response, the community response proved difficult to contain. When the Corps’ spokesman insisted that dredging would be non-intrusive and any relocation of homes would be only temporary, waves of derisive laughter rippled through the audience. When Boyett spoke of the potential economic benefits, he was interrupted by a woman whose fear was that the Army Corps was not telling the whole story of how the project would impact the neighborhood, and would only reveal their larger plans once construction was underway. “I don’t want to be nickel and dimed—I want to know it all in one piece,” she said, followed by a murmur of agreement from other audience members. The most recurring interjection from Ninth Ward residents concerned how this project would impact flood protection. Boyett assured residents that any previous design failures in the floodgates had been solved in the new superior surge barrier, and this project wouldn’t pose a threat to flood protection infrastructure. This statement, however, reassured no one, as evidenced with a cry from the back of the room which was followed by hearty applause. “After everything that’s happened, why should we trust you?”

The losses of Katrina are still a part of daily reality in the Ninth Ward. And while plenty of other parties may have contributed to the magnitude of the disaster, the Army Corps of Engineers is widely-believed to be responsible for design flaws which led to the breaching of the levees. The New Orleans District of the Corps, the largest in the nation, has long held more resources and assets than any other district. But while flood protection has officially been the responsibility of the Corps since 1965, the New Orleans District has been willing to sacrifice a superior flood protection system in order to cut costs. According to a well-publicized 2015 report in the Water Policy Journal, much of the thinking behind the Corps’ pre-Katrina flood protection design was oriented around the best “cost-benefit ratio.” At times, between the most effective and least expensive option, the Corps would recommend the latter, leaving some floodwalls almost half the height needed to protect the city from higher category storms and others structurally unsound.

The failures of the Corps have not been forgotten by New Orleanians. As Holy Cross resident and community activist Vanessa Gueringer puts it, “the Corps is at the top of the list for destroying us, for making us fight so hard for the community we love. There are families who lost their lives, families who are in the Diaspora and will never come back. The Corps has continuously caused misery in this community.” Gueringer has been working on behalf of her neighborhood for more than a decade, as a member of ACORN in the years following the storm, and more recently as the Vice President and Chair of the Lower Ninth Ward chapter of A Community Voice. Gueringer has advocated for schools, street repairs, the construction of over 9,000 homes, the recovery of the neighborhood’s fire station, and increased public transit options.

For her, the Industrial Canal lock replacement proposal is a slap in the face to her community, which is still working to get back on its feet. “We have not received any benefits from all the times that they have done damage to our community. Not a park, not a community center, not a school, nothing. We had to pull ourselves up. So for them to come back to us and disregard all the things they have not been held accountable for is just outrageous. [The lock] would be a death sentence for us.” 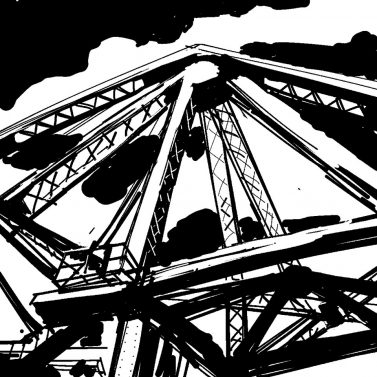 Reverend Willie Calhoun Jr., another community activist who has been vocal in his opposition to the Corps’ proposal, is chiefly concerned about the consequences of the construction on the levee system: “The moving of the lock from St. Claude over to the north side of the Claiborne Bridge is posing a lot of threats to the community. There’s no way they can say they’ll do that safely and not impact the levee system. What they’re saying is they’re going to play Russian roulette with the community.” While Calhoun feels that no financial benefit would be worth the risk to the community, he also stresses that from the perspective of the Ninth Ward, the Corps’ promises of economic returns seem pretty hollow. “The only benefit is to the maritime industry. There is no economic benefit—for every dollar they spend on this project, they say they’ll get four back, but that’s for the U.S. over 50 years, not for the local community. Who is being endangered, and for whose benefit?”

The Army Corps of Engineers believes there is hardly any other choice but to replace the lock. According to Ricky Boyett, the lock is a “working antique,” built almost a century ago by the same man who designed the Panama Canal, and “too small to handle modern cargo.” In an era where the shipping industry is seeing drastic restructuring, consolidation of regional ports all over the world, and newly updated infrastructure (including the recently replaced and enlarged locks on the Panama Canal), the New Orleans port is falling behind. “The location is a confluence of the busiest and third busiest waterways in the region, and the lock that’s there now is the bottleneck at the confluence of these waterways,” says Boyett. The lock’s age has meant extensive repairs every year. Boyett reports that the year before, the lock was shut down for 120 days, which had a devastating impact on the maritime economy. Since shipping is one of the most important parts of the city’s economy, for an organization whose primary mandate is maximizing profit from the waterways, it doesn’t seem like refusing to keep the infrastructure up to date is even an option.

However, the neighbors and community members were gathered at St. Mary’s to register their opposition, not to hear a cost-benefit analysis.

That New Orleans has been painted into a corner economically is in part a result of the Faustian bargains made in the 19th and 20th centuries by industrial capitalists who designed and financed railroads, dams, and canals, completely shifting the human relationship to natural resources. The practice of dredging, for example, where river bottoms are cleared of mud and plants to allow better navigability for shipping vessels, made projects such as the Gulf Intracoastal Waterway possible. While dredging must be done continually within this shipping model to avoid buildup of sediment, in the long term, dredging has a detrimental impact on river ecosystems. Today we are observing the toll industrialism has taken on our environment. In Louisiana, the oil-polluted waters and rapid land loss make this impact nearly impossible to ignore.

The high price of industrial infrastructure can be easy to ignore when you take the wider view. From a federal perspective, environmental losses are outweighed by economic gains, and any disruptions for those living in construction zones are just the cost of doing business. If, as a consequence, there is a certain inevitability behind proposed economic projects like the Industrial Canal lock, it is easy to see why any gestures made by federal organizations to include local perspectives come across as merely a formality.

Any community should be able to decide whether the costs of these projects outweigh the benefits when they are the ones primarily absorbing these costs. If smaller communities are given veto power, then the burden of proof would be placed on developers such as the Army Corps. In order to convince those who would be most impacted by construction, the Corps would have to hold themselves to higher standards; superior flood protection, environmentally conscious designs, and evenly-distributed profits would engender community support, making everyone equally invested in the larger economic structure. Instead, by overlooking the human cost of engineering for decades, the Corps’ decisions have led to nothing but mistrust and resentment in the Ninth Ward.

“This first thing I need for you to know is, I don’t think you have anybody here that lives in these communities that’s in favor of this project,” Reverend Calhoun told the Corps at the March hearing. To illustrate his point, he invited anyone in the audience who was in favor to stand up. No one stirred. When he asked those who were against it to stand, each person sitting in the pews of St. Mary of the Angels church rose together. The unity of the Ninth Ward has created a formidable obstacle for the Corps. Hopefully the Corps will understand that more is now required of them than force of will and Manifest Destiny. Otherwise, this fight will be divisive and volatile, and it’s hard to imagine how anyone can emerge from it a winner.