These guides have been produced lovingly and carefully since 2014 by a group of individuals who seek to confront the existing lack of accountability in the branches of Louisiana government, and in the election process more generally.

Vote early and vote often! If you are registered and don’t care, please find someone who is currently incarcerated, on parole, undocumented, or otherwise disenfranchised from voting, but wants their opinions heard. You can vote for their interests.

Just in time for your post-Mardi Gras blues, we’re having another Election Day in New Orleans! Featuring races for two judges and a state legislature representative, this election is sure to be one heckuva nail-biter for anyone inclined to pay attention.

Courts of appeal have the authority to review judgments of district courts within their constitutionally-assigned geographic area. They hear criminal and civil appeals (except for capital appeals, which go straight to the Louisiana Supreme Court). Appeals are first heard before a panel of three judges. In some cases, a panel of five judges may be necessary to decide the case. If the court of appeal is considering overturning its prior decision, the case will be heard “en banc,” meaning before all of the judges who sit on the court of appeal. The most important function of the appellate courts is to issue “opinions” on the cases they hear. Opinions are long, written decisions explaining the factual and legal reasons why the appellate court either affirms or reverses the district court’s judgment. Opinions are very important because lawyers can rely on the appellate court’s reasoning when arguing other cases. Appellate judges write the case law that decide later cases. It is very difficult to overturn an appeals court decision.

Longtime (nearly 30 years!) Clerk of Civil District Court Dale Atkins is running for this position, with endorsements from United Teachers of New Orleans and the AFL-CIO. Credited with implementing an efficient e-filing system in her office, Atkins is praised for her public relations and congenial personality. She lost the District Attorney’s race to Eddie Jordan in 2002.

Orleans Parish Criminal District Judge Robin Pittman enjoys a reputation among attorneys for being exacting, consistent, and rule-following, and has been credited with running “one of the most efficient sections of court,” according to the Metro Crime Commission. (One of the criterion is beginning court on time, a surprisingly unpopular practice among district court judges.) Since 2009, she has presided over many courtroom proceedings, including the Chelsea Thornton criminal insanity determination. After being played by the District Attorney’s office over a fake subpoena, she fined a domestic violence survivor who “refused” to cooperate with a criminal investigation. Pittman is a regular attendee and contributor at Mid-City Neighborhood Organization meetings.

Summary: Both candidates seem smart, professional, and qualified. Our concern with Dale Atkins is that she may not have the requisite familiarity with the legal process to make her an efficient appellate court judge. Robin Pittman’s style seems well-suited for this position, but she may be too much of a rule-follower to make progressive interpretations of the conservative, state-friendly statutes on the books in Louisiana.

This race is for Helena Moreno’s position in the Louisiana House of Representatives, vacated when Moreno won a seat on City Council last year. The 93rd Representative District contains part of the upper French Quarter, most of the CBD, a section of Mid-City, and a sizable chunk of the 6th and 7th Wards.

Whoever wins this race will be responsible for representing New Orleans’ interests at the state legislative level.

Campaigning for your vote is El Anderson, a youth advocate and former NORD playground supervisor. As a teen, Anderson worked for the City through summer workforce development programs, becoming a youth leader at Kingsley House. He also held employment at Juvenile Education and Training, a program for youth on probation and parole. He tried to run against Helena Moreno for City Council last October, but was disqualified for failing to file state tax returns. This candidate has been endorsed by DJ Jubilee.

Kenny Bordes is a labor lawyer and pro bono counsel for indigent civil litigants representing themselves in Federal Court. He also hosts a weekly show called “Overruled Radio” on WHIV, on which he discusses legal issues pertaining to civil rights advocacy work. The founder of the NOLA Film production company, Bordes advertises his artistic chops as a voice actor: “One of my best attributes is a vocal range of unique characters; from kids show ‘Donkeys’ to scary killers over the phone.”

Also in the ring is Royce Duplessis, currently the Chair of the City Planning Commission (CPC), the City’s zoning advisory board. A former energy and public utility lawyer, Duplessis worked as Chief of Staff for former City Councilmember James Carter. (Carter, a former trial counselor for the Orleans Indigent Defenders Program, is credited with pushing forward the creation of the Independent Police Monitor.) On the CPC, Duplessis voted against whole home short-term rentals, and encouraged testimony “on behalf of poor people… struggling to survive in this city.” He also sided with activists to delay the demolition of the Canal Street Ferry terminal until RTA releases design plans more in-step with commuter and resident concerns.

French Quarter bartender and former candidate for Senate (he got 3.9% of the vote against Steve Scalise in 2016) and Criminal District Court Clerk (he got disqualified for listing his party affiliation as Green instead of Democrat), Danil Faust is a mixed bag of political positions. A proponent of reproductive rights, pay equity for women, LGBTQ rights, and alternatives to fossil fuel energy, Faust has an 86% rating from the National Rifle Association. His hero is Andrew Jackson, because he “took a bullet in the chest defending his wife’s honor.” He has spoken up against law enforcement raids of French Quarter strip clubs, and he rejects Koch Industries’ influence on media news outlets.

Summary: Royce Duplessis seems like the most serious candidate of the bunch, with political experience in urban development and design on the City Planning Commission. Kenny Bordes might be good too.

This judicial post was vacated when Tiffany Chase was elected to the Court of Appeals last year.

Taetrece Harrison recently was acquitted of aggravated assault charges alleging that she waved a gun in a stranger’s face inside a CBD parking garage. A long-time family lawyer, Harrison lost the 2014 primary for Orleans Parish Civil District Court to Bernadette D’Souza. 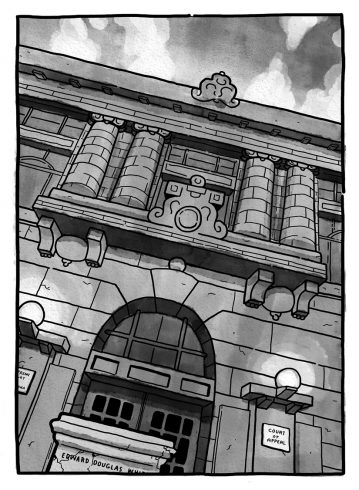 The first woman elected to represent District E, Ellen Hazeur served two terms on New Orleans City Council in the 1990s. She negotiated with the EPA to remove and remediate soil at the Agriculture Street/Moton Elementary School Superfund site, and to create reasonable buyout opportunities for homeowners who wanted to relocate. Hazeur also secured resources for expanded firefighting services in the Venetian Isles. She left City Council in 2000 to serve at her current post, First City Court Clerk. (The First City Court oversees small claims and civil lawsuits up to a certain dollar value, as well as some evictions.) After Katrina, Hazeur held landlords accountable for going through legal eviction processes for tenants displaced by the storm. She has also facilitated major technological upgrades for the Clerk’s office. Over the years, she’s received endorsements from the LGBT advocacy group Forum for Equality, United Teachers of New Orleans, and the AFL-CIO union. She lost an ugly 2011 Civil District Court race against Regina Bartholomew, whom she accused of benefiting from the financial and political connections of Bartholomew’s then-fiancee, Metro Disposal owner Jimmie Woods. (The engineering firm owned by Hazeur’s husband currently holds two active contracts with the City of New Orleans, totalling $348,118.24.) Hazeur was a donor to Jay Batt’s City Council campaign in 2010. Batt, who lost to Susan Guidry, is a Crimestoppers Trustee and was tapped to be Donald Trump’s Louisiana campaign chair.

Richard Perque served on the City’s Human Relations Commission, which addresses discrimination in employment, housing, and other sectors of public and private life. Perque is currently on the Louisiana Commission on Human Rights. Endorsed by United Teachers of New Orleans, AFL-CIO, Desiree Charbonnet, Helena Moreno, and Nakia Shavers (Perque is on the Board for the Dinerral Shavers Educational Fund), Perque comes from a Louisiana political family. His grandfather, “Pappy” Triche, was a long-serving state legislator, and his mother is a federal judge. His 2013 campaign for Traffic Court Judge was undermined by a nasty PAC-funded mailing that targeted Perque, the host of that year’s Pride Family Day, for being gay.

Summary: Ellen Hazeur seems to have a solid record of representing her district on City Council in the 1990s, and by all accounts, runs an efficient Clerk’s office at the First City Court. Richard Perque does important work on behalf of Louisiana residents who report discrimination. Of the three, Taetrece Harrison—with her extensive experience with the nuanced practice of family law—may have the most relevant legal credentials for this job.

This voter education guide is published primarily as a resource and does not constitute an official endorsement of any candidate or proposition by ANTIGRAVITY or New Orleans Harm Reduction Network.