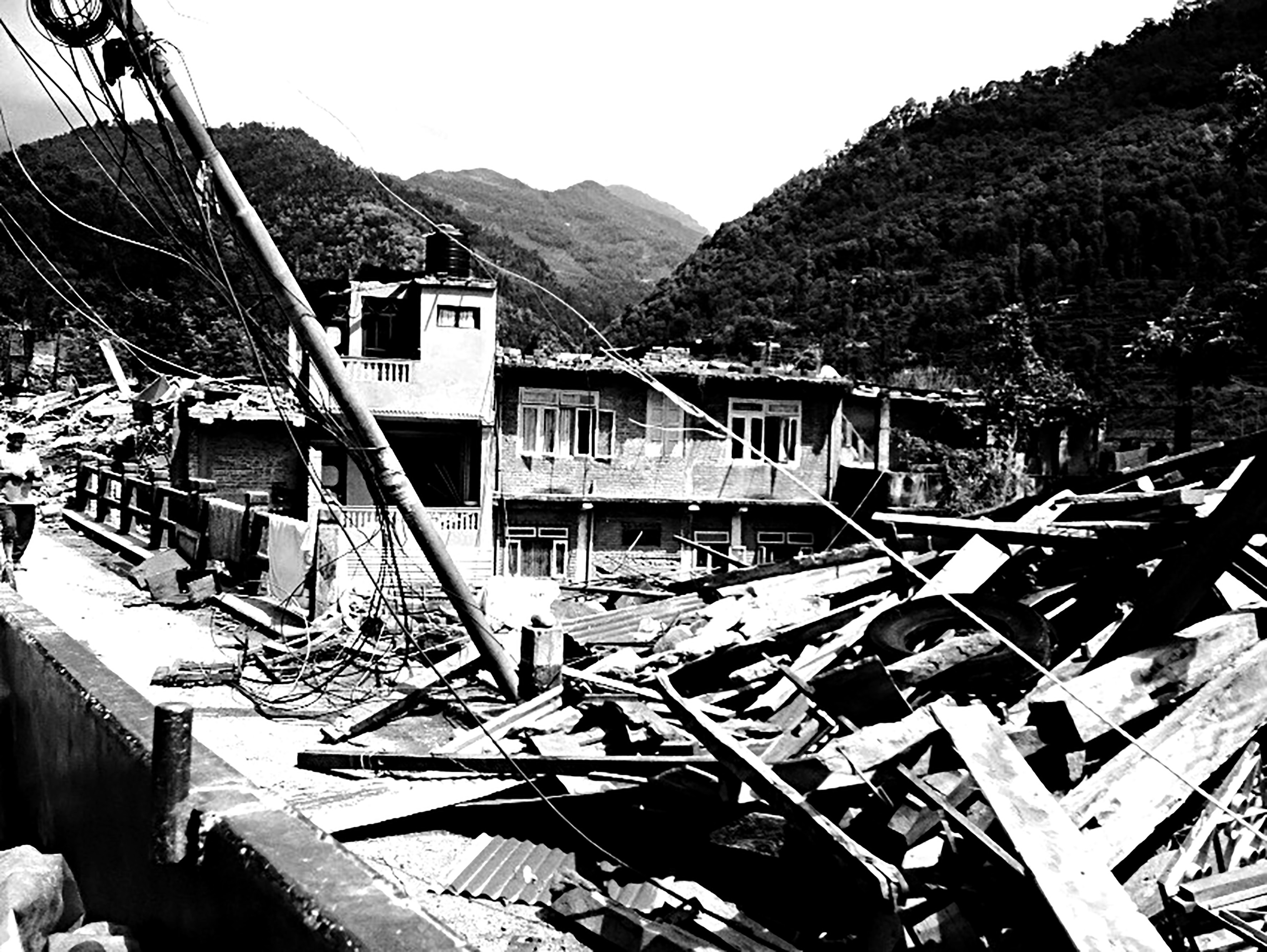 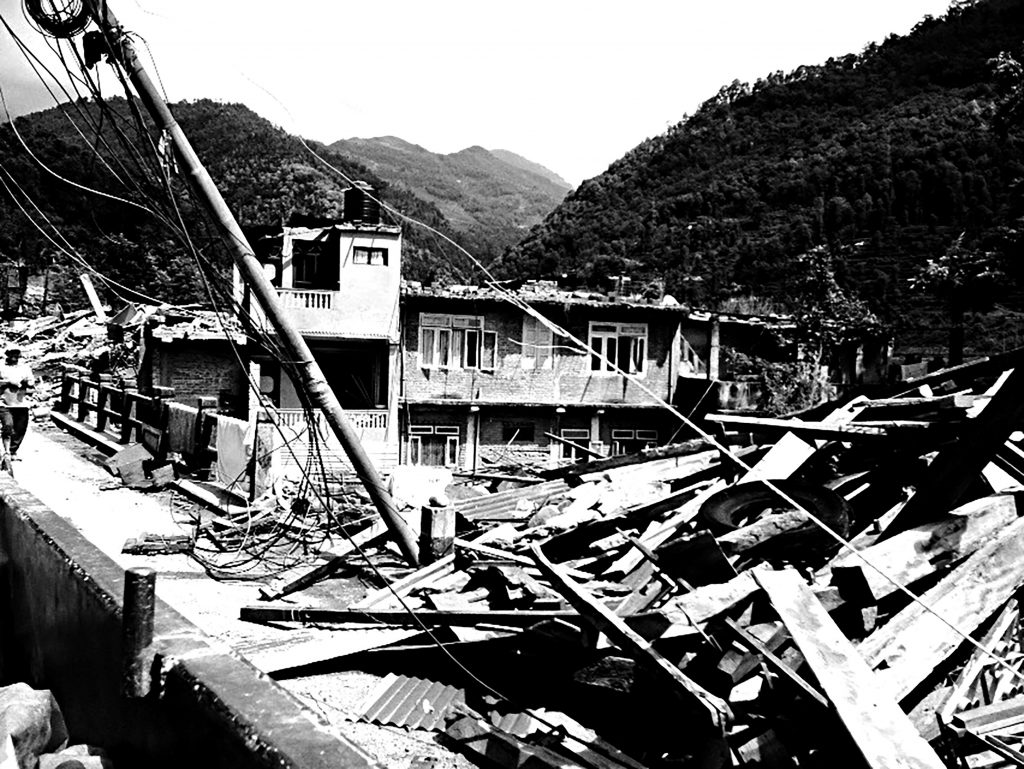 I left New Orleans to pursue an MA in Buddhist Studies in Nepal last August. Last month I experienced the most traumatic event of my life, though it was nothing compared to many others around me. I’d like to share that experience not to promote media sensationalism or make people depressed, but rather to raise awareness of something that’s happening on the other side of the Earth as the people of Nepal try to get back to normality. People are often filled with a desire to help when these unexpected disasters occur, but don’t know how. Right now, Nepal needs support more than ever and I’m presenting an immediate way to relieve their suffering. We’re all in this world together, whether we choose to acknowledge it or not, so even if you can’t contribute financially, just keeping the good people of Nepal in your hearts can make an impact.

The quake happened on a Saturday. I woke up a little late that morning after a long Friday night out in Kathmandu’s main tourist district, Thamel, which I rarely visit and usually despise. I didn’t do my normal meditation practice first thing that morning, figuring I’d wait to visit the holy Boudha Stupa to practice there around 11. Yangtang Rinpoche, a high lama who’d spent 25 years in a Chinese prison camp, was doing a public ritual for long life (tsa wang in Tibetan) that day, which I planned to attend after finishing my meditation practice at the stupa. I went to the prostration boards at the stupa and remember noticing how empty it was for a Saturday. I completed my prostrations, only 100 that day, and intended to head to the empowerment ceremony. The Great Boudha Stupa is one of the holiest sites in all of Tibetan Buddhism. Hundreds of pigeons are constantly perched on the side, waiting to be fed by locals doing circumambulations around the structure.

As soon as I finished and began packing my belongings, I noticed all the pigeons fly into the sky at the same time. At that moment, an indescribable force completely took over everything around me. Don’t ask me why, but my first thought was “wow, these pigeons’ wings are really strong.” After realizing how ridiculous that was, I fell into a state of complete confusion for about ten seconds before realizing I was experiencing an earthquake. My first instinct was to run, but there was nowhere to flee. I began to panic, and noticed my friend Ngawang a little ways to my right. He was completely stoic, squatting on the prostration board like a surfer. Next to us was a smaller stupa, about 30 feet tall. As the ground continued to rumble, the top to the stupa completely crumbled right in front of me. Thinking the rest of my surroundings were going to crumble the same way, I hid under the prostration board to protect myself. My legs were poking out slightly and I remember being scared that they would be crushed by more falling bricks. The ground continued to rumble for a long time while I remained under the board. Completely scared for my life, I was uncertain when to get up and assess my surroundings. When it felt like the ground had stopped shaking, I rushed over to Ngawang to see if he was safe. I was feeling a total overload of adrenaline mixed with panic and confusion. I’d never felt so close to death. 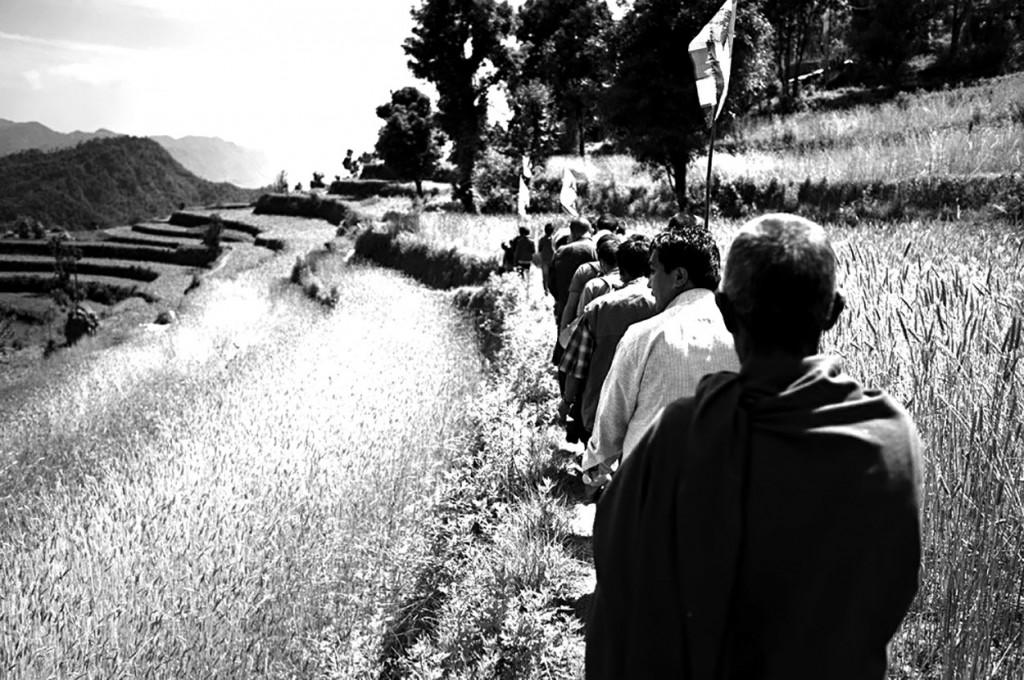 Ngawang was unscathed and oddly composed. The ground continued to tremor as we talked about what had just happened. Bricks were spread all over from the fallen stupa. One older Tibetan man walked back to the board he was sitting on, removed the bricks, retrieved his bag, and walked back out as if nothing had even happened. Ngawang and I walked to the upper level of the stupa to see the damages around the circle. Statues, malas, and singing bowls from the surrounding shops were strewn all over the ground, but the shops had remained undamaged. We decided to wait inside the wall separating the stupa from the rest of the area. I began to exit, but felt another tremor and immediately ran back inside the gate. I’d never felt an earthquake before. The feeling was completely foreign and I had absolutely no reference point to put the experience in perspective. I knew the shake was strong, but couldn’t tell just how strong, and what the impact would be. We sat next to the butter lamps by the stairs leading to the upper level of the stupa, next to two monks. I remember seeing one of the security guards touching his joined hands to his head, throat and chest, symbolizing keeping the Buddha in body, speech, and mind. Looking at that guard’s devotion, I realized just how fragile and fleeting life really is, and how much life is a shared experience even though we tend to think we’re the only ones experiencing it.

Maybe I was still in shock and denial, but I thought the days would continue like normal. I had never heard anything about aftershocks and how dangerous they can be. It wasn’t until an older American expat, who has lived in Kathmandu for 30 years, told me she had never felt anything like that in her life that I realized the severity of the situation. From that point on, the news became progressively worse. I slept outside of the Hyatt Hotel for the next several days and the death count continued to increase day by day.

It’s easy to freeze in a situation like this and feel nothing can be done to help, but that is the worst thing to do. Back at the monastery where I study, one of our head lamas and co-director of the Chokgyur Lingpa Foundation, Phakchok Rinpoche, was quickly transforming the monastery into a depot armed with food, shelter, and medical supplies. I realized just how minor my experience was compared to thousands that were surrounding me. Rinpoche was unshaken by the situation, transforming his sorrow into activity to relieve those in immediate need. By the second day, he was already sending teams into the mountains for reconnaissance missions. Many of the monks at the monastery are from the regions that were heavily damaged and were able to direct aid to places that might be otherwise overlooked. For several days, I slept on a beach chair under an umbrella I’d taken from the pool area of the hotel. The aftershocks continued for days. After seeing that my own residence was safe to reenter, I left the Hyatt and went back home. 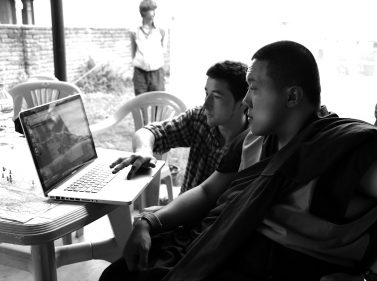 Having my own situation secured, I was overwhelmed, as were many, with an urge to do something about all the devastation around me. I went to Phakchok Rinpoche and asked him what I could do. He directed me to his assistant, Ani Laura, who put me to work using my media skills. My task was to download the photos from the monks coming back from trips to the hard hit regions, transcribe their reports for the website, and find out what was still needed to be done in the villages. This was by far the hardest thing I’ve had to do, emotionally. The hardest was hearing them complain about the smell. After several days of bodies lying under bricks, the air in the villages was unbearable. Hearing some of the stories of devastation and loss was heartbreaking, but there was no time for tears. The positivity of the entire staff was the only thing keeping all of us going and the only way relief could be continuously distributed. It was an incredible learning experience, seeing how trauma can be redirected into positivity if everybody keeps a cohesively strong spirit. I stayed and worked with the Chokgyur Lingpa Foundation for the next three days. I flew out of Kathmandu on Sunday, over a week after the initial earthquake, as I had originally planned before the disaster. Leaving everything in such disarray was difficult, but knowing that I could help from abroad was a bit of a relief.

Now I’m back in the US and the adjustment is not easy after seeing firsthand the depths of the devastation. As New Orleans is well aware, these massive natural disasters don’t just go away when they stop making headlines. Nepal is going through the most difficult time the country has ever seen. People are still unable to trust the ground beneath their feet. The only way to relieve any of this is to maintain awareness of the situation and keep sending relief to the thousands who have lost many loved ones and are now homeless.

For more info and to consider donating to the Chokgryur Lingpa Foundation, check out earthquakerelief.cglf.org