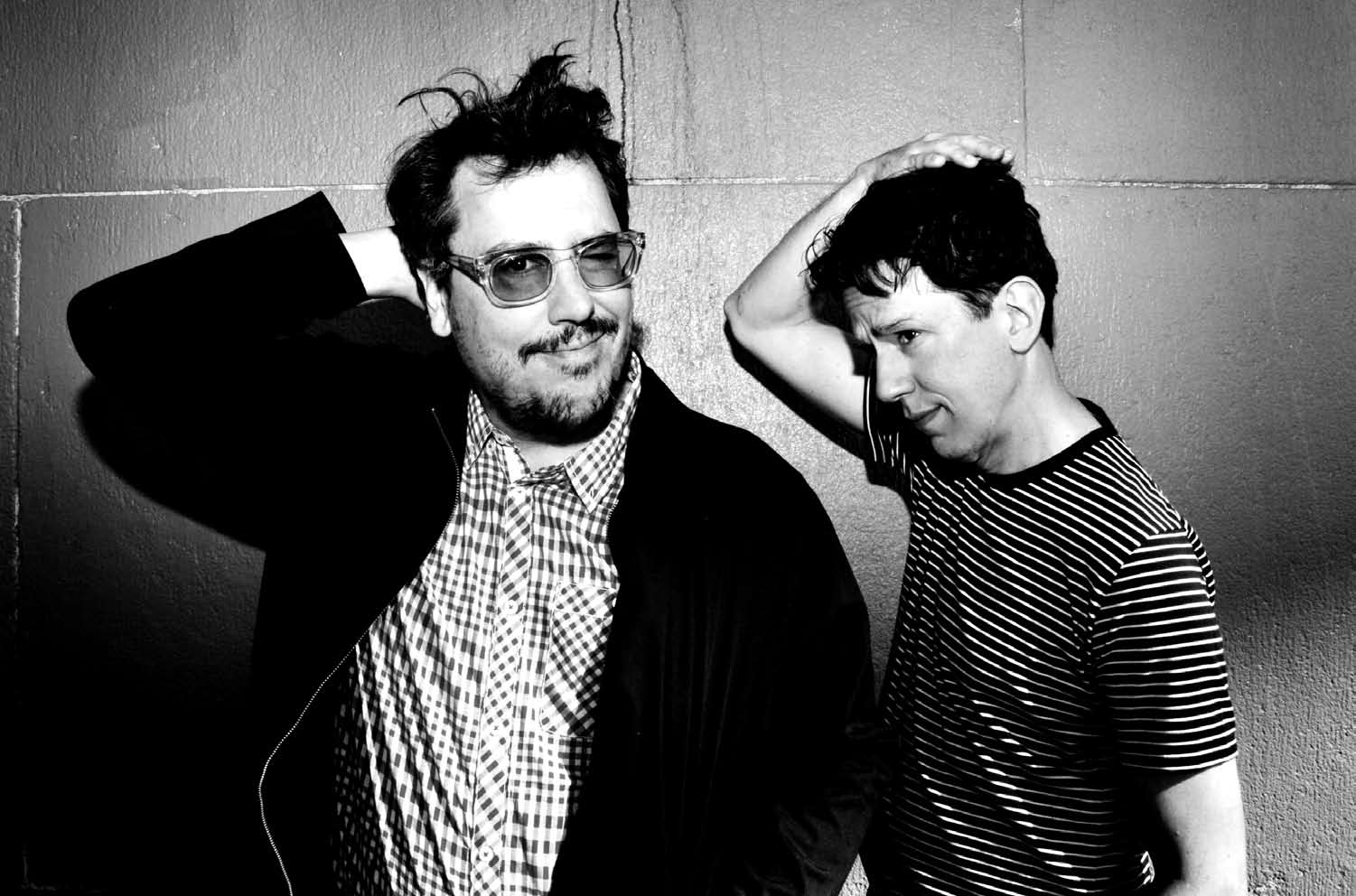 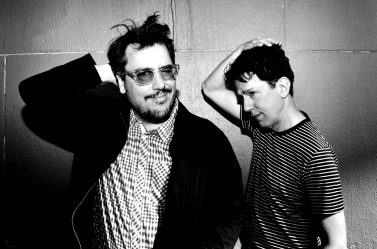 John Linnell (pictured, on the right), one of the founding Johns of They Might Be Giants (together with John Flansburgh), was gracious enough to chat with me in anticipation of the band’s upcoming show at the House of Blues. TMBG’s 16th studio album, Nanobots, will be released this month. We talked about sustaining success, the changing landscape of the music business and the perils of performing for children.

I was researching you guys and came across “Dial-a-Song.” I think a lot of people now, with the Internet, are trying to make new and exclusive material for their fans. It seems like, whether it was on purpose or not, They Might Be Giants were on the cutting edge back in the day.

We like to spin it that way. I don’t know what we were on the cutting edge of, because nobody else ever had a Dial-a-Song. But it was a way to be at home and listen to music without going out; or to choose your music just sitting at home. I think we thought it would be nice for the shut-ins to experience what we were doing. It was before we had a record deal, really before we started playing out a lot, so it was kind of us reaching out before there was even a way for us to be heard easily. And it was a local call, which meant for New Yorkers it was cheap; and we were a local band at that time. Now everyone’s accustomed to the idea that you’re sitting at home and you find music you want to listen to, and that’s just ordinary. But we weren’t exactly anticipating that; I don’t think we had any idea that was coming. We just thought it would be cool to have this relationship where you call us up on the phone and listen to a song.

You and John have been playing music together forever. My name is Dan, and some of my closest friends are also Dans. Do you feel like there’s some sort of extra connection that you get with other people who have the same name?

I think there was a smaller set of choices at one time. For a period of time, it was me and John, and everyone else in the band was named Dan. We had a drummer, guitarist and bass player all named Dan or Danny. And we have a different drummer now; but we still have the Dans, and Marty’s our drummer. I think it’s probably a function of just that there was at one time a smaller pool of names that parents thought were appropriate for their kids.

Adults have a feeling of responsibility to the band when they go out. It’s very clear that kids do not have this sense.

Do you think Marty ever feels like an outcast? You have the Johns and the Dans, and then there’s Marty over by himself.

I think he likes it that way.

What spurred on the kids records? You’ve got three or four of them out now.

We started making kids records in a very un-serious way. I think we’re still not that serious about it, secretly. I think we were expected to do sort of remedial music, because that’s what kids music usually is, like correcting kids’ ignorance and stuff like that—which is a pretty harsh thing to lay on kids. They generally don’t get to be entertained in the way that adults do. So some of the stuff we called educational, but it really was entertainment. Anyway, we started when we got an advance from our little independent label to make a kids record. We were not thinking this was a major career move, but it was way more successful: it sold more copies than the adult record that came out that year. So we thought, well maybe we should do more of this.

So has it become something you guys enjoy doing—playing the all ages shows and the kids music—as well as something that’s been commercially successful for you?

Yeah; it’s harder. The adult shows are a lot easier because we’re much more in our own environment. We’re comfortable saying whatever we feel like. The other thing is I think adults have a feeling of responsibility to the band when they go out. It’s very clear that kids do not have this sense. They do not feel it’s incumbent on them to applaud, or face the stage, not talk through songs, not talk while we’re talking. It’s a little bit demoralizing, actually, how cavalier the kids are when we’re up there trying to do a formal performance. I think it makes adults nervous if they don’t applaud at a show. You know, just to be polite. Kids don’t have that.

Here at ANTIGRAVITY, a lot of us writers and many of our readers are performers or artists or somehow creative in our own right. You guys have been making music for a long time—30 years now, right?

So is there anything to which we lowly little weekend performers have to look forward?

[Laughing] Do you mean from us or in your own lives?

Either or. We’re just looking for something to look forward to right now.

We set the bar low for our humor.

[More laughter] I don’t know if I can help you, man! Tough world out there. We were lucky to establish ourselves a long time ago. We got a very solid, loyal following. This is our 16th album. So to us it’s this luxury that we’re not starting from scratch. I don’t know what it would be like to start from scratch now. So in a word, the answer to your question is no. I have no useful advice for young people starting out. Except, and maybe this is the really important thing: we started out with the idea that we liked doing it even if it didn’t make money. If you’re not thinking about it in this sort of compulsive way—we got up every morning thinking about writing songs, and playing, and really caring about it and enjoying it—it’s all going to wind up bad, anyway. You have to figure out what you want to do. That was the philosophy that we started with.

In that vein, are you surprised at all that you guys have been as successful as you have?

Surprised is the wrong word, I think. Surprise kind of suggests something sudden, and obviously we’ve been doing this for quite a long time. And I don’t even know if it’s true; in 1990 we were really excited when we put out our third album and it kind of took off internationally and on college radio, and we started going “Wow.” We didn’t know what to expect, didn’t know how it was supposed to go. So we felt really lucky; but I think we felt like, “I guess this is just how it happens.”

While we’re talking about how long you’ve been at this, how have you managed to stay funny for so long? Even stand-up comedians and actors seem to have a bit of a shelf life in their careers.

I think part of it is that we were never really that funny. I think we set the bar low for our humor. We were never pee-your- pants funny– that wasn’t what we were about. There’s no pressure for us to make it funny. It’s just sort of a byproduct, like the methane that comes out of petroleum drilling. Our humor is the natural by-product of writing songs. There’s stuff that makes people smile. I think we always sort of thought that was okay.

You guys have a fairly unique sound that has been consistent over the course of your career. Are there any particular influences or inspirations you go back to?

I would say there are some that are very obvious. We’re at the age when the coolest thing we ever heard when we were little kids was the Beatles. John and I were in nursery school, but everybody knew about the Beatles. It was kind of like everybody got it. I was in New York and I was four when they first came to America, and I knew about it. That was how huge it was. At that time it seemed like music was a lot more important than it is now; it was culturally important. Popular music was this evergreen thing at the time. Everybody listened to everything. If you listened to AM radio, you’d hear country music and soul and rock and all these people mixed together, and they were all kind of up for grabs. Everybody could like all of it. I think that’s sort of where we came out of, like all the people in our generation.

A lot of your lyrics are plainspoken and almost prosaic, more like a story or conversation that happened to have a background track. Is that a conscious style choice, or is that just the way you guys started writing songs?

I’ve never heard anyone describe it like that. I think you’re right that we’re attracted to a kind of conversational style of lyric writing that reminds you that it’s somebody talking. And it might be a fictitious person doing the talking, but it sounds more personal, I think. That’s totally right, that’s something both John and I gravitate to, which is a lyric that is not artificial-sounding. It sounds like somebody’s thoughts or somebody talking. Are there any big themes on the new album? We’re trying to make one up. We didn’t have one when we made the record, but maybe after the fact we can just pretend there was one. “Replicant” and “Nanobots” are about this idea of reproduction. But that’s only two songs.

You come through New Orleans pretty frequently. Do you have a particular affinity for the place, or is it just one of those stops where you usually do pretty well, so you keep coming back?

We come there because people come and see us. We will come where ever anybody asks us. But yeah, I like New Orleans. I mean, who the hell doesn’t like New Orleans? It’s such an interesting place. There’s so much great culture and food and other stuff going on. It’s a beautiful city. There’s a lot to like in New Orleans. I’m a big fan of the wax museum down there.

They Might Be Giants will play the House of Blues on Friday, March 8th, and their new album, Nanobots, will be available March 19 on Idlewild Recordings. For more info, check out theymightbegiants.com