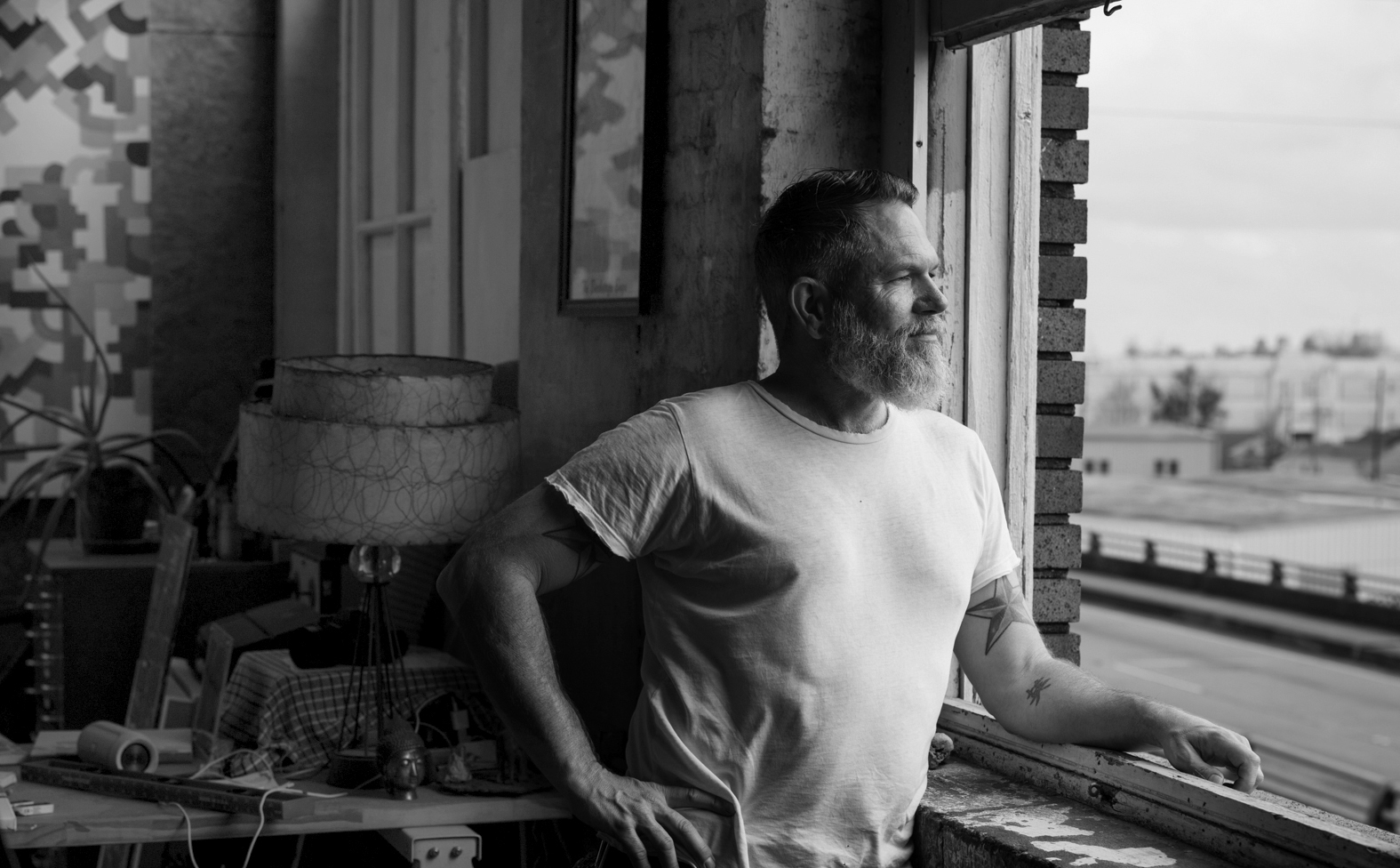 From Johnny King’s third story art studio overlooking the railroad tracks at North Robertson Street, Rebirth Brass Band’s “Do Whatcha Wanna’” blared from the radio speakers. It was Mardi Gras day, and feeling an unusually strong gravitation towards celebrating Carnival in the studio, King heeded Rebirth’s advice and stayed put. “What I realized I wanted to do that day was stay warm, drink coffee, and work on paintings,” he says.

Little did he know that the former Schneider Paper Building, which provided work space for more than 200 artists of every medium, would be shut down by the Louisiana Office of State Fire Marshal in just three days. “I skipped carnival this year to paint, and I am so ridiculously grateful that I did, since that’s the end of this chapter,” says King.

On an early Friday in March, the fire marshals entered the building in response to a complaint and closed the building off to its occupants. That following Monday, they issued a mandatory evacuation notice, giving the artists two weeks to clear everything out of their studios.

“We had two weeks… to get everything out, or possibly lose access to our livelihoods and our creations. We have recording studios that have sessions booked, wood shops that are in the middle of commissions. We have artists, such as myself, who have shows coming up. I understand it’s a safety concern, but if you’re evicted from an apartment, there’s due process and you’re given an appropriate amount of time to move everything out. Two weeks to have everything moved out of all these shops is not enough time,” says King.

For photographer and costume designer Leah Floyd, moving out of a studio space means moving eight years of creating and collecting machinery and material used for producing her work. “I’d rather move out of my house than move out of my studio,” says Floyd. Without a car or space in her home to keep everything in her studio, the notice left her in a state of total disarray as to what to do next. This is the overarching atmosphere at the North Robertson studios, as the artists are forced to make tough decisions about where to house and work on their creative output.

According to King, the fire marshals were anything but sympathetic to the artists’ situation. He claims, “The way that they were treating people in the building, you would think that they thought we were squatting. All of us had signed leases. It’s where I go to work. But the way they were approaching it was as though we were doing something wrong being there.”

King is one of the lucky ones who managed to find a new space in the developing St. Claude art scene in Old Arabi, across Orleans Parish lines into St. Bernard. “I knew for me the only way to possibly make this move is if I knew exactly where I was going. So my former boss at the Contemporary Arts Center suggested her friend Matt’s spot. I shot him a line and came right out.”

Like many artists, King had been using the Schneider Paper building as a hub for creative output since 2011, when noted painter and building manager James Michalopoulos acquired it, with the intention of providing an affordable environment to support the creative output of New Orleans’ artists. In many ways, the story of the building tells the story of not just New Orleans, but the broader shift of American urban environments from industrial epicenters, to subcultural artistic hubs, and into gentrified spaces no longer accommodating to the creatives inhabiting it.

The building was originally a combination of several breweries operating under the name Union Brewery, founded in 1912. There are several parts of the building that can still be found directly relating to fermentation and brewing. In the 1960s it became the headquarters for Schneider Paper and Janitorial Products. Hurricane Katrina forced Schneider Paper to relocate to Baton Rouge in 2005. The space sat vacant for several years before turning the corner from industrial to artistic production.

“When I got it, there were some artisans in here and a couple of artists and there was a little tile business, and a recycling business, and a guy making kombucha. So there were quite a few interesting little businesses in here when we got it. And we thought we would expand it in the direction of arts and crafts, and to some extent woodworking and other artisanal occupations,” says Michalopoulos.

Over the course of the last eight years, the building continued to expand, providing affordable studio space for low income artists of all backgrounds. The combination of the multifaceted creative minds working in the space, mixed with the building’s labyrinth of stairwells and hallways, led to an array of artistic display and a sense of bewilderment around every corner. The giant freight elevator at the North Robertson entrance and the building’s tower section certainly added to this mystifying experience. It was unfortunately these unconventional aspects of the space that led the fire marshals to bring down the hammer.

According to Michalopoulos, “The way that I’ve been told is that there was an individual who made a complaint about people allegedly living here, which is against the code. We strictly prohibit people living here and have it written in the lease. But the City felt it necessary to be completely compliant in every sense, which is their job and we support them in having the safest possible environment.”

According to multimedia creator Ben Miller, the space at North Robertson may not have been up to the living codes of a condominium in the CBD, but was certainly not the death trap the fire marshals are making it out to be. “People keep wanting to compare this to the Ghost Ship in Oakland, but it’s totally not the same thing. That was a warehouse with people locked into it. We’ve never once had anything here like that,” says Miller.

These “anything goes” type of areas in New Orleans are suddenly being put under more intense scrutiny than many are prepared to handle, and it is directly affecting the community, pushing the New Orleans art world out of New Orleans entirely and into St. Bernard Parish, or for many in the North Robertson space, into a storage unit for an undeclared amount of time. “The Franklin Climate Controlled Storage is filled to the gills now with people’s dreams,” says Johnny King. “I’m 49 years-old and I couldn’t afford to put my stuff into storage, because storage is where dreams go to die.”