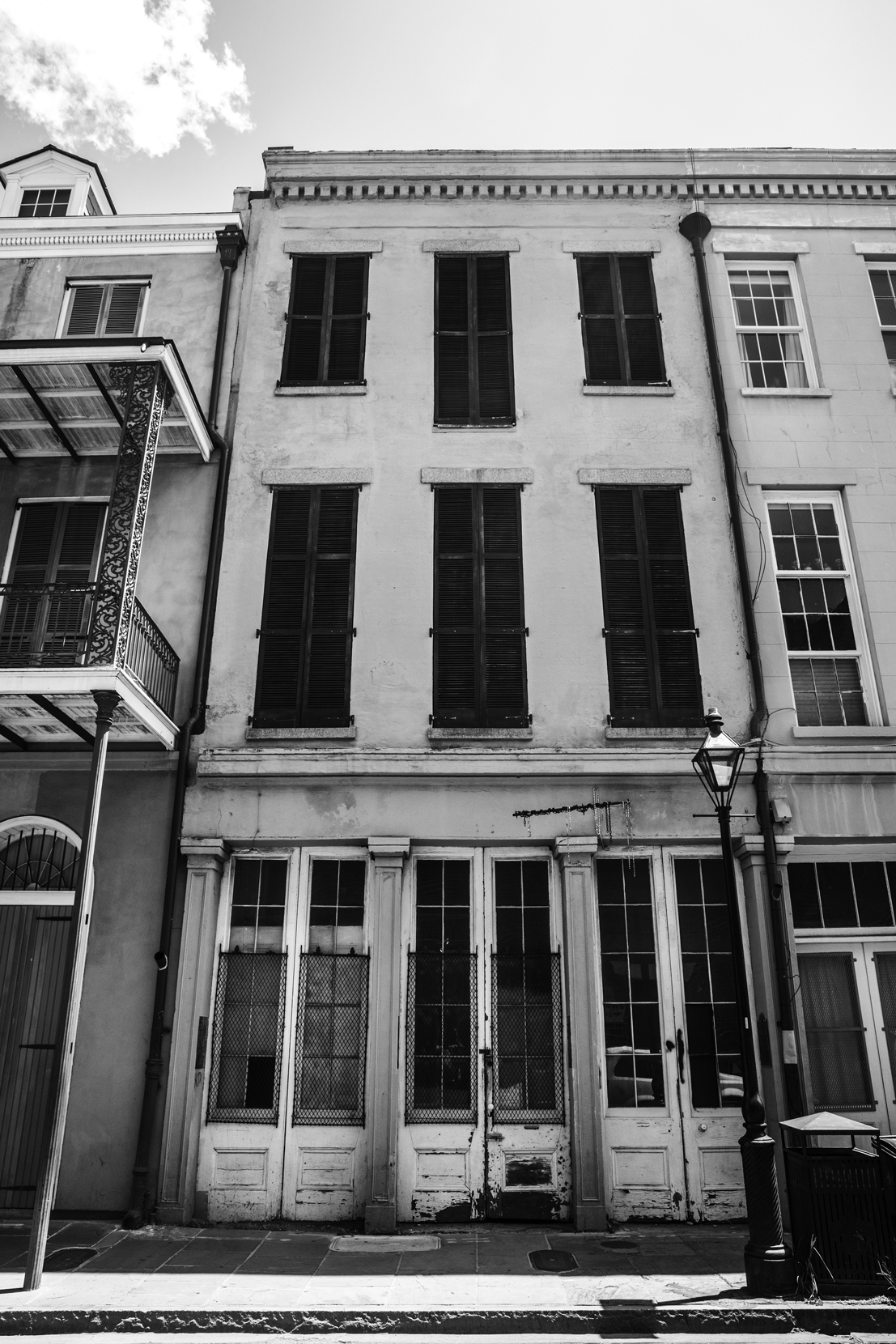 The French Quarter was built by Black hands—yet in this historic district, encrusted with memorials and markers, there was (until June) not a single historical marker honoring the accomplishments of Black people.

In 2016, 12 Years a Slave author Solomon Northup came close with a marker on the Esplanade neutral ground, but the French Quarter itself remained a whites-only history zone. This has just changed with the placement of a plaque at 527 Conti Street marking the birthplace of L’Union and the New Orleans Tribune, two radical Black newspapers from the Civil War era.

Both papers were published and underwritten by Dr. Louis Charles Roudanez. L’Union, founded in 1862, published for much of its two-year run only in French, limiting its readership. Its bilingual successor, the Tribune, founded in 1864, ran for five years and 1,200 editions, and was the first Black-owned daily paper in the United States.

According to historian Leon Waters, one of the speakers at a roundtable to celebrate the marker’s unveiling, L’Union and the New Orleans Tribune differed in their positions, demands, and visions of what society should look like after the defeat of the slaveholding class. Although L’Union called for the total abolition of slavery, Waters characterized it as “the mouthpiece of the numerical few, a privileged social stratum: the free people of color.”

The 1830 census tells us 87% of Black Louisianans were enslaved. In a more typical slaveholding state, Mississippi, 100% were enslaved. This was because Louisiana, as a colony of France, was subject from its founding to the Code Noir, a 1685 French decree which drew legal distinctions between the rights and roles of whites, enslaved Blacks, and “free people of color.” The Code Noir banned Jews from French territories entirely.

New Orleans’ free people of color, the largest component of that unenslaved 13%, resided largely in the oldest downtown neighborhoods of New Orleans. Most spoke French, and their ancestries were variously African, European, Caribbean, and First Nations. Many New Orleans Creoles trace their family histories back to this community. While these gens libre were still unable to vote and heavily restricted in their rights relative to colonial whites, many managed to amass wealth and property, even in some cases becoming slave owners.

To the white Americans who took over New Orleans, however, the gens libre were just another bunch of… Black persons. When American domination took hold in 1803, the government began rolling back the limited rights accorded free people of color. This accelerated as opposition to slavery began to harden and Louisiana whites became increasingly paranoid about any form of Black existence outside slavery.

The position of the Creoles was tenuous, but they did have property and education, along with connections overseas. The Tribune founder, Dr. Roudanez, was a son of one of those affluent families. Like many well-to-do Creoles, Roudanez went to school in Paris, gaining a degree in medicine from the Sorbonne. He was out on the barricaded streets during the 1848 French revolution that abolished slavery in France’s colonies. Alas, his home state of Louisiana was by then in its fourth decade under U.S. occupation, and New Orleans was the nation’s largest slave market.

While not on the scale of the horrors of enslavement, the situation for Louisiana Creoles grew steadily worse through the mid-1800s. In 1857, the same year Roudanez came home from France, the Governor of Louisiana wrote that all free people of color should be physically removed from Louisiana, complaining, “Their example and association have a most pernicious affect [sic] upon our slave population.” In 1859, the Louisiana Legislature ordered that all gens libre immediately “choose masters for themselves and remain slaves forever.” 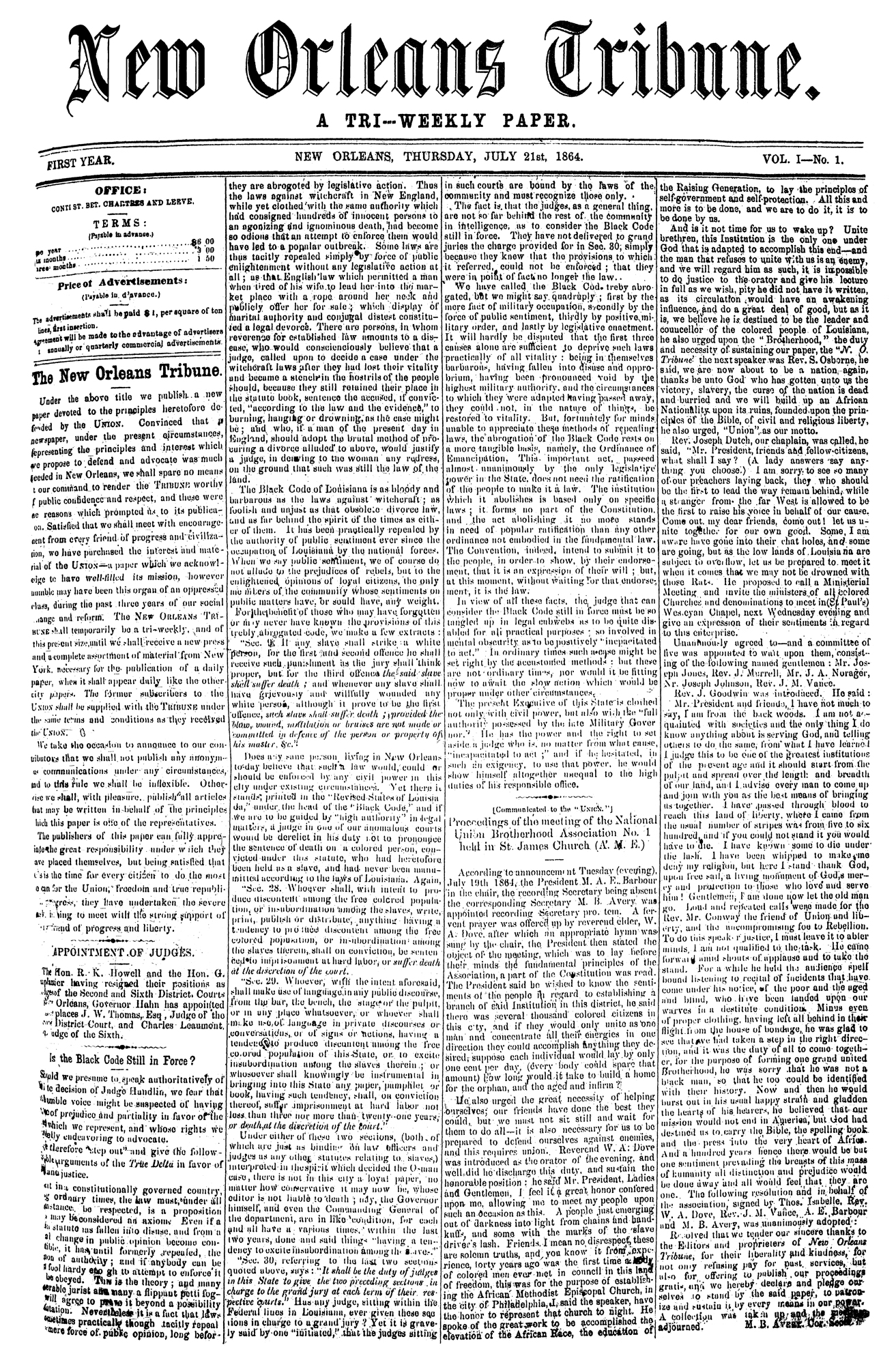 In the estimation of Leon Waters, the Tribune’s position represented a broader, bolder agenda than that of L’Union by including the interests of enslaved Africans, who had become a vanguard within the Civil War. Key to what made the Tribune dangerous was its emphasis on solidarity between Creoles and the formerly enslaved. The Tribune insisted that civil rights, including the right to vote, be guaranteed to all men, not just whatever subset white power deemed deserving. “It is not by remaining isolated that the oppressed can gain redress,” an 1865 editorial said. “Let the people know, all over the land, who we are and how many we are. Let us organize in one body and march through the streets.”

Oppression always seeks to play one faction of the oppressed against the other. The New Orleans Tribune stood firm against dangerous compromises such as the Louisiana Legislature 1864 “Quadroon Bill,” which would have given voting rights to those who had one-quarter or less “Black blood.” These kinds of bills, a clear sop to the Creoles, were unacceptable to the Tribune, as was any extension of the right to vote contingent on poll tests or other conditions. The Tribune fought not for incremental improvements but revolutionary liberation.

It was a ferocious, unrelenting bullhorn of a paper. Amid the tumult of the Civil War, the Tribune not only promoted the emancipation of Black people but asserted their essential humanity. Beyond insisting Black men be given the right to vote without exception or qualification, the Tribune demanded full integration, including streetcars and schools, 90 years before Brown vs. Board of Education, and proposed the South’s plantations be seized, divided, and parceled out to the formerly enslaved.

Besides its fiery editorials and opinion pieces—unsigned, for the safety of their authors—the Tribune contained news, letters, poems and short stories, philosophical treatises, straight-ahead moralizing, and barbed satire. The Belgian abolitionist Jean-Charles Houzeau, whose memoir My Passage at the New Orleans Tribune is the paper’s best known contemporary account, says satire was the hallmark of longtime Tribune editor Paul Trévigne who, after enough death threats, found he could push the envelope further if he did so with a smile and a wink.

It’s hard to overstate the militancy of the Tribune’s positions, either by the standards of its own time or ours. Roudanez’s great-great-grandson, Mark Charles Roudané, notes in The New Orleans Tribune: An Introduction to America’s First Black Daily Newspaper that Roudanez and company “rejected the paternalism of many white radicals and moderates.” In 1865, the Tribune’s editorial committee wrote:

At the first step that we attempt to make, we find tutors around us, who take upon themselves to redress our conduct, and try to prescribe what we have to do. We have asserted our manhood and we will do it again. We need friends, it is true; but we do not need tutors. The age of guardianship is past forever. We now think for ourselves, and we shall act for ourselves.

Those who wrote, edited, and printed the Tribune endured constant threats of violence at a time when murder and massacre of Black people by whites was widespread and unpunished. The staff were undaunted, writing, “If there is no protection for us at the hands of the municipal police or the military guard, if there is no redress for our people before the Criminal Courts… then let us form at once societies for self-protection and have recourse to personal defense.”

Speaking at the marker’s June unveiling, Mark Charles Roudané called it “the first marker in the French Quarter to recognize Black resistance and Black achievement.” Standing alongside Barbara Trévigne, a descendent of Tribune editor Paul Trévigne, Roudané said, “A once hidden history is now made visible, and now becomes part of a public memory. We have a right to this memory.”

Dr. Elizabeth Rhodes, the President of the Louisiana Creole Research Association, told WGNO it was a six-year ordeal to get the marker placed. “To be perfectly honest with you,” Rhodes said, “I had to channel the ancestors to find the strength to keep going.”

The Tribune demanded full integration, including streetcars and schools, 90 years before Brown vs. Board of Education, and proposed the South’s plantations be seized, divided, and parceled out to the formerly enslaved.

Witnessing the struggles of Black New Orleanians to have their lives, efforts, and accomplishments recognized or valued calls to mind the actions of our recent Mayor, Mitch Landrieu. Landrieu is seeking to build his post-Mayoral career by stealing credit from the city’s Black-led Take ‘Em Down movement. He’s even published a self-valorizing book (In the Shadow of Statues: A White Southerner Confronts History) that deliberately erases decades of counterpower struggle by Black New Orleanians against Confederate monuments. Fallacious histories such as Mitch Landrieu’s book, which position Black people and their sufferings as mere background for the actions of a heroic white protagonist, are intrinsic to the fabric of white supremacy—a dynamic echoed by savior-mentality behaviors seen in Teach for America, the careerist opportunism of out-of-town academics, and the mindsets of even apparently well-intentioned grassroots white leftist activists.

“Too often,” Roudané writes, “the narrative concentrates on what happened to Blacks and what was done for them, not what occurred within their communities and the acts of resistance that emerged from them.” It was apropos, then, that the speakers and historians at the Tribune marker’s unveiling mapped a strong line connecting the struggles of today to the radical politics of 1800s New Orleans: a fight against oppression, waged by the oppressed, spanning centuries.

Angela Kinlaw, of Take ‘Em Down NOLA and the People’s Assembly, spoke about the inspiration the Tribune provided her organizations in their unwavering commitment to demolishing white supremacy—including its symbols and statues. There are those who claim they’re sympathetic to some of Take ‘Em Down’s goals, but feel the group asks too much and ventures too far. These are the same criticisms made of the Tribune 150 years ago, as depressingly familiar as the death threats and racist harassment directed at Take ‘Em Down’s lead organizers.

Seeing how that past connects to this present, we might well ask ourselves, and others: what work are you doing in this historical moment to materially contravene oppression?

Ms. Kinlaw and Leon Waters both identified capitalism itself as an oppressive force. “It is my opinion that we must embrace the lessons of these newspapers to assist us in our fight today,” Waters said. “The road to complete emancipation is blocked by the philosophy and ideology of reformism. I believe we must take on the revolutionary role to obtain complete emancipation, and that role has been blazed by Louis Charles Roudanez and the men and women of the Tribune. We were successful in getting one foot off our backs in the Civil War. We still have one foot to get off our backs today. It’s called wage slavery.” 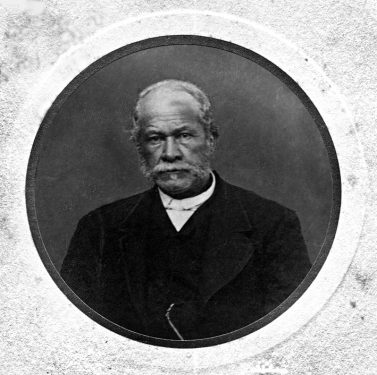 At the Tribune, Roudanez was part of a collective effort to both advance and exemplify Black possibilities. He was a freedom fighter who turned his resources to the service of the oppressed. This is an aspect Ms. Kinlaw touched on in her speech; she urged each of us to inventory and use what she calls our “spheres of influence”: finding leverage that we can direct towards liberation. Certainly Dr. Roudanez, wealthy and potentially white-passing, was able to look past how much he had to lose; he had the courage to put himself at risk.

For more information on Dr. Louis Charles Roudanez and the founding of L’Union and the New Orleans Tribune, check out roudanez.com and Le Musée de f.p.c. (lemuseedefpc.com). The plaque honoring the building where these newspapers were published can be found at 527 Conti St. 70130.

Image of the inaugural edition of the New Orleans Tribune and photo of Dr. Louis Charles Roudanez courtesy of roudanez.com.