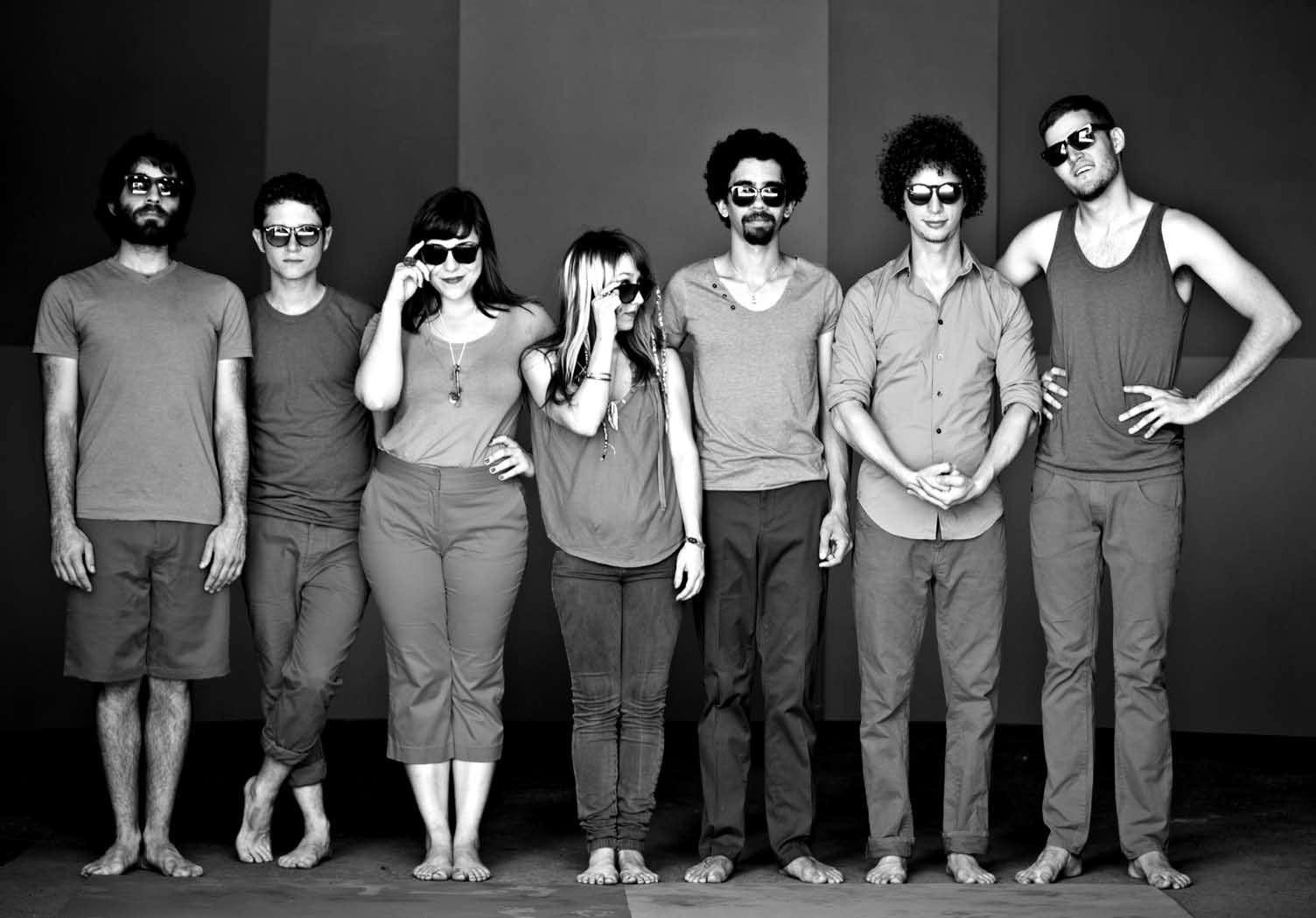 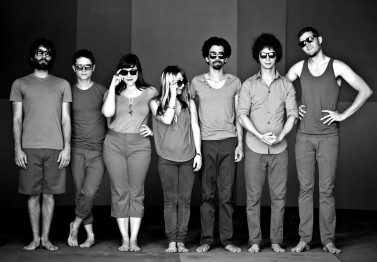 I’ve interviewed duos, trios, brothers and sisters, and best friends; but never have I faced the challenge of fitting a seven-member band into one interview. I met up with five of the seven members on two separate occasions in their Fountainbleau practice room, as well as their favorite place to grab a drink, Twelve Mile Limit, to find out how they do it. Sweet Crude is the product of seven people who really love to sing and dance, but decided to do so while incorporating traditional Cajun French. However, this is not quite your mamandem’s music from way back when. It’s as if the Louisiana  Purchase never happened, but indie rock did. They do it all while trying to preserve the language represented in traditional Cajun and Zydeco music, but taking it out of context and crafting their own progressive beat-driven works. With seven multi- instrumentalist on stage, it’s an orchestral experience where dancing is contagious and you can’t help but sing along, even if you don’t understand the words.

Sweet Crude is compiled of familiar faces from the New Orleans indie rock scene. Alexis Marceaux ( lead vocals, additional percussion), the Craft brothers Sam ( lead vocals, violin, additional percussion) and Jack ( keyboard, vocals) and John Arceneaux (drums) once performed together in a project called Glasgow. After they decided to form a mega-group, they pooled from longtime friends in the musician community. There they found Marion Tortorich, a tiny gymnast who plays a drum kit twice her size, and long time friends Stephen McDonald ( bass) and Skylar Stroup ( keyboard, trumpet, vocals) to form an indie rock band with––get this––no guitars. After building a band, a truly unique sound and incredible live performance to boot, Sweet Crude has hit the studio to tie it all together in their debut EP, Super Vilaine, coming out this December.

How did the seven of you get together to form Sweet  Crude?

Alexis Marceux: Sam and Jack are brothers so they met when they were… young.

Sam Craft: We just had this bond. Can’t describe it really… Glasgow was started by Jack and I and in its latest incarnation; John Arceneaux and Alexis Marceaux were in it as well. Seperately from that, Alexis and I had our own thing going on (in more ways than one) and started Alexis and the Samurai; and those two were running parallel for a while. Then those  members of Glasgow got together with some friends of ours. We knew Marion  from the Neutral Ground, high school, those kind of days and Steve McDonald comes into the picture because of another group I was in called Antenna Inn. He was a multi instrumentalist in that band.

Marion Tortorich: And I was their  merch girl! [laughs]

AM: I got to know everyone pretty quickly when I first met Sam because  he invited me to sing a Pink Floyd song with them at One Eyed Jack’s.

SC: Then Skylar came into the picture.

AM: Skylar and Stephen were best friends from high school.

Skyler Stroup: So Stephen and I started Alexis and the Samurai and it was a great ride.

“In more ways than one?”

AM: [laughs] I actually met Skylar in College, but he doesn’t remember.

SS: No. Ridiculous! I don’t remember getting lunch together one time! We met several times before that.

AM: it all goes back to Alexis and the Samurai, sort of. We tour a lot and started covering this French song, “Parlez-Nous à Boire.” Every time we played it, people really seemed to like it so we started thinking… how can we take this traditional Cajun music and do something modern to it? For that  particular song, we put a bounce beat to it, which is why people responded to it so well. Then the initial idea was to form a supergroup with all of our friends. We even called it megaband for a while.

SC: We had this idea for a sound with everyone singing, everyone playing drums. I’m not even sure how that  entered the picture but we had lots of conversations where we just asked ourselves: what would be our ultimate band?

AM: Lots of vocals. Lots of percussion. That was the main thing.

How many drums are on stage at once?

For being a relatively new project, you’ve been busy performing, I see.

SC: We’ve been playing a lot in Lafayette, Baton Rouge, and New Orleans trying to build a regional  following.

AM: We’re about to go to New York to play Joe’s Pub.

MT: It doesn’t sound like it, but it’s really swanky and apparently some really incredible people have played there. We’ve been fortunate to have played on some awesome stages already, but I think the two most notable ones were very recent. The first was in Lafayette to a bunch of the Festival International, Festival Acadiana, and CODOFIL people––people whose approval we care about the most. We wanted to show them that we’re on their  side, pay our dues.

SC: We definitely have the preoccupation that we’re sending up an old tradition because we’re singing a language that is synonymous with a genre of music. We don’t want people to be misled and show up expecting to two- step or waltz because it’s different than traditional Cajun French music.

JC: We’re the grandkids of those people.

MT: We don’t want to see traditional Zydeco music go anywhere. We want to preserve that. We’re focused on trying to get in touch with it.

SC: It’s time. I think people are ready for it. The other great show we just played was with the Mardi Gras Indian Orchestra at Tipitina’s.

JC: This is my take on it. You have this old New Orleans Man with a mustache who, no matter where he goes, is the coolest dude in the room. Dave Montana is a cool-ass dude. On top of that, this man is not just a cool-ass dude, he’s a Mardi Gras Indian Chief. He’s a connoisseur of cool. He’s also an awesome dude––so welcoming, so warm. He invited us in.

AM: We were in the green room before the show, going over a song with them  that they were going to perform with us. We did this broken down version of the song just to go over it with them.  Jack started playing cello and they immediately just took to it—

AM: I swear something was in that room. We were all looking at each other wondering—

JC: I actually forgot who I was.

AM: That’s a perfect way to put it.

JC: It was like two people trying to speak two different languages to each other and finding this powerful  common ground.

MT: Still speaking their own languages, but still understanding.

AM: “On Est Pare,” the song we had them come up on, is very much  inspired by what they do. We pulled from our culture on that song and they fit right in.

You guys have such strong stage  presence. Is it as fun to be Sweet  Crude as it is to watch?

AM: We really love each other and we’re best friends having the best time in the world. I think the epitome of showing the crowd how much we love each other  was during the Tip’s show…

MT: This moment was so dorky! [Sam and Jack] didn’t even see it! Right when the Mardi Gras Indians finished with us and we’re walking off stage, we were caught up in this magical moment. I couldn’t believe it was really happening and then immediately Alexis and Skyler turn to each other, shout “YEAH!” and high five on stage.

SS: I was like, “Yeah. Of course we’re going to high five right now!”

MT: We were playing it so cool until  that moment, but that perfectly  represents who we are. At the end of the day, we are going to be jackasses and we are going to have fun!

Since we last spoke you guys have been recording. Tell me about that.

AM: We recorded at Marigny Recording  Studio with Rick G. Nelson, our favorite  person in the whole wide world. He was in the Polyphonic Spree, did strings for St. Vincent; he’s a multitalented man. He’s also our dear friend and we feel really comfortable with him, so during  the recording process he had a lot of really good ideas that we respected and used. He was like a band member.

SC: To keep with our whole bilingual thing we decided to call the EP Super Vilaine.

AM: It’s going to be five songs. It’s just a taste of what we do so far.

How was studio time with seven band members involved?

SC: Oh. There were some fireworks. MT: We had some moments, when everyone did group vocals.

JC: Tons and tons of group vocals and it was so much fun––crowded around a microphone—

MT: When we had to be quiet because  they were tracking, everyone was making obscene gestures trying to distract each other. Other than that,  everyone is pretty docile in the studio. No one really has an ego because we know that time costs money.

JC: I think the coolest thing about  going in the studio was realizing what a good group of people we have and good group of musicians. When your time came up, you got up, played your part  and it was done! Then when you can step back and listen to a recording after one day, you really appreciate with a seven piece how the group is cohesive and how close we are already.

Catch Sweet Crude on November 10th with the Lost Bayou Ramblers at One Eyed Jack’s and then for their Super Vilaine EP release party, also at One Eyed Jack’s, on December 6th. For more info, check out sweetcrudeband.bandcamp.com