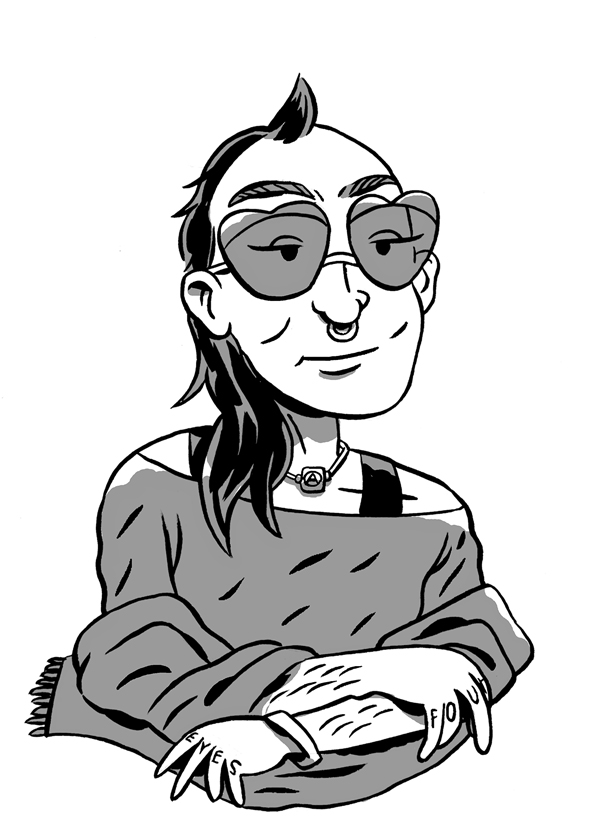 Shiloh lived in New Orleans for many years, and was a pillar of the Iron Rail anarchist bookstore and library back when that existed. Shiloh was lots of things and did lots of things, but to me and a great number of those grieving their death, Shiloh served as a beacon of hope in a world of utter shit. They were important—and it feels at present, indispensable.

There are, I think, a couple of lessons to be drawn from Shiloh’s death. One is the truth of our utter helplessness to prevent harm, our impotence in the face of the suffering society heaps on the least deserving. The other lesson is really just confirmation of something all who knew Shiloh already knew, which is that this wretched planet was unworthy of them, abysmally insufficient to their meager and reasonable needs.

There can be no indictment of humanity more damning than this: that Shiloh, who asked so little and gave so much, who was so loveable and loved, should find it unendurable.

Shiloh was easy to like, easy to admire and perhaps, as a consequence of their unselfishness, too easy to take for granted. Most of us in New Orleans knew Shiloh as an amazing parent, a devoted partner, a carer, and caretaker. Shiloh was a nurturer.

While we were all in awe of Shiloh’s apparently inexhaustible goodness, I’ll confess I never aspired to be like them; it didn’t seem possible. I don’t aspire to be a bird, or a basketball, or a beignet—while one could emulate those things, or try to imitate them for a little while, it would be silly to attempt to become like them. Shiloh set the bar so high it wasn’t even in sight.

When someone is as impossibly good to others as Shiloh was, we might forget that kindness is a choice, one that must be made over and over, in small ways and big ones, in private and in public. It’s a choice that requires sacrifice. But Shiloh was kind. That was how Shiloh was, though that was not all Shiloh was.

Shiloh fucked. Shiloh lived it up and did drugs and did amazing amounts of crime. Shiloh got drunk and broke their veganism on French Quarter cheese fries. Repeatedly. Shiloh made mistakes and tried to be better. They screwed up and took shit and soldiered bravely on, suffering and bewildered, while the rest of us smiled and said, “What a character!”

Shiloh was an an anarchist, and Shiloh was an outlaw. Everyone knew that. Like Shiloh’s kindness, it seemed intrinsic. They weren’t uptight, macho, or self-important about it, but laughing, joyful and spontaneous in their total and unremitting hatred of the law, its enforcers, and apologists.

I know a lot of people who hate police—why would anyone associate with someone who didn’t?—but I believe Shiloh deserves to be remembered as one of the all-time great cop haters, a high distinguishment in a competitive field.

Shiloh was set against not just the standard pantheon of oppressive forces—the state, capitalism, patriarchy, heterosexism, and white supremacy—but society itself.

Many of us survive in large part by making accommodations for the hostile reality of the world as it is. Shiloh didn’t survive by making accommodations; they survived by making war. Not as a lone wolf, not as an adventurist, but as part of a pack. Shiloh was a sharer, and their generosity remained miraculously untainted by the sometimes terrible bitterness of their existence.

If you believe, as I do, that one of the primary factors limiting revolutionary possibility is a failure of imagination, on Shiloh’s death we must not just rend our garments but stitch them up with dental floss and re-rend them, for Shiloh was a living example of just how much is possible if one is bold enough to abandon the dead end of respectability. They lived beyond the margins, in a fringe even those of us in the fringes might not have guessed was inhabitable. They were a thief, a street fighter, a con artist, and a cheerful criminal who had no particular hope of a better world, but never willingly gave the bastards an inch.

In September, the last time we hung out, we were fighting police and other white supremacists somewhere regrettably distant from New Orleans. Actually, in two cities, in two states, in one day. Shiloh set a ferocious pace. Besides how stunning they looked ninja’d up in sparkly black tulle, I remember their uncanny accuracy with the raft of stolen silly string our cadre was toting. Shiloh was a virtuoso of aerosol. In their capable hands a can of Dollar Tree “goofy string” was a Stradivarius. They hit their mark across improbable distances; the colored jets seemed to bound over and around obstacles, feinting left and right mid-spurt like a running hare, honing in to bedeck the target. Shiloh didn’t shy away from melee, either: they were sissy as fuck and absolutely fearless. They constantly broke their glasses.

What was Shiloh like to spend time with? Very smart. Very, very smart, with a restless appetite for ideas and a powerful, relentlessly applied revolutionary vision that grew, developed, and matured as they encountered new information or reexamined their own long-held ideas. They had a bleak, erudite sense of humor, by turns savage or wistful, a withering weapon they directed almost exclusively at themself.

Shiloh had a repertoire of characteristic movements that in a lesser person might be termed mannerism, but in Shiloh were authentic and endearing. Especially when speaking, they would hold their elbows in tight by their torso while moving their forearms, wrists, shoulders, and head with sinuous energy.

Shiloh was trans and an outrageous, incendiary queer. There’s no wrong way to be one’s gender, but Shiloh’s happened to be unignorably nonconforming. They were a weirdo; and if they ever apologized for it, they’d certainly quit doing so by the time I met them.

While Shiloh was wonderful, painting them as somehow flawless I think does them a disservice. They had their ugly aspects; they were into some fucked-up shit. I know bringing this up may offend some who are mourning Shiloh, but I believe in telling the truth. I’ll just say it: Shiloh listened to pop punk.

In their person, however, even this appalling flaw—such a deal-breaker in anyone else—somehow just added to their complex individuality. That’s how special Shiloh was. And Shiloh, true to form, defied the stigma. When someone called them out for it, they wouldn’t flinch. “Yes, AND? I love pop punk, fuck you!”

Shiloh stayed so true. Unlike almost anyone I’ve known, Shiloh remained dangerous, remained disreputable, uncompromised by age. They were a rare light by which to navigate.

And then they shot themself. It’s unfair how much the ending of a story can shape our perception of what went before. Shiloh of course had every right to blah blah autonomy blah blah self-determination… but it really fucking sucks that they did it. Shiloh was wracked by mental illness, which seems also the only scapegoat that can allow one to reconcile their hugely hurtful final act with the generosity and caring that were Shiloh’s lifelong hallmarks.

Suicide, so philosophically profound in the abstract, is a miserable, torturous nightmare for those who remain behind to pick up its pieces—in many cases continually, daily, for the rest of their lives. I’m not claiming space in the front row of those injured; and I guess it’s nice that Shiloh’s finally and indefinitely out of pain, but Jesus H. Christ does losing them hurt. It hurts, it hurts, it hurts, it hurts like a toothache except my entire guts, and every breeze reinflames the raw and throbbing nerves.

They’re safe now from my judgement and everyone else’s, so my anger is (as usual) useless. So too, I suppose, my grief. But I can’t come to terms with their death. I still want to think it’s just their biggest-ever scam, a fake-out to get money or duck a warrant. I know it’s not true, but I can’t help wanting it. I want to see them again; I want to hold them, and kiss them, and tell them again how much they mean to me. I can smell them; I can feel their cheek against mine. It’s so much realer to me than the insupportable notion of their absence. It’s absurd to think the sun would still rise and set on an Earth no longer containing the bright spark of sweetness that was our Shiloh.

I wish I’d spent more time investing kindness in Shiloh, rather than assuming they’d just continue to chug obligingly and affirmingly along in the outer reaches of anarchist praxis. I think that’s too much of how I took them—as a reliable inspiration engine, running on… what exactly? My dear friend, my darling comrade whom I loved, whom I revered, from whom I drew such strength, whose very existence was balm to me, and gave me hope—what was it exactly that fueled them?

I find, to my shame, that I cannot satisfactorily answer. We loved each other, we understood each other deeply, despite some deep differences… but I’d be lying if I said I ever took the trouble to really find out what they needed, what they couldn’t live without. And whatever they ran on, they ran out.

Obviously we all die sooner or later. When we do, and we go burn in hell, we may hope that the hand on the thermostat has even a modicum of Shiloh’s enormous compassion.

I’m not big on ritual, but I think in the case of Shiloh they deserve a little send-off. I think it would be only appropriate to heap up the rotten entirety of human civilization and set it ablaze for their funeral pyre. Ascending in the smoke of burning police, Shiloh’s pure and perfect spirit will be perhaps a little better satisfied, and smile upon us scum still here. It’s less than they deserve, but it would be a decent gesture.

When people die, there’s often a lot of claptrap said about preserving their memory. Most people are eminently forgettable. Not Shiloh, the sweetest, kindest and most outlandishly gay gangster ever to grace this worthless blue-green dunghill. The love they inspired was the noblest part of anyone lucky enough to know them; they were unmatched. They were immaculate filth.