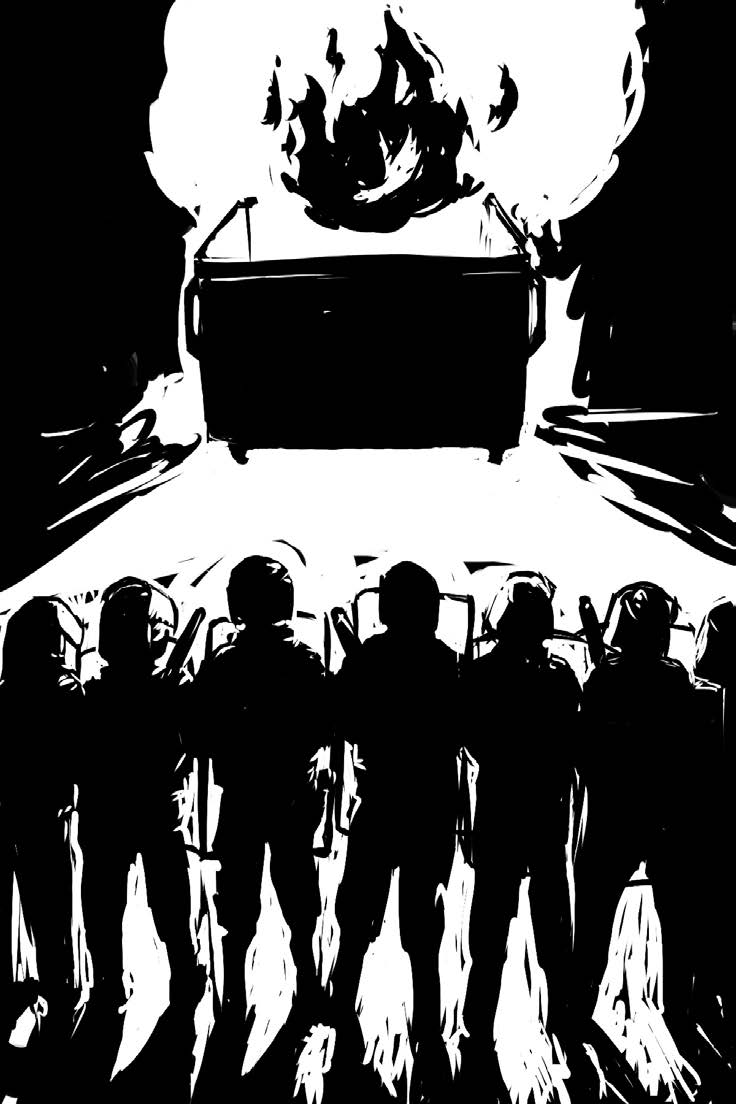 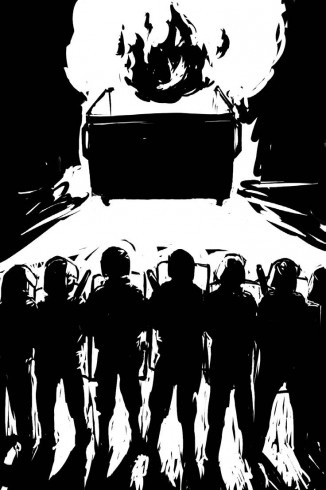 Across trash-strewn streets, a collection of neighborhood dogs were beginning their nightly chorus. Footsteps shuffled under piss-yellow fluorescents, as the wails reached their crescendo, seeping into cement cracks and over the rooftops of residential houses and warehouses alike. Tonight was like any other night, only competing for attention was another layer of auditory interference: the whoosh of helicopters circling a sector of the city just a mile from my bedroom…

A protest following the grand jury ruling—surprise, surprise—not to indict Michael Brown’s murderer and former Ferguson police officer Darren Wilson had wound its way for miles through Oakland earlier in the day, with protesters swarming freeway entrances and halting traffic for hours. I had just arrived home from spending much of my own day in Berkeley, and my initial urge was to stay in. My 20-year- old self was scoffing at such a notion, castigating me as a “sell out” for the crime of desiring anything other than joining the multitudes rallying against police violence. Ultimately, as coarse a motivation as it may be, the night’s potential entertainment value provided the highest incentive. I mean, this was Oakland. Some shit was definitely goin’ down. I decided I would go check it out, but maintain the role of casually detached observer. With this, I got on my bike and followed the helicopters.

A decision I’m glad I made.

I met up with the demo at 8th and Broadway. Evidence of foul play sprinkled the sidewalk around Starbucks, whose looted pastries were making the rounds amongst the protest’s participants. I arrived just in time to witness—from a safe, non-implicating distance—masked figures smashing through the glass of a Metro PCS and proceeding to empty it of its merchandise. Across the street, moments later, the discount supermarket met a similar fate. Individuals emerged with cases of beer, bottled water, and rumor has it—I didn’t catch this personally—someone even made off with the safe. Cases of Clif Bars lay littered mere feet from an overturned dumpster, its spilled contents now hissing and crackling. Meanwhile a block south, another dumpster fire raged, casting its formidable glow upon the shields and armor of the line of riot police. They were continuously announcing their dispersal order to the crowd. They’d let off a flashbang here, advance a few paces there, but were otherwise doing very little to quiet the maelstrom.

“I am a peace officer with the Oakland Police Department,” the call sounded into the night, interspersed with mic feedback. “By the People of the State of California, I declare this to be an unlawful assembly. If you remain in the area, regardless of your purpose, you may be arrested or forcibly removed…”

Now and forever:
fuck the police.

Pan to looting, fires in the streets, and other indicators of general disregard for such a threat. Large swaths of the populace live in unspoken terror of this very reality. And yet here I was— laughing hysterically! A stranger came over and offered me double-stuff Oreos!

Let me stop and address the black bloc for a moment. This symbol of rebellion is a powerful one. It has the power to arouse anger or fear; for others it compels and resonates to the very core of their being. If it bears any pragmatic relevance at all, arguably it can be measured by the degree to which it inspires a combination of all these emotions. And for the one who puts on a mask, maybe unleashing wrath upon institutions so emblematic of modern culture is a way to express and alleviate their own pain. Maybe it’s validating to find others in whom a similar discontent festers. It’s true not everyone vandalizing property is doing so out of some noble outrage against “injustice.” Sports riots are cited as an example of this. Many of those looters—or as I like to call them, latent entrepreneurs— disappearing into the night with cell phone chargers under their arms were merely seizing an opportunity. And that’s a beautiful thing. If you can’t appreciate the humor in that, then I feel sorry for you.

Let me also say: all you photographers crowding the scene, your work is even less appreciated than that of your counterparts blocking my view at concerts. But I get it. Nothing screams photo worthiness like the bravado of a masked kid repeatedly trying—only to succeed on attempt three—to hurl a chair through a shop window. And in a certain way, there is a value in the visual evidence that can embed itself into mainstream consciousness. But media-tors, consider two things: a) the moment is brimming with possibilities far more captivating than a flattened representation; and b) videoing or photographing people (including yourself ) committing crimes is just sketchy. Like anything, there’s a right way and a wrong way. Think it through. Now get out of the way.

In the aftermath of the evening ’s festivities, Mayor Jean Quan commended officers’ “tremendous restraint in the face of hundreds of demonstrators throwing bottles and rocks at them and provoking them for hours.” Their restraint could be summarized in two words: damage control. When citizens take to the streets en masse to protest your brutality, and all the world’s eyes are upon you, it’s in your interest to not meet fire with fire. But the time always comes when this saintly veneer uncloaks itself, and officers getting overtime to endure such treatment have to move in to restore law and order. And for my part, I had no intention of being around when it happened. After getting pushed a block north toward the Hilton hotel, I decided I’d had my fun, and receded into the backdrop of quieter streets.

Smash cut, 48 hours later. Against my better judgement, I found myself swept along in a march meandering through downtown, into the dark residential neighborhoods of West Oakland. The cop-to-protester ratio wasn’t inspiring much faith in anything veering from the formulaic protest model. The grace period was over.

The previous night, I’d rolled up to find the dumpsters characteristically positioned in the middle of a huge intersection, but this time instead of blazing triumphantly they were charred and smoking, recently extinguished by the fire truck cordoning off the area.

The air smelled like the New Year’s eves I remember from childhood. The protesters left defending their territory stood hopelessly outnumbered, and the officers—comprised of various Bay Area departments—seemed to be wasting far less time doting on dispersal formalities.

I could see this march, now making its way once again toward downtown, trending along a predictable trajectory. Cops’ readiness to snatch was palpable. So I wasn’t surprised to find, when the spray cans and rocks entered the mix, repression came swiftly. The formation splintered, a pack of riot cops apprehending one suspect, followed by more moving into the thick of the crowd. I ducked out on a road bisecting two condominiums, only to bike in circles trying and failing at every turn to catch back up. By the time I did, using the sidewalk to bypass the procession of police vehicles stretching for blocks, it was clear the party was over. People were already scurrying off in all directions. The Twitter feed effectively went dead.

This narrative demands some kind of conclusion and to be honest, I don’t have one readily available. The story continues, here in California and elsewhere—and especially Ferguson. And as I bow out, I want to simply offer my solidarity with everyone all over the world resisting police (internal and external) and those, unencumbered by tedious pacifist morality, doing what they feel is necessary.