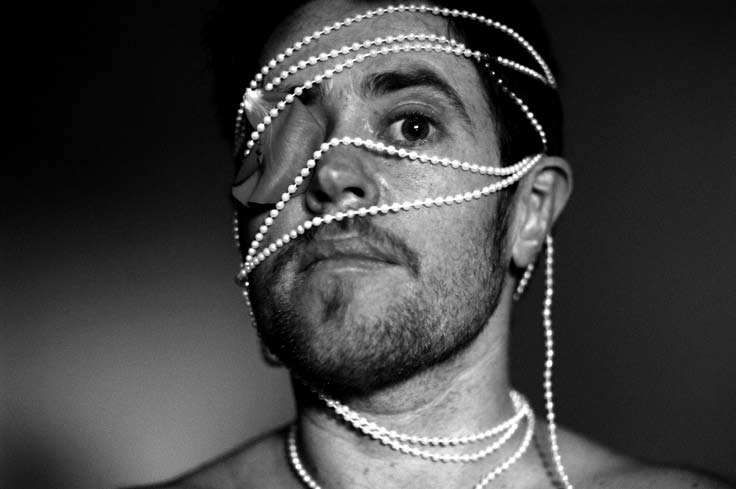 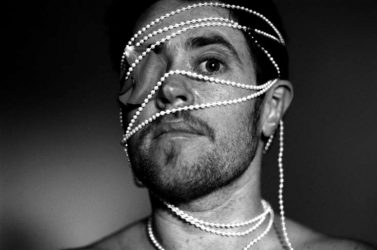 Plunging into the depths of  your own emotional heartaches for artistic inspiration is as old as art itself. But few artists strive to give their lives over to the creative process like Sunny  Drake. He describes himself  as usually in the middle of  an “art in life experiment.” A multi-genre performer, Sunny Drake created his newest show, Transgender Seeking…, out of  a desire to reflect on the connections between heartbreak and personal politics and to find support with each other in airing his dirty laundry on stage for all of  us to sniff. I spoke with Sunny Drake to talk about sex and the prison industrial complex, internalized homophobia and transphobia, and supportive shame.

Transgender Seeking… is a show you created. In non-press release form, can you tell me what it’s about?

Transgender Seeking… is a one person show using theatre, creative projections and some puppetry to explore the tensions between our political visions (how we aspire to live our lives) and the messy reality of feelings and the many ways we fall short of living up to our values. It’s about big visions and even bigger failures. It’s about being compassionate with ourselves and others but also challenging us to transform the ways we’ve been trained by society to do shitty things. A few audience members described their experience of seeing the show as “an entertaining warm shame.” They felt called out for the crappy things they do, but in the most loving and supported way. The show flips between absurd and realistic, tender and fierce, funny and poignant.

What was your inspiration?

I made the first (much shorter) version about five years ago when I was heartbroken. I find heartbreak brings out the messiest sides in me, the sides I’m not always proud of. It’s so much easier to live my politics when everything is going well, but when the shit hits the fan, I find it more difficult to live my radical politics. The default ways of behaving (that have been shaped by the messed up systems I grew up in) ooze to the surface. And because I’m not proud of these things, I’ve often tried to hide them rather than being accountable for them. And I know that lots of other people do this too, so I wanted to make a show that spoke to this and called myself and others to be compassionate for ourselves and support and challenge each other to keep growing and stepping it up.

What kinds  of multimedia can the audience expect to see and tell me everything about the puppets!

The multimedia is super integrated into the show—like not so much a screen behind the performer—more like projections onto objects or me, which I then interact with. Like an argument between the key character, Jimmy, and his projected online profile, one trying to present a glamorous-totally- shit-together image to potential dates, and the other inserting their slightly jaded interpretations. Or a projected montage into a suitcase exploring internalised homophobia and internalised transphobia… Surfaces spring up suddenly and disappear as quickly. The puppet makes a small but impactful entrance in the piece… I’m not going to tell you any more because I don’t want to spoil it!

How do you go about making a connection between “relationship scripts” and bigger  political issues like the prison industrial complex?

I’ve learned a bunch from prison abolition movements which seek to end the messed up ways that certain people are criminalized, and transform our society to deal very differently with what happens when we cause harm. I feel strongly about acknowledging that we all cause harm to varying degrees, rather than stigmatizing some people as the “bad” people. I think many of us (including myself) like to deny the ways we cause harm, because it interferes with our sense of ourselves as good people. The prison industrial complex (or the big web of business and political influences on the massive and growing prison systems) strongly shapes not only who is locked up in prison, but also a lot of aspects of life outside of the prison bars—including how we have relationships with each other. Like how we punish each other in relationships— either overtly or covertly. For example, when someone does something shitty to another person within queer or radical communities (cheats on them, is transphobic, emotionally irresponsible etc.), often that person who has caused harm ends up strongly punished through isolation, being ostracised from social spaces, etc., which is kind of like a way less intense but similar concept of locking someone away in prison. This in turn means a lot of us minimize and deny it when we stuff up, because we don’t want to be punished.

Transgender Seeking…  will be one-night only on Monday,  September 23 at 8 pm the AllWays Lounge & Theatre, 2240 St. Claude Ave. Tickets  are sliding scale $5-$15. For more information,  check out sunnydrake.com.