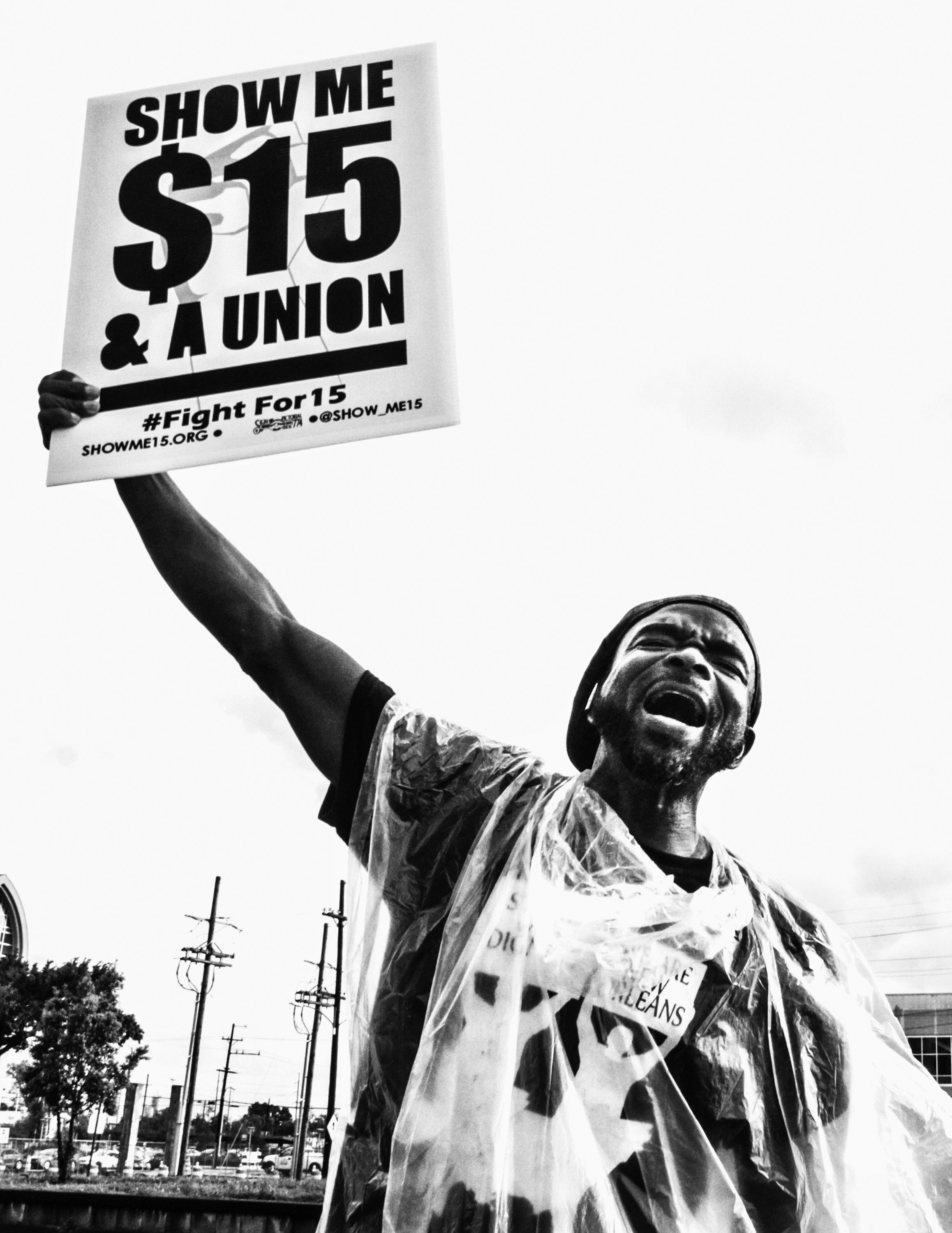 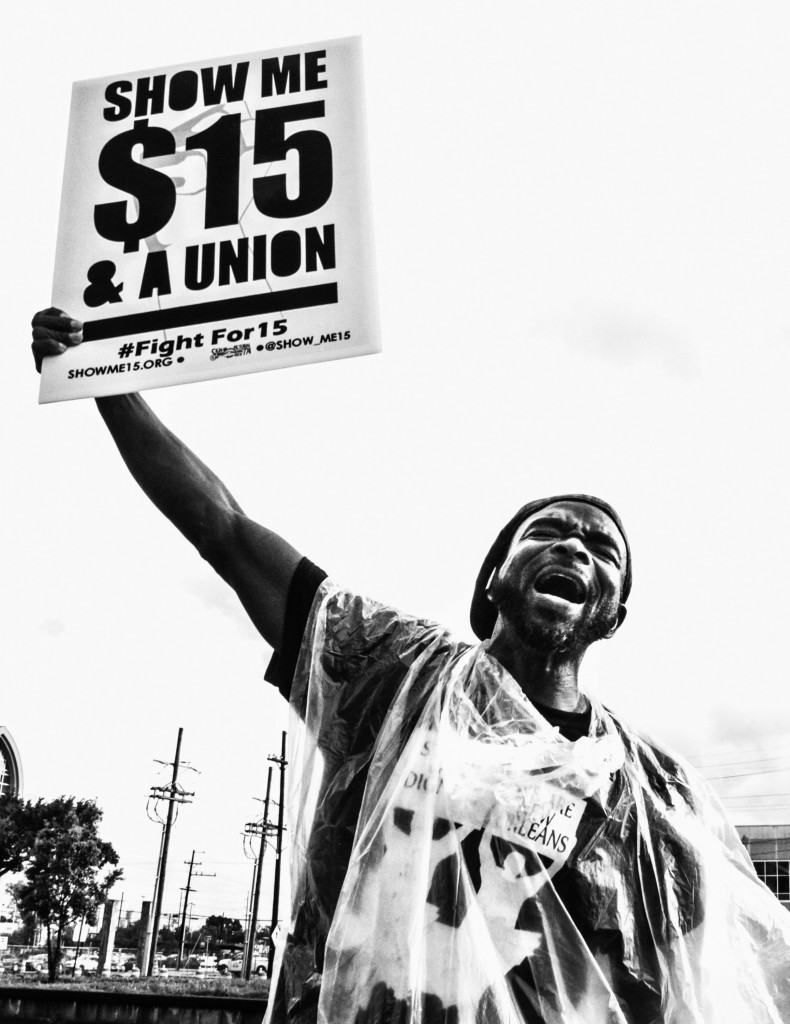 On April 15th, low-wage workers across the country went on strike to demand an increase of the minimum wage to $15 an hour and the right to unionize. This day of action was coordinated by Fight For $15, a national group whose field organizers supported local workers and organizations in orchestrating actions across the country. Fight For $15 has garnered international attention and participation since its initial action after Thanksgiving in 2012, when hundreds of fast food workers in New York went on strike for a minimum wage increase, seeing strikes and rallies in more than 200 cities in 35 countries across the world.

While the federal minimum wage has been set at $7.25 since 2009, 29 states and D.C. actually have higher state mandates. And while President Obama has encouraged an increase of the minimum wage to $10.10 an hour (before the Fight For $15 campaign started, President Obama was pushing for a $9 minimum wage), a 2012 study by the Center for Economic and Policy Research found that the minimum wage should actually be $10.52 if it had kept up with inflation, and $21.72 if it had kept up with increases in worker productivity. Because the current minimum wage of $7.25 too often does not translate into a living wage, many minimum and low wage-earning adults hold numerous jobs, are forced to seek public assistance, or alternative—often criminalized—forms of earning income to cover the costs of living for themselves and their kin.

David Bates, one of the local leaders of the Fight For $15, is a biracial 18 year-old diabetic, who is also a minimum wage worker at a McDonald’s in New Orleans. “It’s very hard to survive on $7.25 when medicine is so expensive. One of my entire paychecks a month goes to my medicine. A higher minimum wage means having money to put food in my mouth [and] make sure I’m healthy and pay my bills, instead of having to choose or be broke,” says Bates.

Frustrated with the corner his salary placed him in, David became a local organizer with the Fight For $15 and has been working to get other local minimum wage workers involved as well: “I help organize strikes and actions, I go to other stores and get people just like me involved. I became a lead organizer because I feel like this is something we need to fight for in order to survive.” Longtime New Orleans resident Louis Bryant agrees: “People can’t survive on the minimum wage now. I worked as a busboy for minimum wage in the early 1980s and at that time I was able to pay rent, eat, and survive. 20 to 25 years later, I see people trying to do this and it is impossible. The cost of living has gone up higher than the minimum wage and it just can’t happen. This is why the Fight For $15 is important. You’ll always have people working in these kinds of jobs. They are the kind of jobs that make the world go round, but that worker has to be able to make a living and pay [their] bills.”

Many Americans like David are forced to survive on the minimum wage (or less) due to being trapped by a host of interlinked social and economic factors. While some claim minimum wage jobs like fast food work are supposed to be temporary positions for demographics such as high school students, the reality is that roughly 52% of minimum wage workers in the United Stated are over the age of 25. Location, gender, race, and education levels are all also indicators of minimum wage employment in the U.S. Of the 1.3 million workers making minimum wage and the 1.7 million workers who earned less than the minimum wage in 2014, 62% of them were women, showing the feminization of minimum wage work, two thirds of which are service positions. According to the Bureau of Labor Statistics, Black people make up 20% of the fast food industry, despite being 12% of the population. In addition, nearly 40% of all Black women workers in the U.S are employed in low wage jobs. In cities like Chicago, over 40% of minimum wage workers are Black, though states in the the U.S South (primarily Arkansas, Mississippi, Louisiana, and Tennessee) see the highest percentages of workers statewide earning the minimum wage.

The disproportionately gendered and racialized demographics of minimum wage work, unsafe work conditions, and the need for the minimum wage to translate to a livable wage in the United States led thousands of people into the streets on April 15th for a day of action for livable wages and a union. New Orleans saw a full day of actions starting at 6 a.m. with a rally at the McDonald’s at Canal and North White Street. With over 100 striking workers in attendance, the first action of the day saw two workers walk off the job and join the strike. Later, the group made its way to Woodward Construction on South Jeff Davis in a solidarity action with Stand With Dignity, a local grass-roots organization of low-income residents and workers in New Orleans. After an impromptu occupation of another McDonald’s on Canal and O’Keefe Avenue, a few members of the Fight For $15 rally made their way to the Broad Street overpass to drop a banner that announced the Fight For $15 day of action in New Orleans. Organizers and workers ran into some police officers who detained us for approximately 45 minutes and threatened us with arrest for dropping the banner.

Though we remained calm and were eventually let go, nearly a dozen officers ended up on the scene with nearly as many cruisers and police SUVs surrounding us. Despite this attempt at intimidation, the day of action continued with a 3 p.m. rally at the Walmart on Tchoupitoulas, in solidarity with Organization United for Respect in Walmart (OUR Walmart), a group that organizes to ensure worker dignity and respect and supports workers in addressing workplace challenges at Walmart. The local workers were supported by striking workers from Baton Rouge, as well as Jackson and Greenville, Mississippi. Despite the tornado watch on the afternoon of the 15th, the day of action culminated with a rally, march, and speak-out from Xavier University, with approximately 300 people in attendance. The day ended with the occupation of the McDonald’s at South Carrollton and Edinburgh Street, with hundreds of chanting, striking workers, and supporters inside and outside the store making sure their voices would not go unheard for another day.

April 15th saw low and minimum wage workers, many of them of color, participate in and lead nationwide actions in the fight for economic justice. While the basic demands of the Fight For $15 campaign are clear—$15 and the right to unionize for minimum and low wage workers—the movement is about far more than an increased paycheck. The Fight For $15 movement challenges us to look critically at the racist and classist capitalist system we operate under, a system that values the penny over the person, simultaneously discouraging wage increases while shaming the people it has trapped in low wage labor and profiting off the criminalization of poverty. Most of all, the Fight For $15 campaign is about restoring human dignity to some of the hardest working Americans and supporting them as they raise their voices and organize against some of the largest, most powerful, and oppressive national and global corporations.

At the end of the last rally on the New Orleans day of action, I lingered inside the McDonald’s with a handful of striking workers who were talking to the people currently at work. The manager on site eventually took over and started a heated exchange with the strikers, while his employees looked on. One striking worker turned to the manager in frustration and sang to him a remixed version of the McDonald’s jingle, ending it by declaring loudly “I am NOT loving it!” With a grin on his face, the manager turned to his workers (who for the most part had looked to him for cues while we occupied the restaurant) and sang the first part to them, expecting them to finish the iconic jingle. The remaining striking workers and I left seconds later, smiling, after not one worker chimed in.

For more info on Fight For $15, check out fightfor15.org