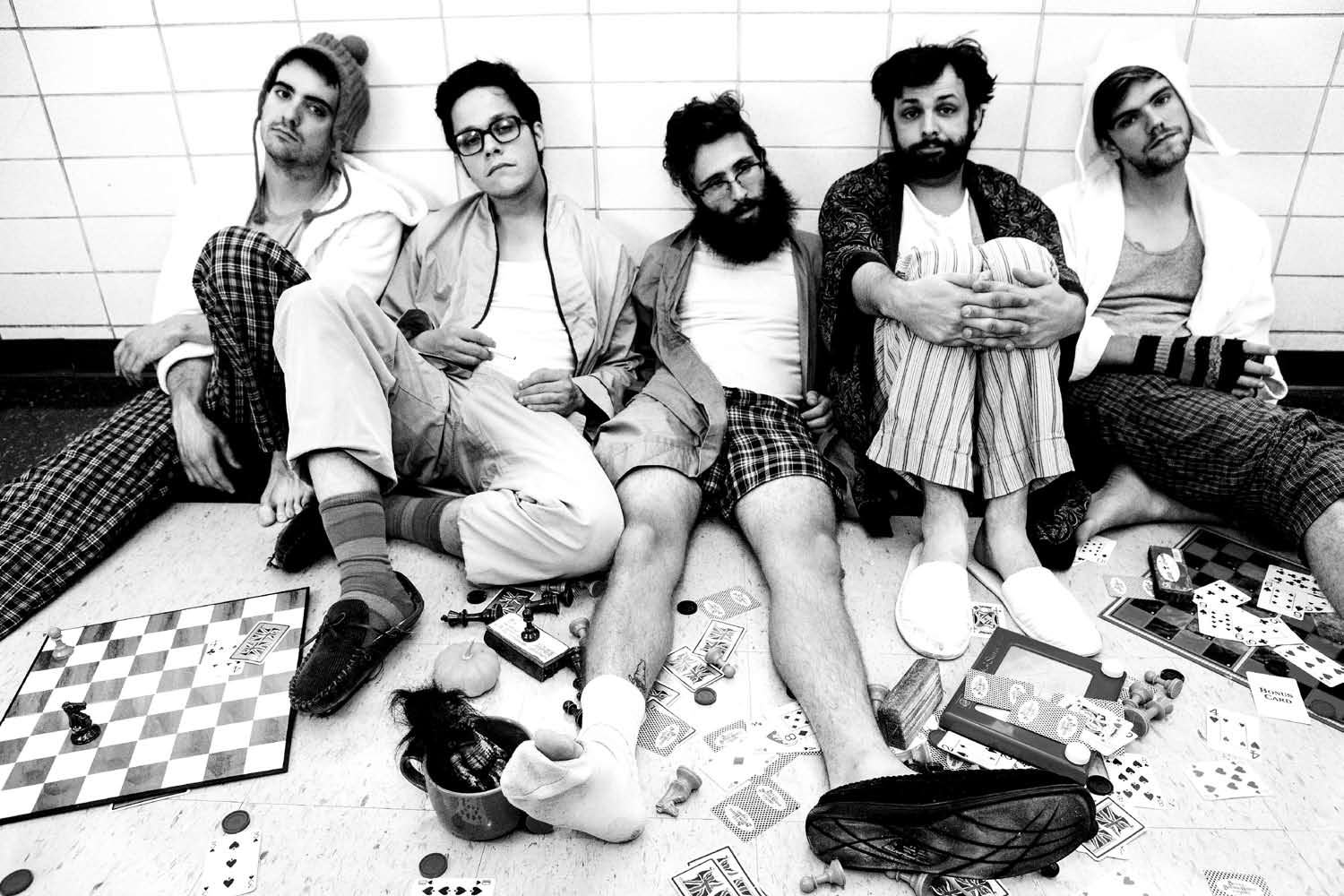 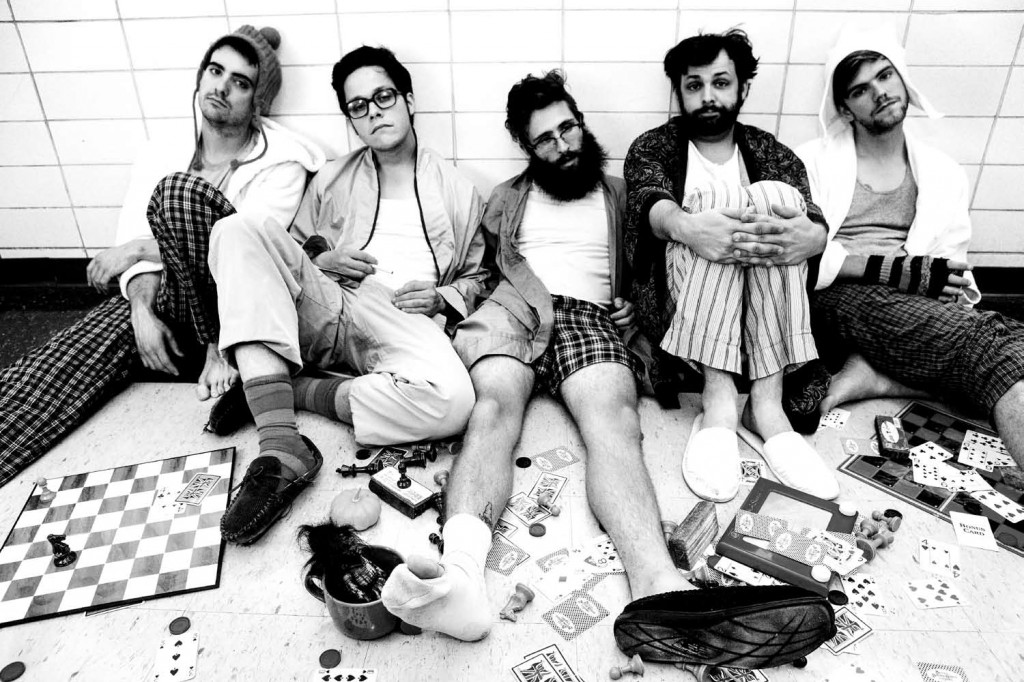 They’ve got heart. They’ve got brains. Now… they’ve got Courage, the debut LP of New Orleans-bred Vox and the Hound, released this month. After being fortunate enough to see a live preview at the Living Room Studios over the summer, I was anxious to talk to the boys and find out what it really took to create such a body of work. Vox and the Hound features Leo DeJesus (vocals, guitar, percussion), Rory Callais (guitar, vocals), Andrew Jarman (bass, percussion, vocals), Daniel “D-Ray” Ray (keys, trombone, melodica, percussion, vocals) and Eric Rogers (drums, percussion). I was invited over to D-Ray’s house and sat down with Vox and the Hound to talk over some personally made pizza.

How did Vox and the Hound become a band?
Leo DeJesus : After my old band, the City Life, ended, I was involved in bands as a side-guy; and I got the hankering to start writing songs that I would sing again. I started with the basics: stressfree songs I could sing by myself. Eric got me a gig with Blitzen Trapper, so the pressure was on to get some songs written. That grew into getting involved with Eric, sending him everything I’d been recording and writing. Then we landed a gig at Foburg Festival and had to put a band together. Eric and I had been involved in bands before; we knew we wanted to work with D-ray and we wanted to find people that we hadn’t really worked with before. I just knew Andrew’s name— didn’t know anything else. We forgot that Rory played guitar and that’s pretty much it. We put the band together for that one show and it worked, so we stuck with it.
Rory Callais: I forgot I played guitar too. I remember he asked me the night the Saints won the Superbowl. I said yes in the midst of the celebration.

If Vox were a movie, what movie would it be?
LD: [laughs] Back to the Future Part III is our stupid answer. The Good, the Bad and the Ugly is our pretentious answer.
RC: Old spaghetti westerns. 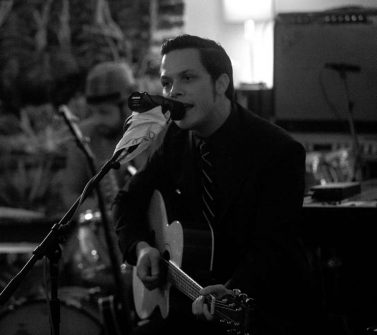 What’s a Spaghetti Western?
LD: Spaghetti westerns are westerns directed by Italian directors. The Good, the Bad and the Ugly/The Man with No Name trio is kind of the iconic spaghetti western trilogy. Ennio Morricone was the composer who created the iconic sound in those films. Quentin Tarantino features him in all of his movies anytime there is a western scene. As a stylistic influence, we went in that direction. I only listened to Ennio Morricone for two-and-a-half months before we went into the studio.
D-Ray: There are a lot of sounds that we used from that: the whistle, mouth harp, vibraslap—
LD: —Jaguar, surf guitar, chanting—
DR: These movies are all based around a character that is fighting for something.
LD: Basically, there is some stranger who shows up in town, doesn’t like the way someone is treating someone else and fights for the other person just because he has the balls to do it.

I’m really surprised the album is not called Spaghetti Westbank.
LD: That was a fantastic hashtag.
Andrew Jarman: Every time we are together we have new inside jokes.
LD: A lot of them came out of brainstorming names for the album. I was encouraging everything; if they had any idea, no matter how stupid, to put it up. One of the ones I loved the most was “Mojave Dessert.”

What are your personal favorite tracks off the album?
DR: “Mom’s Origami” because all the sounds on that song are amazing. The synthesizer and guitar sound like steel drums somehow. Also, the song starts as a climb and just gets biggebigger and bigger. It’s dark; it’s good.
AJ: I think I like the closer “Sweet Solanum.” It’s so much different than everything else we have on the album. It was written with Leo by himself and the way we appropriated it and played with it made me really like the way it came out. The sounds are much more classical on that one.
LD: The way that song came about was in 2007 I was asked to write a song for Jimbo Walsh where the orchestra would basically be my band; and to do it from the perspective of a zombie. At the time, it didn’t quite fit in any of the bands I was in but I really loved the song. From the very beginning of this band, I had a thought that this band would be where this song finally found a home. 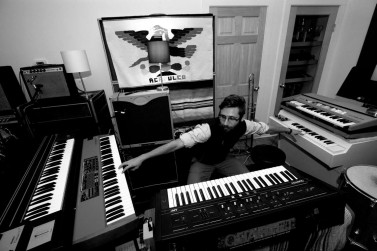 RC: I’ve always had a 2-way tie between the song D-Ray mentioned (“Mom’s Origami”) so I won’t get into that one; but my other one would probably be a song called, “Lucky Us.” It’s a big crescendo. Where it starts and where it ends are totally different; it doesn’t go where you think it’s going to go. All of our parts just really interlock and it was a good song to begin with. If Leo played it by himself, it would still be really good. D-Ray and I have this solo that really…
DR: Is probably the biggest part on the whole record.
RC: I call it “whale sex.”
LD: I really like what I guess is the “genre-bending” track on the album: “Fake It,” which is a little diddy that Andrew wrote. When we recorded it we just put 3 microphones in between us, went through it and got it on the first take. Every time I hear it, it just sounds like us having a blast.
Eric Rogers: I would say that my favorite is “Cheap and Out of Place” because it was somewhat of a surprise to me. Of all the songs on Courage, that’s the one we’ve been playing the longest… Even though it was the oldest song, somehow I hadn’t caught the lyrics until Leo was recording the vocal tracks.

How did you record Courage?
LD: We had the spreadsheet.
DR: Lifesaver.
LD: It’s a giant Excel spreadsheet. We wanted to plan out doing as much as we could live, so in order to figure that out we had to decide everything that was going to happen on each song and coordinate which songs were with which drumset… basically asked each person to fill out their own columns.
DR: There were a lot of sounds we weren’t sure how to pull off. We were hanging out in the back and [the Living Room Studio’s] Chris George had the idea to grab a filing cabinet and bang on it. He also built us a custom woodblock.
LD: Chris George went to his workshop and nailed 3 pieces of wood together and it worked. We wanted a specific woodblock… trying to find something that sounded like a woodpecker? Nail 3 pieces of wood together and you get that.
RC: A lot of times I was experimenting with different guitars, going through different amps and pedals, trying to find the right sounds. I had things I was bad about… things I wanted to do guitar-wise that I didn’t necessarily tell anybody…
AJ: For me though, I used the exact same setup the entire time. I didn’t change a thing; I would turn the tone knob up or down.
DR: Really? I used like 10 different keyboards…
RC: In his defense, he had a broken foot and couldn’t get up to go change anything.
LD: The broken foot really contributed to the sound. 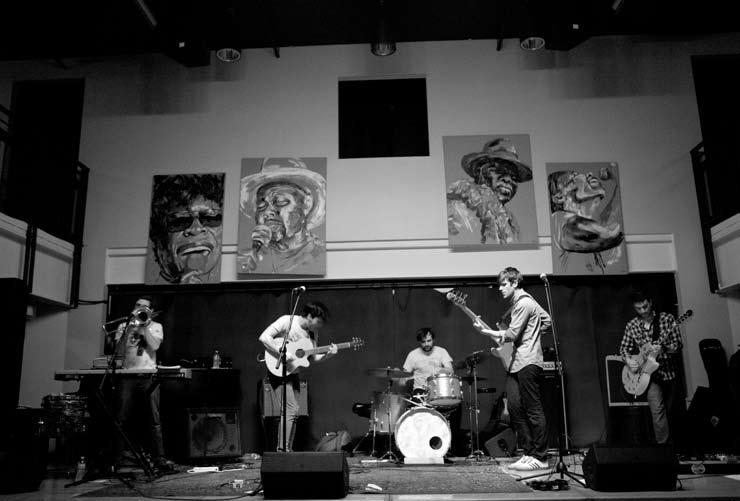 How did you manage to fund this album?
LD: First off, we made sure that we as a band had earned enough money to track the songs on our own. After that, recording the record put us back at zero, which left no money to actually make several copies for people to buy. We wanted to go beyond CDs this time. Besides D-Ray, none of us had ever been involved in a recording that was pressed to vinyl. We figured that the only way we could do it would be to try this Kickstarter thing out.

What was your goal originally?
LD: The goal was $2,500 and that was to press vinyl and make the CDs. That was the official goal but in the advertisement we said that if we reach $3,700 we will take these songs that didn’t have space on “Courage” and make a 7” EP, potentially named “Cowards.”
RC: We hit the $2,500 goal in three days and after 5 days we had reached $3,700. DR: We tried to make the different pledge rewards interesting. Besides the Living Room [preview] show, we had a “sushi & karoke” deal where we treated everyone to sushi and karoke.
RC: We had a $500 pledge that included all of the rewards, plus we would cover any song of your choosing. We expected maybe someone’s parents to take that one but ended up having 4 people pledge that.
LD: I think what created the best result was the Living Room show. We put on a private show for the people who pledged a certain amount. It was really intimate; they got to see us playing the record in the environment it was recorded. As it got closer, we booked the studio and with all the ideas we had and it just happened. I remember looking around an hour before the show, at the space we had created in the studio. We were all dressed in suits and I thought “at least no one could say we didn’t overdo this.”
LD: It was so rewarding for us because it felt like we were actually honoring those who rewarded us.
DR: We’re going to be releasing 3 videos from that show leading up to the release.
RC: The great part about that show is that we were able to have our friends who helped out on the album play live. LD: When we’ve made it is when we can do every show like that.

Vox and the Hound will debut Courage on Friday, November 30th at the House of Blues Parish Room. Sports & Leisure open. For more information, check out voxandthehound.com