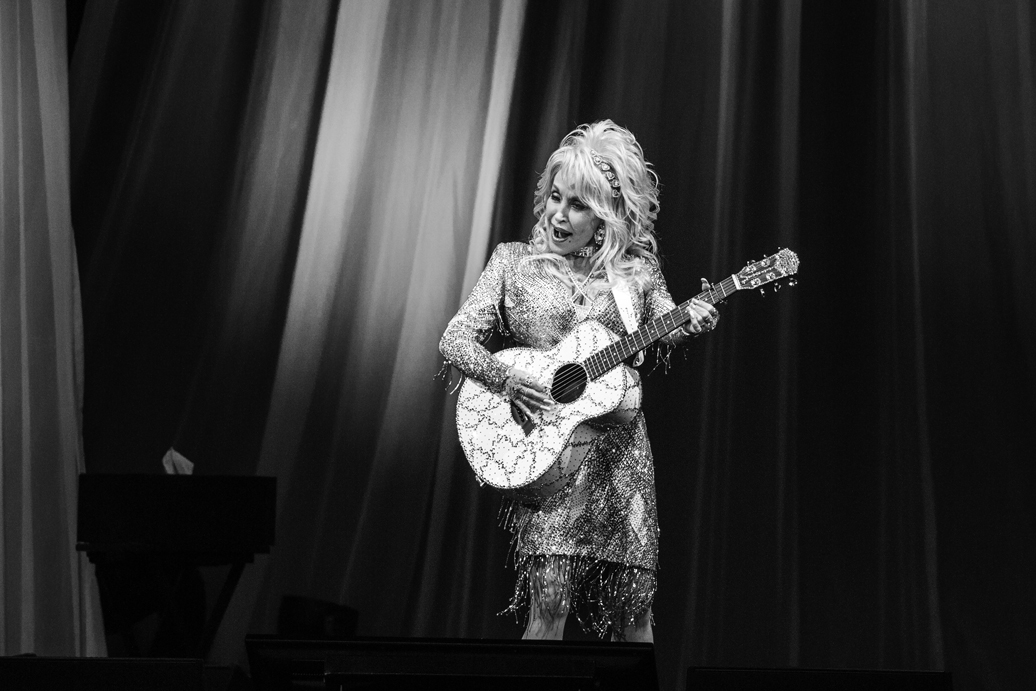 A problem retrieving my press pass sent me speed walking from the will-call booth to the back of the Smoothie King Center, where I found myself frantically showing my phone to the security staff guarding the loading dock area. Any time you produce an email or text on your phone that “proves something,” people will try their hardest to refuse to look at it, and this instance was no different. As I waited there, in a weird, stressful holding pattern, I was two flapping butcher shop-style doors away from Dolly Parton herself—a glowing orb of rhinestones, veneers, and poofy blonde hair surrounded by fans in the midst of a meet and greet. She later told a story on stage about how one half of a couple fell to his knee and proposed to his girlfriend during that meet and greet. (I was able to hear this from the audience because, as with most other tense situations in life, things just kinda smoothed out and fixed themselves in time.) Being stressed out makes anything and everything seem worse, but it’s impossible to feel stressed in the presence of Dolly, a person who has made such a name for herself since she began performing at the age of ten, that she is now a proposal destination.

Having a reputation for starting her shows right on time, if not a few ticks early, the house lights lowered the minute my butt hit the seat. Dolly’s outline appeared behind a gossamer screen while a sing-songy “Hello, Dolly,” warmed the speakers. After a bit of characteristic downhome chit-chat with the audience, she began the first half of her set with full-force A-game hits. “Why’d You Come In Here Lookin’ Like That,” recorded by Dolly in the shoulder-padded glory days of 1989, had the whole venue, old and young, clapping in time with abandon, or (in my case) doing so in their minds and hearts. And of course everyone was on their feet at the first hint of “Jolene,” her 1974 single about a pretty redhead who tried to steal her man, but failed—a fact she pointed out through giggles during the song’s intro.

Very few rules of life, gravity, or logic apply to Dolly at all.

There’s a widely known (but seldom admitted) fact about venue shows: they’re often uncomfortable, oddly boring, and seem to last a really long time. If you’ve ever been at a show, even for a band you LOVE, and found yourself wishing you were at home on the couch with headphones and a glass of wine instead, rather than stuck in the fart cloud of the row in front of you, then you know what I’m talking about. None of this applies to a Dolly show. Very few rules of life, gravity, or logic apply to Dolly at all. Within the first 20 minutes, I could feel myself emotionally dragging my heels, trying to slow time, hoping she’d play forever. No performer in the world compares to Dolly, and no one knows it better than her, a fact proven time and time again during her performance—bolded and highlighted during an instance where she immediately silenced a lone male heckler without skipping a beat, shooting back, “I thought I told you to wait in the truck!” We never heard from him again. 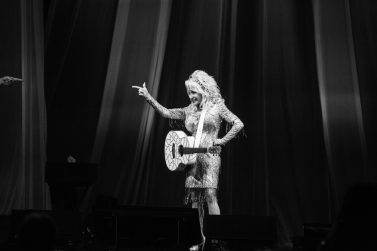 Mixing career-spanning hits, B-sides, and hay bale gospel tunes with a variety act of social commentary and comedy—in the form of a sexy cowboy assistant hauled around the stage from time to time, and a tiny saxophone that Dolly mimed playing as the setup for a joke bit—she was tireless in giving the crowd the best show she could. Admitting to having a head cold from traveling through too many different temperatures, she’d reach for a Kleenex from time to time and somehow even made that seem like a charming part of the show.

Before sending everyone out for a smoke break and a hunt for greasy snacks, Dolly led her band in a medley of “fight songs,” showing her anti-Trump cards to the audience, bravely, and maybe even surprisingly so, for a country girl. “American Pie” went into “If I Had a Hammer,” into “Blowin’ in the Wind,” ending with “The Night They Drove Old Dixie Down.” When we all came back together, her costume had changed but her energy hadn’t. She ripped through ten more songs and kept the crowd waiting for what everyone was hoping to hear: “9 to 5,” which she closed with, before quickly returning for an encore performance of “I Will Always Love You,” joking that many people mistake the hit for being a Whitney Houston original (due to Houston’s cover for The Bodyguard soundtrack in 1992). Dolly says she’s okay with it because she still gets to cash the checks for the rights.

This was my second time seeing her, the first being in Chicago about ten or so years ago, and I hope I get many, many, many more chances. 2016 was a kick in the dick kind of year and we lost more than our fair share of amazing artists. Dolly Parton, now into her 70s, won’t be around forever, but she’s very much here now. Let’s enjoy her while we have her.