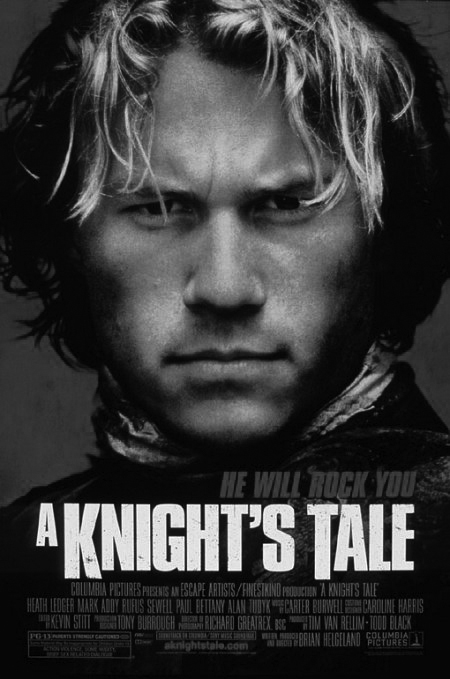 Most medievalists, myself included, basically take our fantasy nerdouts to academic levels. For me, it all started with 1990s and early 2000s knight movies, which are still, to this day, my movie equivalent of a weighted comforter. In these strange times, here’s a list of some of my favorite feel good, medieval movies and TV shows to drift away in.

A Knight’s Tale
Brian Helgeland’s 2001 film was hands-down my favorite movie growing up. It’s a Heath Ledger-led jousting rock opera. The film nods to Chaucer’s own tale of the same name, though the only real connection is the fact that a cheeky Paul Bettany plays the medieval bard alongside Ledger. (Hulu)

The King
If you haven’t seen Netflix’s The King (released this past fall), it’s definitely worth a watch just for Timothée Chalamet’s oh-so-luscious curls. The film is a mash up of Shakespeare’s Henry IVs and Henry V. Chalamet plays the legendary Henry V, who made major land gains against the French during his short lifetime. If you’re curious to learn more about the actual history post-viewing, listen to the podcast Rex Factor’s Henry V episode. (Netflix)

Merlin
While the graphics haven’t aged well and the budget certainly wasn’t that of Game of Thrones, the BBC’s 2008 TV show Merlin is a feel good, medieval romp about the friendship between Merlin (Colin Morgan) and King Arthur (Bradley James). Even just writing this description, I’m smiling. It’s just great. Also, the character development is far better than what the final season of GoT gave us. (Tubi / Vudu / Netflix)

The Favourite
Yorgos Lanthimos’s 2018 Oscar-nominated film is funny, strange, and more approachable than his other work. Check out Julie Miller’s article for Vanity Fair (“The Favourite: The Real-Life Power Struggle Between Queen Anne and Sarah Churchill”) about the real-life power struggle between the two women closest to Queen Anne (Coleman). Poor Anne it seems had a very hard life. (Hulu / HBO Now)

Shakespeare in Love
If you’re feeling down in any which way, Tom Stoppard wrote a movie for you in 1998 called Shakespeare in Love. As an actor and a rom-com lover, watching a young, sexy Shakespeare (Joseph Fiennes) gallivanting around the Elizabethan stage is my favorite pastime. Beyond a tight-clad Fiennes, the movie is chock full of references to Romeo and Juliet and other Shakespeare characters. It’s basically a rom-com with highbrow lit references that everyone can get. (Hulu)