Sinking City Records is the love child of two WWOZ DJs: Scott Borne and Brice White (a.k.a. Brice Nice). As White explains, the label’s roots stem from the duo feeling certain things they loved were neglected on vinyl and in the press. To them, Sinking City’s focus is diverse, yet simple. “We’re just trying to give voice to these things that already exist that maybe don’t get the type of traditional music press in New Orleans,” says White.

Sinking City’s recent output has included everything from AF THE NAYSAYER’s electronic production (PARTS, Act I) to experimental Cajun via Michot’s Melody Makers. To date, the label has put out 17 releases, eight of which have come out in the past year.

For one of these recent releases, the duo revisited old school bounce rapper Ricky B’s “Shake It Fo Ya Hood,” pressing the street and clean versions on a 7”. “There’s definitely a debate about which version people like the most,” says White. In 2013, the tune drove the success of the label’s first release, B Is For Bounce, a compilation of Ricky B’s 1990s recordings.

“I’m not trying to do anything on a smaller scale than anybody. That’s just where I’m starting,” says Special Man Industries founder Jimmy Horn—better known as King James—in reference to New Orleans giants like Dave Bartholomew and Allen Toussaint. At one point, he adds “I’m trying to do more than those guys did.”

For Horn, running his own record label has largely been a means to have maximum control over his work. “I don’t take direction very well. I’m not very flexible. I don’t like doing what I’m told,” he says, “So doing everything my way is very gratifying in that sense. It might be construed as an arrogance, but it really is just investing in myself… I’m not waiting for other people to validate what I’m doing.”

“What is the definition of the word album? It’s a collection of singles”

After feeling frustrated about restricting his songwriting to himself and his limited musical abilities, Horn began searching for a more rewarding creative process. “I had to say, ‘Man, let me take this yoke off of just writing for my dumb ass. Let me just write from my heart, come what may. And if I need to find another singer, I will,’” explains Horn. “That was the beginning of the label.”

“Don’t Tell Me That It’s Over,” a soulful tune featuring Alynda Segarra of Hurray for the Riff Raff, was the first collaboration to bear fruit. “She crushed it,” reflects Horn. “That led to other artists being willing to work with me after hearing that one.” Collaborative singles with Leyla McCalla and Louis Michot have since followed, using the Special Men as the label’s house band.

While all of these recent songs are united under Special Man Industries, Horn isn’t worried about creating a consistent sound. “If I’ve got this Alynda song, I would do myself and her and that record no justice if I just found the closest thing that sounded sort of like that and put it on the b-side,” he says.

“We’ve got this kind of broken-hearted love song and then we have this transcendental, psychedelic noise bit on the other side,” he explains. In a similar fashion, Louis Michot’s Cajun waltz is backed by a solo blues number. Leyla McCalla’s rendition of the standard “Eh La Bas” is followed by a brass band version from the Special Men.

Horn expresses displeasure over the press categorizing these recent releases as simply a series of singles. “That’s my business motto.” he retorts. “Look at Cardi B or Kodak Black or whoever else is actually selling records right now. They’re not worried about albums.”

“What is the definition of the word album? It’s a collection of singles,” he adds. “If you’ve got a concept album, let’s make an album. But if you’ve just got an album i.e. a collection of fucking singles, let’s put out a single, bro.”

This conservative attitude makes sense given the high cost of manufacturing vinyl releases. The cost difference between putting out an album on a 12” or a single on a 7” can be staggering. 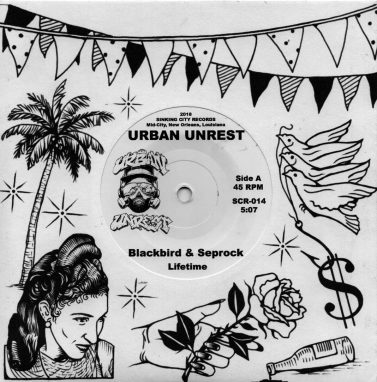 White and Borne approach Sinking City in a similar manner. Many of their 7”s feature songs culled from larger projects. “The vinyl format is sort of limiting in a way that I actually like,” says White. “You have to either find two songs that are under five-ish minutes or two sides that are under 18 minutes a side. In my opinion, it makes you pick your favorite cuts or a certain quality of material to fit on that.”

Sinking City releases are also an attempt at historic preservation. White says he encountered “Better Late,” by local hip-hop artist Cam, through an Instagram video. White was stunned that he had never heard of her work and quickly fell in love with the tune. Soon after, Sinking City reached out to Cam about preserving “Better Late” and another song from her EP on vinyl. “The idea of the digital life [is] that everything lives forever. At the same time, things just disappear and you don’t know where they went,” says White.

For local labels like Sinking City and Special Man Industries, New Orleans Record Press has been a welcome addition to the city since it opened in 2017. The record press is the first and only one of its kind in New Orleans. “It’s a new day in music business in New Orleans. That’s for sure. You can press your records right on Montegut Street,” says Horn. Special Man Industries began with a 12” made at the press in 2017.

Starting a record press is not cheap. As a result of the hefty investment required to get it up and running, New Orleans Record Press originally skipped equipment necessary to make 7”s, in favor of only producing LPs. As a result, White and Horn were forced to look out of town for their 7”s.

“The fact that they couldn’t press 45s was frustrating to us because I didn’t want to have to send off to someplace that I didn’t really want to deal with anymore,” says White. He recalls that records took anywhere from three to eight months to be completed at out-of-town presses.

Hoping to put more power into the local music economy and leave the frustrations of distant presses behind them, White and Borne reached a deal with New Orleans Record Press. The duo helped acquire the necessary equipment to allow the press to make 7”s. With the exception of Paco Troxclair’s “Duffy,” all of the label’s 7”s from the past year were made there. In addition to shortening the production period, making records locally helps labels save large sums required to ship heavy packages to New Orleans. Now that it is finally possible, Horn says he also plans to use the local record press for Special Man Industries’ future 7”s. 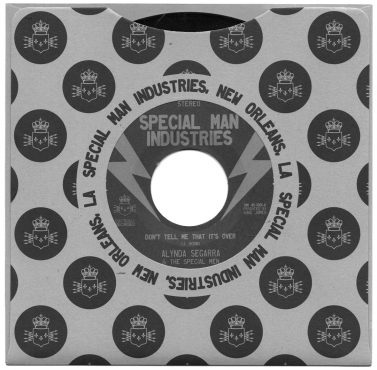 “There’s so many talented musicians [in New Orleans] but sometimes we felt like packaging jobs, artwork, pressing quality, the fact that people only put out CDs and not records—those were things that weren’t contributing to the success of a local music economy,” says White. Sinking City appears to address these problems directly by using local resources when possible. For instance, local tattoo artist Pauly Lingerfelt designed the sleeves that appear on current releases from Sinking City’s sub-label, Urban Unrest.

“We fundamentally believe that the canon of New Orleans music is vast and it doesn’t have to be restricted,” says White in reference to Sinking City. “Once a label earns your trust, then you’ll follow them in directions that you might not have otherwise gone. I think that’s our goal, but really centering it here in New Orleans,” says White of the label’s aspirations.

When asked about collaborators he’d like to work with in the future, Horn lists Erykah Badu, Rihanna, SZA, and D’Angelo. But as he adds, “I’m already here working with the greatest musicians New Orleans has to offer.”