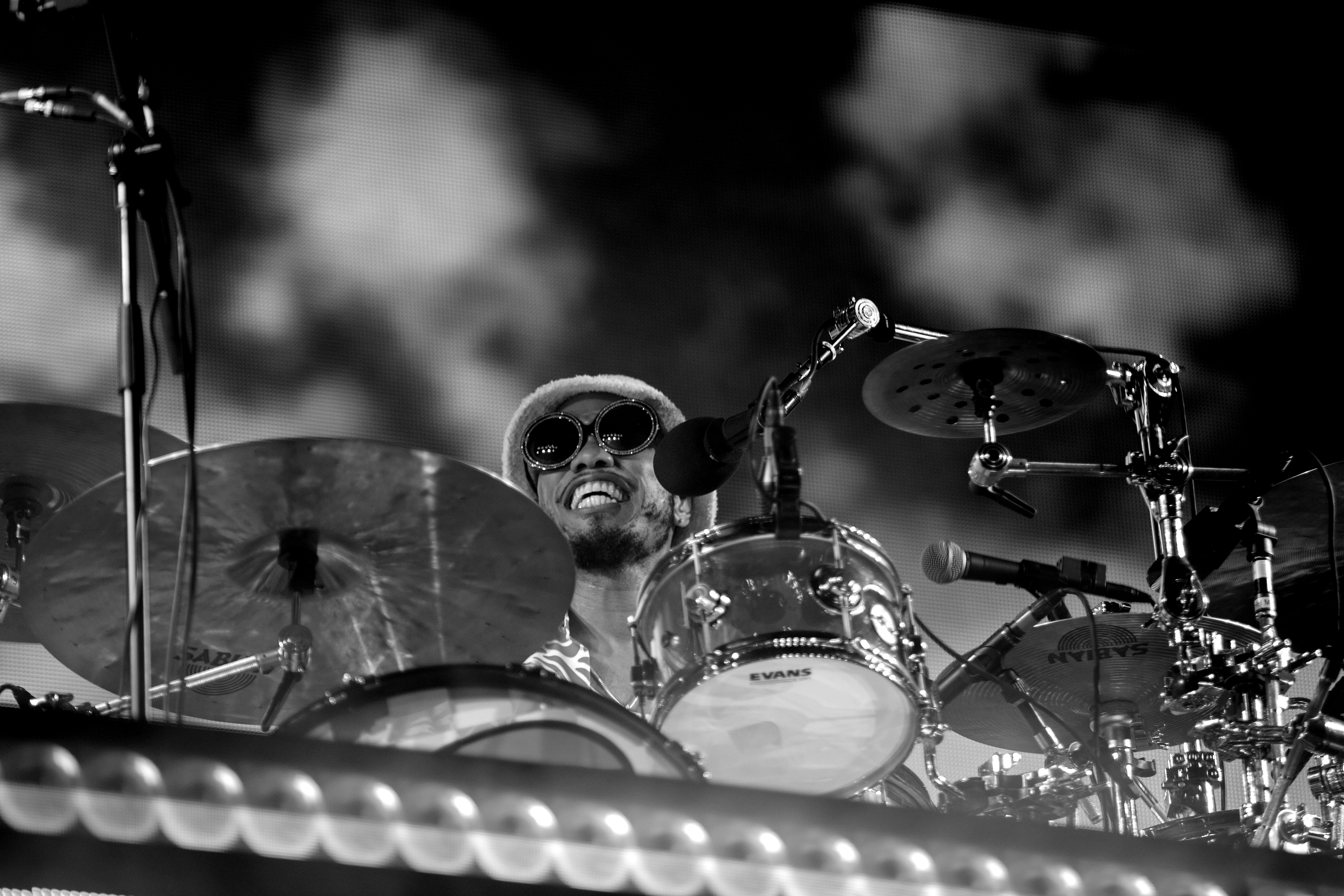 As the sun beat down on the crowd at Champions Square, Stephen Lee Bruner—better known as Thundercat—kicked off the show by forcing his band to navigate death-defying musical acrobatics. Scorching instrumental opener “Uh Uh” was a combination of million-mile-an-hour bass, sharp drums, and pounding keys. Thundercat immediately showed the audience why he is such a highly sought-after collaborator for the likes of Kendrick Lamar and Mac Miller. He mixes top tier musicianship with a keen sense of humor—as in, following “Uh Uh” with two different songs about his cat Tron, one of which was dominated by frequent meows.

The bassist’s 2017 album Drunk was his best executed solo work to date. While the seven-song set leaned heavily on material from that album, the way he approached the songs in his live set was altogether different. Instead of trying to mimic his stiff studio arrangements, Thundercat favored a nonstop fiery exchange of shredding jazz fusion solos from all parties, like a modern day heir to George Duke, tiptoeing the line between heady jams and popular music.

Because longtime drummer Justin Brown had other commitments, Thundercat and keyboardist Dennis Hamm were forced to look elsewhere to round out the band for the night’s set. They recruited teenage prodigies JD Beck on drums and DOMi on keys to create a special quartet for one night only. The young duo did a remarkable job of navigating the shred-heavy compositions; it’s astonishing that it was their first time performing these tunes. Impressed by the 16-year-old drummer and 19-year-old keyboardist, Thundercat reminisced about his primary activities at that age: eating junk food and jerking off.

On “Friend Zone” and “Heartbreaks + Setbacks,” Thundercat detailed the struggles of his love life. During “Friend Zone,” he shouted out his love of Mortal Kombat and boasted, “I’m better off alone,” while jerking his hand in a lewd gesture. For his final tune, he gave the audience what they had been waiting for. His big hit, “Them Changes,” was a masterful mixture of groove, shredding, and pop sensibility.

As the bright day finally transformed into night, Noname’s arrival on stage was met with cheers. The rapper, bearing a red plastic cup, started her set with Room 25 opener “Self.” On the boisterous track, she noted “Y’all still thought a bitch couldn’t rap huh? Maybe this your answer for that,” setting the tone for her set.

Over smooth soul grooves, Noname conjured wordplay-heavy rhymes with ease, but her tunes are more than just lyrical workouts. She is a poet who sculpts deeply personal, yet topical work—much like Gil Scott-Heron did in the 1970s. On “Prayer Song,” she juxtaposed a Black woman living in America in the first verse with a police officer shooting a Black woman in the second verse. Less than a week and a half after Governor John Bel Edwards signed off on strict abortion restrictions for Lousiana, Noname rapped about abortion as an act of self-love on “Bye Bye Baby.”

Like Gil Scott-Heron, Noname’s early ventures into lyricism were as a spoken word performer. She occasionally returned to those roots by indulging in a capella breakdowns during her set. These moments emphasized the intricate elements of her under-recognized wordplay and proved that Noname is first and foremost a poet.

Noname closed her set with “Shadow Man,” the last song off of her 2016 debut mixtape Telephone. On it, she described her own funeral. Three years after she first released the song, though, the young rapper’s future continues to look bright.

Blazing bursts of pyro and a barrage of flashing lights assaulted the senses as .Paak’s backing band, the Free Nationals, began the first tune, “Heart Don’t Stand a Chance,” the singer still nowhere to be seen. Slowly, .Paak materialized as a drum set rose up from the depths of the band’s two-story stage. The crowd was enthralled. Their hero had finally arrived.

While most frontmen might seem awkwardly immobilized behind a drum kit, .Paak ruled the stage from his throne as he belted out the opening song. Playing drums and singing is not an easy task, nor is making it look cool. but somehow .Paak maintained his charisma. His bright white grin shone underneath his bucket hat and a pair of big, round shades. This tour is clearly named “The Best Teef in the Game Tour” for a reason.

As the set unfolded, .Paak rarely stayed still for long. He frequently bounced from drums to dancing across the stage, surrounding himself with the type of excessive big screen visuals, choreographed pyro, and rapid lights that we’ve come to crave in a pop showcase.

Although things had cooled down considerably with the setting of the blazing sun, Champions Square was an ocean of sweat. .Paak—himself drenched from his athletic performance—graciously thanked the audience at one point for bearing the heat to see him. “It’s hot, goddamnit!,” he shouted later in the night.

.Paak’s star status didn’t keep him from getting topical. The singer packed a lot into the soulful number “King James.” He sang about Trump’s wall, gentrification, and saluted Colin Kaepernick and Lebron James for their efforts towards justice and equality. “King James” was the only song with its lyrics blown up on the video screen, implying that .Paak wanted the crowd to take this message home with them. Messages like “They can’t gentrify the hearts of kings” hung heavy over a city where residents have seen their lives change quite a bit in recent years. If New Orleans wasn’t grasping the message before, local trumpeter Brown’s short yet powerful solo probably helped embed it in their memories.

While .Paak seemed like a king on his throne—seated at a drum kit far above the crowd’s heads—he was also a man of the people. During one song, he leapt down from the stage and into the audience to much fanfare. He sang and danced his way through the crowd, making it all the way to the back of Champions Square.