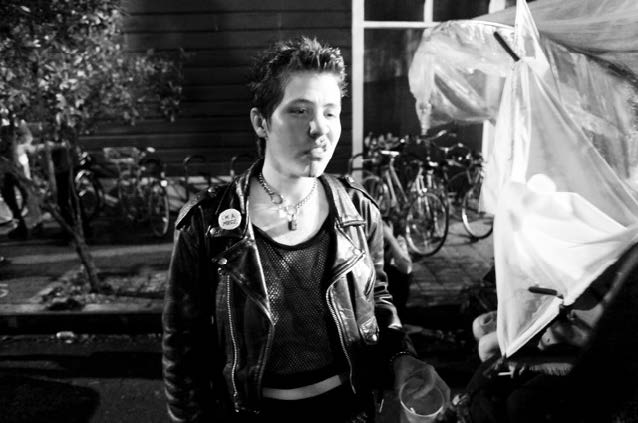 In her book Bird By Bird, Anne Lamott describes writing “presents” to loved ones. And although her recipients included a father dying of cancer and a terminally ill friend, and mine is only going as far as Chicago, I want to offer my own present. Because, too often, we don’t celebrate our friends enough while they’re still in our midst.

To begin I must go back to one winter night, to a show at the Dragon’s Den. Maddie Ruthless had booked some ska bands and, naturally, I was tabling it on behalf of the Iron Rail Book Collective. Mind you, this was during a period where I prided myself on being a one- man tabling machine, a campaign I undertook with the antisocial zeal of the Unabomber. I was also gnawingly insecure and fresh out of high school, struggling to carve out some kind of identity for myself. So you can imagine the sulking fit I threw when another group showed up at the door carrying their own crate of Iron Rail books. Picture Ted rushing from his cabin to shake his fist at the airplanes, and the depiction is roughly equivalent.

Amongst the offending party was Travis and Tiara, plus a third I didn’t recognize. This stranger wore high waisted jeans, combat boots, and a jean jacket adorned with a huge Necros back patch. (Or was it Negative Approach?) In any case, I’d seen enough. Some johnny-come-lately, I thought dismissively, traipsing in on the wind, and stumbling out of town with the rest of the drunks as soon as winter’s over.

“Hi, I’m Candice,” she said, as they began setting up their books next to mine. To which I yanked up my hood and turned away. She would tell me later that I behaved like the biggest jerk ever. And that could have been the end of it. But she’d heard I was vegan and wanted to make an effort to be my friend.

My fortress finally crumbled when I found out she was also vegan. It turned out she’d been involved in activism in Flagstaff (where she’d lived before NOLA) and that we actually attended the same animal rights conference in Portland earlier that summer. While I was engrossed in a talk by someone who’d gone to prison for freeing mink from a fur farm, Candice had been across the hall, at a presentation by celebrity cookbook author Isa Chandra Moskowitz.

We soon became inseparable. Only there was one problem: In the realm of subcultural aesthetics, no two people could be farther from each other. The mosh-heavy ‘90s bands like Earth Crisis that spoke to the deepest core of my being, she refused to even call “hardcore.” And the ‘80s punk for which she so fervently reserved this demarcation, I found antiquated and obnoxious. We bickered a lot. My god did we bicker. Put it this way: my litmus test when encountering any punk music is still, “Would Candice like this?” If signs indicate the affirmative, that’s it. Dealbreaker.

Though there were a couple notable exceptions, Fiona Apple being one. The Evens another. And of course, The Smiths. But even this latter band could be contentious, as I much preferred solo Morrissey—an opinion which often stirred debate. But slowly, tentatively, we started dipping our toes into each other’s musical ponds. I played her Requiem, and she didn’t scoff. Actually, it reminded her of the epic crust bands she used to listen to back in Flagstaff, she said. Kind of like her old band Critical Massacre. She played me their demo, and I was impressed. “Oh, if you like this,” she said, pulling up her iTunes, “you gotta hear Garmonbozia!” 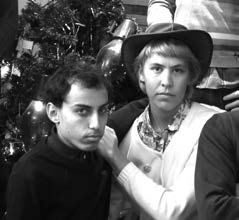 One thing led to another, and she presented her favorite band of the moment: The Vicious, from Sweden. I gazed at the red LP in my lap as if it was the slimy orb of some studded cigarette-smoking punk’s loogie. But when the jangly guitar sounded from the speakers, something miraculous happened. I found myself actually enjoying it!

I should mention that, because I was living in a warehouse with no heat, my drafty room partitioned off by sheets, our center of operations was usually Candice’s bedroom at the back of her house on Gallier Street. Even though Candice and I (and let’s not forget her little furball of a cat, Dixie) would eventually end up living together, sharing countless hours and tribulations under the roof of Nowe Miasto, I still look back on Gallier Street as the “golden days” of our friendship. Not least of which because her dad, Charles, could usually be found slouching real low on the couch in the living room, midway through some reverbed-out jazz-guitar jam session from a little practice amp. While Candice prepared chocolate chip cookies in the kitchen—she knew the recipe by heart, and insisted I would only get in the way if I tried to assist—Charles would often talk to me about life, politics, or whatever was on his mind. Candice and her dad were very close. And through him I learned a little more of the Metrailer chronology. How Candice had been born in Baton Rouge, before moving to Arizona; and how Charles and Candice’s mom once upon a time owned a video rental store, where Candice worked during adolescence. Charles passed away last winter, and it saddens me to think he won’t be able to read this. But if he were here, I like to think he’d be proud to see his daughter continuing to pursue her dreams of playing music and touring and, you know, just being punk as fuck. It seems only right that Candice now possesses Charles’ guitars.

On nights we weren’t tabling a show, Candice and I would ride bikes Uptown to hit the supermarket dumpster circuit, one of my hobbies at the time and where I ate the bulk of my diet. While I rummaged in one corner, tossing boxes of produce over my shoulder in search of real treasures, like soy yogurt, Candice would gather up my discards. Back at homebase, she’d reach into the bags and hold up the various pieces of organic matter. This—this is what’s called a turnip. And this here is kale. Following which she’d take a knife to each, throw them into a cast iron, and proceed to transform these foreign objects into a dazzling feast before my very eyes! Where she failed to broaden my horizons in music, she certainly succeeded in cooking!

Across the street was Elizabeth’s, where Candice would often have to interrupt our hang outs to go wait tables. She complained to me endlessly about how much she hated that job—carrying plates heaped with the abused flesh we call “food,” the obnoxious customers. But instead of commiserating as any friend would—or better yet, pulling the fire alarm, so we could go spend the afternoon enjoying the waterfront or something—I’m ashamed to admit I did the opposite. I gave her a bit of a hard time about it. Like, if you hate it so much there, then quit, I’d say. Be like me: a militantly unemployed vegan soldier. I was more privileged, she’d retort. “Nonsense!” I’d cry, shielding from view that new car my parents had bought me and were paying the insurance on.

Privileged? Perhaps. Naive—definitely. No more evident was the extent of my hypocrisy and the depth of my ignominy than in the scenario of the Macbeth sneakers. God, this one’s gonna makeme look real bad. But I’m going to tell it anyway—for you, Candice.

So I had these all-black Macbeth sneakers my mom had bought me when I was still living at home. Clunky little things. They never quite did it for me, but I held on to them out of guilt. Candice one day noticed them collecting cobwebs in a corner of my room and asked if she could have them. Actually, she offered me 20 whole dollars for them, bless her heart. Now I’m pretty sure one was worn down almost to the insole from skateboarding. But did this matter to me? More importantly, wasn’t I hesitant to treat my friend like a customer—a friend who’d shown me generosity all those frigid nights she’d allowed me to share her heated room? How about the drudgery necessary for my friend to procure this capital—did this even cross my mind? No. All I was thinking about was my own refusal to sell my labor and the $200 rent due at the end of the month. I took her $20 and parted with the shoes.

But it gets worse. One day a week later, we were in her room, when Candice’s mouth twisted at the corner like it does, and she said, “Umm, I realized those Macbeths are a little too small. They hurt my feet.”

“Well, I dunno, Candice. I mean, you tried them on before you got them from me…”

She snorted. “Umm… Okaaay…” she said, her voice rising in pitch on the last syllable. “Well, here. You can have them back anyway,” she said, handing them to me. “I’m not going to wear them.”
I’m not sure what came over me. Certainly greed played a factor, or at least the perceived fear of scarcity. But part of me suspects some more insidious expression of disapproval— perhaps even reprimand—towards my friend for what I saw as wanton spending habits. Like mainstream vegan culture, this was my own way of “guilting the consumer.” As in, you could be free—if you didn’t spend so much. Whatever the case, it was wack. To my measly credit, I eventually did give her $20 back and apologized for being a total twerp. Like a year later. Sorry Candice!

Despite all my character flaws, Candice was and remains the only person outside my immediate family who has consistently made a point to commemorate my birthday. On my 19th, she threw a surprise party in the backyard of Nowe, complete with a banner, food, and The Strokes playing on the stereo. My 21st, she helped me screen Born In Flames, that cool feminist movie, on the roof of Nowe, only to have the VCR destroy Osa’s tape. On my 24th, she and my other very dear friend Michael Moises sent me a video of them performing a Fiona song—one of the best birthday gifts anyone has ever given me!

It’s like Confucius said: we can attain wisdom through reflection, which is noblest; or through experience, which is bitterest. The irony of my preconceived judgments about Candice, paired with the fact that she went on to contribute much more to the New Orleans DIY punk scene than most—myself certainly included—isn’t lost on me. Nor should it be for anyone reading.

Candice, I hope you find everything you’re looking for—as well as things you can’t even imagine now!—waiting for you in Chicago. And if you end up going for only a little while, that’s cool, too. I know many will be stoked to have you back.

Most of all, thank you for being my friend all these years. Even though I’ve been a little shit.