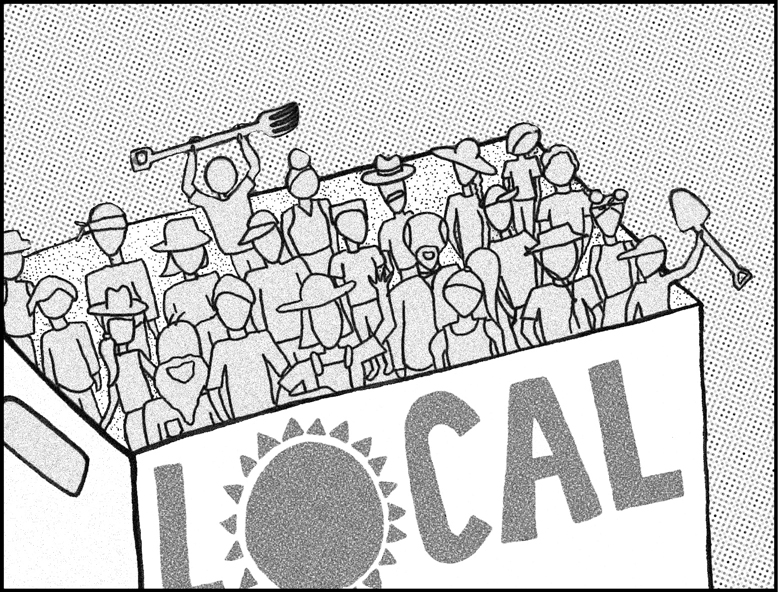 Nobody gets rich growing food. Historically, farming has instead been the crippled back of the masses upon which the wealth of an elite minority is piled. Wealth basically exists because of the agricultural revolution, but that wealth doesn’t trickle into the hands that meddle in the dirt. Folks like me who try to grow food for a living, whatever our reasons, certainly aren’t in it for the monetary returns.

Thankfully, over the last half-century in the United States, as subsistence farming has fallen blessedly out of favor as the primary endeavor of every citizen, steps have been made to make farming a viable career choice. These steps are vis-a-vis farm bills that subsidize food costs from the top; and from the bottom, community supported agriculture, or CSAs.

Coming into form some time in the 1980s, CSAs worked through subscriptions, wherein community members would pay a farm at the beginning of the season for a regularly doled out share of the crops grown by that farm every week or so. This initial influx of money gave the farmer a much-needed cushion of financial support at the beginning of the growing season to invest in all the seeds, soil, nutrients, and so on that add up early in the growing process. It also provided those who bought into the CSA with a dependable source of locally grown food from a trusted source. Essentially, CSAs made it possible to make a reasonable living as a small scale farmer, and gave socially conscious consumers a means to buy into a product that they could have faith in during an era before conscious consumerism was literally available at our fingertips.

Today, traditional CSAs are in decline and conscious consumerism has become a late-capitalist buzzword philosophy rife with dubious claims and consistently redefined labels. We are living in a Westernized present that is more food conscious than ever, yet wavers on its principles by way of its wallet. This trend extends way beyond food; there is an infinitely surfable wave of articles online bemoaning the loss of small businesses on main street, speaking to the fact that despite our ever increasing desire for the aesthetic of walk-along boutique promenades, we still spend all of our money buying things on Amazon. But food is at the heart of it, because food is at the heart of everything.

We are living in an era of eat local, eat sustainable, eat conscious, eat peta2, but we are not supporting our farmers. Akin to those local boutique avenues, farmers markets are on the decline nationally, and certainly locally. We have new markets popping up all the time, and Crescent City Farmers Market is holding strong. People still love to be at the market, to peruse the market, to engage in their community at the market. But they do not love to buy produce at the market. I cannot attest to this scientifically, but I can certainly attest to it anecdotally. Just ask a farmer!

The concept of farmers markets is also being commodified and falsified. A friend of mine was telling me a few weeks ago about a fake farmers market he came upon somewhere in south Louisiana that he excitedly stopped at to grab some local strawberries— during the peak of our renowned local strawberry season—only to find that the displayed berries were shipped in from California.

Similarly, CSAs in the traditional sense have a sullied name and are not reaping the rewards for farmers they once promised. There are many new models of (sometimes) local food distribution that fly under the flag of CSA. Most of these are run by organizations that aggregate food from many farms and producers of value-added products, such as locally sourced coffee, honey, or hummus. While this is unquestionably advantageous to the average consumer, it is not often so for the farmer. The food aggregator needs their cut of the profit, so the farmer must sell their product for less in most cases. And they are not able to sell all of their crops, as they may be able to through a traditional CSA, since the aggregator is picking and choosing between a multitude of growers, again usually locally as well as nationally, to create a bountiful and diverse collection of food for the consumer.

I’m not trying to be a luddite about this. The reality is that innovations are inevitable and this new model is the natural evolution of the CSA. My gripe is with the false branding of the CSA, and not so much that it is semantically a perversion of the original definition, but because of all the other misleading marketing that follows behind this initial truth bending. To be sure, there are many CSAs in this fair city and every other that aggregate local products fairly and meaningfully and are transparent in the branding of their product. The true and proper CSA model is also not completely dead. There are many local farmers and flower growers who use a CSA model to great effect. And again, plenty of food distributors use models similar to CSAs that are extremely beneficial to local growers. But there is a powerful shadow side to this local market, filled with companies and organizations using all the same words, ideas, images, and branding as the true promulgators of local food economies to sell unsustainable, non-local product.

My gripe is with these truly false food aggregators that target the socially conscious consumer, who doesn’t necessarily have the time to research the ins and outs of what they’re buying into. The issue is with the manipulation of socially conscious consumers by savvy marketeers who are actively destroying local food economies with their false, not-quite claims and suggestive nods to local food system support.

If local food economies and innovative ways of growing food and getting it to the common eater are swallowed whole by double speak, we may be living in a world where all that is just and true in food is swallowed up by the idea of itself wrapped in plastic and classy sans serif font. We already live in a world where organic doesn’t mean organic, when local doesn’t mean local anymore. It’s not a hard gap to bridge to the other side where food doesn’t mean food anymore.

These days, finding a good CSA takes a little bit of legwork, as most farmers don’t have the force of marketing machines behind them. If you want to support farmers and local food, start by going to Hollygrove Market and Farm, The Crescent City Farmers Market, or the ReFresh Farmers’ Market. Between these three places alone, there is someplace open every day of the week for you to start earnestly exploring the local food economy, and you can find food growers at these locations selling honest local product that in many cases have a subscription program you can join. If they don’t, they probably want to and just don’t know anybody who would be willing to subscribe. Reach out and be the target market you want to see in the world. Hollygrove has a fantastic aggregated local CSA-style subscription that’s very user friendly.

I could go on for paragraphs about all the other places and farmers out there that would love to serve you if you would have them; but you, the idealistic consumer, are going to have to do the work of digging out and discerning the real good food economy from the glossy sheen of the false local food economy. Growing good food takes real work, and unfortunately in our present reality finding good food does too. Any good garden becomes more productive and easier to tend to over the years, and I believe our local food economy to be the same. If you can support and tend to local growers and purveyors now, their bounty will be exponential in the future and the brightness of their glory will outshine the dubious marketing of conscious consumer parasites.

Questions or news about gardening? Email the Dirt Nerd at Ian@southboundgardens.com