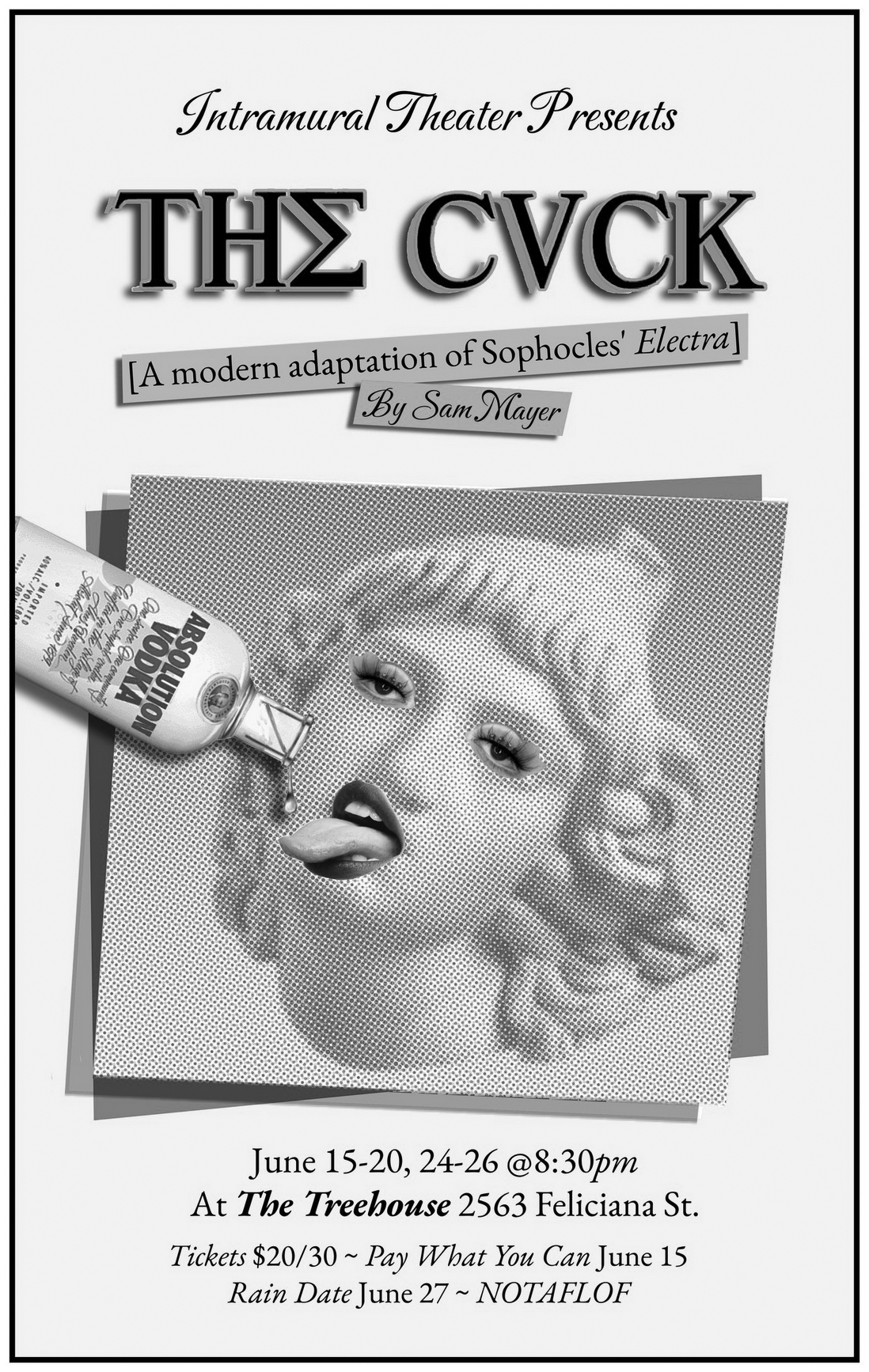 As the new month rolled around, I completed my monthly ritual—excitedly plucking the latest edition of your magazine from my local coffee shop’s counter—and began reading through the July edition’s articles and flipping around to enjoy the photography. Unexpectedly, I came across a review of a play I had recently seen at a cozy backyard venue in the 9th ward: The Cuck [“Tragic Farce: Suffering through The Cuck” by Holly Devon].

I was horrified to see that this scathing review scoffed at a performance I had thoroughly enjoyed. Not one to easily discount others’ points of view, I read the review to see what criticism was offered to justify such damning writing. What I found was someone who seems to feel personally attacked by a piece of art and who totally missed the satirical nature of the play.

I will admit, on the surface this production is as described in the review: a bunch of instagram-obsessed new-age fraternity-bro festival-goers drinking vodka on stage. But around this disarray of drug-induced egotism there are characters such as the Peasant, played by Joshua James, who isn’t afraid to point out the absurdity of being poor and employed to abet the bourgeoisie in staying inebriated. There is also Ratty, a servant played by Mary Langley, who through minimal lines portrays the wide breadth of emotions that come with being a lowly maid. These characters expose the violent detachment of the rich from the reality of others.

I also appreciated each performer’s attention to detail and devotion to their characters. Whether it was the Chorus (Jordan Holton, Madi Zins, and Mary Davis), a group of those girls you really hope don’t get a table next to you at dinner, fan-girling over Electra or simply hitting a vape off center-stage, or the Old Man (Kevin Real) muttering to himself while walking out of the scene, each performers showed an unfaltering dedication to their character that did not fade when they weren’t in the limelight.

I’d also like to shout-out standout performances by Electra, played by Alexandra Miles, Orestes played by Paul Braud, and Kevin’s epic monologue (as the messenger) about how everyone was discovering world peace at the Argos festival while King Aegisthus was being murdered by Electra’s brother Orestes.

I think the reviewer has missed the point that the ignorance and apathy of most of the cast, namely all the rich privileged characters, is representative of the world we live in today. Everyone around us, and even we ourselves, are often caught up in being socialites, doing drugs, or simply working too much to concern ourselves with the plights of others, much less try to actively work against the systems that oppress us or are used to oppress others at our benefit. And at the end of the day the play works to show us that, if we choose to acknowledge it or not, we are all cucks. Often, we all let someone else have the power we could, we let someone else make the calls, and occasionally, we let reviewers who don’t know how to critique theater tell us how to think about things instead of coming with our own conclusions.

As for the price of the show. It is clearly stated on the playbill that NOTAFLOF [No One Turned Away For Lack Of Funds] and there is also a date provided specifically for paying what you can. The fact that the reviewer felt miffed that they were forced into paying more than they could is on them. If the times of today have shown us anything it’s that we have to speak up for ourselves. I also support Intramural Theater for asking a price that might give some of us pause. I don’t think art should be cheap. I want to support my fellow working-class mates, some of whom do theater as their full time gig, to be able to take home at least something for all their months of hard work. Work that is ultimately aimed at us becoming a better society.