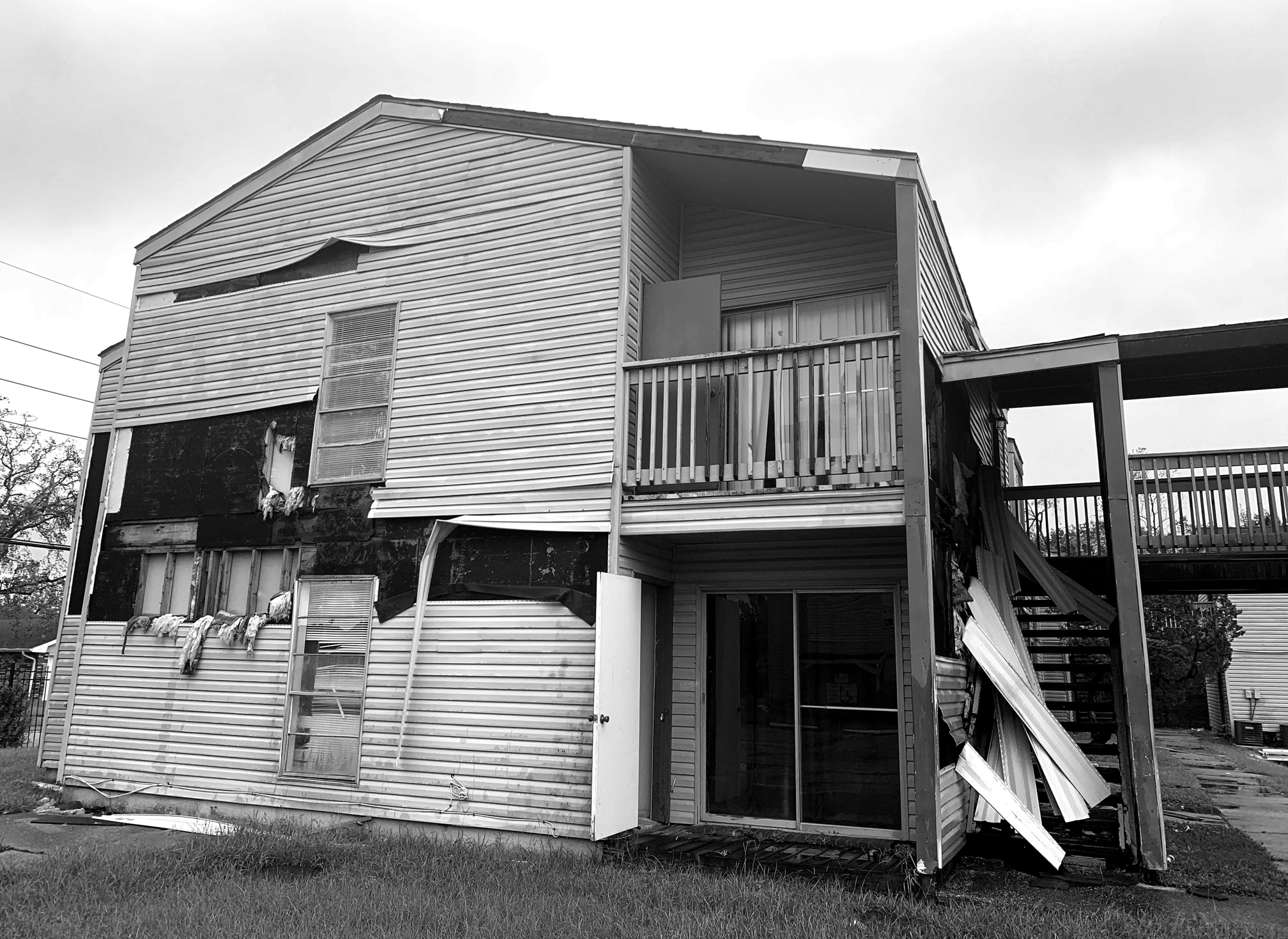 To anyone who will bother listening to one of my rants, I (Renard) often say New Orleans cultural community members are the most overworked and underpaid group of people in our city. These visual artists, Black Masking Indians, musicians, and performers (among other creatives) neither ask for nor want much. However, one thing they and all New Orleanians need is housing. Everyone in the city of New Orleans deserves housing that is both affordable and healthy, especially the people who are the economic drivers of our tourism industry, which generated over $10 billion before the pandemic. In addition to the displacement and gentrification that continues to follow Hurricane Katrina, half of all the rental housing in the city was destroyed in the storm’s aftermath.

These factors have made it increasingly difficult for culture bearers to find and secure housing in a city they can no longer afford to live in, yet still preserve and perpetuate our city’s cultural practices within. This forces them to commute from the surrounding parishes of Jefferson and St. Tammany, if not further. Acclaimed jazz singer and former 7th Ward resident John Boutté is one of the unfortunate examples of New Orleans’ musicians who live outside of the city limits now and must traverse into the city to gig because of continuously rising housing costs. “I’ve seen from 2006 prices of homes going from $40,000 to $350,000,” he states. The same year New Orleans became the fastest growing city in the U.S., 39% of surveyed musicians “reported making less than $10,000 per year.”

Despite all of this, in a state which favors the rights of landlords over its renters—more on this below—things are slowly becoming more equitable for the latter in New Orleans. Last May, the City Council passed “right to counsel” legislation, which will provide legal representation for renters during eviction hearings. Now, housing justice advocates are pushing for additional tenant protections that will hold landlords accountable for code violations and/or neglect in the form of a healthy homes ordinance. We’ve previously written about how cultural community members have faced “displacement; having to temporarily fix windows, roofs, and other property; living with mold…” due to the neglect of landlords, coupled with the cancellation of gigs and damage both caused by Hurricane Ida. With this ordinance—and its passage—we sincerely hope this begins to lessen one of the many economic burdens and stressors they regularly experience.

Every day in Orleans Parish, thousands of tenants deal with deteriorating conditions at the hands of slumlords. Some of these slumlords are local folks who have amassed a dozen or more properties. Others are out-of-town developers from New York, Chicago, San Francisco, Moscow, and every other major city on this planet. Although their goal may not be your suffering, the end result of their greed brings tenants misery by neglect.

Why are slumlords, slumvestors, and slumvelopers drawn to investing in New Orleans?

There’s no single reason why crappy slumlords are drawn here. However, we can examine the legal, political, and economic history of New Orleans to understand how they’ve come to have so much power.

A. The Tenant Laws

Currently there’s NO real functional force, policies, and/or laws that can do all of the below:

1. Investigate a landlord for code violations and/or neglect.

There are ways to do (1) when it comes to strictly code enforcement issues related to public health and property deterioration, but it can be hard to get them to come out. One can certainly do (2), but there are no laws that protect the tenant from retaliation.

B. Jim Crow, Slavery, and the Confederacy

The history of white supremacy in our city, state, region, and country means that there are often very reactionary views regarding “property ownership” that don’t exist as intensely on the West Coast or in the Midwest and Northeast. While notorious groups like The American Legislative Exchange Council (ALEC—the conservative policy group that organizes to pass right-wing laws) are trying to change housing policies nationwide (e.g., their big push behind supporting Airbnb), ultimately most states and cities outside of the deep South are secured in one vision regarding land management that housing is a human right. Our state legislature has been one of the most reactionary regarding landlord-tenant laws. This is directly tied to historical views regarding the Confederacy and “property ownership.” Therefore, the “state” (e.g., legislature) sees no reason to interfere in the lives of tenants. The de facto belief is that the “private market” will sort it out. Any attempt to reign in rogue landlords and developers is viewed as a “leftist” ploy when in reality, the horrible conditions that many tenants face is a matter of life and death.

While our rent has skyrocketed in the past 17 years in our city and metro region, the truth of the matter is that investors can make big money buying multi-family apartment buildings in areas such as New Orleans East, Algiers, Mid-City, and Uptown.

Because of our lax code enforcement laws regarding housing, lack of rent control (thanks a lot Baton Rouge!), and other issues, investors and developers see our city as a gold mine DESPITE all of the natural disasters we face yearly in our city. Without accountability from municipal and state government, these investors can collect outrageous amounts of rent while putting nothing back into the property. This is the reason why after Hurricane Zeta in 2020 and Hurricane Ida in 2021 we saw such disparate damage to multi-family apartment complexes.

The landlords that we receive the greatest complaints about (Joshua Bruno, Laura and Howard Russell, etc.) had rental units with some of the greatest damage BEFORE the hurricanes. Why is this? Delayed maintenance! Anyone who owns property knows that you gotta reinvest in your roof, siding, and mitigate other issues. If you’re not putting in the money to maintain your property, then you’re going to see major issues when a medium-sized hurricane comes into town.

We can look to the north, West Coast, and Midwest for solutions to our slumlord, slumvestor, and slumveloper problems. Our city needs a regulation system and program to rein in bad actors who cause illnesses, create rodent problems, and bad blight. What we need are habitability standards in the forms of a Healthy Homes Ordinance. A healthy homes ordinance is a way to create accountability, standards for quality housing, and more. This policy has four main components which can be seen here:

1. All rentals must meet a very basic standard of health and safety.

That standard should include safe and operating plumbing, smoke alarms, electrical, heat and cooling systems. It also requires roofs, windows, doors, and walls to be without holes and free of mold.

2. Renters and neighbors are able to report landlords who refuse to make repairs to the City.

3. A proactive program to register and inspect rental homes.

Property owners should register their rentals with the city. Small landlords with buildings of four units or less can self-certify that their properties meet the standard, but would be subject to inspections when complaints are filed. Units owned by larger landlords, or corporate landlords who own their properties as an LLC, should pass a basic health and safety inspection every three years. A proactive inspection program, rather than a complaint-based system, will ensure vulnerable renters don’t have to risk eviction to keep their home safe.

The policy should include a low-cost loan or grant program for small landlords who may need additional resources to bring their properties up to code. City resources should also be paired with guarantees to ensure rents are held stable for a period of time after the improvements are completed. Separately, some portion of the registration fee should support an anti-displacement fund to assist renters who may be forced to move if their unit is uninhabitable.

Passing a healthy homes ordinance means that we are protecting the majority of people in our city: Black, working class folks. This issue is intersectional and involves both racial and gender justice and equity. Learn more about this campaign and see a full list of our coalition partners  by checking out healthyhomesnola.org and following the social media of JPNSI (jpnsi.org), Louisiana Fair Housing Action Center (lafairhousing.org), the Renters Rights Assembly (nolarra.wordpress.com), and many other coalition partners.