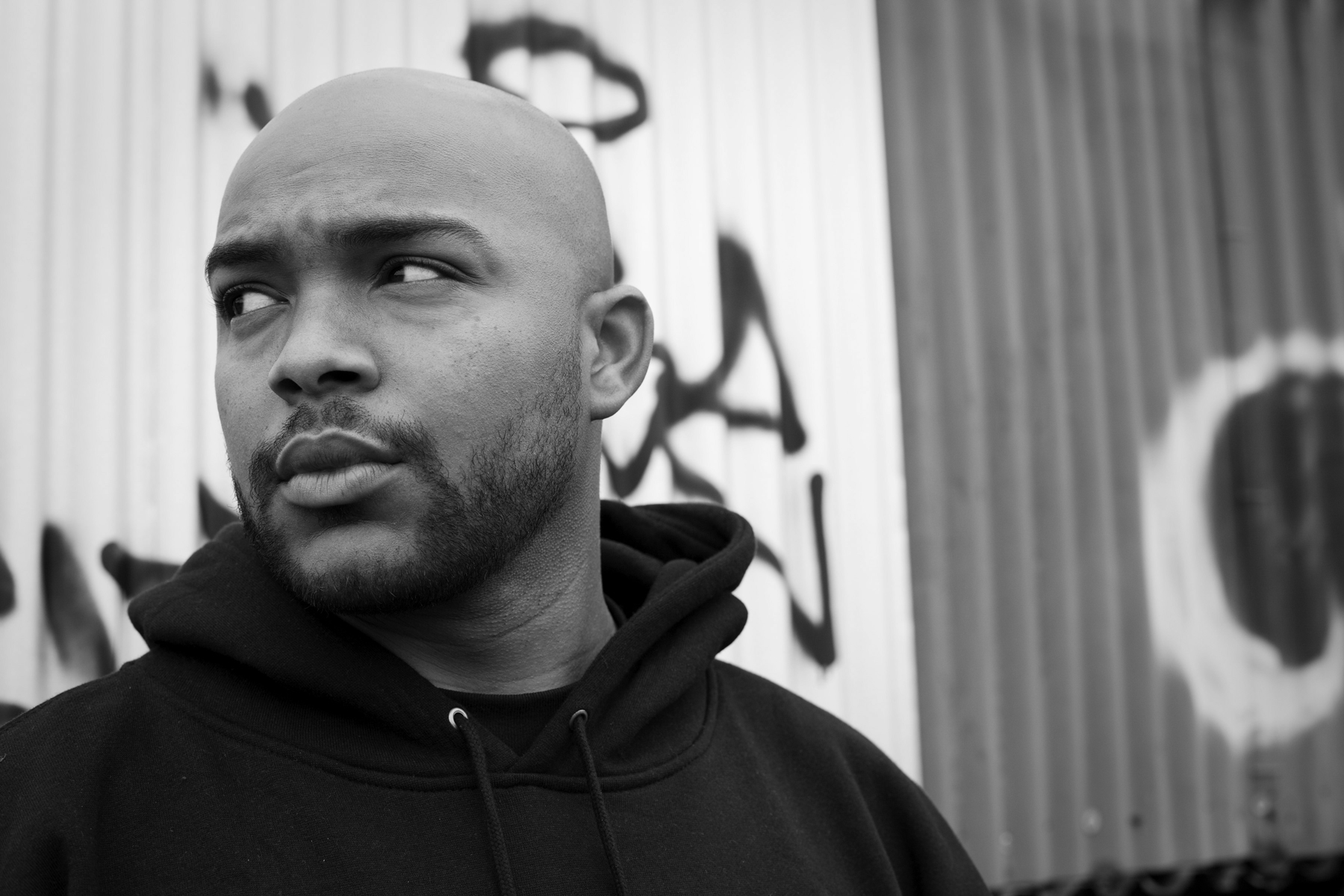 By RENARD BRIDGEWATER for MaCCNO June 2020

The world is inhabited by three types of people: doers, procrastinators, and thinkers. The latter deliberately plans for everything, meticulously creating contingencies, and walking through potential scenarios which may or may not actually happen. Although the second group doesn’t necessarily lack the will to get things done, there’s some internalized force or obstacle which prevents those individuals from completing tasks until it’s almost too late. And lastly, there’s those who just act, no detailed checklists to get lost in or uncontrollable fears halting their processes. This first group’s futures rely on their swift decision-making abilities and that alone. New Orleans creative Courtney Nero—more widely known as Nesby Phips—is a man of many hats: producer, emcee, DJ, visual artist, and father. However, most importantly, Phips is a man of action. As he puts it, “I’m just a doer, so I just did it. I ain’t thinking about none of this shit, bruh. There was no plan.”

Although there may not have been a plan, there’s certainly been a consistent level of success over the years, including production credits on arguably Wiz Khalifa and Curren$y’s most popular LPs (Kush & Orange Juice and Pilot Talk respectively), notable performances with Kendrick Lamar in the mid 2010s, last year’s Jazz & Heritage Festival, a bevy of speaking engagements, and soundtrack placements on Netflix shows. Success however, is relative to both the wielder and the observer with various yardsticks being used by both parties. At a time when he may have been his most “successful,” Phips decided to invest his time and energy into his children’s futures. Although he was flying home on a bi-weekly basis, Phips came to the conclusion that “Gone is gone. Presence is everything. You can’t father nobody through no phone, bruh.” With that mentality, the Hollygrove native chose to “park it and focus on family.”

For quite some time, artists across genres and disciplines have striven for a balance between their personal and professional lives. Being both a father of two and someone who operates off of intuition and instinct, balance wasn’t something the rapper actively sought. Instead, he fully committed himself to using the full 24 hours he had at his disposal and would sacrifice rest. In true DIY fashion, Phips declared, “I’ll do what I need to do for when my family need me and then whatever time I get, I’mma do this.” After Katrina, Phips and his family found themselves in Atlanta, where the city’s musical infrastructure made him feel “too close not to just go all out after it.” While his children were asleep, Phips was creating beats or performing at showcases, which built the foundation for his artistry and continued popularity today. The Jet Life affiliate didn’t give himself an ultimatum. For Phips it was never music or your kids, but music and your kids: “I wasn’t battling with myself like, you know, family versus music and all that other shit. They both coexist; both things are true… I am a family man. I’m a husband. I’m a father. I’m also a rapper and a producer.”

As fathering became more prominent, other skills had to be developed as well. For this hip-hop triple threat, one of those was cooking for his growing adolescents, “Co” (18) and Ty (15). And thus #DomesticatedRapDad, regularly recorded Instagram experiments in cooking and food prep through the lens of a young Black father, was born. Similar to other projects in Phips’ past, there was no marketing campaign, no belabored thinking about which meals would be the best, just the spirit of seeing an objective and completing it. “I had my kids almost all the time at this particular time and them niggas had to eat, bruh. It’s just that simple,” says Phips. Interestingly enough, his Nike-like attitude in the kitchen may have been developed while watching the women in his family cook, who “couldn’t give you a recipe” and didn’t measure. They too, just did. For Phips, production and cooking are two sides of the same coin; they both require some tinkering and fine tuning. “I know what a kick and a snare can do together with a bass and some rhythm and some keys. I understand what salt, pepper, noodles, Worcestershire sauce, butter, and Creole seasoning could do to make barbecue shrimp” he explains.

With Co’s burgeoning modeling career and Ty attending a pro soccer academy and earning a good GPA, it’s safe to say that the ROI is just beginning to accumulate as a result of Phips’ personal sacrifices. This is further exemplified when reflecting on two of his biggest produced hits: “‘Prioritize’ and ‘Supply’ was cool, but you know the gift that keeps on giving is the success of my children… Like my son playing soccer got me out to England. Music didn’t do that.” However, as previously mentioned, music was never put on the backburner and it eventually circled back around with new projects (one in both 2017 and 2018), revenue streams and opportunities that uniquely reflect him being both father and creative. Phips is a self-described “simple” man, who’s built a reputation, brand, and career by modestly attempting what’s necessary not only for himself but most importantly for his family. Ultimately, he pragmatically explains, “You just see what needs to be done and you do it.”

As New Orleans continues to reel from the impact of COVID-19, we’re all looking for rays of hope and joyful moments to remind us of what we love about the city and the lives that we will, eventually, be able to live again. Favorite restaurants offer curbside take out, some of our great public spaces like City Park are still open, and neighbors still talk to neighbors, even if it is from a little further away. But it has been the city’s musicians that have been the most visible (and audible) reminders that New Orleans is going to continue to be New Orleans when the pandemic ends, providing hope and celebration during some extremely challenging times.

Since businesses closed in mid-March and all gigs, events, and festivals were cancelled, we’ve seen live music start to spring up in new ways all over the city. There have been concerts on porches, driveways, and museum balconies. A pedicab has been repurposed into a “Mobile Music Box,” and a raft in the middle of Bayou St. John became a stage in lieu of Bayou Boogaloo. There was even a street corner Mother’s Day concert from the back of a pickup truck in the middle of the Garden District. These performances have been universally embraced by residents, and some have even drawn national attention. Musicians are making a little money, and New Orleanians get a little respite from another monotonous, stressful, largely housebound day. It’s a win all the way around. But for how long?

To the city’s credit, they have largely taken a hands-off approach and allowed musicians to perform unimpeded. But, as we begin to open up, there are some major unanswered questions and issues that need to be resolved. Last year, the Department of Safety and Permits decreed that no new business could have outdoor live entertainment. What happens now, especially when we are encouraging dining outdoors? Legally, most restaurants can’t have outdoor live music, and music venues are remaining closed for the foreseeable future. Last year, a street performer was arrested for performing in the back of a truck on Frenchmen Street, we saw a brass band shut down outside of Jazz Fest, and a new sound ordinance was in the works. Are we going to embrace this resurgence of music in neighborhoods and throughout public space; or are we going to revert to the scrambled, arbitrary enforcement and policies that were in place before?

One of the biggest mistakes New Orleans leadership made over the years was ceding our cultural policy decisions to the tourism industry and bureaucratic agencies like the Department of Safety and Permits, who were unaware or uncaring about the needs of the actual cultural community. By nature, musicians are innovators, hustlers, and problem solvers. They are already figuring out a path forward. This time, the city needs to let them lead the way.

Top photo courtesy of the artist