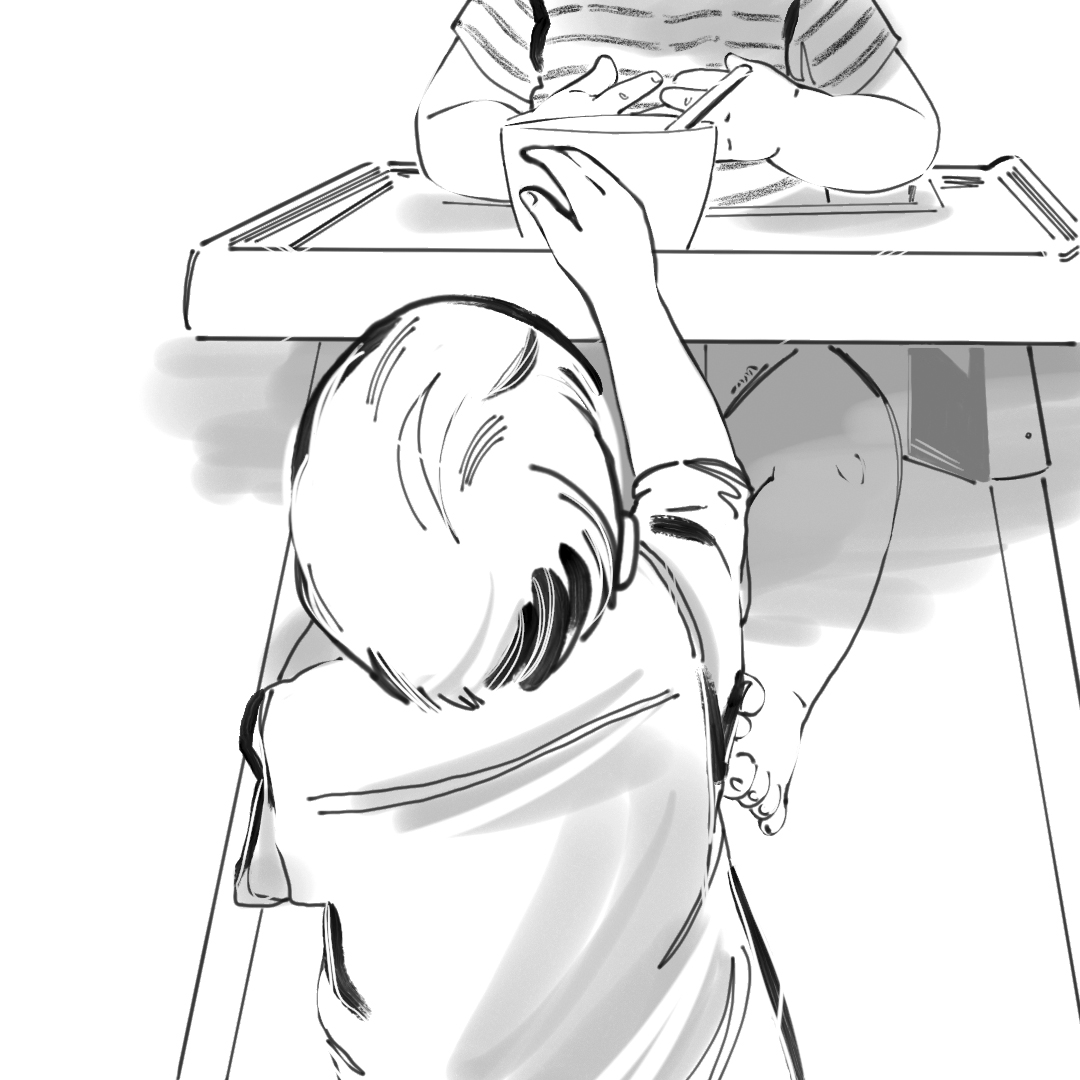 ANTIGRAVITY Senior Editor, freelance writer, rescue dog aficionado, and hobby baker Erin Hall previously penned the column Writing for Two, which focused on her experience navigating pregnancy and parenthood for the first two years of her first son’s life. She now coordinates and oversees our Raising Louisiana column and is passionate about giving voice to the diversity of parenting experiences. She lives in Algiers with her husband, her two young sons, and a sweet old lady dog.

THE FIRST CUT IS THE DEEPEST

I’ve been told by a lot of parents of multiple children that going from one child to two was the worst transition for them. Even harder than becoming parents the first time around. They’d joke that once you have three, you might as well go ahead and have four. It only seems to get easier as your family grows, but the one-to-two jump was torture.

As I write this column, we’re mere weeks away from celebrating my second son’s first birthday. With 12 months of being a two-kid household under our belt, and nearly four years of reflective space to look back on raising my oldest, I can firmly say this: Those friends were full of shit.

Don’t get me wrong. For many people, that statement is probably true. The adjustment to juggling the needs of two children is challenging. But my second son’s infancy has been a completely different ballgame from my oldest son’s first two years of life, and it all comes down to one thing—mental health.

If you’re a longtime reader of ANTIGRAVITY, you’re probably familiar with the story of my becoming a mother (see: two years of Writing for Two columns). But if not, here’s the CliffsNotes version: I got pregnant unexpectedly right after getting married to my boyfriend of over a decade; I had a relatively uncomplicated pregnancy but a harrowing 41-hour labor and delivery; I struggled with breastfeeding and postpartum depression in the immediate aftermath of the birth; a week after I left the hospital, my father was rushed to my hometown ER and, due to medical negligence, suffered severe brain damage (he died on my son’s one month birthday); as I finally began to surface a bit and get my head above water, my mother died; then COVID-19 hit.

This is the lens through which I parented my oldest son in his infancy. I have spent my whole life battling generalized anxiety disorder, but the hole I found myself in after Emmett’s birth was unlike anything I had ever experienced. I was in over my head in a big way.

I saw a therapist. I got on meds. But every day was still laced with a constant state of lowkey panic and irritability. I found myself constantly triggered by his actions. He would make a mess while eating and I would struggle to remain calm. He would wriggle and fight during diaper changes and I would find myself yelling (which subsequently made him cry, of course).

I made it through those first two years of his life on a hope and a prayer. I tried to surround myself with support, but I felt every single day that he deserved better than I could give him. As far as I was concerned, I was broken and everything I was doing was breaking him.

I look at my younger son daily as he cruises across the furniture, pulling things off and strewing them everywhere. I watch as he drops food all over himself while gleefully eating breakfast. And sometimes my heart actually aches.

Because after years of therapy and processing my anxiety, 95% of the time I am able to step back and avoid being triggered by the things he does. But I couldn’t do that for Emmett. I wasn’t the same mother to him that I am to Vincent. It is my life’s greatest regret.

I know that I wasn’t well when Emmett was young. I was in the throes of PTSD and trying my absolute best to not slip under the surface of the water for good. But was he scared of me? How I was sweet and loving one moment and in a rage the next? How did his little mind interpret my mood swings? Did he feel responsible? Sometimes I can’t bear to put myself in his shoes. The shame it conjures is too great.

Instead of dwelling in that place, replaying scenes that I cannot erase or rewrite, I am choosing every day to wake up and be the mother Emmett deserves. From the moment he took his first innocent breath in this world, I should have been his safe place. I wasn’t always able to be. But I am now.

I try to approach each day with intentionality, pouring all I have into both Vincent and Emmett. Marshalling the patience of the saints. Leading with gentleness as much as humanly possible. I feel like it’s the least I can do to right the wrong I feel I did.

Having two children has also given me a powerful dose of perspective. I obsessed over Emmett’s sleep schedule to the point of rigidity. I let people convince me that the only way he would ever sleep through the night was if I refused to feed him and let him cry alone in a dark room. I’m not here to shame sleep training, because God knows I’m also not putting my kids in my bed with me and nursing them around the clock until they’re 6. But I feel like there was so much severity in the way I parented Emmett as an infant.

I was so frazzled and constantly on edge that I lost all my softness. Of course I enjoyed him and we played together. I blew raspberries on his tummy and we stacked blocks together. He did not have a traumatic infancy. But I also put expectations on him that were grossly unfair for a child of his developmental stage.

These days, I have a tool kit and when I feel myself becoming triggered, I stop and go through my bag of tricks. I look at the situation at hand through the eyes of a very small human who is physiologically not yet capable of impulse control. I take deep breaths. I close my eyes. I stay in the moment. It is not easy. I still fail sometimes. But damn if I’m not trying.

In some ways, having reached what felt like my rock bottom with my first child is a relief. I feel like I’m not capable of being a worse mother than I was in those early days. I’m also working on forgiving myself and seeing my behavior during that time through the lens of mental health.

I did some intense EMDR sessions with my therapist leading up to Vincent’s birth. I was working to heal from the disappointment and fear that pervaded my labor and delivery with Emmett. During one session, my therapist asked me to revisit the darkest part of my labor and tell her what came up.

I’d  been working with intention to bring my mother into my second delivery, despite her not being physically present on this earthly plane anymore, so when I opened my eyes, I told my therapist that my mother immediately came to my mind. The twist is, she wasn’t there for Emmett’s birth. I shared about how badly I’d wanted my mother in the throes of my labor with Emmett. How I had told her not to come because I knew she wasn’t well and that my husband and I were going to do this as a team.

I talked about how desperately I had needed my mom there to hold my hand. How I could imagine the other members of my family saying things like, “I knew you’d ask for the drugs” or “Women today aren’t built to have babies like they used to; you aren’t strong enough.” But that I could feel my mother holding my face in her hands and saying, “This is not stronger than you.”

My mother was never the same after my father’s death. And years of battling chronic illness had changed her irreparably. But just a few months before she died, we were on a family beach trip together. Emmett had been behaving in a very challenging manner all day and I was at my wit’s end with him. I lost my cool and found myself walking out of his room at bedtime with both of us crying. He was 21 months old at the time.

I went to my mother’s room to watch TV with her and inevitably, she could tell something was wrong. We talked for nearly three hours about motherhood and how impossible it could feel sometimes to get things right. My mom’s illness and the untreated depression that stemmed from it caused a lot of damage to our once unshakeable bond. But that night, we were mother and daughter again in the purest of ways.

She shared stories of her mothering struggles with me and I shared mine in turn. At the end of it all, she looked me dead in the eyes and said, “Erin, you are a good mother.” There was no doubt in her voice. No coddling. It was a factual statement, delivered by the one person in the universe who would never lie to me about something like that. For one last time before she left me, she gave me what I needed most—a safe place.

This moment is so crystallized in my mind that whenever the darkness starts to creep in, I return to it for sustenance and reassurance. It became my mantra during Vincent’s birth and remains the mantra of every day of my mothering journey. I am a good mother. All the broken bits of me don’t change that.

I will continue to make mistakes. I will yell. I will probably have moments where I want to hit my kids. If you see me in Costco and I look like I’m about to pull my hair out, just give me a nod of solidarity. Our kids don’t need us to be perfect, but they do need us to be present and well. Below are some of the resources I found most helpful in healing my disordered thinking and finding a healthier way to parent.

I cannot stress highly enough how important it is to find a good therapist. If cost is a barrier, some great sliding scale options can be found locally at Jewish Family Service of Greater New Orleans (jfsneworleans.org), CrescentCare (crescentcare.org), and Loyola Center for Counseling and Education (loyno.edu/lcce).

One of my favorite positive parenting accounts to follow on Instagram. Dr. Becky provides tons of great tips free of charge and actually shows you how to work through scenarios that can arise with kids from toddlers all the way up to teens.

Another great Instagram account that’s focused on toddlers specifically and how to navigate life with a tiny person who possesses zero emotional regulation.

From great books to a regular podcast, Janet has this positive parenting thing down. She comes from an RIE (Resources for Infant Educarers) background and is a student of noted early childhood educator Magda Gerber. Her biggest cornerstone is advocating for the treatment of children as unique human beings worthy of respect.

If you’re like me, food and feeding and the messes that accompany it can be super triggering. As someone who has always battled against weight issues (and the societal pressures that create them) I want my boys to have a healthy relationship with food. This site has been a tremendous help for understanding how to frame eating in a way that is healthy and fun.

Another good Instagram account that gives actionable advice in the vein of “instead of this, say this.” Easily applicable and helps you recognize your own faulty patterns as well as ways to fix them. 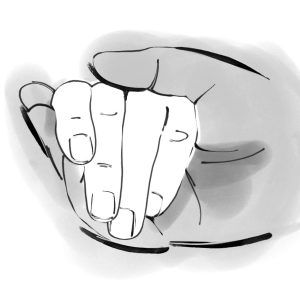