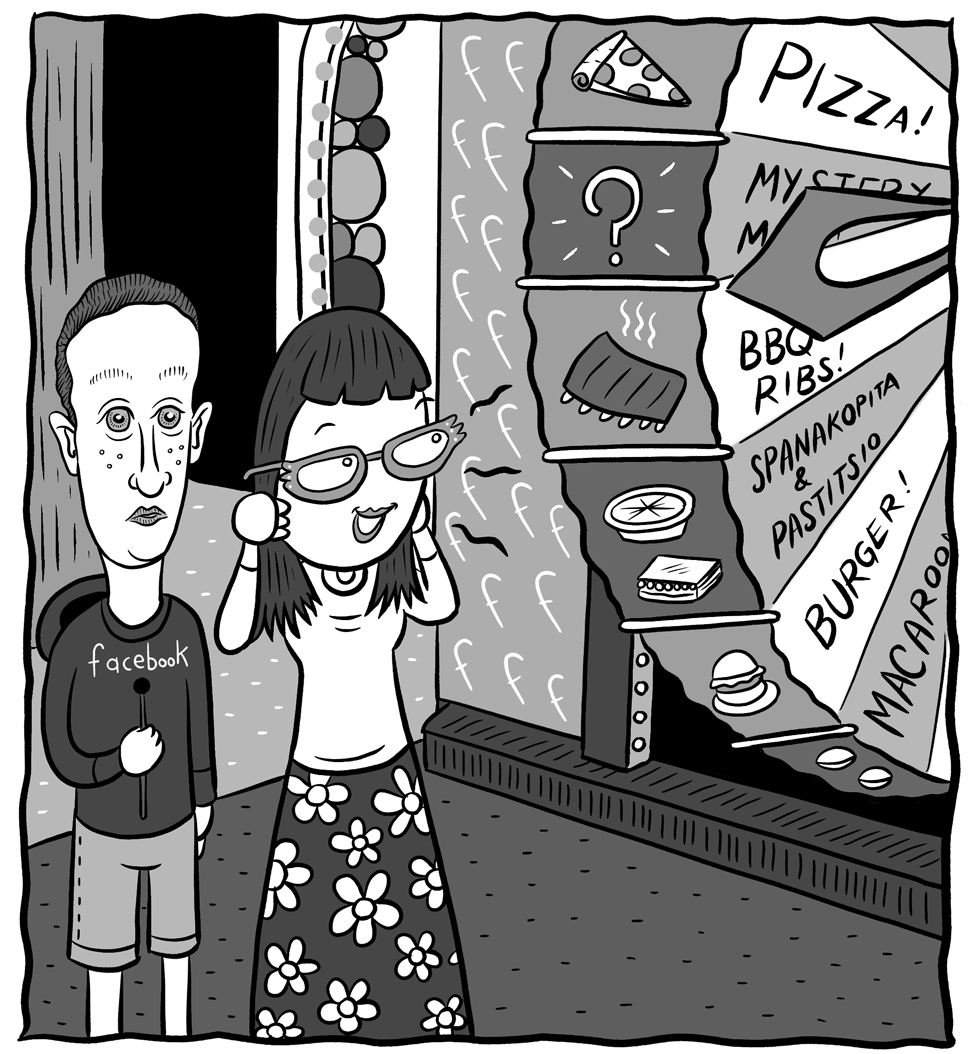 If you’ve ever clicked on the “Marketplace” section of Facebook, you may have noticed food randomly popping up in various categories. Tucked between bookshelves and biology textbooks lies a photo of tamales, or a styrofoam container proudly displaying a huge scoop of rice topped with a mystery meat. What’s going on here? I figured it was home cooks trying to make a few extra bucks—the modern day equivalent of buying a plate lunch from your neighbor, albeit slightly more terrifying because it involves meeting—and then eating food prepared by—a total stranger. I’m notoriously both nosy and a glutton for doing things that make me uncomfortable, so I hit the auto-reply “Is this still available?” on the first 15 or so food postings that I saw. There was a cornucopia of options, in a variety of different languages: macarons, hummus, ribs, stuffed grape leaves, chocolate cake, tacos, roast chicken, pho, hard boiled eggs, baklava, etc.

I realized early on that the variety of languages was going to be an issue (really my own issue because it’s no one’s fault but my own that I only speak English). One of the first posts I responded to featured a photo of various Middle Eastern foods in large pans. I had a very stilted conversation with the poster. He asked what I wanted; I asked if there was a menu or a listing of what he had to offer. He responded “yes” with no follow-up. So I asked if he could link me to the menu, and he sent me the photo from the original post. I asked for a listing of what he had; he responded with the same photo. Like, the photo looked good, but I had no idea what it was. So I gave it one last attempt and asked if he could just tell me what he was selling with some prices. He didn’t respond. OK. Well, onto tamales! The seller and I tried to message in my broken Spanish and her broken English, and I think we both ended up completely baffled by one another.

The vast majority of my messages were simply ignored and I started panicking. This was not working out like I thought it would. I assumed I would message someone, they’d say $12 for this chicken plate, pick it up at such-and-such address—the end. But it really didn’t work out that way. I placed one order with a lady in Gentilly for a kale salad topped with spicy shrimp and Hennessy wings (wings braised in Hennessy?) with Cajun pasta. We confirmed that she would be able to deliver it to my house at 5 p.m. So I rushed home from work and waited. I even downloaded the cash app on my phone so I could pay her. But no one ever showed up. I messaged her 30 minutes later: no response. I texted her an hour after that, and still got nothing. I finally wrote her back saying we must have had a miscommunication about time and that I’d try again another day. Whomp whomp. She actually did respond a day later apologizing profusely and explaining that she had an emergency come up—which, as it turns out, is not that rare, apparently.

Next, I ordered a half rack of ribs, some baked macaroni and cheese, potato salad, and baked beans from a very communicative man who lives off North Galvez. I was super excited because his page had some glowing reviews and, well, I like ribs. I was supposed to pick them up a few days later at 5:00. Having learned my lesson from Gentilly wings lady, I messaged him an hour before our meetup time to confirm and to get his exact address. No response. Hours later he sent me a long message to say he forgot. So that was that.

Somewhat demoralized by my experiences thus far, I nonetheless bravely soldiered onwards and ordered a dozen spanakopita and some pastitsio from a woman who lives deep in Metairie. Y’all, I haven’t lived in the suburbs since I was driving age, so I had no real framework for just how long it would take to get there during rush hour. I literally just sat and sat and sat in traffic. It was a truly brutal experience and I grew snippy and mean towards my dining companion. A drive that my phone guesstimated at 30 minutes took well over an hour. That’s not the chef’s fault, of course, but please remind me to never ever do that again. But this time, I actually got food! Since one of my dad’s best friends was Greek, I’ve eaten a lot of homemade Greek food in my day, and I’ve been to a lot of Greek restaurants. But I’ve never been to Greece, so obviously I can’t speak to authenticity. I can say, though, that this wasn’t my favorite. Spanakopita is a spinach and feta filled-phyllo pie. I’ve actually made them before from scratch, which is really difficult because phyllo is so tricky to work with. I’m assuming that’s why she didn’t use phyllo dough at all and wrapped it in a flaky pie crust instead. It was disappointing. Pastitsio is basically a lasagna but with bechamel instead of tomato sauce. If I went to someone’s house and was served this pastitsio, I’d be grateful and happily eat it, but it’s definitely not something I’d be willing to pay for again. The meat was completely unseasoned and the dish was bland. She also sent me a string of weird panicky messages the next day, which I’m still confused about.

My last attempt was with a woman on the Westbank who was selling assorted desserts. I placed my order for two types of macaroons (green tea chocolate, and peanut butter), and a “cream cheese bread.” I wasn’t entirely sure what cream cheese bread was going to be, but I figured what the hell: let’s be wild. She required a $15 deposit so I PayPal’ed her the money. I was supposed to pick it up in the Tan Dinh parking lot at 5:00. At around 2:00, she asked if I could meet earlier and I said sure, how about in an hour? She couldn’t do that because she was still baking the bread. So I suggested 4:00; no response. Around 4:30, she finally messaged that she was ready to meet, so I set off on my way, and waited. Shortly before 5:00 (our original meetup time), she messaged that she was on her way. Y’all know where this is going, right? Fifteen minutes later she messaged that she’d had an emergency, and wasn’t going to be able to meet me after all. What?! At least she refunded the deposit and well, I was at Tan Dinh, so it wasn’t a total loss.

Overall, my experiment failed. In the future, I’ll stick to ordering a fish plate from the guy down the street or, you know, just going to a restaurant. Even at the diviest of locales, I know I’ll actually get fed something, which is more than I can say for these flaky Facebook folks. Y’all, I really apologize. I thought I’d have a fun time eating and reposting on a bunch of homemade food made by unsung chefs, and instead I ended up being totally disappointed and frustrated. Sad trombone, indeed.