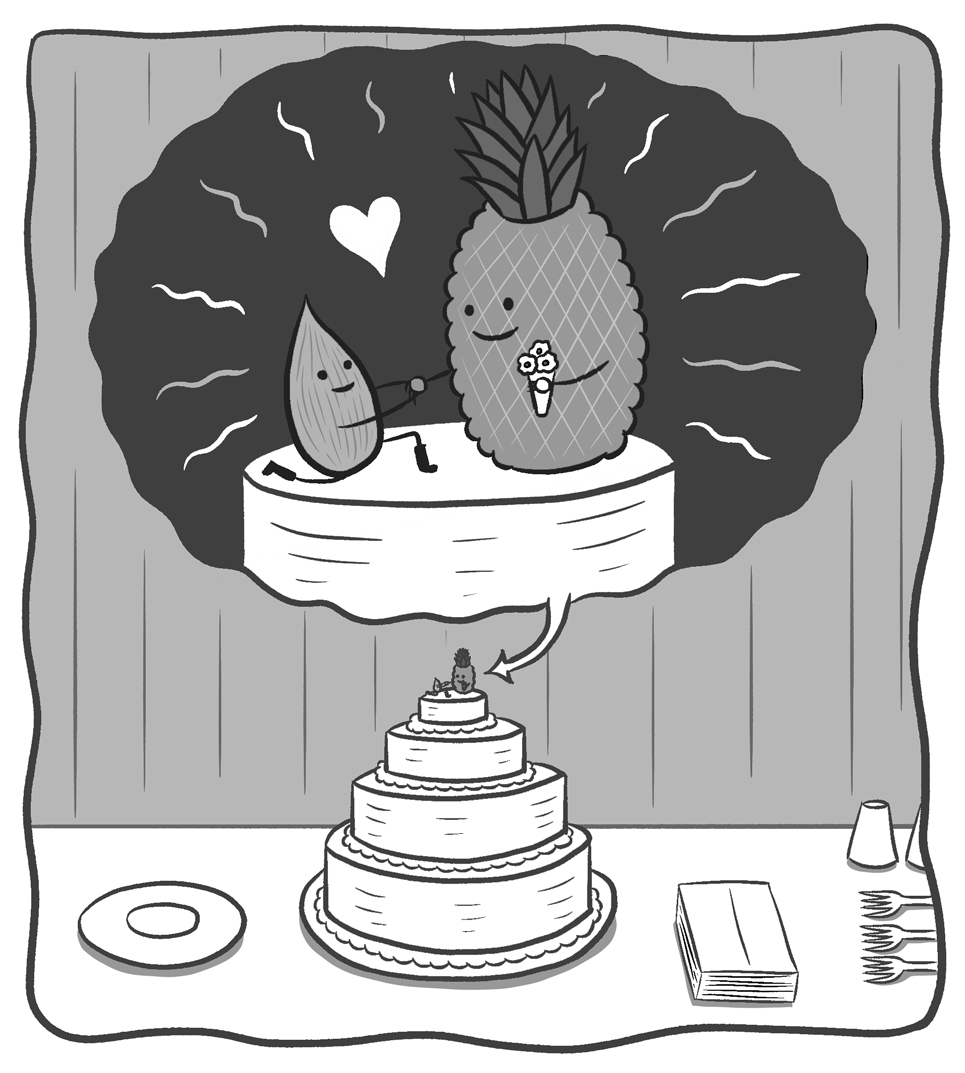 Dear Fellow Lifelong New Orleanians—did you know that wedding cake flavor is apparently not universal? When I hear wedding cake, I think almond and pineapple; you do too, right? My mind was blown when I found out that wedding cakes in other places come in myriad flavors. What? Why? What’s wrong with these people? It makes sense now that people in movies have wedding cake tastings before they get married. If wedding cakes can come in any flavor, I guess you have to figure out what you want? No thank you. Keep it simple and keep it almond. But where did the traditional New Orleans wedding cake flavor come from? And why are we the only ones using it?

My curiosity over the mystery of wedding cake flavor got the best of me. I’m a historian by training and trade (gotta use that fancy degree for something), so I decided to get to the bottom of the story. There’s a lot of writing about the history of the wedding cake, but not so much about the traditional New Orleans version of it. Most of the research I could find centered around British traditions; and as anyone with even a passing acquaintance with New Orleans food culture could tell you, that wasn’t going to be necessarily relevant. What writing I could find on New Orleans wedding cake traditions all mentioned Swiss Confectionery (which opened in 1921) as the gold standard in the almond/pineapple wedding cake, but no one could figure out the history of the flavor. Was Swiss Confectionery the originator? If so, was it a tradition from Switzerland? Was it, as has been suggested, imported from Sicily? There is a seemingly related cake—a 1930s-era Texan phenomenon, the Italian Wedding Cake: a dense almond, pecan, pineapple, and coconut cake. But our cake seems to pre-date it. So is it naturally N’awlins?

While marzipan and candied almonds are a traditional wedding treat in Greece and Italy, the first mention I could find of almond being used in a wedding cake proper was from an 1893 article titled “Wedding Cakes, New Style” in the New Orleans Item. Wedding cakes, as we know them, are a Victorian-era invention, so that date checks out pretty well. The article asks, “Who was the inventor of the new wedding cakes? …The latest specimen has a thin layer of sugar, only just enough to look pretty, and underneath are alternate layers of cake and almond paste, one as thick as the other. The consequence is that no one is defrauded of their lawful share of almond paste or ‘love,’ as it is usually called.” Interesting, right? By 1905, a Times-Picayune article advised the prospective bride on how to mix almond paste and sugars for her wedding cake, as well as how to properly decorate it. By 1916, the New Orleans States had a recipe for a “traditional” wedding cake that included almond extract. Hurray, we’re finally at almond-flavored cakes! But when does the pineapple come in?

Pineapple wasn’t widely available in the United States until the 1920s. In 1925, Dole Food Company threw a nationwide cooking contest to promote the exotic new fruit. They received 60,000 entries, 2,500 of which were cakes of some variety. The pamphlet,  Hawaiian Pineapple As One Hundred Good Cooks Serve It, was widely disseminated. In other words, pineapples were totally in at the same time that Swiss Confectionery was starting their little bakery on Frenchmen Street.

Now, I can’t confirm that Swiss Confectionery invented the eponymous wedding cake flavor—and they won’t confirm it either (I asked). But I feel pretty confident that the flavor we all know is a relic of the 1920s. And, hey, it’s about to be the ‘20s again! Best of all, you don’t even have to get hitched to enjoy a wedding cake-flavored treat; they’re everywhere!

Swiss Confectionery
(3700 Orleans Ave.)
Wedding cake in a cup, petit fours
Ah—the classic! The cake in a cup things are super weird; it’s not a cupcake, it’s like a round slice of cake tucked into a paper cup. It tastes exactly like you’re at a wedding. The petit fours are the perfect baby shower-colored pastels, and would be fun to bring to tea, or to any event where folks appreciate soft femme aesthetics. 10/10 Somethings Blue.

Gambino’s
(4821 Veterans Blvd.)
Wedding cake balls, petit fours, cupcake, almond cake with pineapple
Gambino’s really came through in this challenge! The cake balls were the best I tried, and they tasted vaguely tropical (I’m guessing pineapple extract?). The petit fours were perfect and the wedding cake cupcake was my favorite thing I had anywhere. And it’s so pretty! I love me some sugar pearls. I got the almond cake with pineapple just for fun, and ended up devouring it for breakfast. Gambino’s is where it’s at for wedding cake-flavored things! 10/10 Wedding Bell Blues.

Candace’s Cake Balls
(found at grocery stores)
Wedding cake balls
These taste like white chocolate, and are therefore not wedding cake-flavored, but they are tasty.
6/10 Jordan Almonds.

Sno-Balls To Go
(found at grocery stores)
Fancy wedding cake sno-ball
I’d never tried anything from Sno-Balls to Go before. It’s shaved ice drenched with syrup—so a sno-ball—but you buy it at the grocery store. This one is flavored with “wedding cake extract”—which I guess all the sno-ball companies use for their wedding cake flavoring—and it tastes pretty much just like you would expect. I recommend letting it melt a little, but otherwise, no complaints. Although, to be totally real, I’ll just go to Pandora’s if I want a sno-ball; these are a little weird. 9/10 Garter Belts.

District
(multiple locations)
Wedding cake donut
These are super pretty—creamy white with little pearls on top—but the flavor isn’t right. Nonetheless, I gobbled it up like a greedy little monster.
6/10 Maids of Honor.

Cupcake Allie
(found at grocery stores)
Wedding cake cupcake bites
The texture was gummy and the flavor was odd. No. 1/10 Ring Bearers.

PJ’s Coffee
(various locations)
Southern wedding cake coffee beans
I’m not mad at almond-flavored coffee, but calling these wedding cake-flavored is a stretch. Still, I’m in a good mood, and riding out a bit of a sugar high, so I’m gonna go ahead and give this a smooth 8/10 Veils.