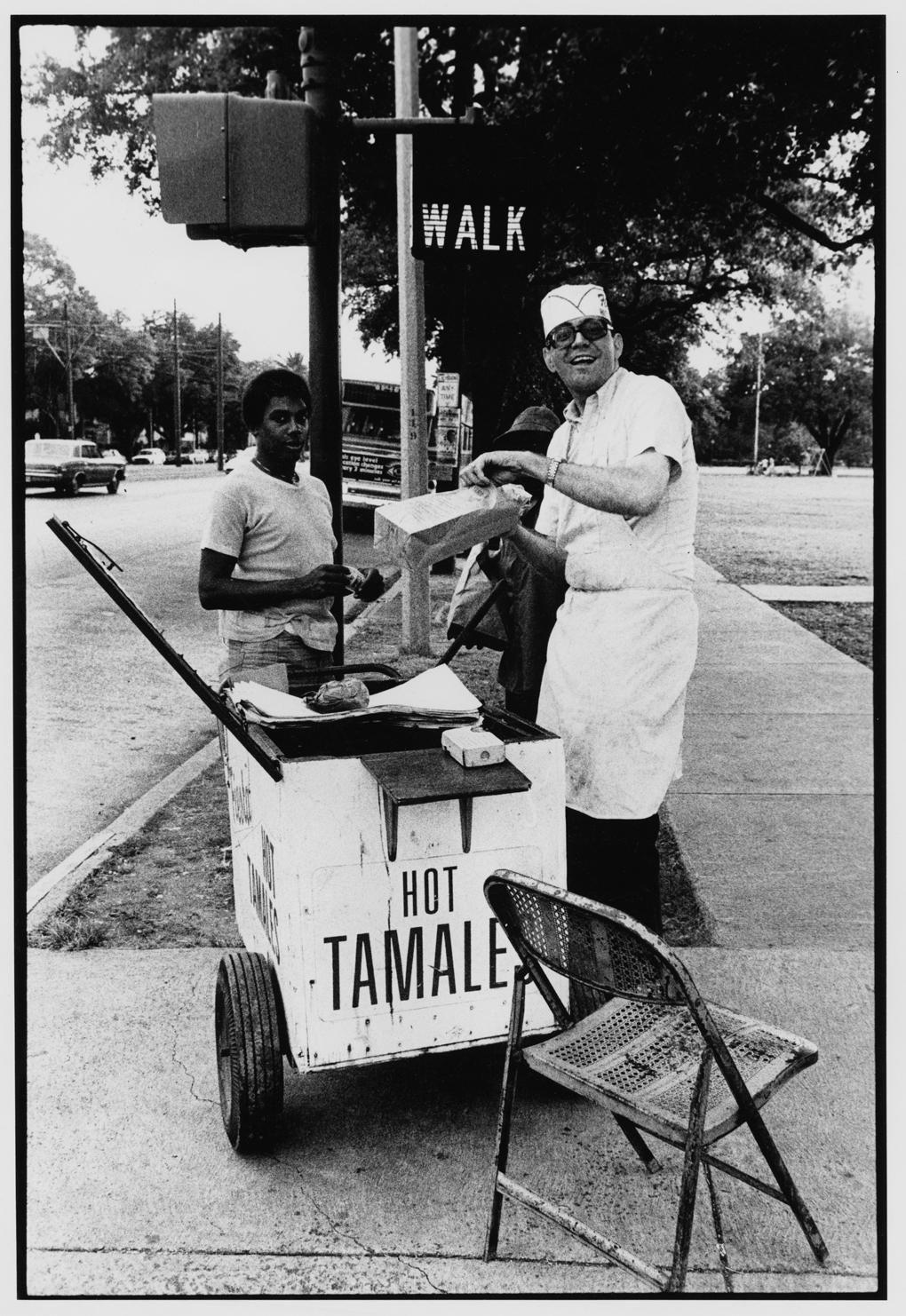 Someone out there should make a phylogenetic tree of tamale types (should that someone be me?). But until that happens, I’ll break down the basics: tamales are just a masa or cornmeal base with assorted fillings, wrapped up in some type of wrapper. They have a very long history; archaeologists have found pots from as far back as 200 A.D. showing the classic Maya glyph for tamales. I think most people in the U.S. are familiar with Mexican or Central American tamales, but New Orleans-style hot tamales are a bit of an odd duck—and now, one of the hardest to find elements of New Orleans food culture. What differentiates New Orleans-style hot tamales from the Latin American versions is primarily the cooking method: boiled or simmered, rather than steamed, the use of cornmeal instead of masa, and the use of ground meat versus shredded. Oh, and they’re very wet.

The hot tamales of our collective memory were popularized by Manuel Hernandez, an immigrant from Santiago, Mexico, who started peddling his wares from a cart on the corner of Carrollton and Canal in 1933. His wife, Rosena, was Sicilian, and his blend of spices was described as Mexican with “a touch of Italian flavor.” In 1960, he moved his business into a raised basement storefront at 4709 S. Carrollton (his daughter, Maria, ran a hair salon upstairs). By 1963, Manuel’s was selling at five satellite locations across the metro area. After he passed away in 1968, his son-in-law, William Schneider, took over the business. Manuel’s tamales were originally wrapped in corn husks, but under Schneider, the business shifted to using parchment paper. The business flooded badly during Katrina and never reopened. The main thing I remember about Manuel’s is how incredibly wet they were. In a desperate attempt to work off something other than memory, I found a recipe that had been printed in the Times-Picayune in the 1970s: Manuel’s tamales were simmered while submerged in a watery tomato sauce, rather than steamed, which is the traditional way Latin American varieties are cooked. That certainly explains the wetness! Manuel’s really is the gold standard by which New Orleans-style hot tamales are judged. I took a lazy poll of relatives—and other old time Yats—and Manuel’s was the only brand they remembered, even though there were other contemporaries in the game.

Manuel’s biggest mid-century competitor was Fiesta Hot Tamales, run by Mark Sweeney, Aubrey Angelette, and Sidney Gelpie, which opened in 1946 at 1209 Carondelet. At the opening, Angelette said, “Nobody north of Baton Rouge, east of Louisiana, or west of Texas seems to know what tamales are. I guess we owe a deep debt to the Mexicans and Indians.” When Fiesta opened, their tamales were wrapped in corn husks; by 1951, they were using parchment paper. Their tamales were sold via bicycle carts and at gas stations. By 1952, they were selling tamales in vacuum-packed cans at grocery stores throughout the city. They were open until 1983.

Another competitor was Bernardo Hernandez (no relation to Manuel), another Mexican immigrant, whose tamale vending predates Manuel’s. Bernardo was a chef at La Lune, a club on the corner of Bourbon and St. Ann. When the club closed during Carnival in 1923, Bernardo started selling tamales from the kitchen to make extra money. He began regularly selling from a stand on the corner of S. Robertson and Canal in 1925. Bernardo’s family has claimed that Manuel was actually an employee of Bernardo’s and used his recipe! Whether that’s true or not, no one can seem to verify. Bernardo went on to open El Ranchito, a Mexican restaurant at 1811 Elysian Fields, in 1946. All of the early ads and articles mentioned Mr. Hernandez’s famous hot tamale stand; they also mention that his restaurant specialized in Mexican food specially made for the American palate (read: “not spicy”). El Ranchito went out of business in 1975.

A caveat—and this is totally in the spirit of transparency—my mother is Central American, and I grew up eating traditional masa-based tamales wrapped in banana leaves. I’d had Manuel’s Hot Tamales several times pre-Katrina and found them far inferior to the ones I was used to at home, and my opinion largely hasn’t changed. I’ll always take a banana leaf tamale over the parchment paper New Orleans variety (or the corn husk wrapped Northern Mexican ones). That’s all personal preference, but I wanted to be as honest about my process as possible. I’ve always found the New Orleans style, filled with ground meat and saturated with tomato sauce, to be kind of weird. So, I’m not going to speak to whether or not these are good, necessarily, but rather how close they come to the hot tamales of yore.

Old Style Hot Tamales
(Food stands set up in parking lots, various locations: Marrerro, Westwego, Terrytown, Avondale)
Old Style Hot Tamales is run by a former employee of Fiesta and claims to use the same recipe. And I believe it, because these taste super old-school. They are very wet and very messy. If you don’t have time to drive to the Westbank, you can also buy these in prepackaged microwavable bags from Canseco’s. In addition to the food stand version, I also tried the frozen bagged ones and they’re definitely… something. 8/10 Old Schools

Oasis Snowballs & Tamales
(7200 St. Claude Ave., Arabi)
Oasis seems to be rather laissez faire about their business hours; I had to try three times before finally catching them (to be fair, there was a rooster just hanging out on their serving window ledge one of the times I went by, so I didn’t even get out of my car. Roosters can be mean and scary!). I enjoyed these tamales, but they don’t really enter the traditional hot tamale field at all. I quite liked my sno-ball, though, and their tacos are excellent. 6/10 Roosters

Mamita’s Hot Tamales
(Food truck)
Mamita’s Hot Tamales is run by the descendants of Bernardo Hernandez, who, as mentioned previously, claimed to be the progenitor of the original New Orleans-style hot tamale. It’s interesting they make that claim because these really don’t remind me of Manuel’s that much. They aren’t as wet and they aren’t as greasy. I thought they were fine, but they probably aren’t what you’re looking for if you’re hoping for Manuel’s. 7/10 Progenitors

Guillory’s Deli and Tamales
(3708 Derbigny Street, Metairie)
This charming little spot is tucked away on a residential street, way back in a neighborhood. I literally never would have found Guillory’s unless I was specifically searching for it. My favorite type of place! Their tamales were exactly like the ones I remember from Manuel’s: super wet, super tomato-y, and completely overwhelming. I’ll be back, though, because I want to try more items from the menu. Eating at Guillory’s felt like I’d time warped into New Orleans’ plate lunch past; it was truly a place out of another time. Hard recommend. 10/10 Time Warps

Fun note: There is a possibly related phenomenon known as Mississippi Delta-style hot tamales, which from everything I can tell, are more similar to Northern Mexican varieties, except much like the NOLA ones, use a grainy cornmeal instead of masa, and ground meat instead of shredded. The Southern Foodways Alliance created a “Hot Tamale Trail Map” documenting all of Mississippi’s tamale spots. Should I take a road trip? Oh, and this October marks the 44th Annual Hot Tamale Festival in Zwolle, Louisiana. See y’all there?