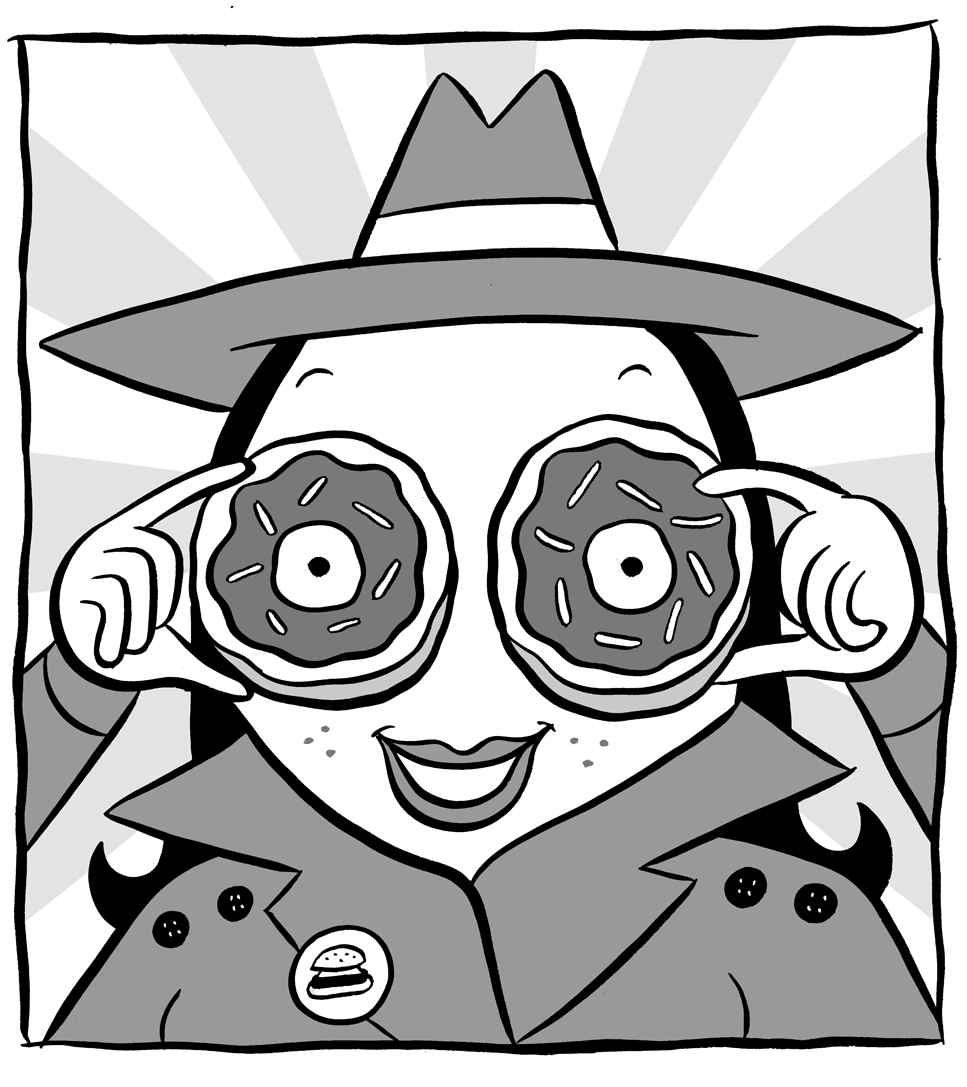 Are y’all ready for the donut smackdown? I’ve pitted six shops against each other to find the best donuts around. To even the playing field, I tried the classic glazed at each shop, and then to liven things up, I went for “something special” (which is either the wackadoodiest flavors they had, or what they’re best known for). Like many of my investigations, this one was too expansive for only one column; look forward to a part two in the future!

There are, I’ve learned, two types of donuts in this beautiful world of ours: the cake style and the yeast style. The yeast donuts are the ones that are as insubstantial as air—light, poofy, dissolvable. The cake ones are heavy, crumbly, dense, and—this is important for District—more able to withstand heavy toppings. There’s been much heated debate amongst donut heads over which is the better donut, and it all comes down to personal preference, obviously. I say all this, because I’m a yeast fan, and District is the cakiest of cake style donuts I’ve ever had. These donuts are big and heavy! Nonetheless, let’s discuss. Feel free to pass right on by that classic one, which is perfectly average, and go for whatever oddity they’re presenting that day. The Vietnamese Coffee tasted like coffee ice cream and condensed milk, plus there’s tapioca balls! No complaints. The Limoncello Poppy was excellent and reminded me of a lemon-flavored box cake. I really enjoyed both of them! If I’m being honest, I only go to District for the sliders—I’m a sucker for a teensy cheeseburger—but the donuts are good. I’m not breaking any new ground here since District is such a local fav, but it seemed wild to do a review of donuts and not start there. 8/10 Teensy Cheeseburgers

Krispy Kreme is the opposite of a fancypants artisanal donut shop, so it makes sense that where they truly excel is the classic glazed, and where they fail is everywhere else. The classic glazed donut at Krispy Kreme is straight up awesome: it’s sweet, delicately fried, and practically dissolves in your mouth. I totally get why someone would go there and order a dozen for a work party. It’s cheap, it’s tasty, and—as I’ve discovered—people love being “forced” to eat trashy chain restaurant food. But for real, don’t branch out! Their other flavors are not great, which is a charitable way of saying that they kind of suck. The Strawberry Iced with Sprinkles tasted like a strawberry poptart, but not even like someone made a strawberry pop tart donut. It wasn’t a hybrid—it just tasted exactly like I was eating a strawberry pop tart, which is, well, something I could just do if I so desired. There’s no reason for this to exist. The Sea Salt Caramel was a part of their collaboration with Ghirardelli, so I was stoked to try it! I liked it OK I guess, but it was odd. It was basically a cream-filled donut, but instead of cream, it was stuffed with some type of caramel gloop. I was the only person in my tasting party who thought the caramel gloop was OK; everyone else seemed really put off by it. And I didn’t like it, I just didn’t hate it, which is damning with faint praise if I ever heard it. 6/10 Pop Tarts

Look, you have to make your own decisions about whether or not you’re willing to go to a place called Cop A Donut that has a cartoon of a doofy looking police officer as its logo. I went because they have a fairly original hook: boozy/ alcoholic donuts. Now, what alcoholic donuts have to do with the police is beyond me. Is the implication that police officers love to drink? I really don’t get the weird connection they’re trying to forge. Like I get the whole cops love donuts cliché, and I guess I get the appeal of alcoholic donuts, but it’s all really incongruous to me. Also, they card you when you order a donut, which is very much a “what’s going on here?” moment. Is it part of the weird police theme? Is it because you might be ordering firebomb donut holes in a truly futile attempt to get wasted? I don’t know. The classic glazed was straight up excellent; if you’re in Kenner, and you have a valid state-issued ID, you may as well try it. Their specials, however, were weird. The Rumchata Boozy Hole (I didn’t make up this name, nor would I ever want anyone to think I could come up with something like that) tasted a bit like one of those powdered donuts you can buy in a bag at the grocery store, but without the powdered sugar. It tasted like neither rum nor horchata. The Irish Car Bomb was really bad, and not even the crumbled up Andes mints on top could save it. It just tasted like a big, minty, creamy blob. I took two bites and gave up. Ugh, and that name. 5/10 Boozy Holes

Oh, Tastee. I have a lot of good memories surrounding Tastee donuts. My dad worked nights for almost my entire life, and he would get home from work around the time I was waking up for school, bearing a box of Tastee donuts and Kastle burgers for our breakfast (just letting y’all examine my psyche bit by bit here). The classic glazed tasted like I expected—good, not great, but ultimately packed with nostalgia. On to the other flavors! Here’s the thing: Tastee may have had wacky flavors, but it was incredibly difficult to figure out. The flavors weren’t labeled, so I had to point at the donuts one by one (they were kind of all over the place and weren’t lined up by flavor, which was odd, but whatever) and ask what each was. The counter server was strangely reticent about telling me what the flavors were, so after about five tries, I gave up. I got the Almond and the Buttermilk Drop. The Almond was banging; it tasted like wedding cake, and it was blue! It was also the single best donut I had during this entire investigation. Like—seriously— the Almond donut was amazing. The Buttermilk Drop donut tasted like someone made a Buttermilk Drop into a donut. Fine, but nothing special. I don’t know, I’m really conflicted about Tastee. The donuts were pretty good, but the actual visit was rather unpleasant. The donuts were disorganized to the point of confusion, the server seemed to hate me for asking what the flavors were, and (this is specific to the one on Causeway, I guess) the parking lot was strangely hard to park in. Like I said, the Almond donut was my favorite one of all the 9,000,000 donuts I tried, but I’m not sure if I’d want to go back for it. Meh, I totally will, who am I kidding? 9/10 Unlabeled Donuts

I find it charming that Terrytown Cafe is inside of an old McDonald’s, and they’ve just left the sign up. It’s a weird choice, but it’s so devil-may-care that I admire it. This place is old school; if they hadn’t left the old McDonald’s sign up, I would have assumed they’d been there since the ‘70s. The classic glazed donut was very good; it was relatively warm, sweet, and had a real not-at-all cakey donut flavor. But here’s the thing: the Apple Crumble tasted exactly like the classic glazed. There was no difference. The Sour Cream tasted like a buttermilk drop, but in donut form (do they put sour cream in buttermilk drops—is that what makes them what they are?), but it also just kind of tasted like a really dense version of the classic glazed. In retrospect, it may have just been my fault for trying three flavors which were ostensibly the same thing? Like, these were very good donuts, they just all tasted alike. Make of that what you will. 8/10 Old McDonald’s

The Peanut Butter Croiassant/Donut (I have no idea what that means—are they going for a cronut thing?) was pretty good. The Cruller was like a weird waxy donut exoskeleton, which was practically inedible. The classic glazed was possibly the worst donut I had this entire investigation. I hear they have good coffee. But I didn’t care enough to try it. NOPE. 1.5/10 Donut Exoskeletons