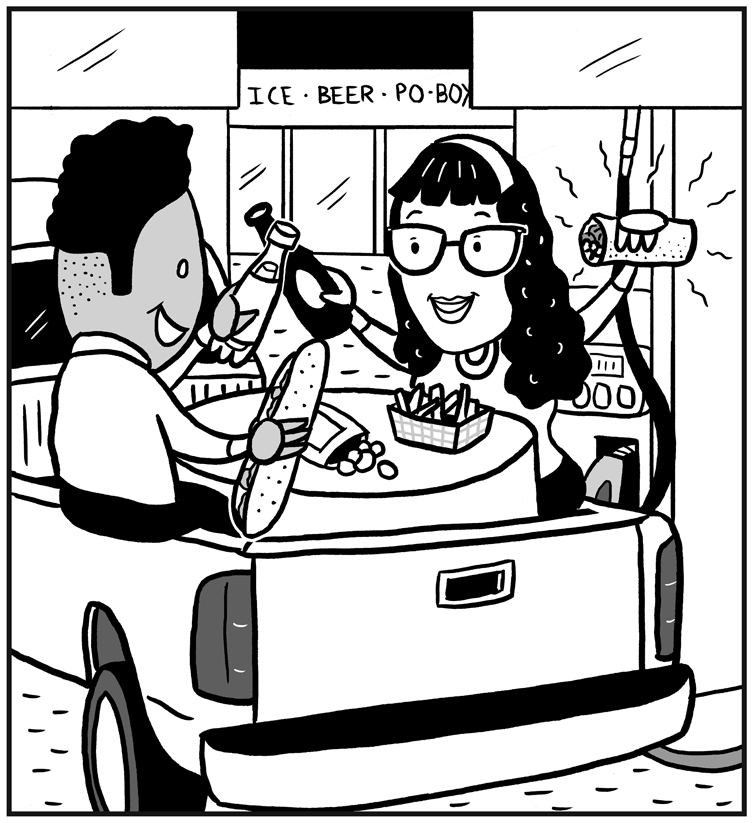 I recently went to a party that was catered by Shawarma on the Go, which is a little place inside of the JetGo on Magazine Street. I’ll admit that it’s not a culinary decision I would have made, but it was great, and it was the catalyst for this whole article! It made me wonder what other gas station gems I was missing, so I immediately started searching out other places. No ratings this time, because everything was really good! I am, however, letting you know about gas prices, because you may as well fill up your tank while you’re there, right?

Shawarma on the Go (inside the Jetgo, 3720 Magazine St.)
My inspiration! First, the bad, just to get it out the way: the falafels were super hard and didn’t taste like anything. But that’s the only complaint I have, because everything else was fantastic. The chicken shawarma wrap was literally nothing but chicken and some kind of pickled vegetable wrapped in a tortilla. Yes, that’s right, a tortilla. And, well, it worked. The chicken was juicy and almost nutty. At first I thought it was weird that there weren’t any veggies or sauce on the sandwich, and then I just kind of gave into the experience, because meat is clearly the star of the show here. The gyro was likewise well-seasoned and earthy; it just sort of evaporated in my mouth. It also tasted like lamb. I don’t know how else to describe it—most of the gyros I’ve had in the past have been of the lamb and beef combo variety. This was distinctly lamb. While the meat took center stage overall, the hummus was also a real delight: ultra creamy, mild, and bright, with a lingering vague citrus taste. Oh—and spend the 75 cents for a side of the garlic sauce; it easily holds its own against the toum at 1000 Figs, and may even be better, honestly. This place was such a revelation! I can’t wait to go again. Price of Gas: Expensive

Banks Meat Market (inside the Gas For Less, 325 S. Broad St.)
You could just get a regular poboy from the Banks Meat Market, and you wouldn’t be disappointed— they do it right. The bread is softer than I normally like, but it works. But why get a little one, when you can get the “whole loaf” special: a 32-inch poboy for $13? I think you can only get the “whole loaf” poboy in shrimp or hot sausage, but shrimp is what I usually want anyway, so no complaints from me. The shrimp here is perfect: the batter is light and not greasy, the shrimp taste fresh, they don’t go wild with mayonnaise, and the lettuce is relatively crispy. And you can feed four people with just one poboy! I think this would be a super fun place to bring friends from out of town who want to try a poboy for the first time—most tourists aren’t checking out the corner of Broad and Banks, so why not be a good host and show your friends what NOLA actually looks like? Also, the carne asada plate is especially (and surprisingly) tasty. Price of Gas: Average

Bahn Mi Boys (inside the Texaco, 5001 Airline Dr., Metairie)
I’ve been hearing about Bahn Mi Boys for a while, so this was one I was particularly excited about. We got three of the Chef’s Specials and one of the regular bahn mi. For the Chef’s Specials, we tried: braised pork belly bahn mi, honey sriracha shrimp bahn mi, and the spicy Asian BBQ brisket bahn mi. For the regular, I got the grilled chicken. First, the specials! The braised pork belly was middling, which was disappointing. I should have gotten the grilled pork instead, because the pork belly was so fatty (it just sort of blended into the bread). The honey sriracha shrimp was excellent, however. It was like a very hot and sweet shrimp poboy. The spicy Asian BBQ brisket was also very tasty; the sauce was spicy without being hot, and the brisket was tender and sweet. The grilled chicken was a totally serviceable chicken bahn mi—the chicken was well-seasoned, the vegetables were fresh, and the the bread was nice and crusty. But while I think Bahn Mi Boys is very good, if you want a regular (not a Chef’s Special) bahn mi, I think there are better (or at least more affordable) choices: the grilled chicken bahn mi at Bahn Mi Boys is roughly the same quality, but literally twice the price of the same item at Dong Phuong, and a dollar more than at Pho Tau Bay. So while I won’t personally be making the trek out to Metairie for any of their regular bahn mi, I’ll definitely be back for the specials. Price of Gas: Average

Swirl World (inside the RaceTrac, various locations)
I’m not a huge Pinkberry fan but I like frozen yogurt just fine, and I love the idea of smothering said yogurt in weird random toppings. Swirl World takes that idea to another level—the flavors are weird, the toppings are strange, and it’s super cheap. Oh, and you can swirl wacky flavors together, hence the name. Luckily, they had little tasting cups, so I tried almost everything. My favorite was the salted caramel, which tasted—and I’m not kidding— like buttered popcorn. The caramel cheesecake was like kettle corn. The cheesecake, by itself, was sugar flavored. Vanilla tasted exactly like the cheesecake. The chocolate chip cookie cake tasted like someone had mixed together cake batter and cookie dough, which is pleasant, if unexpected. Birthday cake tasted like raw cake batter. I didn’t try the watermelon, but my dining companion reported that it tasted like a watermelon Jolly Rancher. They boast about having 41 toppings and the slogan is: “That’s Almost A Gazillion,” which, hyperbole aside, is quite a lot. They have hot fudge and hot caramel along with pretty much any dry topping you could think of to put on yogurt: marshmallows, Nerds, Andes mints, peanut butter chips, granola, peanuts, gummy worms, gummy bears, raspberries, M&M’s, pineapple, mochi, Lucky Charms, Cheerios, chocolate chips, crushed up butterfingers, etc. It was overwhelming, but in a pleasant way. I ended up getting the salted caramel (a.k.a. the buttered popcorn) with hot caramel, peanut butter chips, mochi, marshmallows, and peanuts. It was super strange-tasting and kind of delicious. It was also dirt cheap. So yeah, I don’t think I’ll ever go to another overpriced fancy froyo spot, when I could just hit up the RaceTrac instead. Also, they had a dizzying array of tamales, taquitos, empanadas, and a large selection of hot dog weiners in the “Hot Meals” section. Oh, and there’s a nacho bar and also like 15 different types of hot coffee and a cappuccino machine. Win! Price of Gas: Cheap