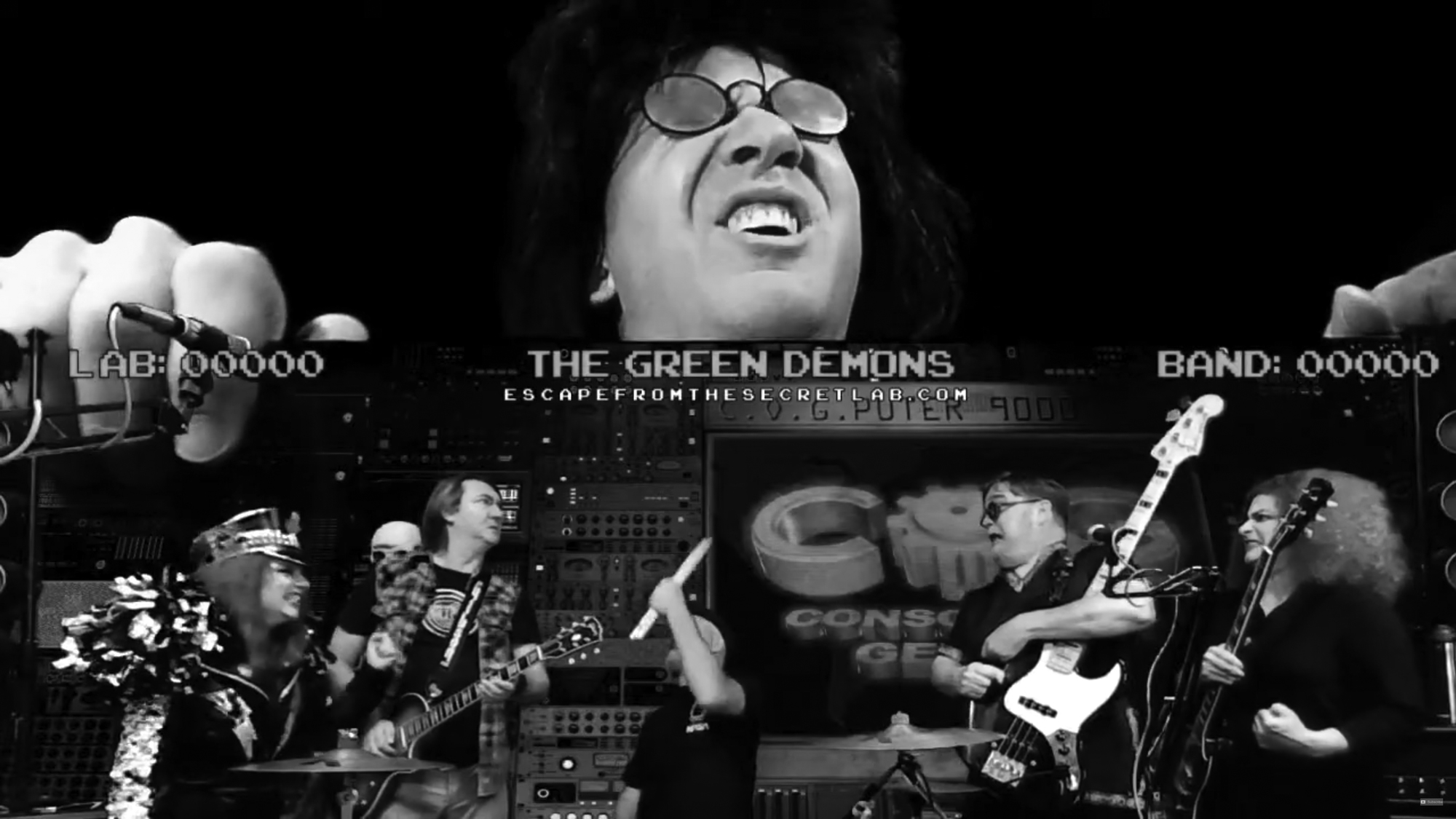 Last month PS4 released Tony Hawk’s “Pro Skater 1+2” but meanwhile in Harahan, Dr. Milo Thaddeus Pinkerton III was live streaming games from his Secret Lab. And no, his jousts are not available on Xbox Live.

As COVID-19 seemingly brought the live music scene to a dead halt this year, Dr. Pinkerton and his colleagues concocted “Escape from the Secret Lab,” an ‘80s video game sort of battle-of-the-bands show. In the vein of Mystery Science Theater 3000 and Morgus the Magnificent (may he haunt us from beyond), the googly-eyed host in a black fright wig and lab coat hosts one band weekly, inviting the public to PayPal the bands directly for “power points.” (A home pizza party is totally optional.)

Bands that have been probed by the live streaming lab include Nintendo-core group Raccoon City Massacre, local hard rock heavyweights Suplecs, and horror metalers The Tomb of Nick Cage (TONC), with acts such as “swamp poppers” Benny Grunch & The Bunch and local cowpunk legends Dash Rip Rock on the upcoming calendar. Other genres played include Americana, lab rock, psych, and vocal jazz—a brew so random only a New Orleans cable access show could develop it.

Lewis D’Aubin is the man behind the Dr. Pinkerton III persona, who has been fronting the band The Consortium of Genius (CoG) since 1996. “I could furnish as detailed an explanation as you’d like to the question of exactly how that character came to be, but it’s a pretty deep rabbit hole to go down, as the band has accumulated 24 years of crazy history between four studio albums, 224 live shows, and lots and lots of video adventures (some of which you get glimpses of during the course of a typical episode of ‘Escape From the Secret Lab’),” he says.

“Basically, in March I had some very cool summer gigs to look forward to that were canceled. Like everybody else, I had all this music equipment and time on my hands all of a sudden and, unlike most people, I also had a studio and video experience. Although I’d never done livestream video before, I asked around and it seemed in 2020 that a lot could be done for very little money—all you needed was OBS (Open Broadcaster Software) which everyone who is livestreaming is using. Most people use it just to overlay text on the screen (for example, saying ‘my Venmo is this’), but I’m using it for all kinds of stuff. For starters, I can run a bunch of cameras, chroma key, and prerecorded video files. And if you have a director at the computer running this software, they can treat it like a television studio. You can be equipped with a whole [green screen] studio for free. All you need is a good computer.”

So naturally, Lewis and his friends from TONC (Melissa and Sean Mooney) were sitting around drinking beers and came up with “this weird format that would fulfill the need for bands to play somewhat live to an audience but also make money by pitting the audience against the house.” A psychological tactic was developed to encourage the audience to give money directly to the band instead of charging a viewing fee, like other live streams. Lewis linked up with director Charlie Brown and graphic artist Margaret Trauth to get the ball rolling.

“Charlie has been there from the beginning on this show and has contributed as much as anyone to the show’s format. Margaret is the artist/animator who drew the logo, Drumbot, and the robot audience, as well as being one of my most trusted and creative friends to throw ideas back and forth with,” he adds.

Speaking to the video game aspect, Lewis says, “Just like everything in my bag, it’s pulling in one of my interests from real life. I restore pinball machines and video games—I grew up in the ‘70s. After the third or fourth episode, we started using primitive Windows games like Minesweeper or Hangman and very quickly figured out we could factor in the video games to keep the audience engaged. Our Facebook group votes each week on the game and I make it happen. We’re talking games I grew up with like “Centipede,” “Missile Command,” “Pac-Man,” and “Q*bert””

As for his character, Dr. Pinkerton immediately cites the late Morgus the Magnificent as an inspiration, but also considers theatrical bands as a component of the character he has been performing for 24 years in CoG. “I started my theatrical band because I was bored by going out and seeing local bands that didn’t have that component like GWAR and Alice Cooper had.” He also credits Emergency Broadcast Network (who went on to do production work for U2) as an influence.

Spliced in-between sets and video game challenges, Dr. Pinkerton gives viewers a satisfying helping of kooky late ‘80s/early ‘90s fare and flair by way of cheesy, fake mail-order commercials where operators are chained up nearby. “Note: This offer is not available in Transylvania or parts of Iraq” scrolls across the YouTube live feed as chatters discuss the night’s drink of choice in the comments section. As the bands collect their donations, they are invited to play throwback games like Konami’s “Castlevania” and Capcom’s “Ghosts ‘n Goblins” between sets. Elvira and Joe Bob Briggs would be proud.

“It’s been a slow build and our mission is to keep the show on the air until all the clubs are back open. That was our stated mission, but we’ll be willing to do it even after they open if people want to watch, because we’ve been having a great time.” 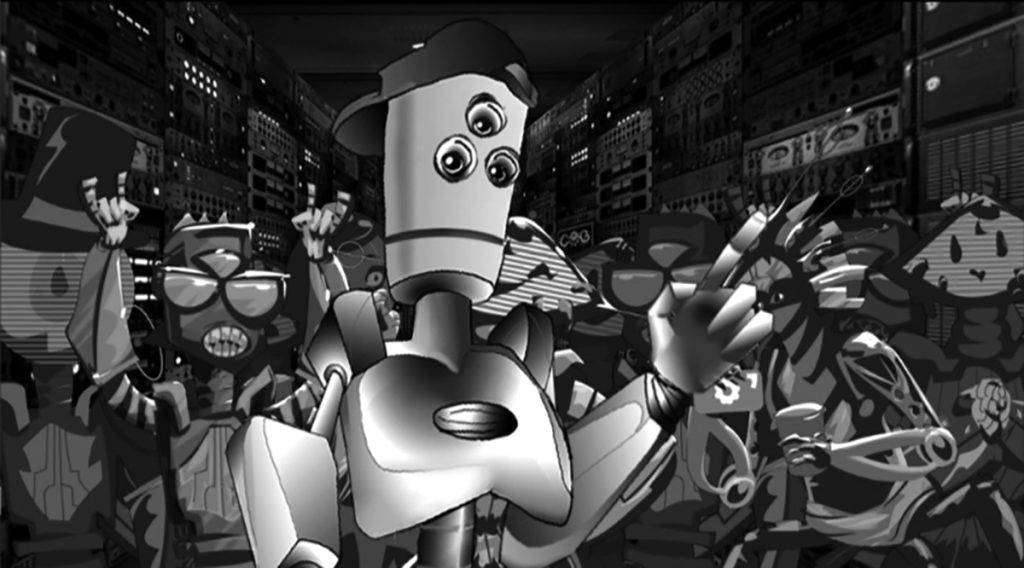 To learn more and play along (every Friday at 8 p.m. CST), visit escapefromthesecretlab.com or facebook.com/groups/EscapeFromTheSecretLab