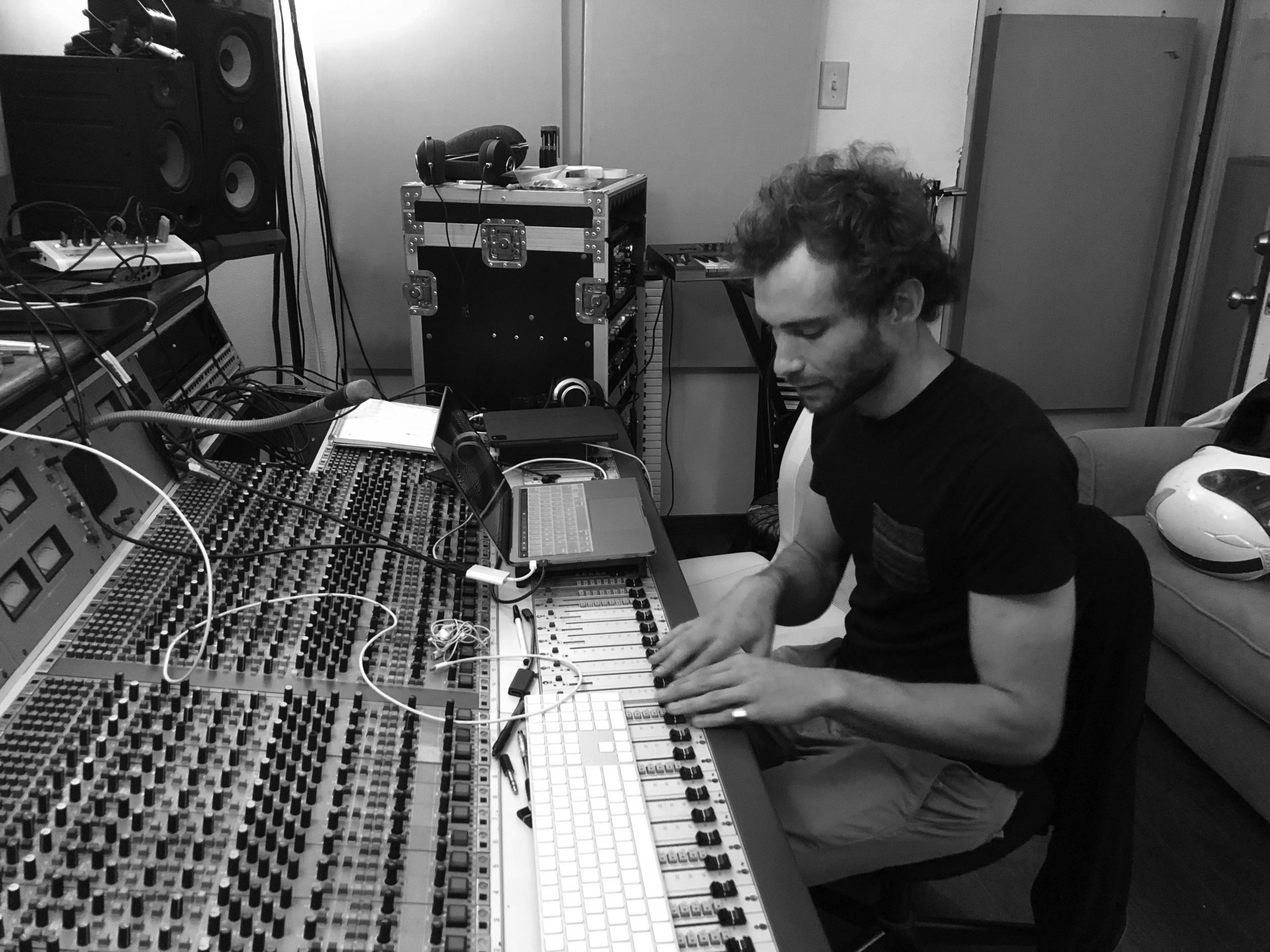 Before I owned a record player, I had already amassed a small collection of unusual albums. Two of these records have the name “Joe Ceponis” stamped on the sleeve. I pull To Be, by Consumer, out of the stack, slip the sapphire blue mottled vinyl out of its artfully printed case and give it a spin. I take a short video on my phone and text it to Ceponis. “I had almost forgotten about that record. At this point I’m sitting on two more, one being finished,” Ceponis texts back. It’s hard to imagine that he could have forgotten about his last solo album, but he’s got a lot on his plate these days.

“Spaceship Captain, Joe Ceponis,” as the kids in the Media Arts department of NOCCA call him, plays bass in Primpce, mixes sound for films, teaches high school by day, and is constantly updating Artisound Production, the music studio he and fellow recording wizard Keenan McRae built and run.

Not one to brag, when I ask Ceponis how he started his production adventure, he says, “I learned improperly—through the lens of a singer-songwriter. I just wanted to make interesting sounds. Somebody gave me a cracked Pro Tools license and a few cracked plugins. I bought an Avid Mbox Mini and an SM57 mic and I went to town. I didn’t watch videos. I was just like, ‘I love the White Album and I’m gonna try stuff.’ Eventually, I got stuff to sound bizarre and different.”

He goes on to explain that his first engineering gig didn’t do much to make his process more professional. “I worked in a studio that had really expensive equipment that was improperly put together. That’s a lot of what I focus on now—doing things the right way. People will advertise you a sound and say, ‘If you do this and this and this, you can sound like Billie Eilish.’ You’re being sold the sound and tricks to get to the sound, as opposed to organically building, with time and experience, until you get those sounds.”

The tricks and tools are remarkable though and they’re advancing every day. “Kids who are learning on the tools that are available today have completely different ideas available to them about what to do with sound. We didn’t have tools to express that, literally 10 to 12 years prior. I didn’t even know about the UAD infrastructure that Keenan instructed me on. I assumed that signal flowed through an interface into a computer. Once you figure out the tiers to getting perfect versions of that equation, it’s like, Holy shit, there’s so many ways to screw this up.”

“There really are. There’s a lot,” McRae pipes in. He’s at the board mixing the new Christian Scott album in burgundy-colored Focal Clear Mg Professional headphones that feel like the interior of a luxury vehicle and hum along even better.

The Christian Scott album has dozens of tracks per instrument. Apparently, this isn’t unusual for Artisound projects. “It’s all about what the project requires,” says Ceponis. “You always capture what you need to capture in order to make it what you want. So, if I was recording a choir, I would get each individual vocalist and then a collective stereo field of the vocalists in a room. That way, you have both. If you want the closer sound you can mute the room mic or bring up the close and blend it. You can’t be afraid of tracks. I’ve seen too many videos of people with 200 to 300 track sessions who make a lot more money than I do. We’re upgrading our shit all the time because you just have to catch up. We want to get the best sound. You’re just capturing energy and so the most sensitive, amazing equipment to do it is going to give you this really visceral experience on playback.”

It’s clear that Ceponis and McRae are collectors of unusual pieces. “I love the Dizengoff D4 Preamp,” says Ceponis. It’s modeled off of the Beatles preamp [a British tube console heavily used in the 1960s]. Technically it’s not all the way functional. I bought it used; I’m working on it. Our specialty is this vintage console which takes up most of the room and eats power supply for breakfast. It’s probably why we got hit by lightning this week. The magnetic power of this thing, the amount of transformers, it’s massive.” It’s remarkable how calm Ceponis and McRae seem about Artisound Studios having been struck by lightning two days prior, but they assure me that they only appear this way because they’re exhausted from having pulled all-nighters, in an attempt to find all the issues and manually correct them.

“My favorite piece in the rack we have is the Dangerous Music D-Box Monitor Controller,” he continues. “It’s an 8-channel summing amplifier—a really important piece of the puzzle. It provides separate speaker outputs for separate pairs of speakers with different amplifiers for each one. It has its own digital-to-analog converter. It spits out the most clean, sparkly representation of what’s going on—a crisp, open sound. It’s the last thing the sound hits before it hits the speakers. I’ve used it on pretty much every final mix since we’ve had it, ‘cause it glues things together. It brings it back into analog before printing it into data, which gives it more headroom. The pristine clarity you need to get some stuff right is nuts.”

When I ask if there are any pieces of equipment they like to use, but that are constantly breaking down and unreliable, they laugh and say, “All of it.” 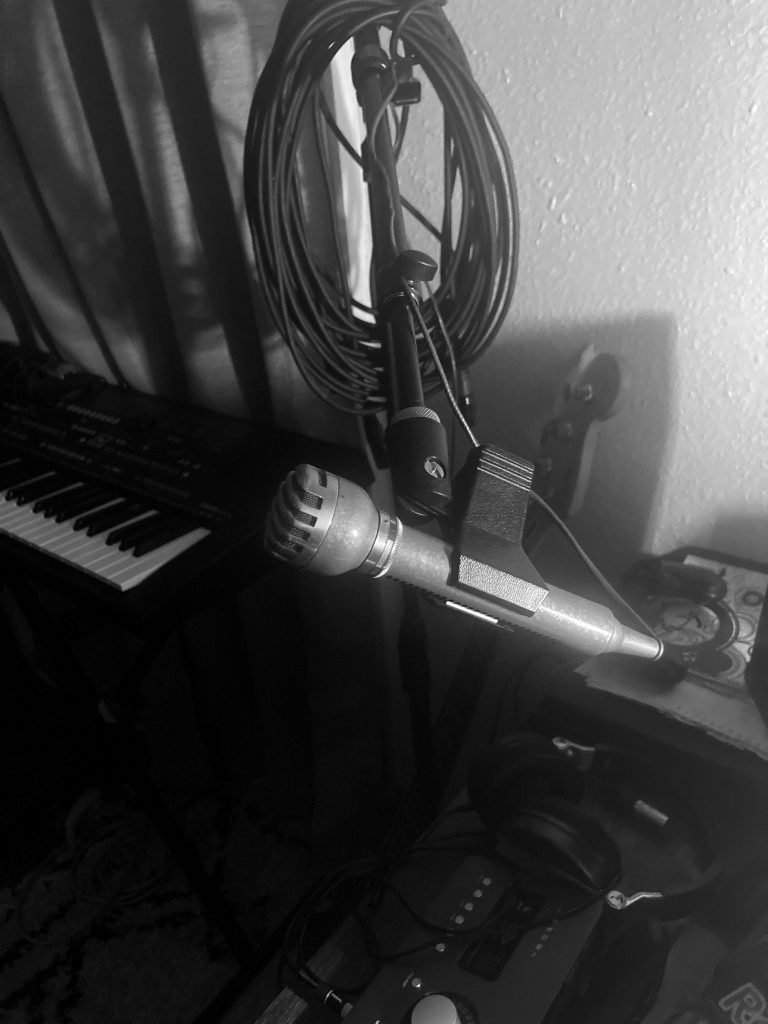 “When Primpce was recording their latest album, I gave them an old 1970s vocal mic,” says Ceponis. “That’s why those vocals have that gooey sound. It was an AKG D19 [pictured above], which is technically a dynamic mic for throwing on a tom or an acoustic guitar. It’s persnickety. The cable is literally put together by an Austrian guy in his basement, and it’s just barely on, so if you wiggle it just right, you get this amazing vintage sound. But if it distorts, it’s papery and nasty, because it’s not going to tape (back then it would hit tape and be beautiful, but here it’s not quite that). For guitars, I gave them an AKG C414 that had a messy capsule—which means it’ll distort if the capsule gets overdriven—not knowing that Alex [Brownstein-Carter] would just distort every guitar track on the Primpce album without knowing the capsule was blown. So everything turned out a little crispy and that became a part of the sound.”

Before I head home from the studio, I’m given a few sneak peaks of mixes. We all mumble a little prayer about lightning not striking the same console twice and I go home, leaving them to continue assessing the damage. 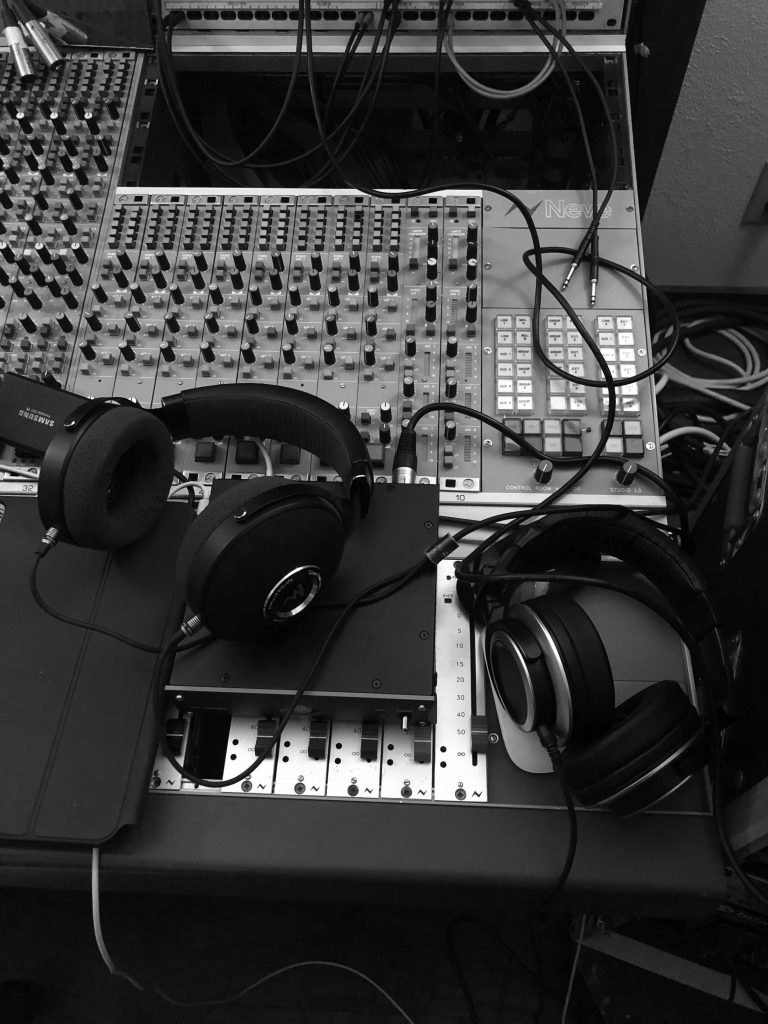