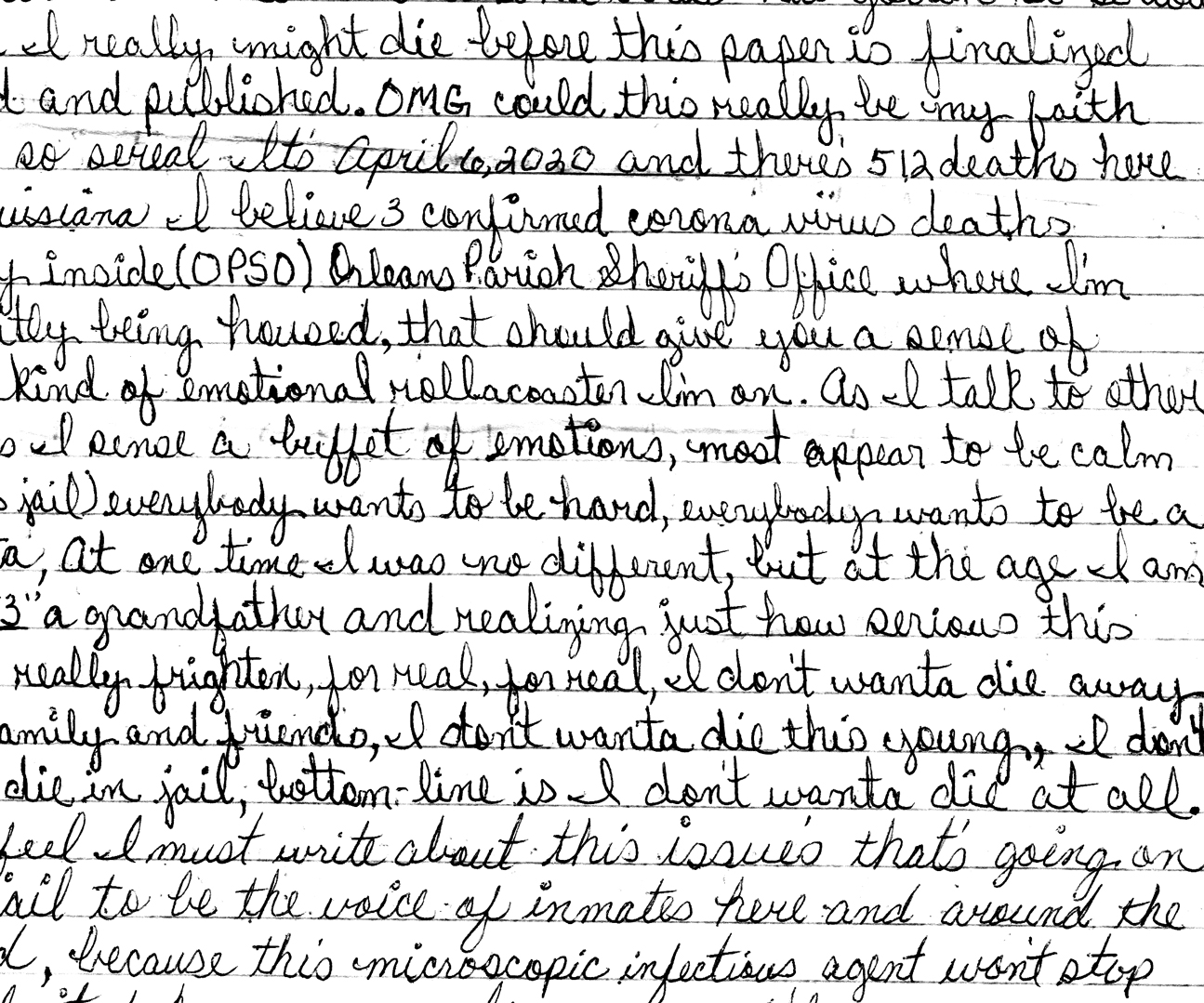 There’s tears in my eyes as I write these words because this coronavirus has gotten so serious and I feel like I might really die before this paper is finalized, mailed and published. This is so surreal. It’s April 2020 and there’s already 3 confirmed deaths inside OPSO where I’m currently being housed; that should give you a sense of what kind of emotional rollacoaster I’m on. As I talk to the other inmates I sense a buffet of emotions. Most appear to be calm (this is jail), everybody wants to be hard, everybody wants to be a gangsta. At one time I was no different, but at the age I am now (53!), a grandfather, and realizing just how serious this is I’m really frightened, for real for real. I don’t want to die this young. I don’t want to die in jail. Bottom line is I don’t want to die at all. So I feel I must write about the issues going on from jail to be the voice of inmates here and around the world, because this microscopic infectious agent won’t stop until it takes as many lives as possible.

I’m just one person but there’s others that are in extreme panic mode. The governor John Bel Edwards, the mayor LaToya Cantrell, with a broadcast on every news show with her stay at home campaign, remain calm… We don’t hear a lot about what’s happening in this jail from Marlin Gusman because he gets an estimated $127 for every inmate he houses a day. With between 900 to 1200 inmates housed at any given time you do the math… It amazes me how one man’s meat can be another man’s poison. Besides the horrible living conditions, awful food, lack of medical attention, it’s impossible to practice social distancing here. There’s no masks for inmates, they’re not properly sanitizing the inmate areas, our beds are less than an arm length apart so us inmates are left to fend for ourselves.

*Breaking News* Inmates are in an instant uproar. It’s 2:34 p.m. April 6, 2020 and as we look out the windows we see a caravan of protesters with signs on their cars saying “Free Em All” as the deputies try to contain us, forcing us to get off the yard, get in our cells, get on our racks. It’s extremely loud, inmates in the windows trying to attract the protesters letting them know we see them. This is beautiful but also has the possibility of becoming really dangerous for us inmates because most of the deputies are young and have never experienced anything like this, and the same goes for inmates including myself.

With gas being as cheap as it’s been this caravan of about 40 vehicles could ride all night. 20 minutes later as fate would have it the NOPD stopped the protesters for some reason or another. My guess would be because of the stay at home order, even though they were in their cars, with masks on. All we know is it didn’t last long. If there’s anyone reading this that was in the caravan please drop us a line because we watched the news for days and never saw anything about it. Why?

As the jail house calms down, the lights go out, and the inmates are told it’s “Rack Time.” I can’t help but think about today’s events, the food, the uproar, the protest, my life, my family, my friends. I can’t help but wonder how many have I lost to coronavirus of all the people I know. Remember communication is limited for me while I’m incarcerated.

I don’t think anything has hit America in my lifetime like this, not even the wrath of Katrina can compare to this… You must understand Katrina mostly affected New Orleans, but the coronavirus is a worldwide pandemic. It has hurt the economy in epic portions, and at a time when self employment is at an all time high… But there are others whose job isn’t in jeopardy. One job this is relevant to is the Orleans Parish Sheriff’s Office, because the deputies are afraid because they come in contact with all these different types of people on the daily basis. The deputies are scared to death in this place looking at each other, trying to see who has symptoms, looking at inmates to see if they’re showing any symptoms, walking around with masks and rubber gloves that are in short supply. It’s funny to see how something as small as a sneeze, sniffle, or cough can cause so much panic in your fellow man.

Orleans Sheriff’s Office is so afraid (or should I say its officers) they’re not coming to work for fear of contracting the coronavirus which has the jail in a panic. One of the most important duties in jail is count time, and believe it or not they’re not even doing their counts… Today is like the 24th day of the coronavirus as I wake up to the sound of “Feed up, Feed up, sleep late lose weight.” I sense mixed emotions among the inmates, the younger ones calm and unconcerned, the older ones like myself worried and tense, wondering when will this pandemic let up, because our people are dying, and we don’t know what’s going on outside the jail.

And the deputies in here are so on the hush hush, afraid to lose their jobs. The jobs that used to be done by the yanks (trustees) are now done by deputies, cleaning the halls that nobody is allowed to use, serving the food, another job held by trustees. The deputies hate this the most, because without yanks they must work. Cleaning, mopping, serving food, etc. Now they gotta do it, and you can see the stress on their faces. Now they see how hard the work was for us yanks. I was once a yank. Now with 681 deaths in Louisiana the coronavirus has proven itself a force to be reckoned with…

I heard on the news today April 14, 2020 the mayor cancelled all the festivals for the rest of the year. I would be mad about Jazz Fest but saving lives is paramount. I only hope and pray that this ends as fast as it came, and I can’t help but wonder how many of the 681 people it has killed that I knew or have came in contact with. With that being said we’d like to thank everybody on the front line across America and abroad. Be good and be safe…