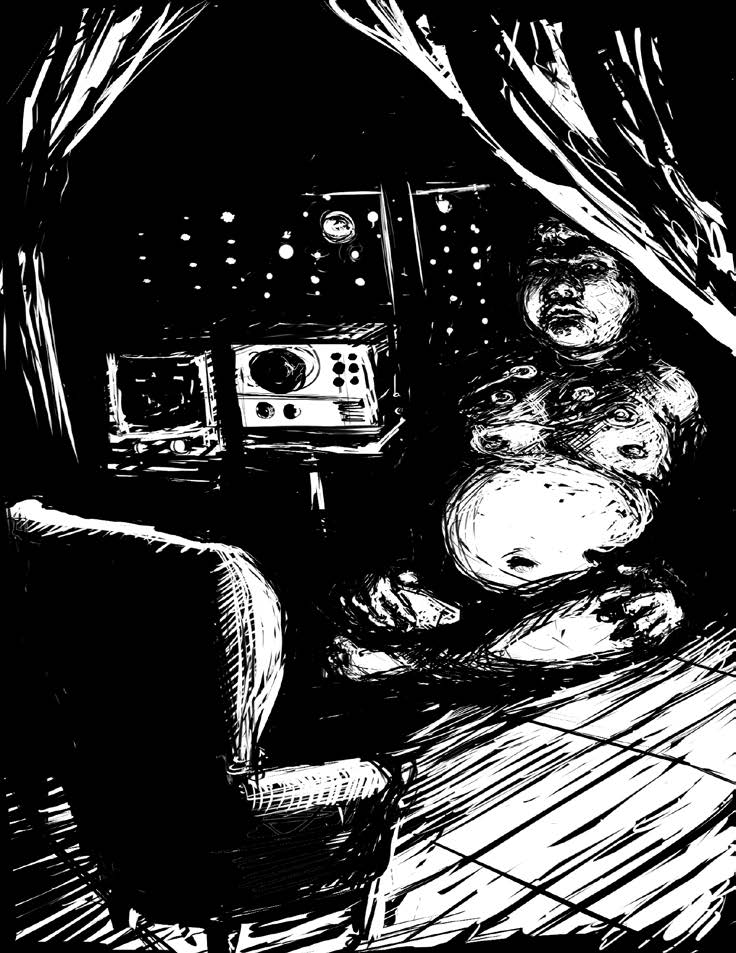 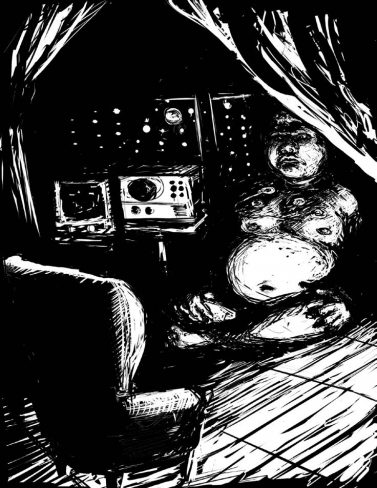 I wake up in a dark room. I’m on my back but I’m not too hurt. Wait, scratch that. Oh boy, my lower neck feels tight, like I’ve been sleeping upside down, resting my whole body weight on it. I’m on a mat of some sort of gym equipment-type, like wrestlers would train on. I check my pockets and none of my stuff is there. I immediately think about the cash and get up quick to my knees and spin around, and that’s when I see the guy tied to the chair under a small light, in the far end of the room next to the video monitor. He’s not just any guy, though, and as I focus in on him, I see who he is. He’s watching me as his people do. They see everyone the same way, these poor bastards, but it’s their job. Right then, the monitor comes to life as well. I see a face I recognize but can’t quite place, and then it hits me real quick where the hell I am: right in the middle of a big mess.

It is the leader of the Ganderthals, Tobe Wannason—aka The Operator. The Operator was his online handle but he gave it up and outed himself, at the same time adopting a completely isolated existence. He has never been known to be in public, ever. He lives his life in seclusion, online. He leads the Ganderthals behind these walls, or from behind whatever walls he’s behind on the other side of the camera. Right then, the tied-up fellow speaks up: “Great. Maybe now that you’re here, Harry, I can figure out what the hell is going on.”

“Officer, please stop speaking. Hello Harry. We’re quite sorry about the circumstances of how we brought you here, but we had to act quick for your safety and ours. I believe you know Officer Hallis.”

“Well, I can’t say I’ve ever met him, but yes, I know who he is.” I say. The officer just stares. He seems neither guilty nor repentant. It’s almost like he’s on duty and has a gun trained on a criminal, waiting for them to make their next move.

“Yeah, I know you, Harry. We all know who you are. If you are as fair as you say you are, you’ll make sure you let them know where I am when you get out.” His voice starts to waver with a bit of fear and rises quite a bit. “These terrorist bastards got the wrong idea; they can’t just pull street justice on a cop like this. They’ll never get away with it. YOU HEAR ME!? YOU’LL NEVER GET AWAY WITH THIS!”

“Never get away with what?” Tobe asks flatly.

“Kidnapping, for one!” Harris squawks. “That’s a crime.”

“Officer, you’re going to talk to us about criminal conduct?” Tobe retorts and quickly gets the silence he wants.

“Well, what the hell do you want with me? Where’s all my stuff ? What’s this have to do with me and Norma?” I ask of The Operator. A door opens and a faint pink light peeks into the room.

“Go through that door, Harry,” says Tobe, and the monitor goes black. I get up and wearily get my balance. A black silhouette peers from behind the door, a female shape, very frail and thin, with a long blonde ponytail hiding from beneath an all black outfit. She watches me steady myself. She has a tray of food and an AK-47 on her shoulder.

“Same drill, pig! I put the food on the tray, the tray goes in front of  you and you eat like a pig. Any funny stuff and you die like a pig.”

A door on the other end opens and another figure stands there. “This way, Harry,” the voice says. As I make my way, I hear a buzz getting louder, people talking, like an extremely busy office.

I walk through the doorway and see a command center of sorts, but there’s no military uniform, just a hodge-podge of people, some in all black, some looking like they belong in a fashion or music magazine, some looking like regular types. There are monitors on the walls of live video feeds from around town, obviously tapping into the existing police department and various businesses CCTVs. I realize the person at the end of the hallway has been behind me, silently letting me take it all in. I try to turn back around to look at them but my head is stopped slightly by a gentle, yet firm hand that also motions forward. “This way, Harry, through the large door.”

It’s a garage door, about 14 feet high, like the ones you’d see on the outside of stores in bad neighborhoods that lock up overnight. It’s been either hastily or crudely installed. As I walk though the big doors I feel everyone now watching me. The garage door closes ominously behind me. I’m in another dimly-lit room with a large red curtain splitting it in half. Suddenly, the lights come on and I’m given a rather comfy leather wingback chair to sit in. The Operator speaks from behind the curtain and his voice is very loud: not amplified, just booming. “Again, Harry, we apologise for the way we’ve brought you here, but we do want you to know we wish you no harm.”

“Well, I appreciate that, and I do realize you are either sharing an amazing amount of trust… or you are about to do with me something that would render my memory of this place useless.” The curtains slowly draw open and reveal a good bit of equipment I don’t recognize—medical, scientific, electronic—all connected to Tobe Wannason, who by all accounts has done what is so unbelievable but proves all the rumors of his genetic experimentation to be true. He has made himself  two-and-a-half times larger than he was. I’m both awe struck and amused. Before this, he was a five-foot tall oaf that weighed a thick 160 pounds. Now I sit and stare at him at his twelve foot tall and what—350, 400 pound—self, and he still looks oafish and harmless, like a big giant baby-faced, pudgy kid. He sees the amusement on my face and a flash of annoyance goes across his. He turns beet red and quickly gets to business, his color and demeanor changing instantly. He nods to my escort.

I turn back to face them and I’m met with a firm slap on the face.

“Turn around,” the escort says. I believe them to be male, but the hand that slapped me felt frail, small. I turn around; a large white envelope is placed in my chest and I grab it.

“These are your belongings,” Tobe says. “You’ll find everything is there.” He looks at me with a strange grin, obviously curious about the wad of money I “inherited” earlier in the day.

“We trust you, Harry. You’ve done very good things in the past for like-minded brothers and sisters, and we simply want to warn you. Be very careful: your boss

is playing a dangerous game right now, and he’s using you as one of his main pieces. He is being paid, and we’re not sure yet exactly by whom, but we are sure he is involved in some very shady and questionable relations, politically and legally,” Tobe finally says.

The Ganderthals have proven to have their hands and computers on more information than anyone gives them credit for. Hearing this about my boss… well, let’s just say it doesn’t come as such a surprise. When it comes from a man who has made himself over twelve feet tall and is the head of a growing global body of information and intelligence, it strikes a nerve. “What did you do with Norma?” I ask.

“We don’t know, Harry. She wasn’t there when we arrived,” Tobe says, looking away. “We’ll be watching you, Harry, but unfortunately we can’t offer you any safety.”

“We’ll be in touch.” He nods towards the escort and everything goes black again.