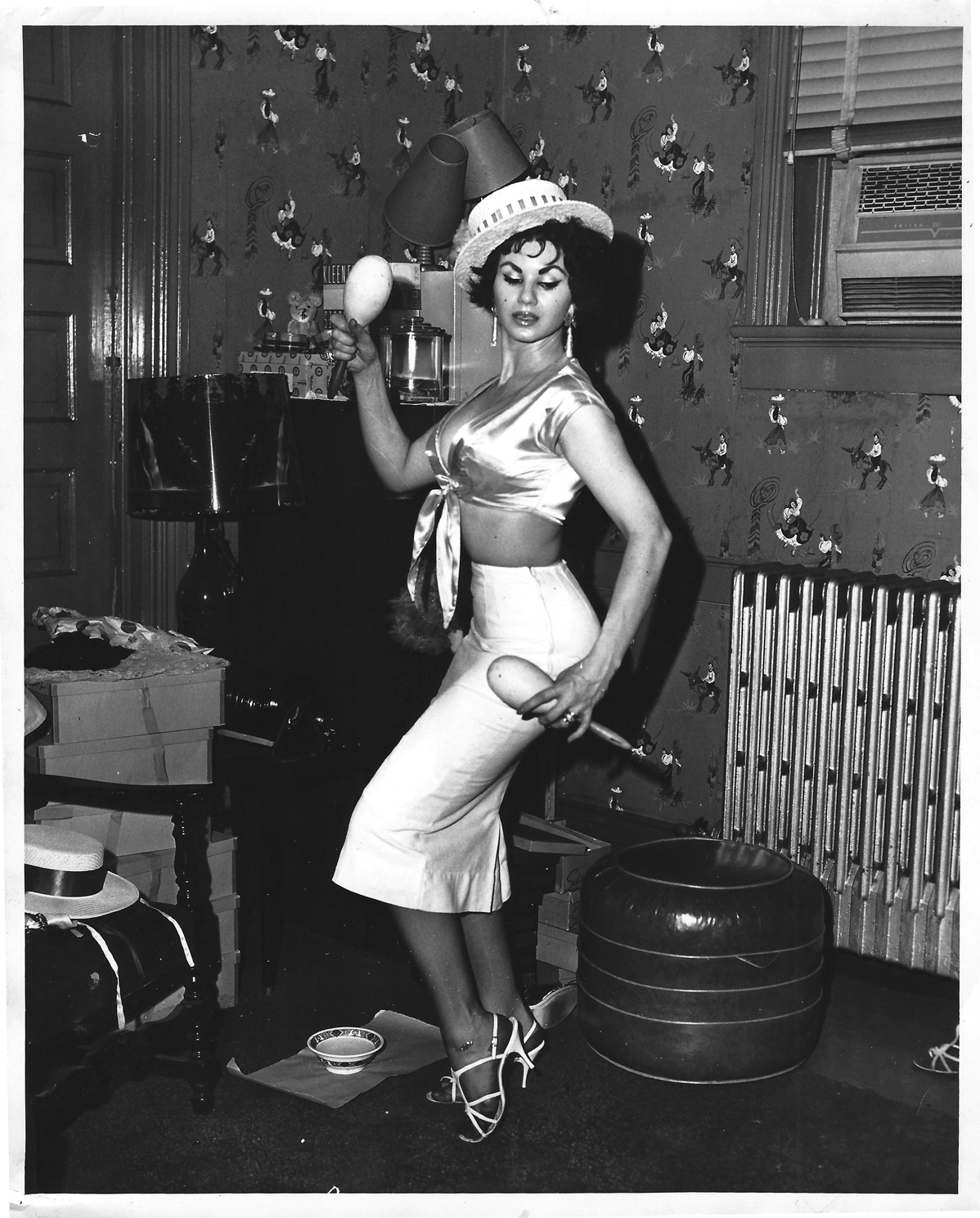 Navigating bewildered tourists and bustling hustlers on Bourbon Street to the Saint Louis Street entrance of New Orleans legend Chris Owens’ tranquil home is its own small journey. I’ve been summoned here for a walkthrough with her niece to see if the company I work for, The Occasional Wife, will manage an estate sale to liquidate items from Owens’ home and business. Scrolled iron doors open into a 20th century rococo rhapsody in white, black, gold, and reflective surfaces. The lady of the house is no longer present, but the property is laden with clues about this iconic person.

Organizing estate sales is an intimate task. We work inside homes of persons transitioning through the big life stressors—moving, death, divorce or separation—sometimes relating to very tragic events. There’s a lot of empathy involved even if the occupants are not present. Demographically, we work for a wide range of clients, and like housekeepers, we see many things of a personal nature while sifting through closets, drawers, and cabinets. Our curiosity about the material culture inside other peoples’ homes often gets broadsided by logistical challenges of preparing the contents for public consumption on a short timeline, but once in a while we get into an extraordinary property that encourages contemplation.

Chris Owens died on April 5 at the age of 89 and her family had just made a deep purge of her residence and club towards listing the property for sale. Some high-profile belongings went to Neal Auction, yet enough remained to still get a sense of this magnetic and enigmatic person. Our challenge was to organize an estate sale off-site, to preserve confidentiality in memory of one of New Orleans’ most recognized ladies. Through preparing Owens’ things for sale, I learned more about her in death than I had known while she was alive.

Born Christine Joetta Shaw on a cattle ranch in West Texas, she moved to New Orleans in the 1950s to pursue her nursing career, eventually marrying car dealer Sol Owens. Sol was an adept Latin-style dancer, and he coached Chris for their bi-monthly visits to Havana, Cuba, where she perfected her moves onstage at the famed El Tropicana club. As nightclubbers in New Orleans, the couple attracted so much attention that Sol was inspired to purchase their first nightclub in 1956, Club 809 on Bourbon Street. Here, Chris evolved from “couple dancing” with Sol to star performer onstage as “Queen of the Cha-Cha.” Seeking to expand their operation, Sol and Chris purchased the building at 500 Bourbon Street with a business partner in 1967. Chris and Sol could live, have tenants, and establish the Chris Owens club at this new location. The club was an immediate success, and Sol and Chris bought out the partner one year later. Chris continued to perform at her club for the next 55 years.

After Sol’s death in 1979, Chris could have lived off the rentals, but she kept dancing. Today, the club’s marquees stand intact with collage-style hall of fame photos of her looks through the decades, dancers and band, Sol, subsequent partner Mark Davison, conga lines, and the “Latin Music Club” header. Inside the club’s dressing room, we picked up a 1960s French provincial suite of vanity furniture in white with bubblegum pink trim to sell. The drawers contained rhinestone pieces with bits of glue, remnants from the costumes and accessories that Chris would design and embellish. An I “heart” St. Jude sticker was pinned on the wall alongside other devotional certificates and faded Post-its with notes. Two life-sized photo cutouts of her from the Chris Owens Easter Parade lay on their sides as icons in repose, silhouetted in curves with cascading hair and indulgent bonnets. On the floor were bits of feathers as if she’d just finished her show.

While photographing her possessions for inventory and promotion, an expansive view of Chris Owens emerged. A closet stuffed with genuine and faux furs in natural and candy-colored hues reflected her over-the-top feminine and seductive public persona. Her bed was a king-sized field of cream and pink like the dressing room furniture, extravagantly draped in curvy scallops with quilted rosettes. But the property also revealed her measured side, demonstrated by a pair of overstuffed chaise lounges and a sectional sofa reupholstered multiple times in white synthetic leather.

When Owens’ niece, Sherry Costello, added old photos to our stockpile, my coworkers and I delighted in piecing the Chris and Sol timeline together: their nightclubbing, vacations, and establishment of the two clubs were all here in black and white. A laughing Chris and her Maraca Girls outfitted in tight skirts, cropped shirts, and big hair cha-cha through the club. They entice “Maraca Club” members—outfitted with their personalized maracas—to join in, showing us the roots of Owens’ signature emphasis on audience participation.

The nightlife views and glossy promotional 8×10 photos of young Chris reveal the continual cultivation of her appearance, poise, dance moves, and audience engagement. As significant records of such a renowned performer, the photographs seemed suitable for a local archive, and I approached The Historic New Orleans Collection. Their receptivity energized the Owens family to donate other important objects from her history, such as sets of maracas like the ones in the photos, guiros (Latin percussion instruments), a tambourine, additional photographs, and official distinctions such as a key to the city of New Orleans awarded by Mayor Nagin, and a Louisiana Treasures Hall of Fame plaque.

It is noteworthy that there is not much biographical writing on someone of Chris Owens’ stature and longevity. With the outpouring of adulation when she passed, excitement over her flamboyant bonnets in the Easter Parade, or the “Chris sighting” stories about her trips to the Metairie Whole Foods we heard at her estate sale, one would think there would be a biography or two.

I saw her act five years ago. It was a high-energy show with a tight live band, with some Latin dance and active audience participation (I, too, got onstage). Led by Chris, the gracious hostess-star, it was not so different from those 809 Club photos from the 1950s and ‘60s. As a club owner and lead entertainer on Bourbon Street, Chris Owens outlasted her contemporaries Pete Fountain and Al Hirt. Unlike them, however, she did not tour and her home was literally attached to her work as part of the same labyrinthine building. Sherry had shared that Chris refused offers to tour or to perform on Broadway. Instead, Chris Owens preferred her own stage.

When the estate sale was announced on social media, the response was electric. Fans left weepy, even demanding messages, feverishly imploring to pre-purchase mementos. The furs, the bronze figural table that resembled Chris, and her barware were hot items. Even mundane electronics and used hairbrushes were transformed into sacred relics in the eyes of her adoring public. My own purchases included a 10-foot potted yucca tree, a 1950s promo photo of Chris with maracas, and a pair of oversized rhinestone earrings in teal and purple. Everyone wanted to have a piece of her magic. Distributing Chris Owens mementos into homes and archives became an important mission for us, as a tribute to her 64 years as an integral New Orleans entertainer. 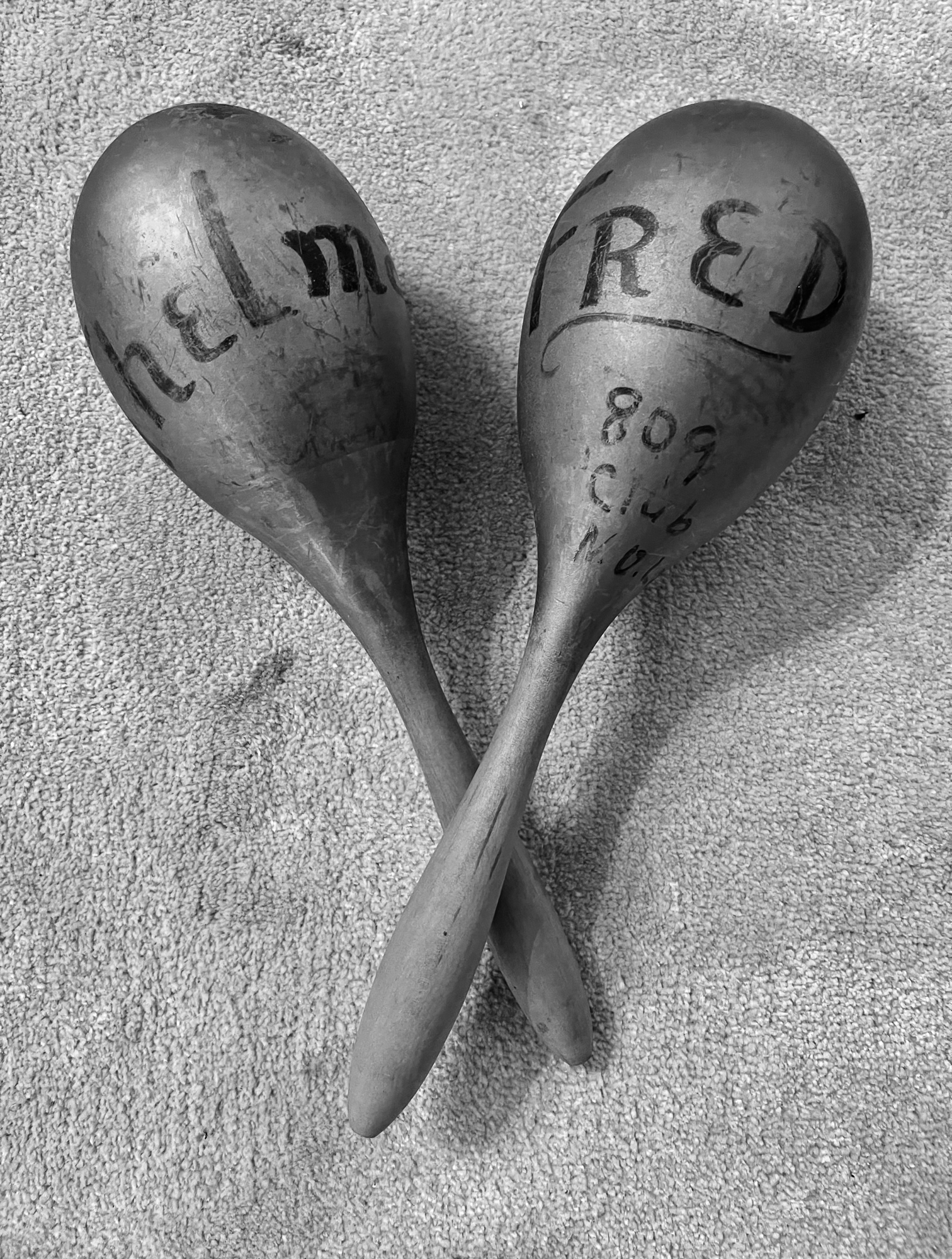 Top: Photographer unknown, believed to be Cuba in the early 1950s.
Bottom: Personalized maracas from the “Maraca Club” at Chris and Sol Owens’ 809 Club. Photo and maracas are part of a group of items being acquired by The Historic New Orleans Collection.