By Steven Melendez May 2021 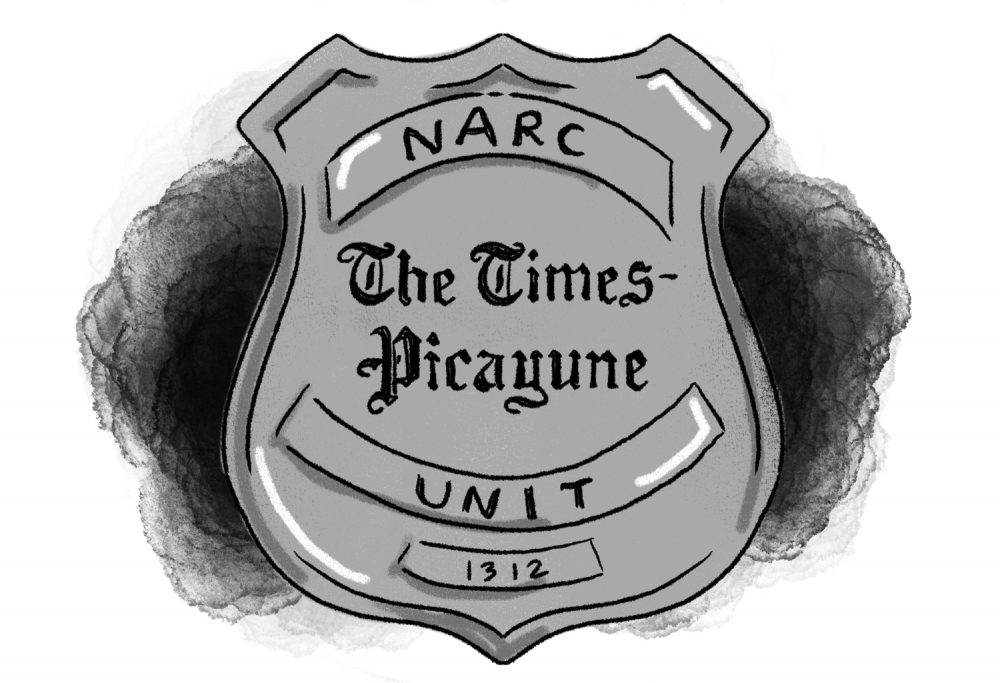 Forty years ago, reporters from The Times-Picayune visited a set of Metairie businesses and, apparently finding the services on offer were as they expected, called the police.

A story bylined only to the paper’s “East Jefferson bureau” reported that so-called “Oriental massage” parlors offered “sexual intercourse or other sexual favors,” citing the experience of “reporters posing as customers.” The article, with the headline “5 massage parlors offer sexual favors,” doesn’t point to neighbor complaints or abuse of workers. The news being reported was simply that sexual services were available in a handful of businesses in the Fat City nightlife district.

The paper’s editorial stance was essentially that the businesses were self-evidently up to no good. A series of articles cited the response of Jefferson Parish officials1. Specifically Parish President Joseph S. Yenni, Sheriff Harry Lee, District Attorney John Mamoulides, Parish Councilmembers Ken Hollis and Willie Hof, according to Times-Picayune reports from October 13, 1981, who claimed they were first made aware of the nature of the massage work by the initial Times-Picayune article. A cartoon in the paper depicted then-Sheriff Harry Lee as a security guard asleep, mouth agape, in a booth surrounded by massage parlor signs. Lee had told the paper that pursuing sex workers, people he said were immigrant women trying to earn a living, wasn’t a priority of his office compared to arresting “dope dealers, rapists and people who point guns in your face.” Other local politicians scrambled to react to the reports and vowed crackdowns on the establishments.

At least one reader, who counted the number of times columnist James Gill used the word “Oriental” in coverage of the establishments, suggested in a letter to the Times-Picayune that the reporting was a racially and politically motivated jab at the Chinese American sheriff.

To be clear, the late Sheriff Lee was no angel, as men of his political bent like to say. He was frequently accused of anti-Black racism, saying things like “we know the crime is in the Black community” in justifying biased policing. A letter he wrote to the paper to defend his record pointed to rising levels of “pandering” and “attempted crime against nature” arrests, and he lent his support for an ordinance to “control the massage parlors in a more effective manner than a law enforcement effort.”

Any reluctance by the sheriff to take on the massage parlors was quite likely a matter of pragmatism as much as principle: Lee and then-Jefferson Parish District Attorney John Mamoulides both told the Times-Picayune that limitations of state obscenity laws made it difficult to convict massage parlor workers of any crime for the alleged activity. “If there is a law against stealing oranges and I steal apples, I can’t be convicted under that law,” Mamoulides said at the time.

In other words, despite the implication of the newspaper’s reporting and editorializing, it wasn’t clear to Jefferson Parish’s chief prosecutor that anything illegal was going on at all. But Mamoulides vowed he’d lobby for amended state laws to clearly ban sexual activities at the massage parlors.

It’s hard to know decades later exactly why the Times-Picayune was motivated to probe the massage parlors, but politicians and developers of the day certainly had visions of cleaning up Fat City, where they were located. The nightlife-rich neighborhood had developed in the 1970s as what was seen as a more homogenous suburban alternative to the French Quarter. “For one thing, there are few hippie types in attendance,” wrote a Times-Picayune journalist in 1974, mocking the scene’s uniformity. “And the clientele is almost all white.” By the 1980s, the area’s nightlife drew a more diverse crowd, and landlords and Jefferson Parish leaders began to dream of gentrifying the sector for office buildings, as a second central business district for the region. Massage parlors staffed by non-whites operating openly likely weren’t part of that plan.

It wasn’t the only time a local daily would attack sex workers in an area prized by developers: In 2013, the Times-Picayune found “women in high heels and short skirts flag down passing cars, selling themselves for as little as $50” on Tulane Avenue, in an article that discussed city officials’ plans for a “renaissance” on the street and asked readers to share “thoughts on whether the new medical district will be the key to turn the area around.”

Police regularly pose as johns to initiate raids and stings, sometimes even after receiving services from the very sex workers they then arrest. The police, not legislators, for all practical purposes, determine what constitutes crime in society. A police encounter is often the first step on the path to being declared a criminal, and cops select who makes the cut. So it is noteworthy that in this case, the police were pressured to act not even by civilians (again, there were no indications that resident complaints prompted the Times-Picayune to investigate) but by the press.

But whatever the motivation, the reporting and editorializing was part of a long history of the Times-Picayune and the papers it merged with taking a stereotypical, sensational, and censorious tone toward sexual labor. In the 1970s, the States-Item, which would merge with the Times-Picayune in 1980, made light of strippers protesting restrictive laws as making an “unusual daylight public appearance.” It’s unlikely the paper would characterize the self-advocacy of union teachers or Teamsters as novel or amusing.

In 2017, reporters for the Times-Picayune described “a willowy dancer” with a “tongue ring” offering what they called “illegal touching and prostitution” at a Bourbon Street strip club, apparently taking at their word the descriptions of undercover agents of the Louisiana Office of Alcohol and Tobacco Control. That article was part of a series that extensively cited Covenant House, a Catholic Church-linked organization that claimed widespread illegalities on Bourbon Street, in accusing the venues of being linked to sex trafficking with little evidence. Even then-ATC Commissioner Juana Marine Lombard acknowledged at the time that no arrests were made for human trafficking.

The reports didn’t come in a vacuum. They were followed with allegedly abusive police raids where clubs were shuttered and strippers were detained, at times having their legal names read out by police in front of colleagues and customers, amid a push by city officials to restrict the venues, which have operated on Bourbon Street in various forms for decades.

Even last month, an opinion piece by James Gill (who is still at the Times-Picayune | Advocate) about state Rep. Mandie Landry’s push to decriminalize sex work drew criticism for its concern-trolling about the health risks and mental toll of sex work, portrayed as concern for people he referred to as “hookers” throughout the piece.

In short, the newspapers of record that have long taken a laissez-faire-le-bon-temps-rouler attitude toward other vices in the Crescent City and surrounding state have treated the mere existence of sex work in the region, and any de facto toleration, as a matter worthy of sensationalism and condemnation.

In 2018, the Times-Picayune editorial board admitted fault, looking back at a 1918 editorial asserting that “Jazz’s ‘musical value is nil’”—not quite an apology, but an acknowledgement through the clarity of hindsight at how racist and preposterously wrong that take was. But we have not seen that same self-reflection or accountability when it comes to the decades-long series of overtly racist and misogynist articles that incited criminalization of working people. Justice by its very nature is delayed but now certainly seems like a good time for a reckoning. The recent murders of eight people, mostly Asian American women, in Georgia massage parlors are not an aberration but the most recent episode in a legacy of violence. Attacks on Asian massage parlors, sex workers, and people (usually women, particularly transwomen, particularly Black transwomen) presumed to be sex workers have persisted in the United States since at least the 1800s. It took the Times-Picayune a century to admit they got it wrong on jazz. The sensational hit pieces the paper ran on Fat City massage parlors, culminating in material harm, occurred just 40 years ago. There are likely people living here to this day who were impacted. How long will the Times-Picayune wait to take accountability for its role in terrorizing working people?