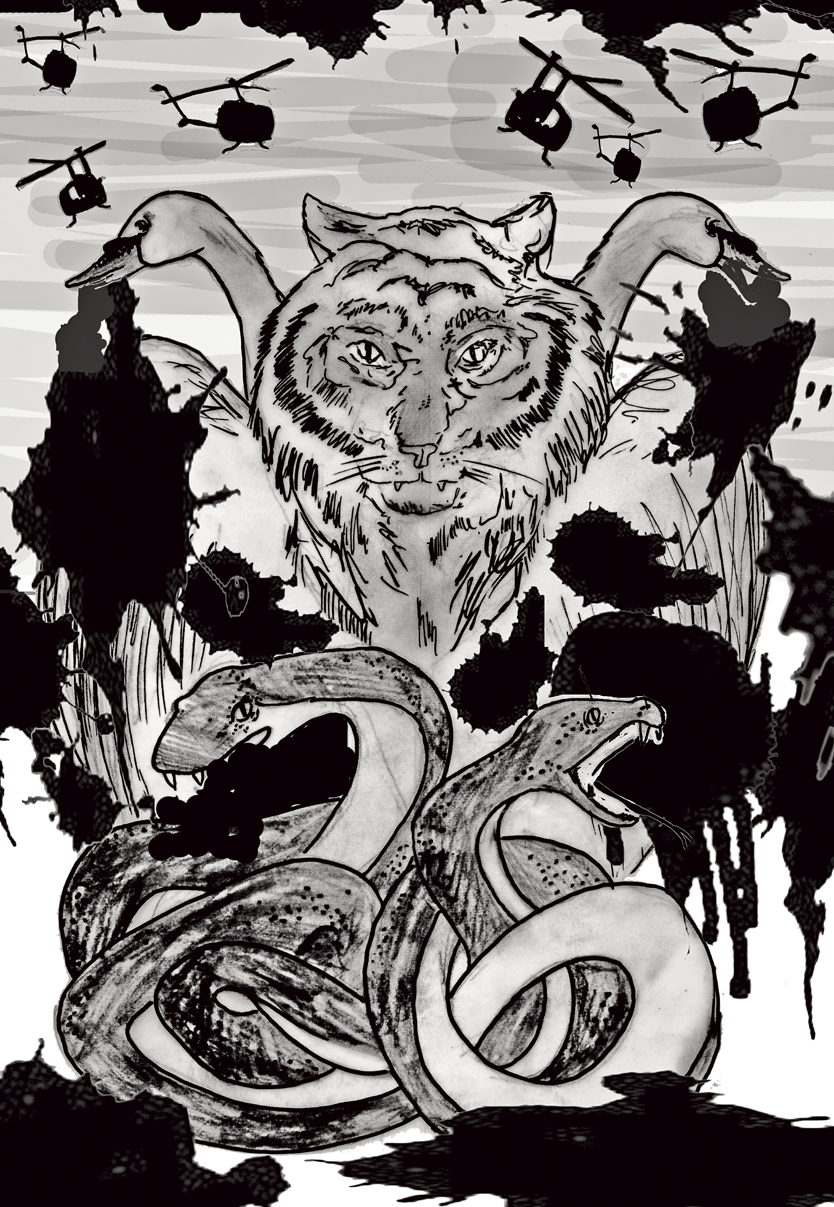 TigerSwan, LLC—the same private security firm that targeted protesters at Standing Rock—has set its sights on Louisiana, and the only technicality standing in its way is a small state office in Baton Rouge. The firm is Energy Transfer Partners’ hired gun; and in Standing Rock, it used military-style surveillance tactics that weaponized law enforcement and the court system to suppress protests and advance the Dakota Access Pipeline (DAPL). TigerSwan, last valued at $35 million, is a private security company with operations in Iraq and Afghanistan. It has already been hired by Energy Transfer Partners to work in North Dakota, South Dakota, Iowa, Illinois, and Pennsylvania to monitor pipeline projects in those states. As the Bayou Bridge pipeline nears construction here, activists are taking note.

While TigerSwan’s permit has been denied, the Louisiana Department of Environmental Quality already issued one major permit for the Bayou Bridge Pipeline. The final permit standing between Energy Transfer Partners and the pipeline is still pending and could be released by the Army Corps of Engineers at any moment. In November, Energy Transfer Partners promised investors that construction on Bayou Bridge would start by December and that oil would flow by the summer of 2018, indicating that the company believes its final permit, the Section 408 from the Corps of Engineers, is imminent.

In Louisiana, fusion between oil and government is just business as usual. So it was a shock when in June, the Louisiana State Board of Private Security Examiners denied TigerSwan’s license to operate in the state. When asked about TigerSwan’s pending license application, the director of the board, Fabian Blache, told me, “Their license application is not pending. It’s denied.” He cited the company’s illegal operation and licensing issues in North Dakota. In addition, Blache said the company essentially lied on its application about their legal issues in North Dakota. The application asks whether the company has ever had “any work credential suspended… or otherwise restricted by any state or authorizing agency at any time.”

Last September, Democracy Now! captured footage of private security guards releasing attack dogs on Dakota Access protesters. “Ma’am your dog just bit this protester,” journalist Amy Goodman says to a dog handler just before the situation escalates and the dogs attack further. “The dog has blood in its nose and its mouth!” she says, “Why are you letting your dog go after the protesters? It’s covered in blood,” she yells. 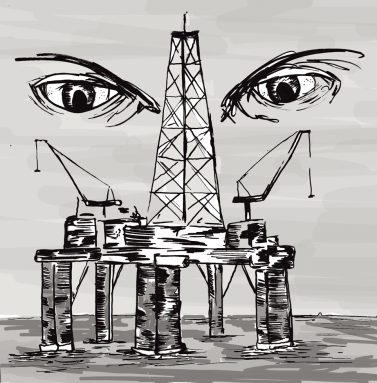 While TigerSwan was not responsible for the dogs (an Ohio-based kennel is under investigation for the attacks), TigerSwan was hired by Energy Transfer Partners shortly afterward to corral security efforts among at least seven different private security companies along the pipeline. What ensued was less bloody but more insidious. In an internal intelligence update last October, the company wrote about how it would deal with protesters: “The use of force or death of a protester will result in the immediate halt of DAPL operations, which will likely permanently halt DAPL operations.” Instead of using force, TigerSwan used social media and federal Fusion Centers to infiltrate camps, pinpoint protesters as targets for law enforcement, and advocate for higher bails once people were arrested.

That strategy came to light in more than 100 internal TigerSwan documents leaked to The Intercept and Grist, which offer a rare look at how a $51 billion pipeline corporation manipulated a democratic process using a hired security force. One leaked TigerSwan “intelligence update” recounts a meeting between the company and the North Dakota Bureau of Investigation “regarding video and still photo evidence collected for prosecution.” The document says TigerSwan would “continue building Person of Interest (POI) folders and coordination with [law enforcement] intelligence.”

The leaks demonstrate how Energy Transfer Partners, through its contracted security partner, morphed into a militarized surveillance unit embedded in a ring of government law enforcement. One TigerSwan situation report from September 12 documents the placement of a company liaison inside of a law enforcement Joint Operations Center. Another shows an email from a Cass County Sheriff’s Deputy to the FBI about a woman they labeled as a “strong Shia Islamic.” The officer wrote that the information came from “company intel” inside the camp.

The kicker in all of this is that TigerSwan did not have a license to operate in the state of North Dakota. As firmly embedded as it was in the civic fibers of that place, TigerSwan had not been given permission to work there by that state’s Board of Private Security—and was therefore operating illegally. When TigerSwan finally applied to work in the state, the board took issue with the failure of its founder and chairman, James Reese, to disclose his criminal history. Reese, an Army Delta Force veteran who held high level positions at Blackwater, was arrested for assaulting a woman in 2015 and had a restraining order filed against him in 2012. This summer, shortly after the leaks were published, the North Dakota Private Investigation and Security Board filed suit against TigerSwan and Reese. And in October, four Pennsylvania residents filed a lawsuit in federal court against TigerSwan and Energy Transfer Partners for surveillance and information gathering abuses.

This summer, when it came to light that TigerSwan was applying for a permit to work in Louisiana, it felt at first like just another wallop of industry that one is accustomed to here. But still, the prospect of that kind of influence by a petrochemical company in a petrochemical state, where law enforcement already incarcerates more people than anywhere else on the planet, is terrifying. One TigerSwan report from February of this year reads:

While we can expect to see the continued spread of the anti-DAPL diaspora… aggressive intelligence preparation of the battlefield and active coordination between intelligence and security elements are now a proven method of defeating pipeline insurgencies.

In the grand scheme of this eroding state, the impact of TigerSwan’s license denial seems exceptionally small. But there are indications that TigerSwan has already been operating in South Louisiana. Earlier this year, a seemingly unremarkable public comment during a Bayou Bridge hearing in Napoleonville turned out to have a TigerSwan connection. A silver-haired man in a suit took the mic during the public commentary period and introduced himself as a 34-year veteran of the military. “I have spent most of my life on the edges of the universe where bad things occur,” he said. He asked, “What do China, Russia, Saudi Arabia, and the United States have in common?” (someone in the audience yelled “Dictatorship!”), and the man proceeded to make the case for domestic security through energy independence.

Instead of using force, TigerSwan used social media and federal Fusion Centers to infiltrate camps, pinpoint protesters as targets for law enforcement, and advocate for higher bails once people were arrested.

Cherri Foytlin, a central organizer against the Bayou Bridge Pipeline, told me, “I’m sure someone’s working here, ‘cause I’ve seen people taking pictures from cars, and I’ve seen things to know that someone’s been hired and given some money to harass or intimidate or generally know the whereabouts of people involved in this struggle.” Photographers have followed her on the interstate and in the parking lot of her local bank with her two kids. Someone posted photos of her house online. And in July, an anonymous person reported Foytlin to the Department of Children and Family Services for neglect of her children. A series of videos targeting and defaming her were subsequently posted online. An in-depth report of those videos in Paste Magazine linked the work to TigerSwan’s “reputation initiatives.”

Foytlin said, “Just ‘cause TigerSwan’s not gonna get a deal here, which I really don’t think they’re going to at this point, it doesn’t mean that other groups won’t be brought in or other people paid. We’re being realistic about that.” When asked what kind of effect the surveillance has on her, she said, “It is creepy as hell.” But in a way, she is glad her opposition is getting noticed. “It’s a sign that we’re doing good. We’re talking about 700 different waterways. We’re trying to protect all these cultures and all these people that keep getting crapped on by all this industry anyway. That’s a lot.”