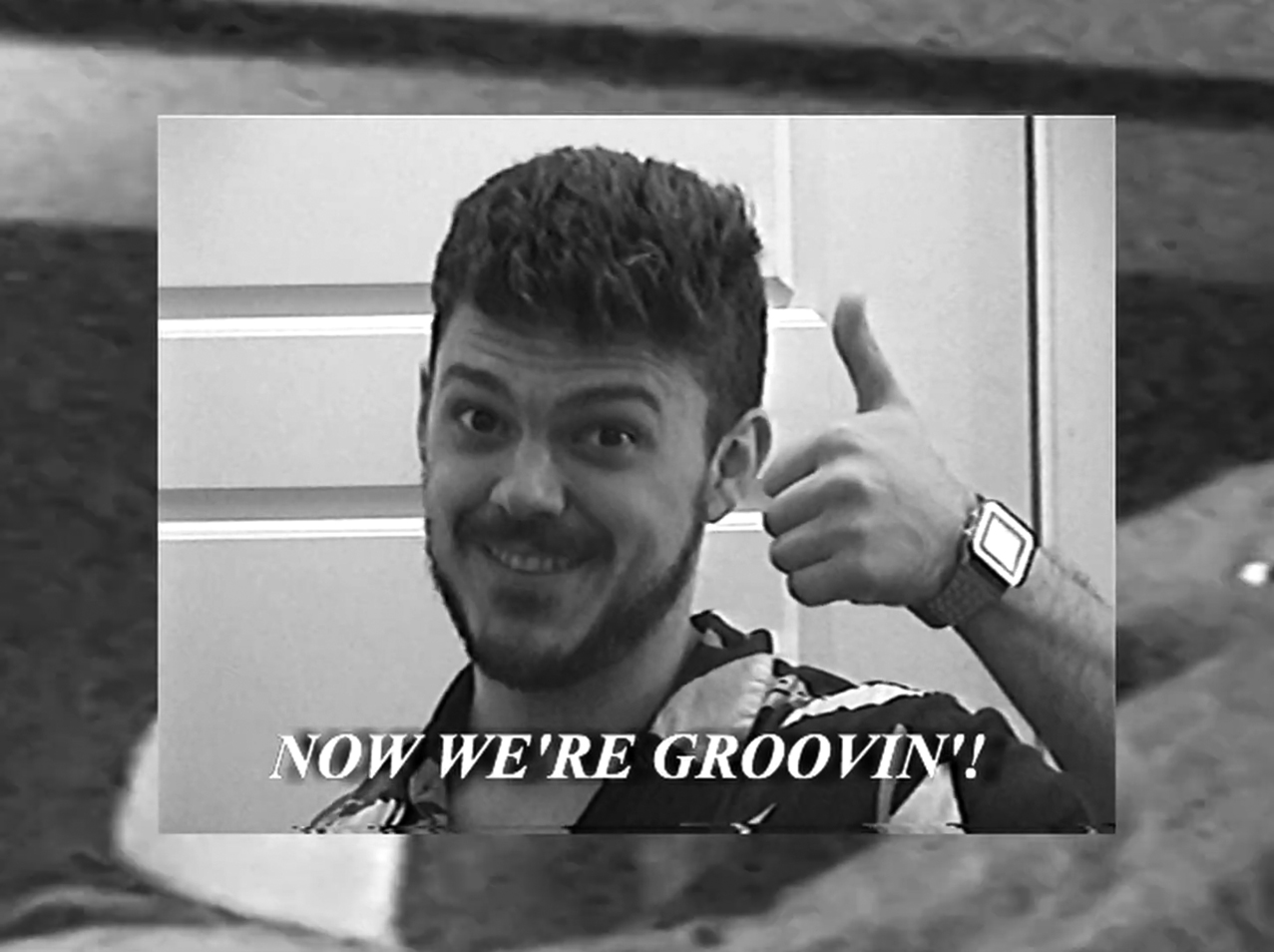 For working musicians in New Orleans these days, life is almost unrecognizable. We live in a sweaty, affectionate, social city where music venues are the hub of our connection. Rehearsal rooms, recording studios, cramped stages—this is where our creative minds are fed and our ideas flow. Without the embrace of bandmates and live audiences, things are getting weird. On two separate occasions, once at the beginning of quarantine (back in March), and then a few months later, I spoke to the proudly weird, multi-instrumentalist/engineer Aaron Boudreaux (drummer for People Museum and GIVERS, known by MoPodna for his solo work). An Instagram or YouTube dive into MoPodna will gift you with the catchiest electro-indie pop tunes coupled with tutorials on “Anxiety Beat” drumming, some spectacular ‘90s-era clothing, a ton of lo-fi old-school video editing, and a lot of direct eye contact held for far too long. We spoke about his dog, his streaming series, his new release with Claire Givens, and the future of live music.

Tell me everything about the current status of your music.

Usually this time of year, gigs aren’t my primary source of income. Obviously, I play gigs and I play in bands, but I’m not the type of musician who’s gigging all the time and that’s the biggest chunk of my income. I have a studio and I mix music. I produce and I write. But this year, between playing with People Museum and GIVERS and doing my solo shows, I had a ton of gigs slated through this season and I was like, “Wow, this is crazy! Gigs are my thing this year! I’m a real New Orleans musician now. Look at me!” And then, yeah, all this stuff started happening and every single one of those gigs got cancelled.

Yeah, we cancelled the People Museum gigs right at the beginning, really early in March, and it felt like we were being extra cautious. So at first I thought, “Maybe I’ll have just a couple cancelled,” and then every passing day it got more and more extreme. And I get it; I understand it. You gotta be safe, the social distancing. I agree with all of it, but it sucks.

It’s kind of hard to fathom not having live music in this city. It’s so widespread and it pays for rent and food and booze for such a large swath of the population.

Yeah, we’re a tips-based economy. Our economy relies on the fact that people go out to restaurants and pay for this and that. The money gets spread around a lot. In regular towns, you find a bar and you go to that bar. But over here, people go everywhere in a single night and move the money around. It’s a crazy case study of when your city is almost entirely reliant on entertainment and clubs being packed and people flying in.

But you think online gigs might recover some of that?

I mean, obviously not entirely but, yeah. Once that last gig of mine got cancelled I was like, “Dude, what am I gonna do?” So I had posted some stuff on my Instagram story, thoughts overlayed on top of pictures of my dog; ‘cause I get it—if I want anyone to care, I have to post pictures of Bella and then type stuff. So I put my thoughts out there and I was like, “What are y’all doing? How can we support artists who are out of work?” An old friend from high school who works in software development responded, “Why don’t you do a live stream?” and I was like, “Oh my god, you’re right.” ‘Cause I have all kinds of audio gear and a camera at my house and I thought, “This could work!” I grinded it out for 48 hours, researching, plugging things in, trying things. And I finally did my first live stream on [a] Monday, of my solo music, ‘cause I had a few solo sets that got cancelled. So I was like, what if I did “MoPodna Mondays” and then eventually, I got people from my weird little corner of the New Orleans music scene to perform?

People seem to be tuning in and getting excited.

Yeah, I got a good handful of patrons, which made me think, “People really do want this. People want to have live music streamed to their house.” It’s not just an ego thing, being like, “I just want to play music and make money.” It was like, “Wow, people are realizing that they can’t go out to a concert, so how can we bring it to them?” Now that I know the solo gigs are working, next up will be studio sessions streamed from Neutral Sound Studios. As of now, I’ve got People Museum, Julie Odell, Maggie Koerner, and a bunch of other interested parties on board.

And you’re putting in safety precautions.

For sure. Because I’m itching to do this, but I want to be safe. I don’t want to put anyone’s health at risk. Since I’m the engineer, we can keep it to five or less people in the studio at one time for the live streams. For Julie’s set, which is our initial one, it’ll be solo, so it’s just gonna be me and her. Simple setup.

Talk about your sound.

When I first moved to New Orleans, I definitely came in with the wrong mindset. I was like, “I have to play New Orleans music.” But after a month of playing jazz gigs I thought, “Why am I doing this? Why would I pretend to be a jazz musician?” There are so many great jazz musicians. I need to do my own thing. I feel like people think that New Orleans is a “New Orleans Music” city, but really it’s just a music city. There’s so many different pockets and scenes. What I’ve realized over living here for seven years and playing with different bands is that “New Orleans Music” is the tradition, the roots, the history—but musicians come here because they love music. Once I really started producing music and going to shows—especially once I started playing with People Museum and GIVERS, who are actually my friends from back in Lafayette but have found a home in New Orleans as well—that all became obvious. New Orleans has one of the coolest indie rock and indie electronic scenes out there and there is room for more.

Tell us about your solo project, MoPodna.

MoPodna has some instrumental tracks, then some songs featuring my voice mixed with these amazing female vocalists, like Signe Krog. My newest collaboration is with Claire Givens (of People Museum). We just released a single called “Hide My Light” and there’s a video coming out in July. It’s a poppy-feeling track but it’s comprised of really janky bedroom keyboards. When the batteries go low on Casio keyboards from the ‘90s, they distort in a weird way and it’s really gritty and raw sounding. I get psyched to sample and mix that kind of thing. Then, on top of that comes Claire’s voice with its catchy melancholy. I say this every time I play on my live streams, but I can’t believe I get to play music with Claire. I can’t even believe we were born in the same state and moved to the same city and make music together.

I’m finding, with a live stream concert, when there’s a lot of energy and production put into it, people are really interested and grateful. When this quarantine first hit, the internet was like the Wild West. Everyone was streaming on Instagram and Facebook with no warning and they were just meeting up with buds and playing guitar scales—which isn’t bad, but it’s not the same as a performance. I’m lucky enough to have access to equipment that allows me to curate the feel of a real gig. There was also concern at the time that, “This is gonna kill live music. Live musicians are just gonna be live streaming all the time.” And now that all the dust has kind of settled, I think we’ve learned that that’s ridiculous.

I’ve been watching your live streams as they’ve gone on throughout the quarantine and, since you trigger loops, you’ve got this unusual circumstance of time and space to do things with your hands and hips. Your dancing is a persuasive part of the show.

Oh lord! [laughs] I’ve tried to upgrade since I’ve got the time. So I’ve included camcorder edits of interesting memories that I’ve filmed over the past year. I made this background border and all sorts of stuff and, yeah, the dancing. I had to up the game. Some people are really good at just sitting in front of the screen, singing. But in general, I feel like people want a full show. It’s not enough to accept the idea that live venues are closed and shows are just gonna suck now.

Are the live streams from Neutral Sound still happening?

Yes! Most of the artists are still on board and even when venues do open back up, I still think it’s going to be of value to have a really clean, concise 30-minute video of, say, Maggie Koerner performing with perfect audio in the studio. ‘Cause, think about it: so many of my friends back in Lafayette are like, “I really want to come to your show! What time is it? Oh, you start past 10 p.m…” Those people are gonna be able to support shows more and more because they’ll be able to watch live streams and pay covers whenever they want. I think this movement is going to open the door for more people to enjoy live music that way. This series would have been cool to do a year ago, regardless of quarantine.

You must miss being in the studio.

I do. I really do, but I’ve set it up at home where I can record live drums from my place, so I’ve been sending drum stems to people and we’ve composed online. But, yeah, of course I miss the studio. You can see on MoPodna Mondays the madness of what my home mixing room looks like. There’s a bed in there, but it’s really just a spare mattress we’ve got and I’ll never remove it because it does wonders for the room, acoustically.

Does your dog ever hang out in the home studio?

Yes! Bella is actually in my lap right now. We can’t let her climb up on high things because her legs are too short for her body. But she gets indignant when we pick her up and she growls like she’s the president and we’ve arrested her and she thinks, “This can’t be! I’m above the law.”

I’ve sampled her voice. She’s an [American] eskimo [breed], so she’s super talkative. She’s got these wolf noises that she makes and those samples have appeared in a couple of tracks I’ve put out on Spotify. Plus, she pops up all over my Instagram video edits. She even appears in shots I haven’t planned to have her in. She just roams around and you can’t tell her what to do or where to go, so there’s about a 95% chance you’ll see her in any video. 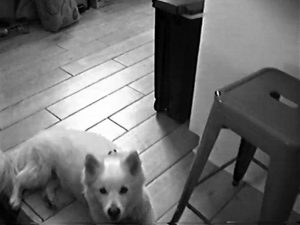 Stream the new MoPodna single, “Hide My Light” featuring Claire Givens, on Spotify. For all other Aaron Boudreaux updates and videos, check out his Instagram at @MoPodna.