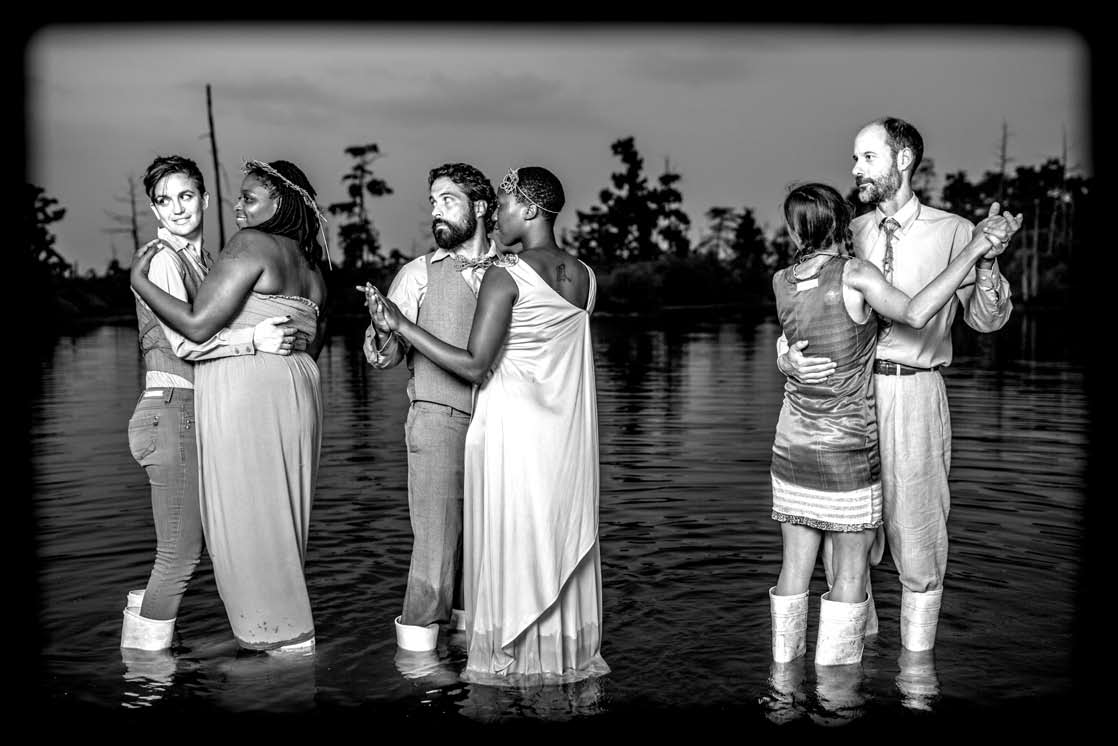 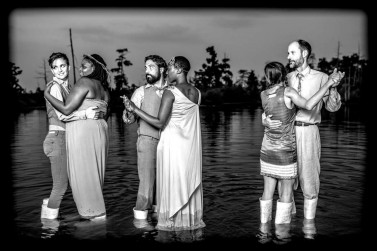 Botanical epidemiologist Carol Carl delivered an urgent message at this year’s Earth Day festivities on Bayou St. John. Dressed in all white, she nervously explained to a crowd gathered in the children’s tent that a terrible tree-born disease was beginning to spread to the human species. As Dr. Carl’s story unfurled, it became clear that she was an emissary from the future bearing warning of terrors to come. She revealed that she had never seen a bird—there are no more birds in the future—and that the root of the disease was Corexit, a chemical dispersant used after the BP oil spill in 2010. It slowly dawned on the audience that Carol Carl was a fictional character, skillfully portrayed by Hannah Pepper-Cunningham (of performance company Mondo Bizarro). But for a moment, they sat transfixed and a little concerned that something truly horrible was taking place. Pepper-Cunningham is one ensemble member in Cry You One—a site-specific  performance project and digital platform from Mondo Bizarro and ArtSpot Productions—that tells stories about Louisiana’s rapidly disappearing coastline and coastal communities.

Back in 2010, crowds gathered at dawn and sunset in City Park to witness  Loup Garou, featuring Nick Slie (also of Mondo Bizarro) as the title character. It told the story of one mythical creature—a Cajun werewolf—dancing, howling and rowing his pirogue through the swamps of South Louisiana, against the backdrop of a rapidly changing environment. Slie is also an instigator of Cry You One, which completes a trilogy about environmental issues in South Louisiana. In Cry You One, the story zooms out from the individual narrative of Loup Garou and the land itself becomes the starring character.

To collect these stories, ensemble members have engaged in a process of deep listening around the state, casting a wide net for subjects ranging from scientists and environmentalists to fishermen, tomato farmers, community organizers and even the former chief of the United Houma Nation. Pepper- Cunningham was moved by “how deeply and differently all the people that we’ve talked to… know and understand the land and what it needs with a complexity and nuance [that is] really hard to manufacture.” She notes that existing processes for civic engagement do not take this knowledge into consideration and that these voices must heard.

Monique Verdin, another ensemble member, was struck by a specific conversation she had with Mark Davis, director of the Institute on Water Resources Law and Policy at Tulane, who described the foolishness of looking to the past for solutions to our current environmental problems. After reflecting on their conversation, Verdin observed that “dredging was what got us into this mess and dredging is now being shouted from people’s rooftops [as a solution].” While she agrees that dredging has to be part of the solution, Verdin points out that it’s not sustainable in the long term. 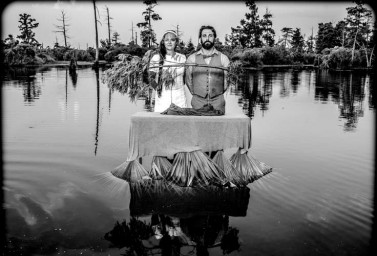 Audiences who attend Cry You One at the EJ Gore Pumping Station (in St. Bernard Parish) will participate in a roving spectacle, at turns somber and joyful. Although there are echoes of the second line in this form, Verdin insists that Cry You One is not a funeral. While she says there is an element of “communal mourning,” there will also be celebration and the generation of solutions.  Cry You One is part parade and part nature walk, at the end of which the audience is “brought into a collective visioning space.”

For Verdin, stepping into the power of her own voice has special significance. She lives two miles from the pumping station where Cry You One is being performed and describes herself as “native in more than one way.” Her family has been in Louisiana since pre- colonial times, members of the United Houma Nation, an American Indian tribe that has been especially hard hit by environmental injustice. According to the 2012 Coastal Master Plan, the parts of rural Terrebonne and Lafourche parishes inhabited by the United Houma Nation will likely be gone in 50 years. “I’m in my early 30s; I’m not an old woman,” Verdin says in a video on the Cry You One website,  “but I’ve watched the land go, I’ve watched the culture go.” Verdin is a documentarian by trade, known for her film My Louisiana Love, but Cry You One marks her debut as a performer. In a recent preview performance, Verdin delivered the last gut-wrenching monologue surrounded by dancers dressed in white. Many audience members, myself included, were in tears.

In their vision of theater as a tool for movement building, the Cry You One team echoes the Free Southern Theater, which celebrates its 50th anniversary this month (Read more here). Based in New Orleans, they created plays by and for Black people in the South with an eye towards justice. Pepper-Cunningham describes the FST members as “trailblazers in the field, forged in the cauldron of racial justice…  [Cry You One] exists in gratitude and owes a lot to the methodology of FST.”

I asked Verdin, given the sprawling scope of this production, what audience members should keep in mind when they attend next month. “Wear comfortable shoes and bug spray!” she exclaimed, noting later that the production will also provide bug spray for audience members. Cry You One is a long-term project that includes an ambitious digital platform (cryyouone.com) and a Community/Artist partnership through Alternate ROOTS, which will leverage the momentum of the live performances into community action. “Our intention is not to leave it [at the performance],” Pepper-Cunningham explained, “It won’t be in isolation. It will be in dialogue.”

Cry You One runs October 26-November 24 on Friday, Saturday & Sunday afternoons at the Los Isleños Heritage and Cultural Society in St. Bernard. For more info check out CryYouOne.com.