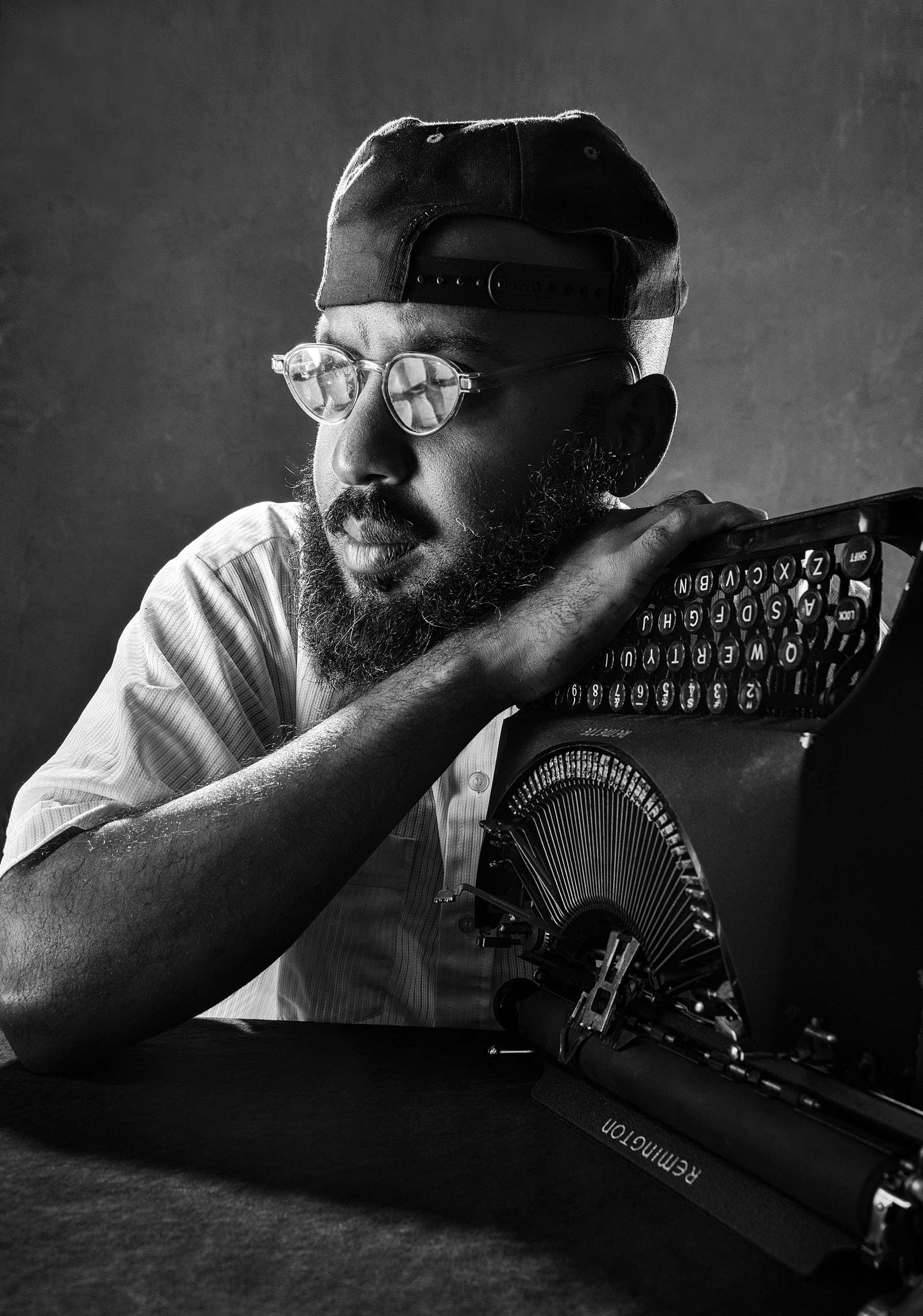 I’ve always been fascinated by what goes through the mind of an artist while they’re in the process of creation: when instinct and impulse are put on hold to allow for an openness that fosters connection and creativity. As a writer who works in solitude, to me, the process feels like a deep meditation—one that if I try to notice or observe, immediately dissipates. The idea of sharing that mental space with someone else, much less doing it in public, feels equal parts terrifying and impossible. But that’s exactly what Christian Davenport, a.k.a. Cubs the Poet, does. He’s worked with major brands like Hennessy, given TED Talks, and even had a special Port Orleans Brewing Company lager called “A Love Poem To… Black People” that raised money for Black artists in New Orleans. But Cubs, a name that stems from his boyhood mispronunciation of Kabhi Khushi Kabhie Gham, a Bollywood film he’d watch with his Indian mother, is really focused on revealing the poetry that lies within us all. Whether it’s for custom poems or for “Poetraits”—a fusion of poetry and painting—Cubs opens his mind and invites his subjects inside. Cubs grew up in Baton Rouge—he’s the city’s first poet laureate—but he really cut his poetic teeth on the streets of New Orleans, where he’s currently the poet-in-residence at the Columns Hotel.

What inspires and draws you to poetry, and how did you get started as a poet?

Let’s see. Well, I know the fundamentals. My grandmother taught me how to read and write, so it starts there. It starts, I guess, through someone who I knew loved me teaching me something she loved. But also, I think that I was just made for this. There’s just this energy. Other than my grandmother teaching me the basics of reading and writing, I’ve never had a mentor. I never studied it outside of what we’re all taught in school. I wouldn’t say I have a deep fascination with poetry, I just feel like I was born to speak from a place of love and soul. And then, I don’t know, I just came home one summer and I woke up from a dream. I was like, you know what, I think I want to write a poem. And that’s why I wrote my first poem called, “Do You Like Poetry?” And as I was writing it, I memorized it. As soon as I was done, I had it committed to memory, and then my mind was like, well what’s next? So I would set up on the street, no typewriter, just me. And as people would walk by, I would ask them, “Do you like poetry?” And if they said yes, I would recite it to them.

How did you transition from your initial experimentations with poetry into becoming a street poet, and how have you carved a career out of artistic expression?

When I was reciting on the street that one poem, people were saying, “Are you published?” or asking where they could find my work. I didn’t have a plan, and I think that helped me along the way because I wasn’t trying to funnel my talent or gifts into a direction. I just was so open that as I continued and committed to it, those things happened or gravitated to me. So, I recited that poem on the street for three months straight while I was on my summer break. And then this lady heard about me and rolled up on me and said, “Hey, can I take you to my store and have you recite for my customers and I’ll pay you?” I walked into her store and she had a typewriter on her shelf. And something in my mind said to ask her for the typewriter and not to get paid. So she gave it to me and from then on out, I would take it to the street. And what I’m realizing the more I’ve done it is that that same disconnect I had from reading other poets—I realized we are all poems, and we all have our own poetry, but we’re kind of not taught how to recognize that or speak from that space. And that’s why I do the custom poetry. And then I realized that I needed to pay rent and invest in paper, so I started to charge people. And then as I was on the street, I just kind of got gigs. People would ask me to do custom poems at a wedding, or hire me for a proposal poem. And I was just open to these ideas, and I never said no or questioned whether they would like the poem or not. And I think that energy just attracted things. I’ve done all types of parties, especially being in New Orleans. I’ve done a Youth Cultural Innovator Fellowship in Austria based off my poetry, worked with a few liquor companies like Southern Comfort and Hennessey, I’ve done a TED Talk, just off of being open to the idea. And I think people know I’m not trying to, like, show off my talent, or show off who I am. It’s moreso look at how much poetry we all have. I’m just the translator. 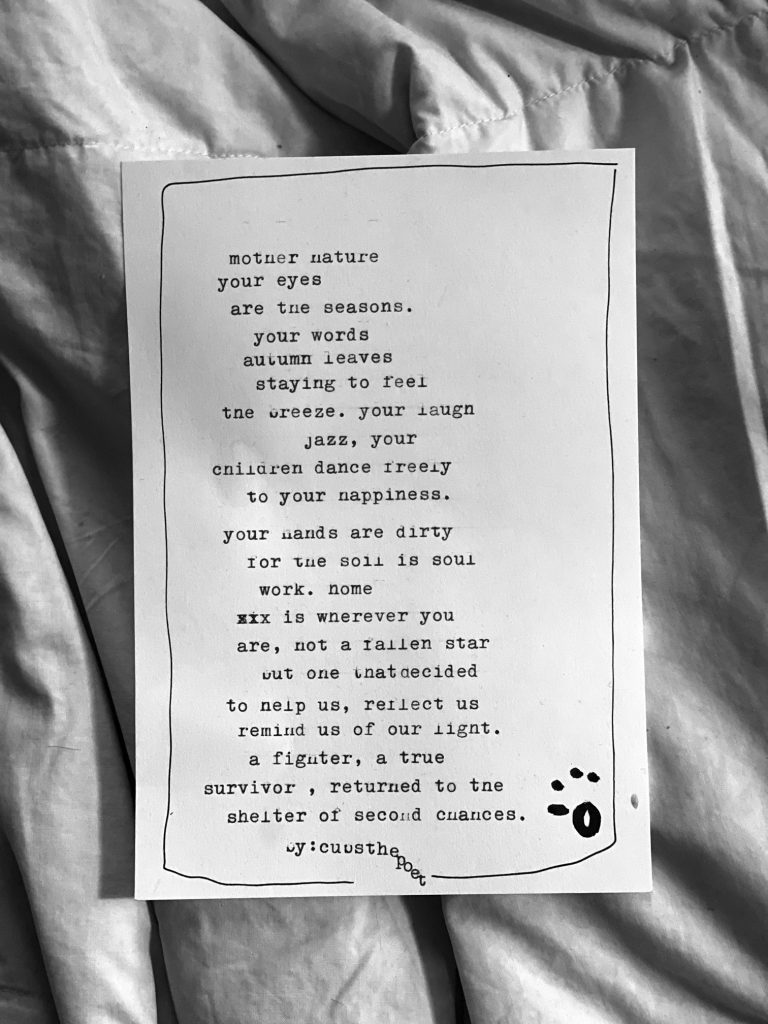 Can you take us through what that’s like inside your mind when you’re acting as a mirror, when you’re talking to somebody with the intention of writing a poem for them?

I’m more focused on thinking and not what to think about. So when people talk to me, I’m listening to their vocabulary. I’m not trying to relate to it, or identify it, or put it in a category. I’m just straight up listening to what they’re saying. I absorb the tone. Like if they say “love” in a certain way—there’s some people who could just say “love.” And the way they say it inspires me to write a poem. And then after I’m done, they’re like, “Oh my God, how did you know I liked flamingos?” But then there’s other people who, you know, say “love,” but I know it’s almost just like they’re using that word as a placeholder. So we have to go deeper. I’m like, “Well, what do you love about yourself?” It’s guiding with questions but never trying to get to an answer. I’ve noticed we all have our day-to-day vocabulary. You know, everybody has a certain amount of words that they use every day to get them through their day. And sometimes I use that. Other times I ask questions that get them off of that and allow them time to think. I’ll ask the question, “If your heart was a fruit, what would it be?” And almost 98% of people say, “I’ve never heard that question.” So then that allows them to think of a different way to speak for themselves. And that’s really helped me in writing this poetry for them.

You’ve got a studio space now, and you’ve added a visual element to your expression with paintings you call “Poetraits.” Can you talk about what Poetraits are and what the medium opens up for you?

Poetraits are the union between poetry and imagery. And basically, after writing poetry for the past 12 years, I have this way of sitting and observing and absorbing people. And as I do this, I basically ask the same kind of questions as if I was writing a poem. And as the people are talking, I start to draw them with this single line. This a blind contour style where I’m looking at these people as they open up. And as I fill in color, their tone and emotion and words help me choose their colors. And I’m recording their voice. So once the conversation is done, I turn the audio into a poem and it’s paired with the portrait. Sometimes, I paint the person, they leave my studio, and I listen to the audio, and it allows me to hear things that I may have missed, which allows me to alter colors or add different colors. So I’m still kind of learning my style and my process. It’s just so interesting how I’m picking up the energies of people when I’m painting them. 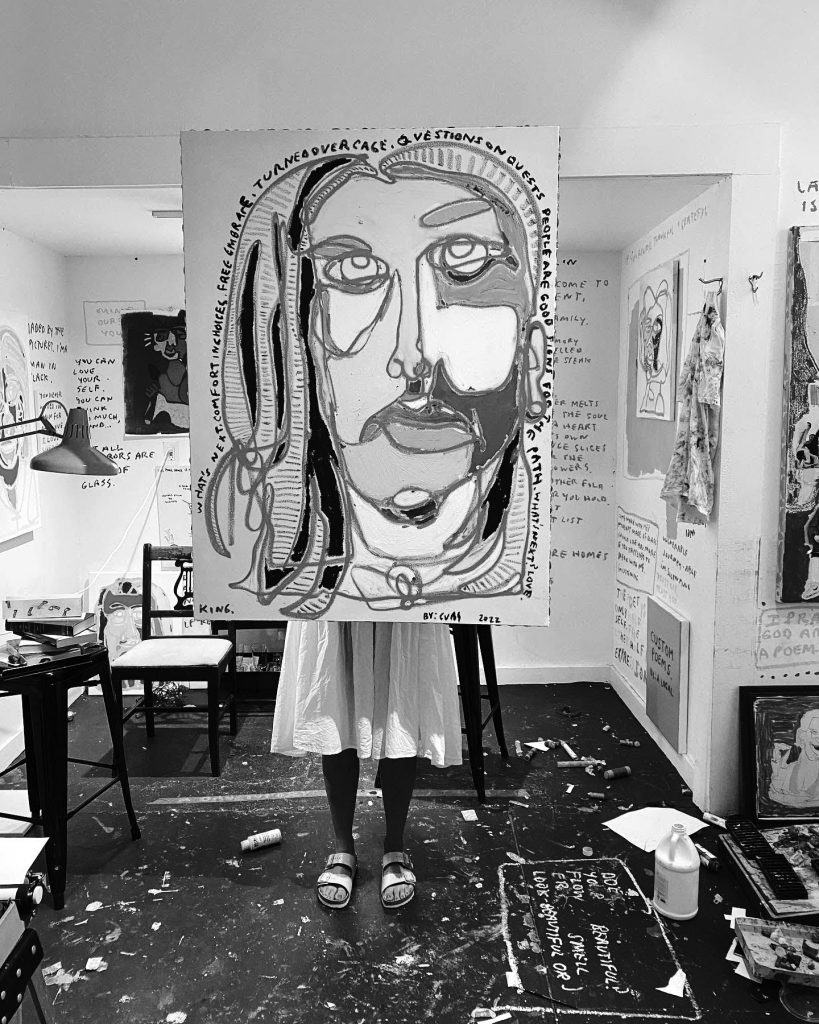 Would you describe it as an interview or more of a conversation? Don’t give away your secrets or anything, but what are you guys talking about while you’re painting?

To be honest, it could be both. It really depends on the person. Some people just come in hot and start talking about their day. I did a couple recently, and they were running late for the session. And they were speeding down the street, and they parked, and my neighbor down the street came out and was fussing at them about, you know, slow down, kids live here. And so they came into the studio, and we just started talking about that. Wherever people are, I try to meet them. But sometimes people have waited months or years to see me and they’re just ready for me to ask questions. And so I’ll ask them something like, “If you had to choose between a door and a window, which would you choose?” And these questions are abstract in the beginning, but as we start to talk, people will realize, “Oh you know, I am shut off,” or “I do like to look out.” So it’s really a case-by-case thing.

Is the studio just purely a working space or are you maybe looking to open it up to people?

To me it’s a gallery and a studio. If you walk into my space and you see a painting you want, you can buy it. I’ve never had my own workshop or studio space, so to me it’s impacted the evolution and how I can expand my style. When I would paint at home, I would have to hurry up and finish because I would do it in the kitchen; and when my family wakes up, I’d have to be conscious of them. But now that I have my own space, I can put a base coat on a canvas and leave it there for like three weeks, and then come back and put an outline and then come back a few days later and change. So it’s just allowing me time to sit with paintings and pieces longer than I’m used to. And it’s just kind of refreshing from my work.

Do you have a name for the space you feel comfortable sharing?

Man. I don’t know if we should do this.

We don’t have to include it, that’s fine.

Well, maybe it’d be cool. If there’s a way to let the people reading this to pick or give their input. But I’m stuck in between two names. One is “Soul Study” and the other is “Poetry Still Matters.” I’m not even leaning toward one. I’m like right in the middle. 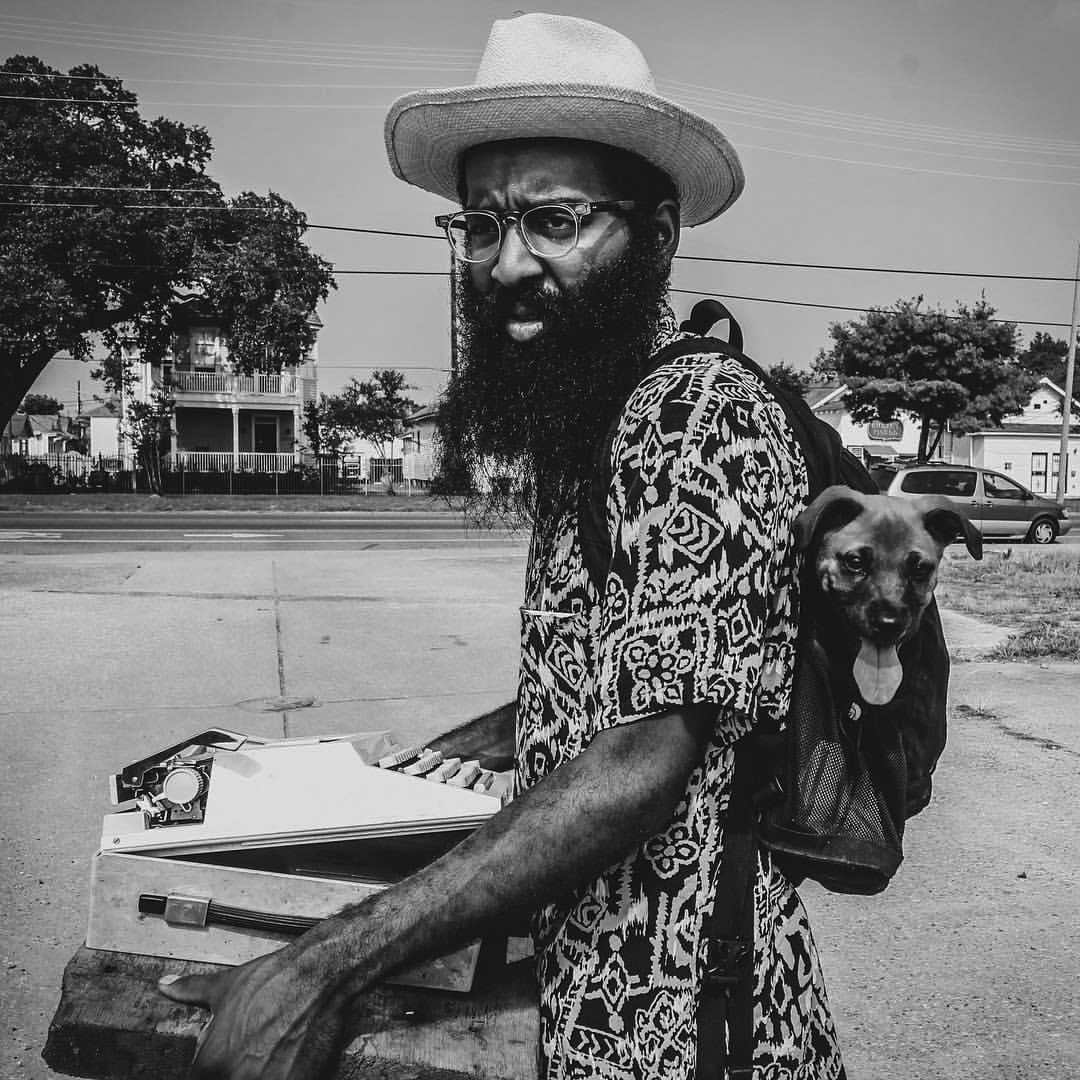