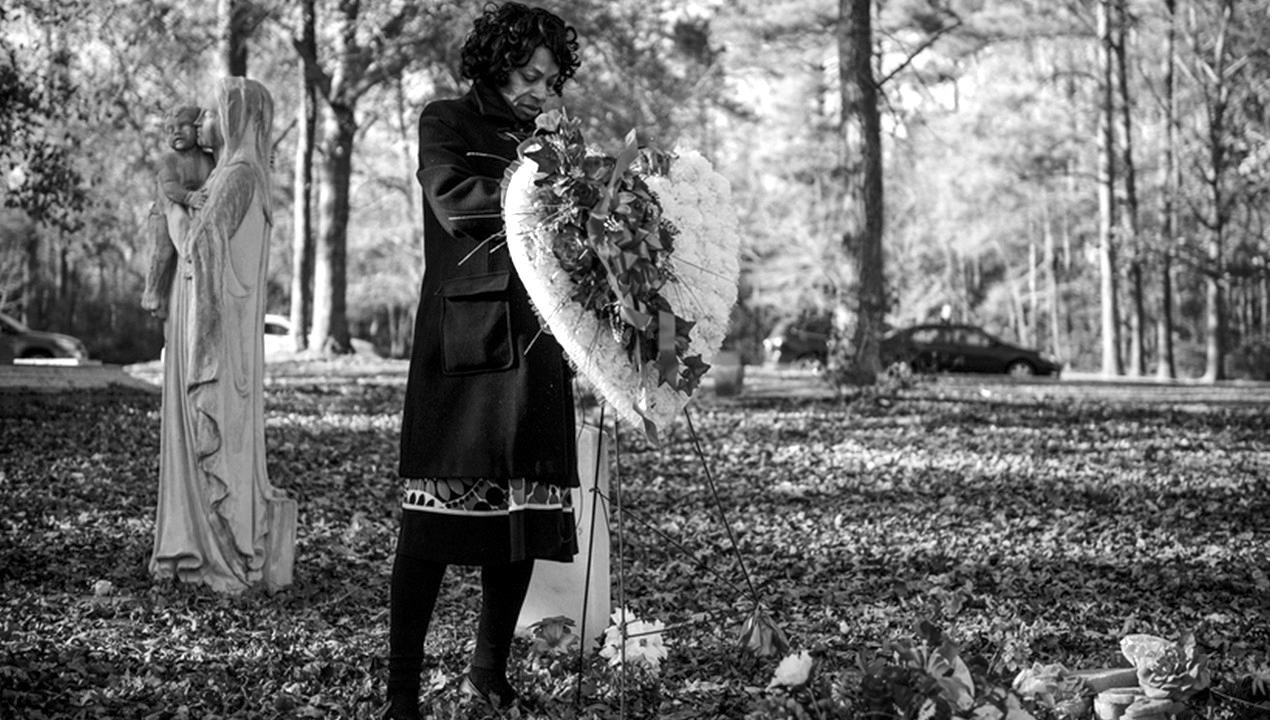 On August 29, 2014, 17-year-old Lennon Lacy was found hanging from a swing set in the small town of Bladenboro, North Carolina. Despite discrepancies in evidence, local authorities quickly ruled his death a suicide. Lennon’s mother, Claudia Lacy, believes he was lynched. In Always in Season, Director Jacqueline Olive follows Claudia on her search for justice, while weaving her story into the larger context of an uncomfortable legacy of American history—the lynching of African-Americans. Throughout the film, Ms. Lacy’s pain is coupled with a similar search for justice in Walton County, Georgia. In 1946, two African-American couples were murdered by a mob near the Moore’s Ford Bridge. Since the 2010s, a group of actors gather to perform an annual reenactment of the lynching near the site of the crime. They hope by sharing this story publicly, the guilty parties will be identified and brought to justice. Actor Danny Glover provides sobering narration, while historical documents and photos paint a jarring picture of the brutality of lynching.

I’m sure this year has been a whirlwind for you. How have the critical acclaim and accolades you’ve received for Always in Season impacted you thus far?

It has definitely been a whirlwind year. Since finishing the film in December 2018, it premiered at the Sundance Film Festival, and there, almost every screening sold out. Some of the people I filmed with joined us, including Claudia and Pierre Lacy—who saw the film for the first time—along with many of the crew members that I’d been working with over the eight years Always in Season was in production. The opportunity to share the film with them on an industry-wide scale and the incredible support over the years from Sundance Institute with the labs, fellowships, and grant funding that the project and I have received made the premiere particularly heartwarming. It was all the more special that Always in Season was awarded the Special Jury Prize for Moral Urgency. Since the premiere, I’ve traveled with the film to more than 35 festivals, and have seen the screenings and panels as opportunities to begin the work our team has been planning around impact and community engagement.

What are some of the most memorable reactions you’ve witnessed from audiences?

Often after the Q&As, people have said the conversations are the first time they’ve been able to talk about racial violence and structural racism in a way that allows for intense emotions to evolve into meaningful dialogue. That kind of response is particularly rewarding to me because, even in the two years I spent researching and developing the project before beginning production, my goal was to make a film that can mirror the dialogues that are essential for deepening our understanding of the impact of lynching terrorism, and can help link people in communities across the country where the violence happened to local resources they can use to work towards racial equity.

You stated one of your hopes is that we as individuals help create a better world by doing our own racial, social, and environmental justice work. Are you familiar with the term reproductive justice? Reproductive justice, as defined by SisterSong, is the human right to maintain personal bodily autonomy, have children, not have children, and parent the children we have in safe and sustainable communities. How is this form of justice connected to your film?

We have the power to make meaningful change in the institutions that were shaped by dehumanization and inequality and sustained by lynching terrorism. I love the work that SisterSong is doing out of Atlanta, and that group of women of color, who are working on many levels for the reproductive rights of marginalized women in the South, is a vital part of the broad racial justice work that the country needs. SisterSong is exactly the kind of organization that we want to offer customized use of the film, along with tools for healing from trauma, and deep-dive facilitated dialogues into an array of issues, like reproductive rights, that come out of generations of lynching terror—from shackling incarcerated, pregnant women who are in labor, to equal access to safe and affordable reproductive medical care. Project editor Don Bernier and I worked to craft a film that would speak broadly to many related racial justice issues and help to inspire audiences to engage around the ones that personally move them—from reproductive rights, police brutality, racial profiling, and mass incarceration, to segregation, gentrification, and more.

Mass shootings and xenophobia are at an all-time high. Hate crimes have been deemed a major public health issue. Yet there seems to be no clear national agenda to address it. Does our nation maintain safe and sustainable communities for its children? If so, how?

When I think of the term “our nation,” I acknowledge that it is made up of millions of people, and that many of those people are working hard to make communities safe for children and increase opportunities for them to thrive. It’s important to acknowledge those intentions and efforts. Also, on an institutional level, across generations, people have successfully pushed state and federal governments to enact and enforce child protection legislation like the Fair Labor Standards Act in the late 1930s. And there’s the work that the Equal Justice Initiative has done to keep children from being incarcerated with adults, for example. Deep work on behalf of all children has been done historically, and efforts to improve the lives of children continue.

There is no question that Black children are often overlooked and ignored when creating and implementing legislation and policies for improving life for youths. The institutions that are supposed to serve our children have often targeted them. Also, historically and now, Black boys—particularly those who are larger in stature—have been treated as adults who threaten the safety of whites. In the film, Lennon Lacy, who was 17 when he was found hanging from a swing set, was thought of as a man by some people there because of his 240-pound frame and emotional maturity. This is not only an impediment to equity for Black boys, but Black girls have also been dehumanized, unprotected, brutalized, and ignored. While men and women were lynched, Black children were victims of the violence as well, and it was often state-sanctioned, whether de facto or officially. Those institutions that were complicit in the violence and benefited from it also have evolved out of this history.

Louisiana is the perfect example of this. We ranked third in the nation behind Mississippi and Georgia for the largest amount of reported lynchings in the U.S. Fast forward to today, and Louisiana continues to be one of the highest ranking states of disparities between whites and African-Americans. What are some plausible systemic and institutional solutions?

A fundamental way to solve the issues of inequality for Black children, and consequently others, is to examine the history of lynching terrorism and extricate white supremacy from institutional missions and processes, while doing increasingly more of the work that we already know will make them more equitable and just. It’s my hope that Always in Season can help transform the lives of our children out of the coalitions that can result from community-driven dialogues about racial terrorism that the film inspires, deepening local and regional work towards repair and reconciliation.