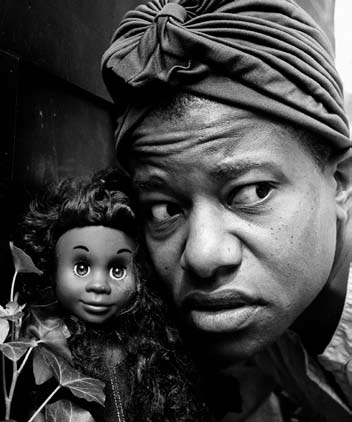 The fresh and fearless Fringe Fest is back for its sixth year. This year features 77 shows, at over 30 venues, a parade with performance “hot spots,” yard art, Family Fringe, a free-for-all lounge with peep shows, spoken word, parties—and expected attendance topping 15,000. I sat down with Kristen Evans, Fringe’s Executive Director, to talk about sneaking into shows, keeping it local and singing manly men.

You always have fun new happenings every year. what’s new on tap this year?

We have a couple completely new things this year. The box office and the whole tent-lounge area is moving into Architects Alley; it won’t be along Press Street. There is a lot in Architects Alley, a private lot (which we cleared  out), so not actually in the street. We can’t have a lot of noise so we won’t have performance there; instead, we are creating new parade “hot spots,” with free performances and stuff going on, like New Orleans Ladies Arm Wrestling, buskers, performers of all types. It is a great opportunity to pull in more people from the neighborhood and push more things out into public spaces.

77 shows this year—how many shows could a person see?
Somebody figured that out and it depends a little on the BYOV [Bring Your Own Venue] show schedule, since they can schedule them any time they want. For instance, we have one show that runs eight or ten hours; you get a ticket and you can just pop in for a short amount of time and once you’ve paid that one time, you can come back and see it any time during that ten hour stretch of time. It’s called Invocation of the Androgynous Muse at Kajun’s, in the backyard. People come and play instruments and there will be painting based on the music that people are playing. So it is absolutely the sort of thing where the audience will meld and blend and come and go and that will shift the painting. With things like that with unusual schedules, the number of shows you can see is maybe in the low 20s.

Do you ever get to see any shows?

The first year [in 2008], I saw maybe five minutes of three or four shows. I was thinking about that today, how you and I and Dennis [Monn, of the AllWays Lounge & Theatre] sat down and chatted that first year, when we had no idea what we were doing and it was becoming a bigger and bigger thing before we knew it. So that first year, I only got to pop in to see a few shows because I didn’t know anything. I ended  up running the box office. It’s very hard to delegate when you don’t know what you are doing. How do you ask somebody else to help? I decided that  the next year I was going to see a lot of shows. I even had a dream that I had a wig and a hat on and going to shows. I was in disguise!

This year we had a 140 applications. A peer reviewer will review anywhere from 30 to 40 applications and each person  has a week to do it on their own time. People have said they feel like they get a pulse of trends. So this year there  is some extremely strong work dealing with race, which is very exciting. We have this piece called City of Bones, which is a solo performance [ by actor Chris Leon]. It is a piece that draws on August Wilson’s work but deals with a hundred year swath of history of African American men and identity. The performer is of Haitian descent and draws on identities from abroad  and here. There is also a group coming from Philadelphia with a piece called Underground Railroad Game. Junebug is doing a piece called Speed Killed My Cousin. And a show called Christmas in Bakersfield which is like a modern day Guess Who’sComing to Dinner: a black and white couple (a gay couple) going home for family dinner. I am really happy that people are doing this kind of work and bringing it to Fringe.

Are there any other themes that  you’ve seen?

We have a lot of really funny women  in the Fringe. There’s frequently this commentary that women can’t be funny, or there is a lack of female comedians. But there are a number of them in Fringe. Shabana Rehman  is back; her show [For Kingdom and Fatherland] also fits into themes of race and identity. She is Norway’s most famous Muslim comic. [laughs] Norway has a large Pakistani population and she has made a name for herself because she is funny. She is little and got on stage with an imam to have a debate about Islam and women. And she went over to him and lifted him up! It horrified him; he started screaming. And so she uses her stories  and comedy to challenge people’s perceptions of identity and the role of women in Islam.

You always seem  to have a lot of international folks coming.

We do get some but we would love to have more! We have a dancer from Brussels coming and he is dancing with Scotty Heron. The piece is called Like

me more like me at the Marigny Opera House. All the things we have seen Scotty do, with poking fun at different roles and making you see things  completely differently and the joy and weirdness of his dance—it seems like with his colleague dancer from Brussels, they have taken it to a new level. Two Scotty Herons on stage.

The Opera House is always a favorite venue.

There’s also a great piece called Gayland that will be there. It is musical theater written by Scott King, who is one of the owners of the Opera House and he writes opera. I don’t know if he has written musical theater before—and this is musical theater, but with very much an opera influence.  It is a world where everybody is gay but there are a few people who dare to be straight, completely flipping the roles. Damon [Rosenzweig, Fringe  Development Coordinator] is working on it and he came back talking about  this song about, “I’m a manly man. And I go out hunting, hunting the deer. And I take it home and prepare the meat. And I make a casserole. I’m a casserole- making man.” Just a lot of light fun musical theater, Gilbert-and-Sullivan type with great voices. Also at the Opera House is Cabaret Macabre, a group from the DC area; it’s a cabaret with dark themes but also very funny, with a big cast.

What’s going on at the Mudlark? That’s also one of my favorite venues.

Pandora [Gastelum] at the Mudlark  is doing another great piece that will be really interesting, with interesting themes of race in New Orleans. She is doing a puppetry show called The Blue Book: A Guide to Storyville. If you were a gentleman (or not a gentleman) going to Storyville, there was this book—the Blue Book—where you could pick your ladies. This is the story of one Creole woman who was considered the belle of Storyville, a true story. The Mudlark  will also be having Butcher Holler Here We Come, the story of miners in 1973 trapped in a coal mine accident in West Virginia. It’s by a group called Aztec Economy; they’ve been involved for a number of years now.

Anything new with Yard Art this  year?

We got some great entries for Yard Art. The Louisiana Bucket Brigade actually put out a call for people to do oil pollution-related art. We had three  or four people respond. I would love for more groups to think about how they can take a platform and use it to move things in the direction they want. If somebody has a theme that was really important to them, they could have an entire Fringe program. Just to use oil pollution again as an example—you could roll in the parade  with that theme, do yard art with that  theme, do a BYOV with that theme.  You could come up with a program and send it out to people who will be interested, like Gregory Gajus a few years ago, who went to Fringe and saw there wasn’t enough queer theater and so he did it, he curated a BYOV of queer  theater. This year they are doing a show at Mister Gregory’s Fast and French, which is his new restaurant, a little  French sandwich shop, right on North  Rampart. It’s called La Matadora. He figured out a way to still be involved in Fringe and will also bring more people into the shop, which is new.

What is Family Fringe up to this  year?

Family Fringe this year is completely off the hook. They have this theme of “Makers,” which is another word for inventors, people who invent things and create an experience for kids to be a part  of. They teamed up with New Orleans  Airlift to have a few tables for kids. Also, Public Labs will be there, who are famous for inventing things that are for the public good. There’s this network of makers fairs; we aren’t officially in that network but same ideas.

There are three! The Rendez-Vous Galant—she is from Montreal; it’s a delightful fun cabaret-ish aerialist show at Den of Muses. Another, called Icarus, is also at Den of Muses. It is the story of Icarus, of course. The woman doing Icarus was in domestic variations [from the 2011 Fringe Fest].

We’ve talked  in the past about the impact that Fringe has had on the local performance scene and community.

Now there are more festivals: SoloMania, in early November; Hell Yes Fest, a comedy festival. I think that  what Fringe has done, in part, is just show that people will come to theater festivals. We had so many BYOVs this year, we have a limit because we physically run out of space in the program. This is the first year we had to cut it off. It’s exciting, but also very sad that we had to do it at all because the whole point is open access. So it was all first come, first serve. Some will do off-Fringe shows—they have been here before and have a following. Now that  we didn’t have enough space for all the BYOVs this year, I am hoping people will start another festival. Why not another fest in the spring? I feel like the Fringe creates a milestone in people’s performance calendars for developing a piece or putting it in a larger run, so if you also have a spring time milestone… it’s just tough to find a free weekend in the spring!