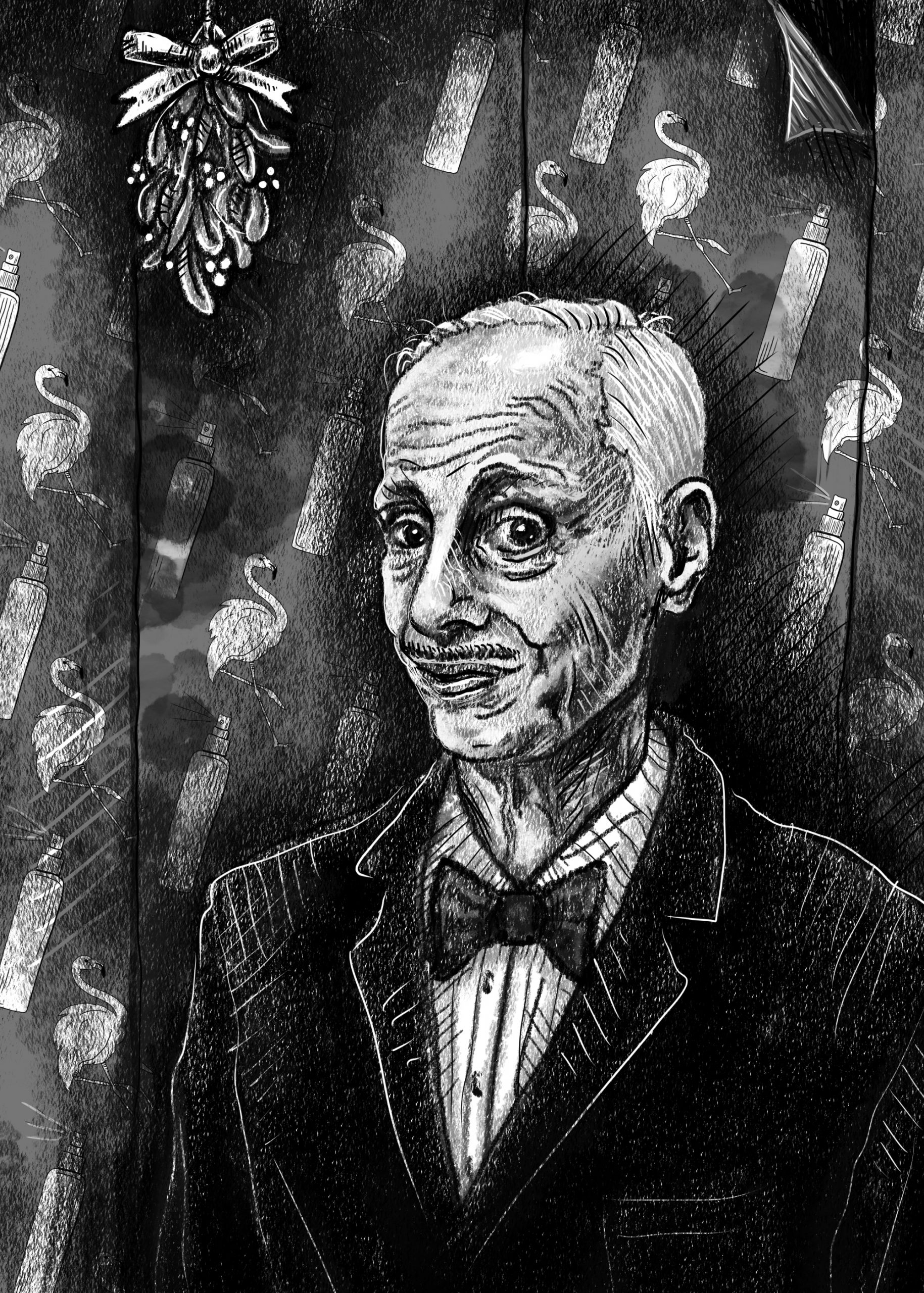 Christmas is perhaps the most ubiquitous tradition in the American zeitgeist. Each year its saturation into daily life encroaches earlier and more aggressively than the last, and each person’s relationship to this season varies wildly. Along with the conventional Christmas staples—Santa Claus, reindeer, carols covered by myriad artists—is another more distinctive: John Waters. Known for his proclivity for boundary-pushing depravity and filth, Waters has also made a name for himself as a Christmas icon, doing Christmas-themed tours for more than 20 years. I had the chance to speak to him ahead of his tour about the spirit of Christmas, the art of gift-giving, and the connection between Santa Claus and fentanyl.

You’ve been doing these tours for a long time. Is there something about Christmas that just feels infinite, material wise? How do you continue to do this tour and feel like it’s new?

That’s a good question—this is the biggest one I’ve ever had. It’s 20 cities in like 24 days or something, which is pretty much a killer. I just finished writing it today. I got two weeks to memorize it. Well, I do it, A) because it’s how I make my living and B) it’s how to stay in touch with your audience, which I think is very, very important. Something’s the matter with me. I have to be on stage ever since I had a puppet show when I was 12 years old. I feel like I’m doing the same thing, going out and scaring the kids. I don’t know, Christmas to me is the opposite—most people have a vacation at Christmas; I’m working. I’m like a drag queen on Halloween, but it’s Christmas. I am working every day.

What’s been the trajectory of the role of Christmas in your life?

I always had a good Christmas. I had a pretty functional family. It was never traumatic, and the things that might have been traumatic to others—like a Christmas tree did fall over on my grandmother. It didn’t kill her, it didn’t pin her under there, but I certainly took that memory and put it in Female Trouble, which is probably one of the most famous scenes I’ve done in a movie. And it is definitely a Christmas scene. So, I think my memories were pretty good. And I remember the neighborhood, we would go down and they would have Santa Claus, and I could see it was the man who lived up the street no matter what he had on. But it was the first time I realized that parents lie to you. And that’s why I think heroin addiction is high. Parents tell their kids about Santa Claus and they don’t believe them, then they tell them heroin is bad for them and they don’t believe that either! Santa Claus is the problem with the fentanyl. It’s not funny! And the parents also tell their children that heroin is bad for you. It is, unless you’re a jazz musician. Then, it’s sometimes good.

We have a lot of jazz musicians in New Orleans.

Well, New Orleans is more drunks. I love New Orleans. I’m happy to be coming back there. It’s a city I once lived in for a very short time. I’ve had a lot of good art shows there—the Arthur Roger Gallery; I like The Corner Pocket. Lots of good reasons to come to New Orleans.

Yeah, your work and you are so committed to the place you’re from, and I feel very similarly being from New Orleans.

It’s a character in your life. But I understand. When people tell me they moved [to Baltimore], I’m like why? I get why you love it if you lived here and grew up here, but I don’t get why you’d move here. But I do talk about Baltimore in my Christmas show—because I think everything’s broken, including Baltimore—and how to fix it. I have a despairing show at the beginning about Christmas, and then an optimistic one from halfway through to the end. 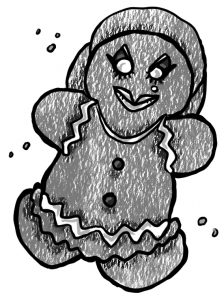 I’m someone that actually doesn’t like Christmas very much.

This show would be fine for you, too! I address all politics on Christmas. Love it, hate it… I understand everyone’s trauma about it—financially, emotionally, religiously—all the reasons. It is great pressure. Everybody in the world, whether you believe it or hate it, you can’t quite ignore it.

I don’t particularly love Christmas, but I do really like digging out the perversion of typically wholesome American customs, which is your whole deal.

[laughs] Yeah. What would you say your definition of the spirit of Christmas is?

The spirit of Christmas—well, privately or publicly? Publicly, it’s going to 23 cities and hell. Hell is flying, and the terrible outfits people wear on airplanes. That is the biggest problem in my life in this coming month. Seeing people dressed in cutoff pajamas at 70 years old on an airplane. It makes me want to duct tape them to the seat myself. I wish I had my own roll of duct tape because you wouldn’t be able to get off, you’d be duct taped to your seat. Get the fuck dressed. But Christmas otherwise, I have a good Christmas. And it’s not about presents. It’s not about how much people give you or what it’s worth, it’s about how much time they spent looking for it. You can have the best present in the world and it cost a nickel because it was something they searched in a bin in a thrift shop found near the Soho area. Presents that cost too much money are actually tasteless, and it means you have no taste because you thought money would make up for it.

That’s why I don’t like the commercial aspect of Christmas. But I do really like what it brings out in the spirit of giving, and having to think, “What would this person really like?”

And another thing you can try: We used to have a party where each person drew someone’s name and you had to give them the present they would hate the most. That’s pretty fun.

[laughs] I might actually try that, that sounds great.

It makes for a good party.

I got all the Rocky soundtracks. I threw them out the window on the high rise, which maybe wasn’t a good thing to do on Christmas. But that was on purpose. The worst thing I’ve given? I don’t know. They didn’t tell me. I guess you could give somebody a gift certificate to a bar and you didn’t know they just joined AA. There’s all sorts of faux pas you could do.

We actually did an interview with you when you were doing your 2013 tour and you talked about being against the government supporting Christmas. I feel like every year I hear more and more “War on Christmas” stuff.

I haven’t heard much War on Christmas stuff this year, have you?

Yeah, it used to be they didn’t start putting decorations up until Thanksgiving, now it’s Halloween, and pretty soon it’ll be Labor Day. The War on Christmas—I mean I have a lot of jokes about Christmas, about the religious aspect, the commercial aspect, but that’s not war on Christmas. You are partaking in Christmas by buying a ticket to come to my show, as long as you have a sense of humor about it. I do sing a Christmas carol in this one, a really filthy one, that I made up just for you.

My most traditional is that every year—I have two sisters left, my brother unfortunately died a while ago—we go to their house and make a big Christmas dinner. That’s probably the most traditional. I guess the least traditional—traditional to me—but the electric chair that Divine got fried in in Female Trouble is in my house and we decorate that as a Christmas tree.

You can’t even tell it’s an electric chair once it’s decorated.

Do you spend Christmas around many children?

I like children! More Thanksgiving, because I go to my sister’s in Virginia, and there’s me and nieces and nephews and grand-nieces and nephews, and I bring all the swag. There’s little children walking around with “Christmas Bottom” t-shirts on—they don’t know what it means, and I forget sometimes that I’m handing out something that’s filthy to them. Kids like me. I am crazy uncle John. I remember one time we were having some family function here, and I said to my cousin, “You can stay at my house” and he said, “Oh, I’d be scared! I’m not staying there.” It looks so normal to me, but…

“Kiddie Flamingos”: Will that ever get a wide release?

I don’t think of it as a film; that was an art piece in my art show. The only way you’ll ever see it is in a museum. No, it’s not a film. It’s an art piece that should be in a video room where you can walk in on a loop while it’s on. I’m proud of it, and I like it, and the Baltimore Museum owns a copy, so if you ever want to see it you can go there.

Gotcha. So what’s the most tantalizing, non-spoilery teaser you can provide for people coming to your show?

Well, I talk about how my films could be canceled and the woke version of each one. 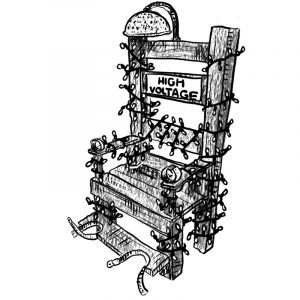 John Waters will be performing his annual Christmas show “A John Waters Christmas” at the Civic Theatre on December 11.