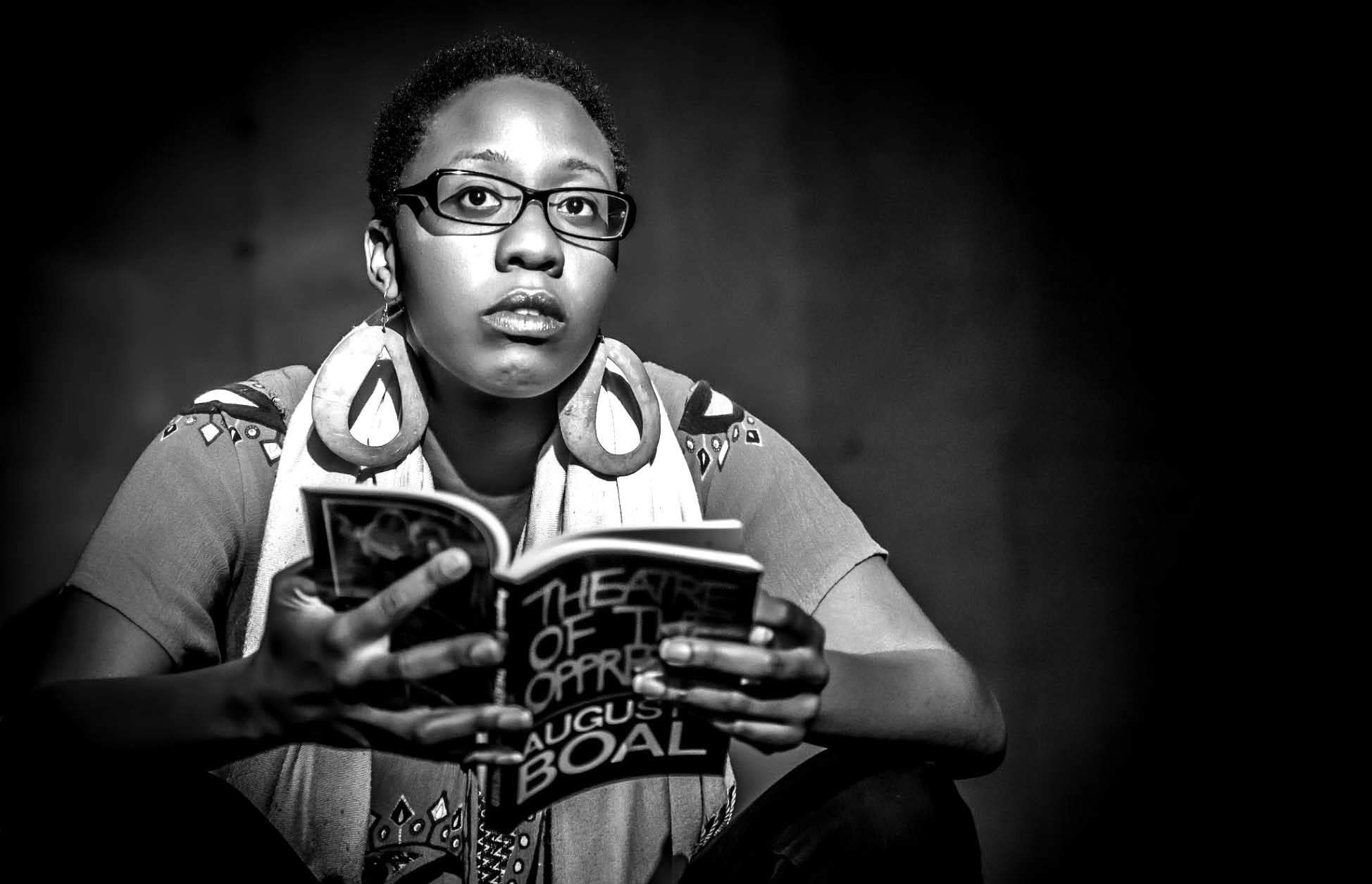 ROOTS Week, an annual gathering of artists from around the South, is always full of surprises. At dinner one evening, the clamor of conversation in the cafeteria was suddenly interrupted by a boom box playing Lady Gaga’s “Born This Way.” One by one, people of different ages, races and abilities started dancing around the room. Some had been planted in the crowd; others just joined in spontaneously. This loose flash mob had been planned earlier in the day during a workshop about ableism, as a reminder that we can all dance and have fun in our bodies just the way they are. It was one of many performances, some spontaneous and others carefully planned, during a week of exuberant creative expression and relationship building. 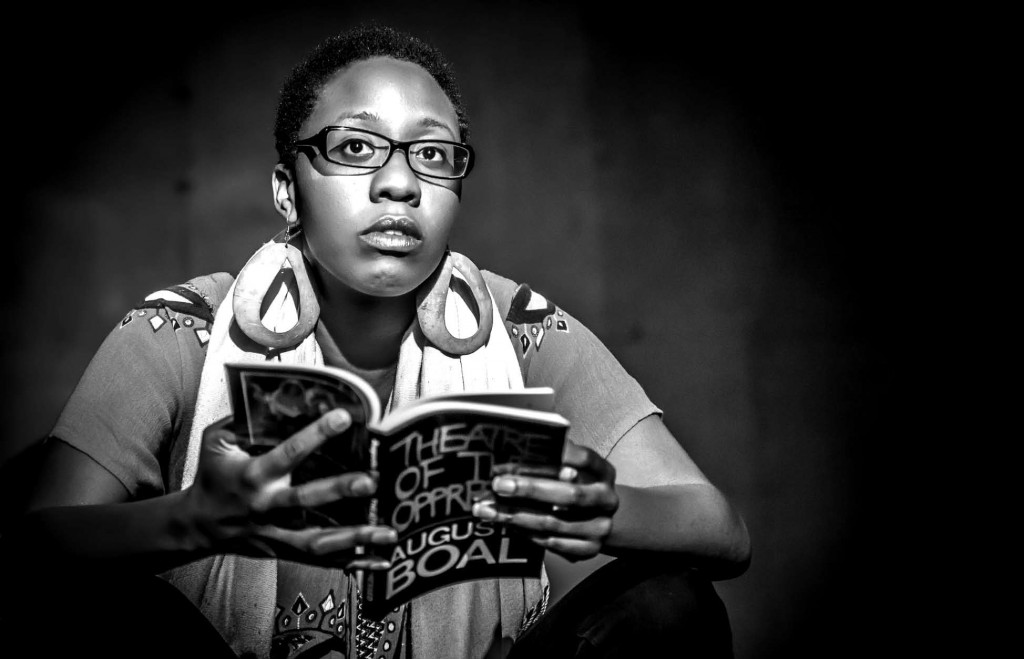 Alternate ROOTS came into existence 37 years ago at the Highlander Center in Tennessee, when a handful of theater makers working at the intersection of arts and social justice in the South gathered to share their work and get to know each other. The group continued to meet each year and expand beyond theater to include visual artists, filmmakers, poets, musicians and more. It also honed its focus to specifically include eliminating all forms of oppression, with an emphasis on undoing racism. ROOTS offers services to members year-round, including mentorship and funding for innovative community-based projects. It’s during the summer, however, that the energy of ROOTS coalesces at an idyllic campsite in Arden, North Carolina. Over 200 people from around the South gather for a week to learn from each other, meet kindred spirits and share their work.

After a summer of headlines about racial injustice, ROOTS Week was a space for healing, reflecting and thinking about how to move forward. Sessions included a town hall meeting about the Trayvon Martin verdict, a story circle with veterans of the Civil Rights Movement in honor of the 50th anniversary of the March on Washington, and workshops on strategically addressing structural racism with facilitators from the Applied Research Center. There was also reiki energy healing and bodywork available and powerful performances by Body Ecology, Zoe Flowers and Jasmine Coles about how racism impacts women of color.

More than 20 artists, organizers and culture workers from New Orleans were present at ROOTS this year, with four groups from New Orleans performing. This was not a coincidence. The performing arts community in New Orleans is deeply interwoven with the culture and history of ROOTS. John O’Neal, co-founder of the Free Southern Theater and Junebug Productions, was an original ROOTS member and a teacher of many artists and organizers currently working in New Orleans. Although he was not present at ROOTS Week this year, his legacywas felt through a performance of LOCKDOWN, an original play about race and education in New Orleans that was presented by Junebug. The piece, which addresses the privatization of schools, mass firing of veteran educators and push out of students into the school- to-prison-pipeline captivated audiences at ROOTS much as it did earlier this year in a successful run at the Ashé Cultural Arts Center and was followed by a vibrant discussion about how these issues are impacting people around the South.

NEW NOISE, another small New Orleans theater company, also reprised a performance from earlier in the year. Runnin’ Down the Mountain is an original play about cultural loss in Appalachia that was presented last year at the Dryades Theater. NEW NOISE remounted the piece in a scaled down version, focusing in on original music and soundscapes. According to company member Bear Hebert, “the supportive environment for receiving feedback pushed us to more deeply consider the thematic questions we’re grappling with in the piece.” NEW NOISE plans to tour this “house party” edition of the play around the country in coming months.

Other performances featured work that has yet to premiere for New Orleans audiences and offered a taste of what’s to come this year. Rebecca Mwase performed a preview of her new solo performance, Looking at A Broad. Fresh off a residency in Amherst, MA, Mwase has been developing Looking at A Broad with director/co-writer Ebony Golden and choreographer Audrey Hailes. The piece uses music, movement and prose to explore black female identity through experiences of travelling abroad. Mwase is currently raising funds independently for continued development of the work and an eventual performance in New Orleans.

Back in the cafeteria, Mondo Bizarro and ArtSpot Productions co-presented an excerpt from Cry You One, a processional performance about coastal land loss in Louisiana. The actual performance, coming this October, will take place outside near the Central Wetlands in Lower St. Bernard Parish and will take people on a journey that illustrates the coastal land loss picture in Southeast Louisiana. The performance at ROOTS Week was scheduled to take place outdoors as well, but when it showed signs of raining the artists rolled with the surprise and reconfigured their work to fit inside the cafeteria. According to Nick Slie, one of the performers and a Mondo Bizarro company member, performing at ROOTS is a rewarding experience because audiences consider both the artistic quality of the work and its impact in the world. “At ROOTS, many of the people who attend are mentors and deep practitioners in the field of art and community engagement,” says Slie, “Performing for people you consider your teachers keeps you on your toes and invites your best work.” Despite surprises and setbacks, the Cry You One artists brought their best work to ROOTS week. With dining hall tables carefully rearranged the performers, dressed in white from head to toe, guided over 200 people through a heartbreaking remembrance of what Louisiana has lost–– in terms of land, culture and a sense of home. After a gut-wrenching monologue from St. Bernard resident Monique Verdin, the performance ended, as so many things do at ROOTS Week, with a moment of communal dancing.

For more information  on ROOTS week, check out alternateroots.org