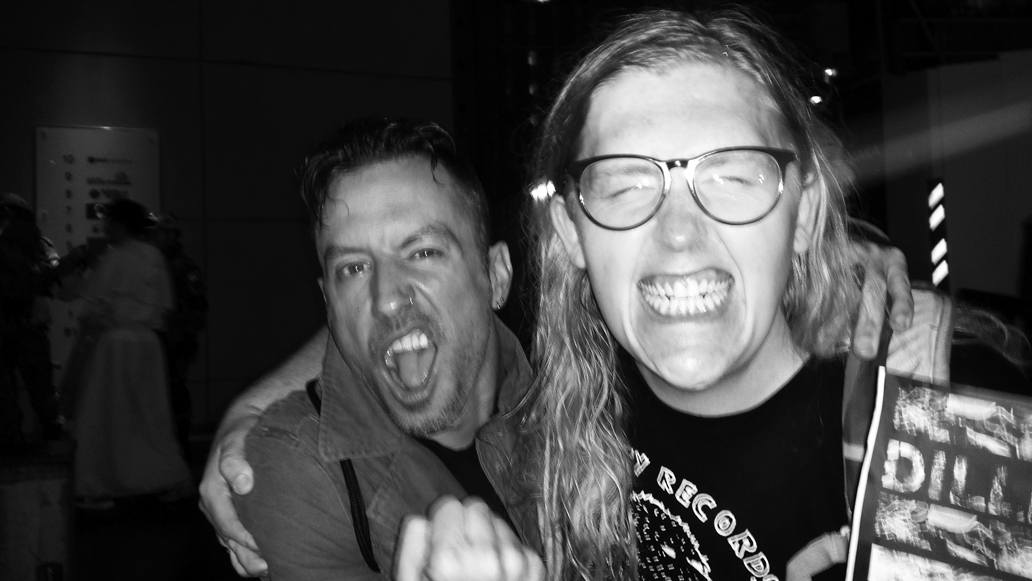 At the end of 2017, the Dillinger Escape Plan ended their two decade career and dissolved into nothingness. The group’s two Tokyo shows, the only dates in Asia on their final tour, were among their last six shows ever. Cyclone, the room that hosted their last show in Tokyo, starkly contrasts Terminal 5 in New York, where the band held three monumental farewell shows at the end of December. Cyclone’s size is more comparable to a neighborhood coffee shop than a venue, struggling to cram in all 300 attendees. It’s easily one of the most intimate shows of the tour, and was their last scheduled performance in a room this small.

My face becomes pavement as people trample over me on their way to the stage. It’s as if Shibuya crossing—Tokyo’s busiest crosswalk—has been temporarily relocated directly above my head. This is my introduction to the Dillinger Escape Plan’s concert at a very small room in Tokyo—one of their final shows ever. Immediately, it becomes a race to see who can climb over heads to reach the front of the room the fastest. The first notes of “Prancer” slash my ears like a razor. Abruptly, the music pauses. An intense mixture of tension and suspense engulfs the room like a thick gas. When the band kicks into full swing, the crowd explodes as if the group just sparked a match.

It genuinely feels like everyone is willing to die tonight, including the band.

Seconds into the show, vocalist Greg Puciato propels himself into the audience, wasting no time getting intimate. Shoving his face into the crowd, Ben Weinman violently swings his guitar as his hands bash down on the strings. I’m certain that at any moment I will be impaled by the headstock. Moments later, I’m latching onto his legs, attempting to stabilize him as he stands in the crowd mid-song. Throughout the night, Puciato forcefully pulls people out of the rolling tide of crowd surfers to share the microphone with him. The language barrier and cultural differences between band and crowd cease to exist as everyone becomes one.

Over the past two decades, Dillinger has earned a reputation for intense live shows built around loosely organized chaos. Band members routinely break bones in acts of unplanned acrobatics during concerts. Their set at Cyclone does not disappoint on that front. They play simultaneously with the recklessness of 20-year olds and the refinement of 20-year veterans.

In a rare moment, Puciato, drenched in sweat, walks off stage. The intense atmosphere momentarily subsides as the band runs through “Weekend Sex Change,” a short but graceful instrumental. Suddenly, the band bursts into “Sugar Coated Sour,” hitting the room like a high speed train. 18 years after it first appeared on Calculating Infinity, their debut album, “Sugar Coated Sour” still weighs heavy with a jarring urgency. Even by today’s standards, it’s a vigorous assault. Towards the end of the song, Puciato climbs on top of a nearby speaker and pleads for someone to give him something to drink. For the following tune, he camps out on the speaker, slowly sipping an audience member’s beverage.

Dillinger last journeyed to Japan in 2008, and their fans here are painfully aware. At Cyclone, the crowd unleashes the near-decade of unresolved tension and energy they’ve collected since the last time the band performed here. Their plans to break up only amplify these already powerful emotions. The few foreigners present are equally extreme fans, traveling from Korea, Australia, and even the United States to get a final glimpse of Dillinger. I’ve never experienced a crowd so intense in my life. It genuinely feels like everyone is willing to die tonight, including the band.

At one point, Puciato crowd surfs to the back of the room to climb a balcony, only to be joined by an equally crazy Japanese fan. A grin of admiration flashes on his face, and after a few swift moments, the two crash back down into the crowd. At the end of encore-closer and cult classic “43% Burnt,” drummer Billy Rymer rushes towards the crowd, smashing a cymbal down against people’s faces. Deafening feedback floods the room. “This is one of my favorite shows we’ve ever, ever, ever played,” shouts Puciato. Whipping his arms in an adrenaline-fueled rush, he continues: “All you guys are the real deal. This room is the real deal. Tokyo, Japan: You’re the real fucking deal. Thank you.”

Minutes pass, but very few people leave the room. Even as the house music blares, fans continue chanting for an encore. No one can accept that it is over. We all want to hold on to this moment just a little bit longer. Slowly but surely, we start to shift out of the room. As I walk past the backstage area, Puciato glances at me and quickly shouts “Where the fuck are you from?” When I respond with New Orleans, he warmly recalls, “What was that venue we used to always play? Shim Sham? Those shows were insane.”

The band eventually emerges from Cyclone, and a small group of fans engulf them, hoping to capture a final moment before this dying star finally implodes. After a few minutes of interaction with fans, Puciato launches into a sprint for the band’s hotel. “Hurry up!,” he yells, taunting a very persistent Japanese autograph hound who has been chasing the band for the past two days. He escapes into the piercing neon lights of the Shibuya night as the fanatic races after him.