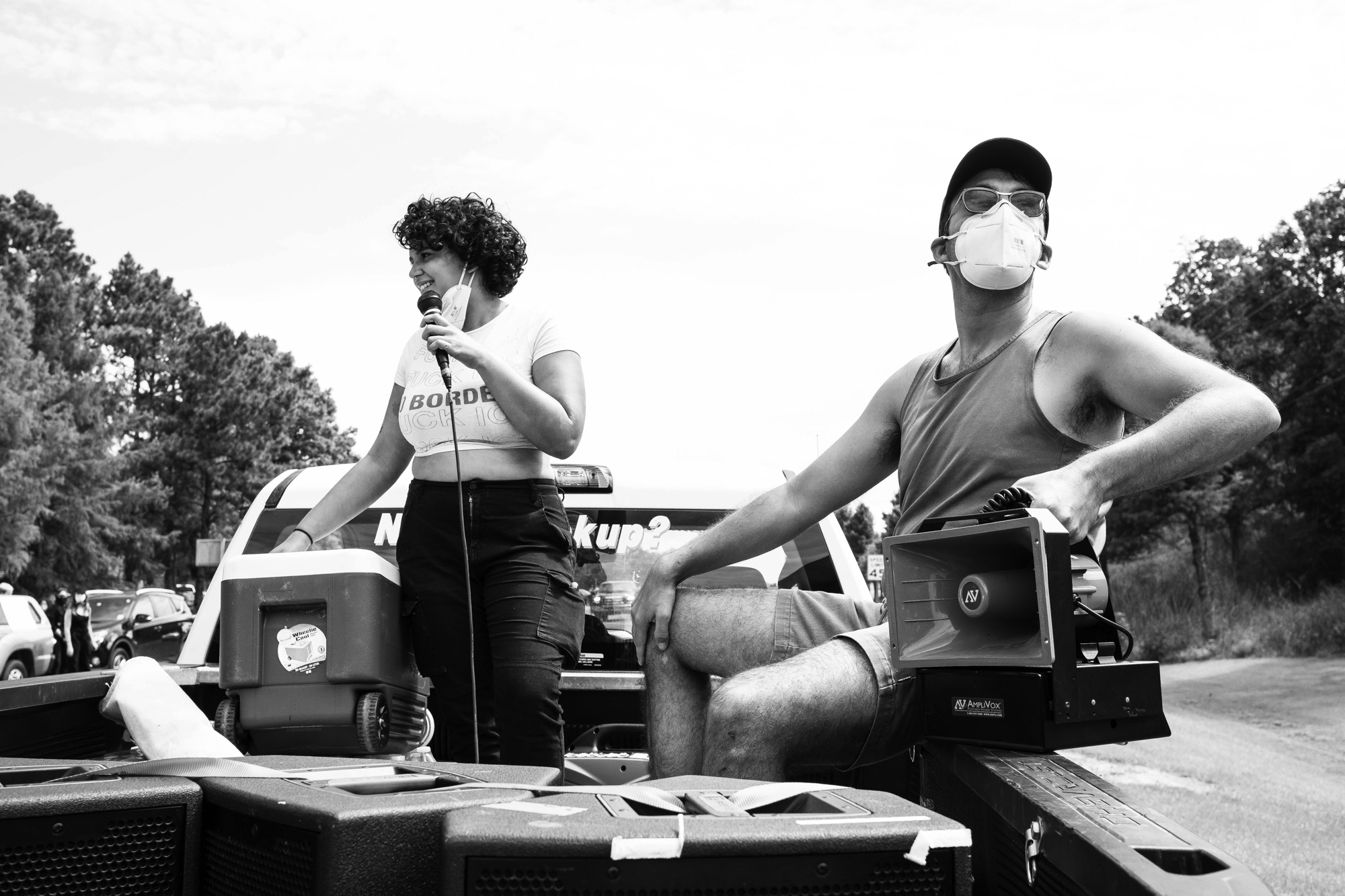 On Friday, August 14 a motorcade organized by the New Orleans Workers Group travelled to central Louisiana to protest the detention of migrants, including a group of 40 African asylum seekers on hunger strike, who are being held at the Pine Prairie ICE Processing Center, a privately-run facility operated by The GEO Group. In addition to protesting the very premise of borders, the criminalization of human migration, and the inhumanity of cages, the group had heard disturbing reports from Pine Prairie in particular of pepper spray being disseminated via air vents as retaliation for the hunger strikes. The motorcade included three photographers who regularly contribute to ANTIGRAVITY. The following is their verbal and visual recollection of the day’s events. 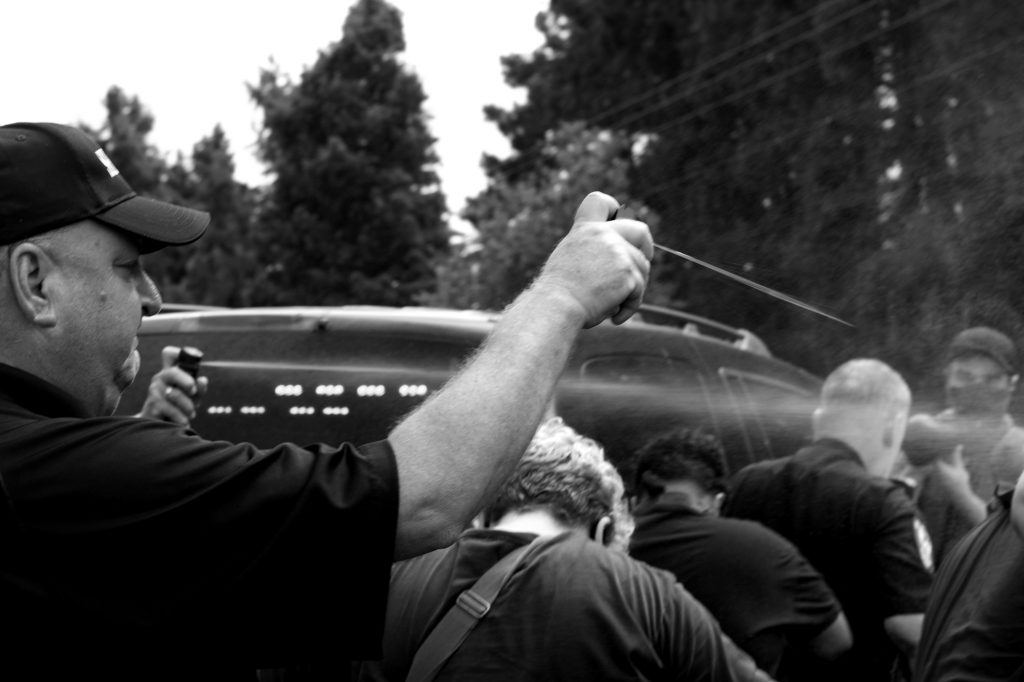 We left a little after 1 p.m. in a caravan of 30 cars from the Walmart parking lot in Ville Platte. Some Ville Platte cops told us we had to disperse, that we needed a permit to continue because we were considered a parade. Sixteen miles later, me and my two companions arrived at the detention center, a drab-looking building obscured by pine trees. As we passed the front entrance of the facility, I noticed the entryway was heavily fortified by police. They knew we were coming. We continued past the entrance, turning right into a church parking lot, where we regrouped, then parked alongside LA-106.

We marched along the edge of the road toward the detention center, following behind a U-Haul truck with members of the New Orleans Workers Group. One of the organizers raised a megaphone to their lips: FREE THEM ALL. FREE THEM ALL. Passing drivers looked on, slowing to observe the commotion. We marched until we were directly across the street from the detention facility. 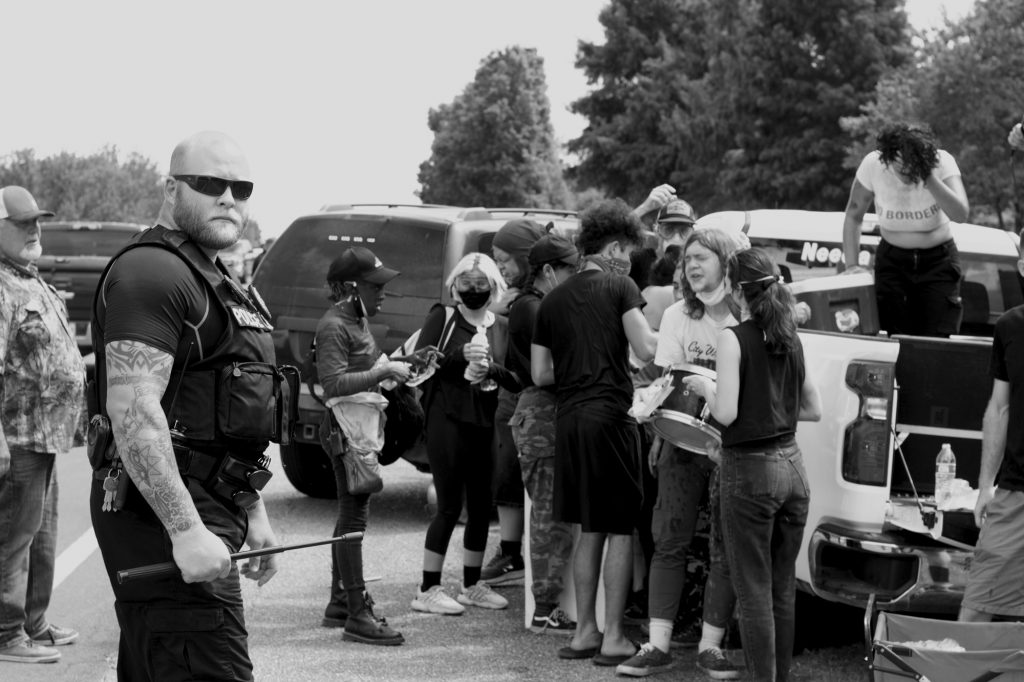 Eyes obscured by dark shades, one cop mean-mugged the crowd as he paced back and forth, clutching his baton. I was terrified of his presence. He stared down protesters with their fists held high. The sun glared down on us and we chanted: FUCK ICE. FUCK ICE. The police pepper sprayed us, but their tactics only strengthened our resolve. I watched protesters attend to the medical needs of those who had been doused with pepper spray and tried to understand what I had just witnessed. The cops instructed protesters to back away from the street. FUCK ICE. FUCK ICE. The protesters would not stand down.

Later we made our way as a group back to our vehicles. At first it was just a faint banging sound, as if against a window pane, but gradually getting louder. Then through the pines and barbed wire fence, I saw it: a small window alive with the arms of people, migrants imprisoned in that facility. With each bang on the window we cheered louder and louder, motorists beeping their horns, our applause explosive, sending messages of love. With every call and response, it felt as if the walls of the detention center would collapse. —Jason Kerzinski 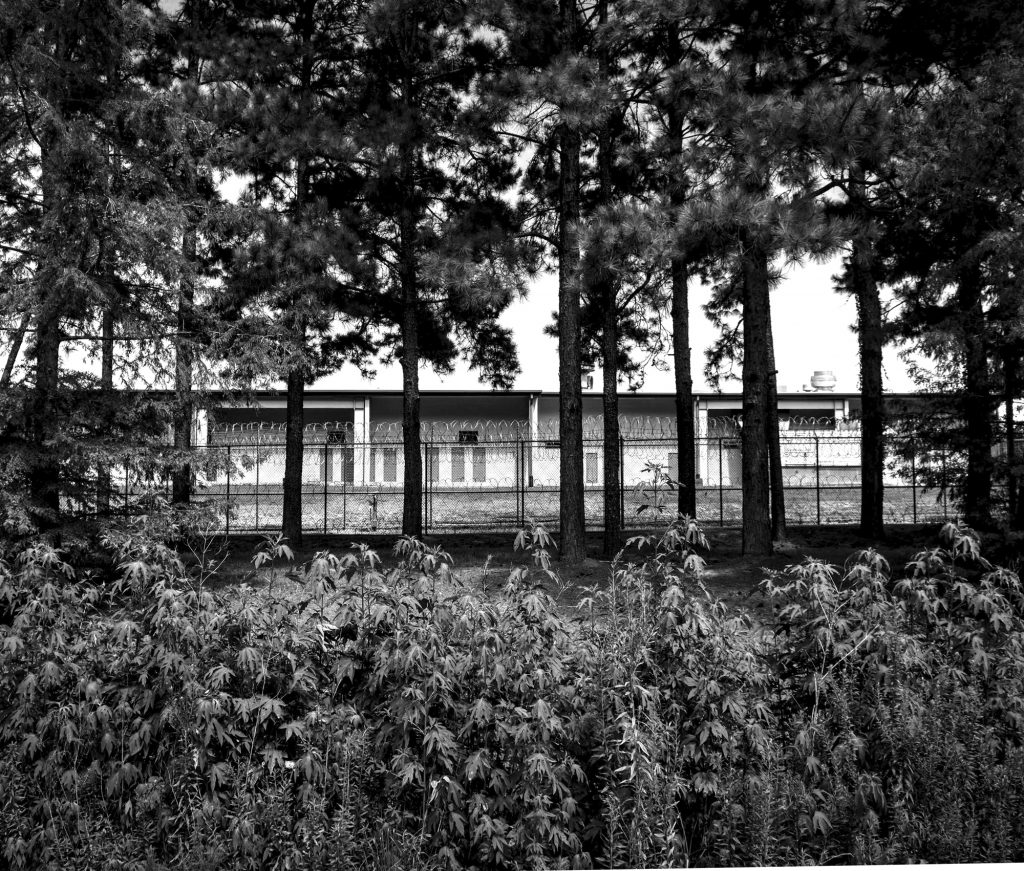 We set out with goals named by the New Orleans Workers Group: to demonstrate solidarity with Cameroonian asylum seekers on hunger strike as well as all detained people, and to help the hunger strikers break out of their isolation in order to call attention to these crimes against humanity. These goals were achieved that day, though not without enduring excessive violence from police and taunting from right-wing locals. The aggression exhibited by these groups on the day of the solidarity action illustrates the ever-deepening divisions of the perceived realities of people in this country, as well as the continuous suppression of our rights to freedom and assembly. I’ve been present at many rural direct actions as part of the campaigns against the Bayou Bridge and Keystone XL pipelines. Typically the local police in these small towns have never before encountered anything like a caravan of protesters from New Orleans rolling up to their parish to disrupt business as usual. Sometimes their response is sheer confusion; sometimes that confusion results in extreme hostility and force.

For nearly an hour, the police tried to keep us from even getting close to the detention center. But those who came to show solidarity with hunger strikers managed to assemble on the side of the road across the street from the ICE facility. Organizers led chants through megaphones while others held up signs reading “¡Ningún humano es ilegal!” and “You Are Gassing Them / We See You.” Mere minutes after the group assembled, the cops got aggressive. An organizer yelled out, “deescalate!” The cops’ response? To immediately start pepper spraying as many people as they could, while pushing the crowd and gripping their batons. Our medics assisted with those who had been pepper sprayed. Protesters stayed united and avoided arrest. 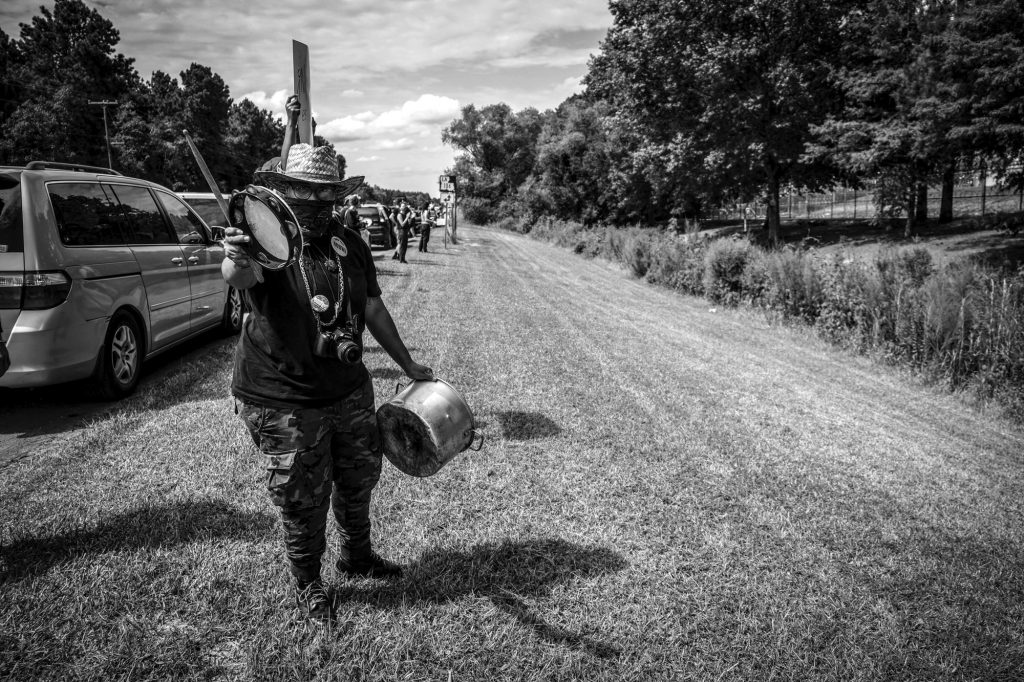 Not backing down, the group gathered directly across from the ICE Processing Center to continue to shout messages of solidarity to the people inside. And the people inside—they shouted back. 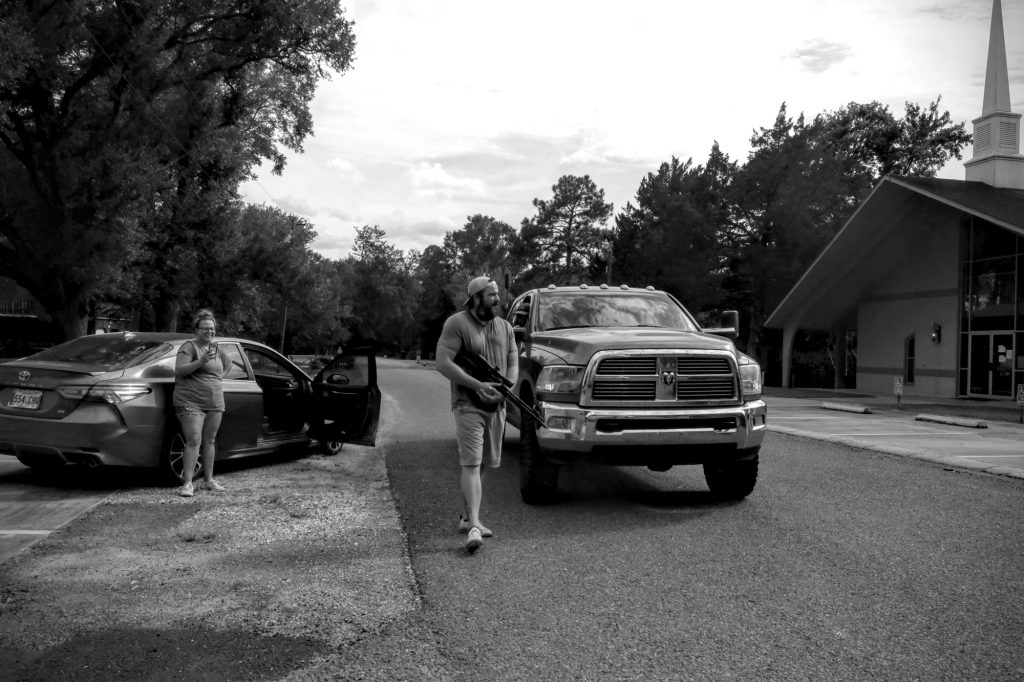 Other local characters who showed up to the scene included a white man on a motorcycle who kept circling and trying to intimidate the caravan by yelling at us to “get the fuck out.” Another man posed with a giant gun, and yet another bearded middle-aged white man fiercely clutched a “Trump 2020” flag in his hand, screaming, “I’m doing this, bitch! I’ll fucking put a bullet in your fucking head!” It’s a population like this that makes Pine Prairie not just a place where an ICE facility can safely exist, but will even be defended.

We cannot continue to let ICE get away with this level of repression because they think that no one is paying attention. We must continue to demand the migrants’ immediate release, a halt to ongoing deportations, and that Oakdale Immigration Court Judge Scott Laragy be condemned and investigated. No human is illegal. We are watching. —Laura Borealis 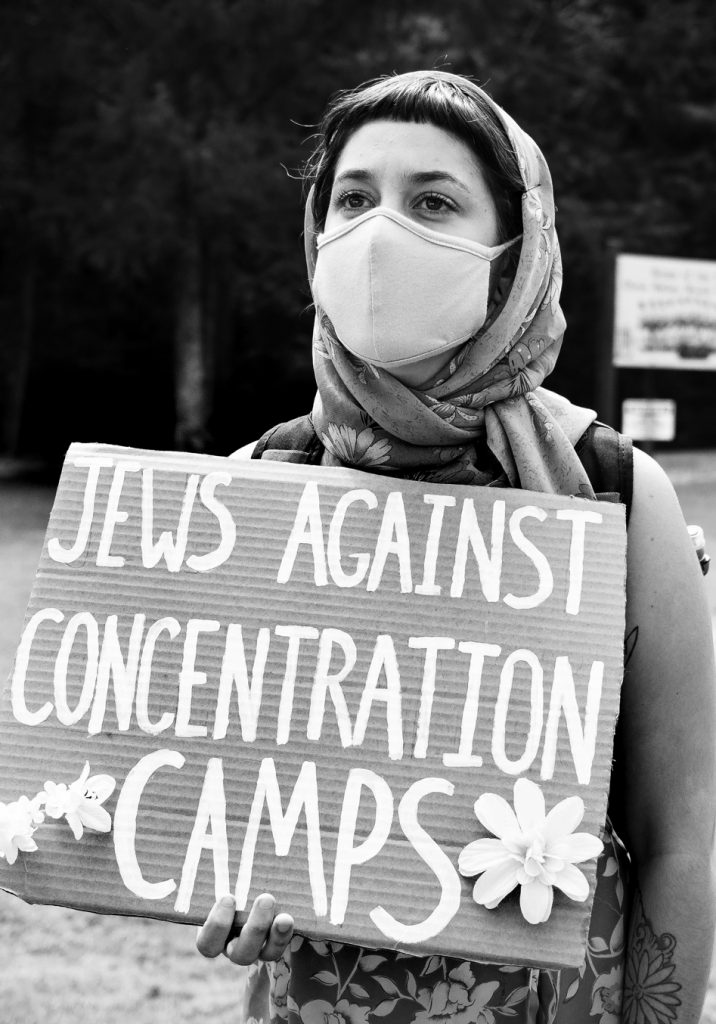 On our way to the camp, roads were blocked by multiple police trucks, forcing us to take an alternate route. We collected ourselves and decided the best course of action would be to park off-road near the entrance. We banged on pots, honked our horns, and screamed in support of our migrant friends—and were immediately met with hostility by local, state, and parish police officers. They ran up to the U-Haul and tried to pry the driver out of the truck. Officers punched protesters, even grabbing one by the neck and punching her in the face while she was caught in a headlock. Many of us were attacked and pepper sprayed. Our motorcade rushed to our side, providing us with water for our eyes. In that moment, unable to see, I knew that I was proud of what we were doing. I knew that no pain I would face today could match the pain of our migrant brothers and sisters trapped in camps around the country. In this moment I remembered the stories of my family burned and gassed in camps across Europe by the Nazis.

The pain was worth it. Inside the detention center, migrants held up signs showing they heard our support, as they banged on the glass behind barbed wire fences. When I could open my eyes, disappointment and horror flooded my senses. Pine Prairie residents stood side by side with the police who had just assaulted us, holding Trump flags proudly and sporting assault rifles. We collected ourselves and made a game plan to meet up at a nearby church. One band, one group, and one sound—that was our mission. Without even a moment to breathe we were blocked into the parking lot by rifle-wielding citizens screaming racial epithets. Our cars were surrounded. The burns on my body faded from my awareness as tensions grew hotter. Worry crept into my psyche. I’ve never experienced such hate before. Spitting as they promised to put bullets into us, I wondered if we would all be able to stick together.

Towards the highway we went, battered and bruised. Our motorcade crept down the road. Other than the sound of hazards flashing, my vehicle remained silent. Many of our cars needed gas to make our three hour journey home, but police from every town within a 20 mile radius had blocked off every gas station. But we made it to the interstate and found a place to fill up, then made our way back to New Orleans. This fight is not over. —Matthew Seltzer